In Photos: Students Fight Back During Jamia's Year of Rebellion

The campus had a political awakening during the past year, holding three significant protests.

New Delhi: From the graffiti on the Jamia Millia Islamia walls to the students chanting slogans throughout the day on the streets of Jamia, everything suggests that there is currently an air of revolution in the university.

For the past 15 days, Jamia students are out on the streets, protesting what they call a “discriminatory” and “divisive” law, the Citizenship (Amendment) Act (CAA). The police brutality on the students, in which many were injured and one student lost an eye, has only made their chants louder. What was supposed to be a peaceful march from Jamia to Parliament house on December 13, has now sparked off a nationwide protest against the CAA. The march, however, was never allowed to be taken out as the police blocked the protest route and lathi-charged students trying to get to the other side. 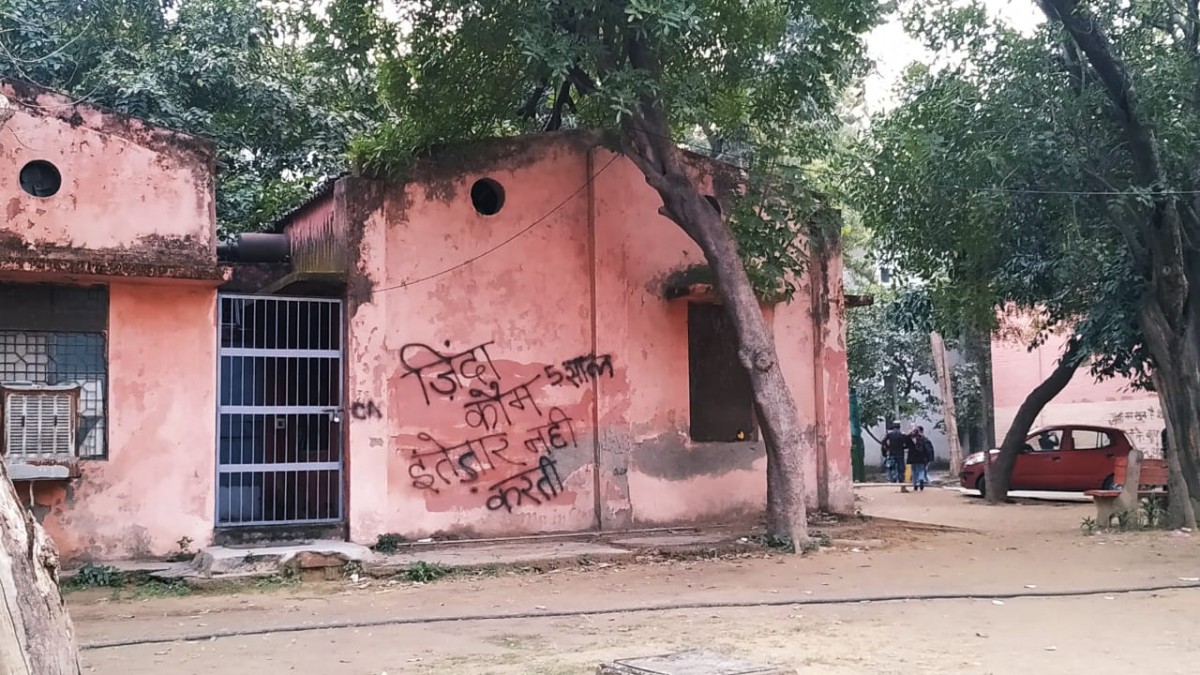 For Jamia, this year has been one of rebellion and protests. Three moderately successful protests at a university without an elected student body suggest that the students are politically aware and that politics is an integral part of any university space. 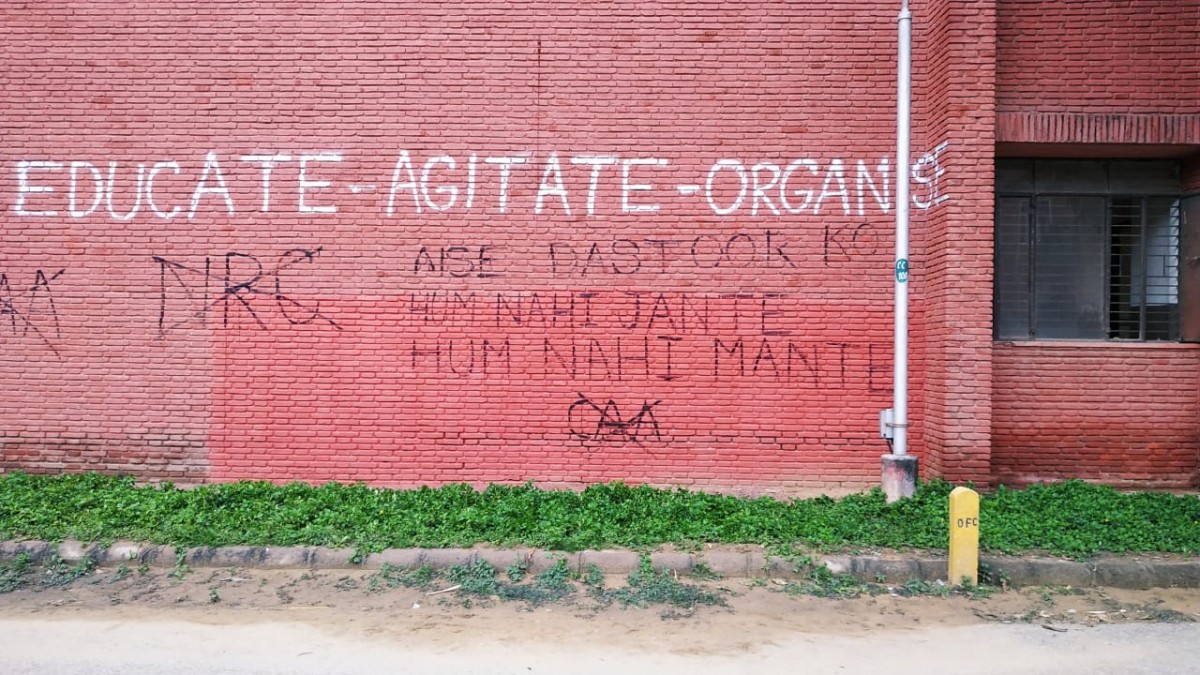 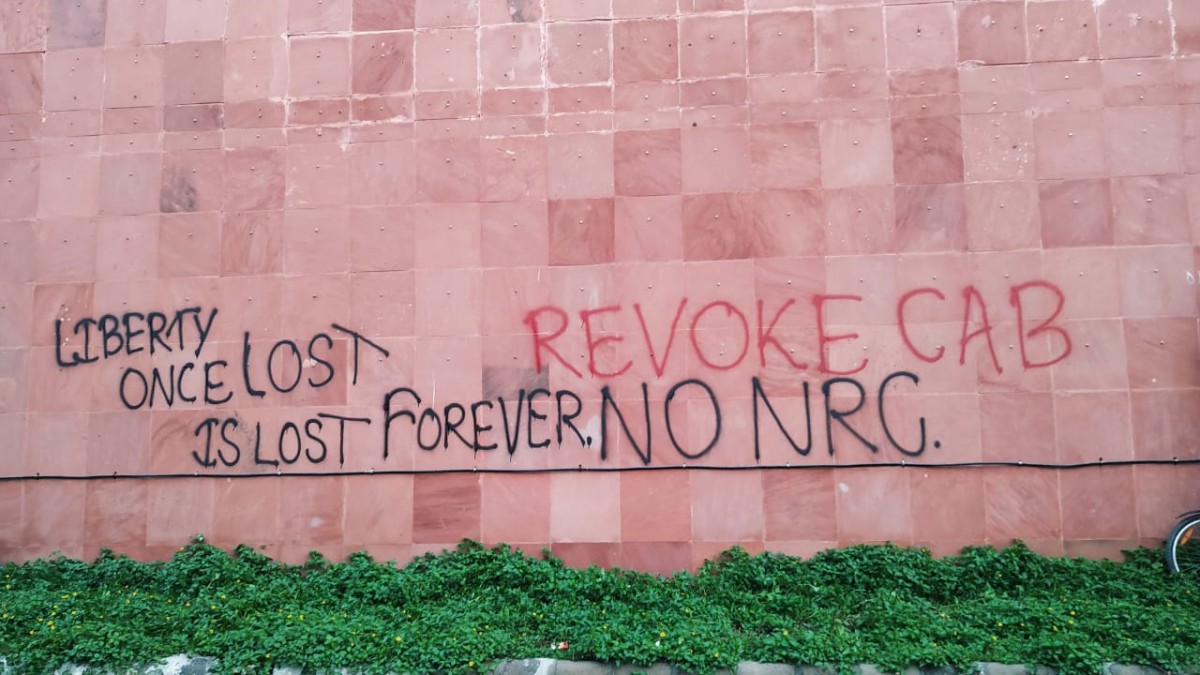 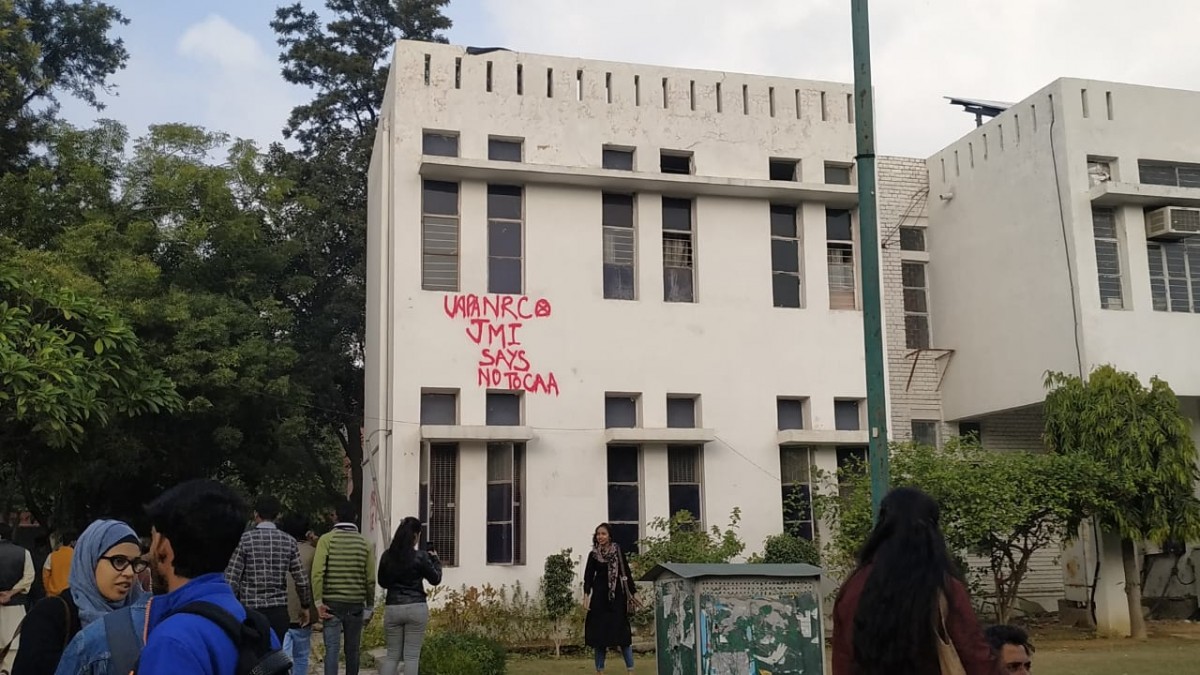 The beginning of the year was marked by an upheaval of students against the head of the fine arts department Hafeez Ahmed on charges of sexual and mental harassment, favouritism and unfair marking. What became a big movement started with a few women willing to stand up to authority.

On January 31, a small group of students started demanding Ahmed’s removal. In February, the protest gained momentum. As the protest grew, the administration promised to conduct an inquiry. Eventually, Ahmed was cleared by the Internal Complaints Committee’s investigation and was reinstated as the HoD. 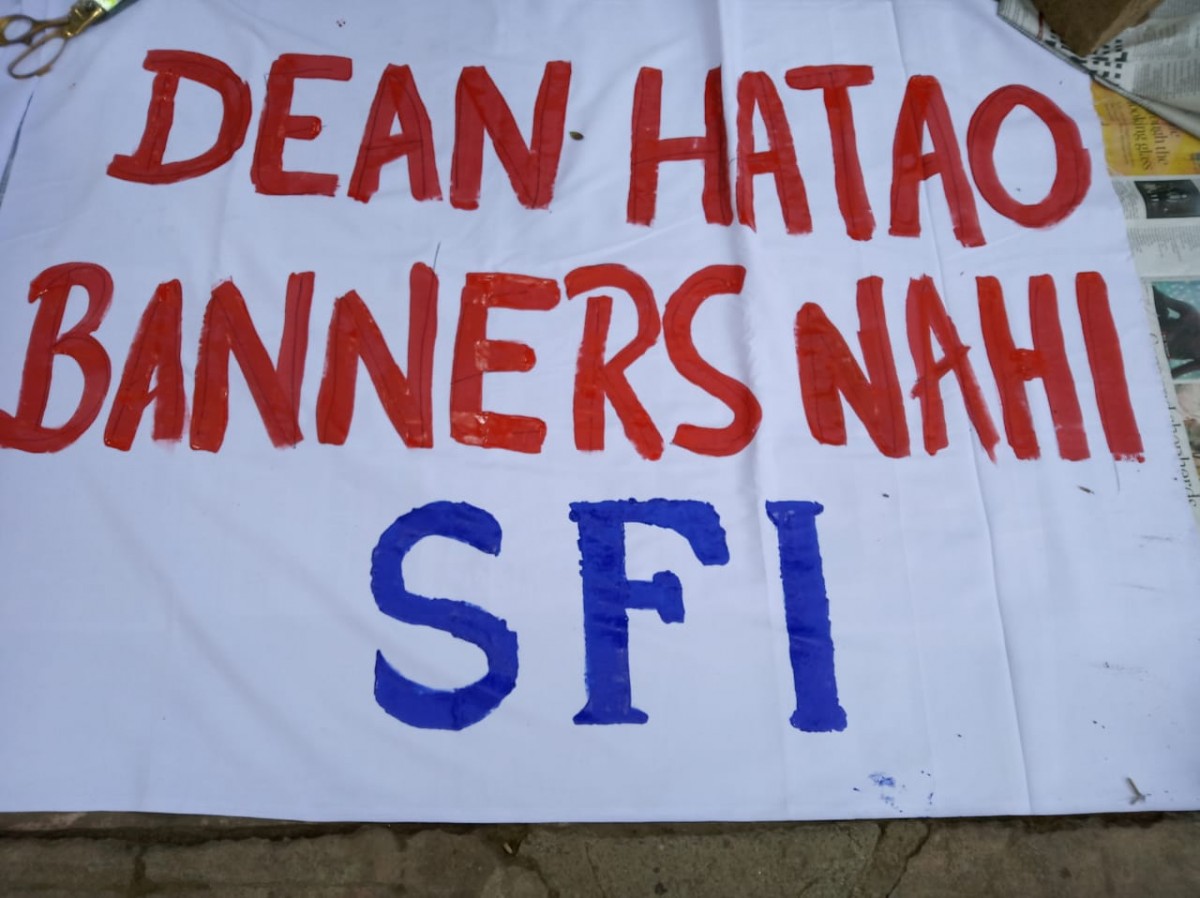 Kulsoom Fatima, a student of the fine arts department who was active during the protests, said, “Initially, our demand was for better faculty members because we hardly had classes in the department. Our applications were going in vain, so we decided to protest. Slowly, cases of sexual harassment started coming out. As the protest grew, our main focus became the issue of sexual harassment.”

She said when people started extending solidarity to the students’ cause, many more women came forward with their stories. “They decided to publicly speak, and release messages they had received from the HoD,” Fatima said. According to students, around 80 women have filed a petition against the HoD in court.

Fatima further said, “Even though Ahmed was removed as the HoD only for three months, it was a success for us, because it was a blow to the man.”

Ehtmam Ul Haque, a law student at the university, claimed that various authorities and top administration officials tried to shield the HoD and intimidated students also. “However, immense mobilisation and occupation of the admin block by students for one week made them bow down. They suspended the HoD until the independent inquiry’s report is submitted, after which the movement was called off,” Ul Haque said.

Talking about the “failure” of the ICC, he said, “It was a bogus inquiry, in which students were mentally harassed and Ahmed was given a clean chit.” 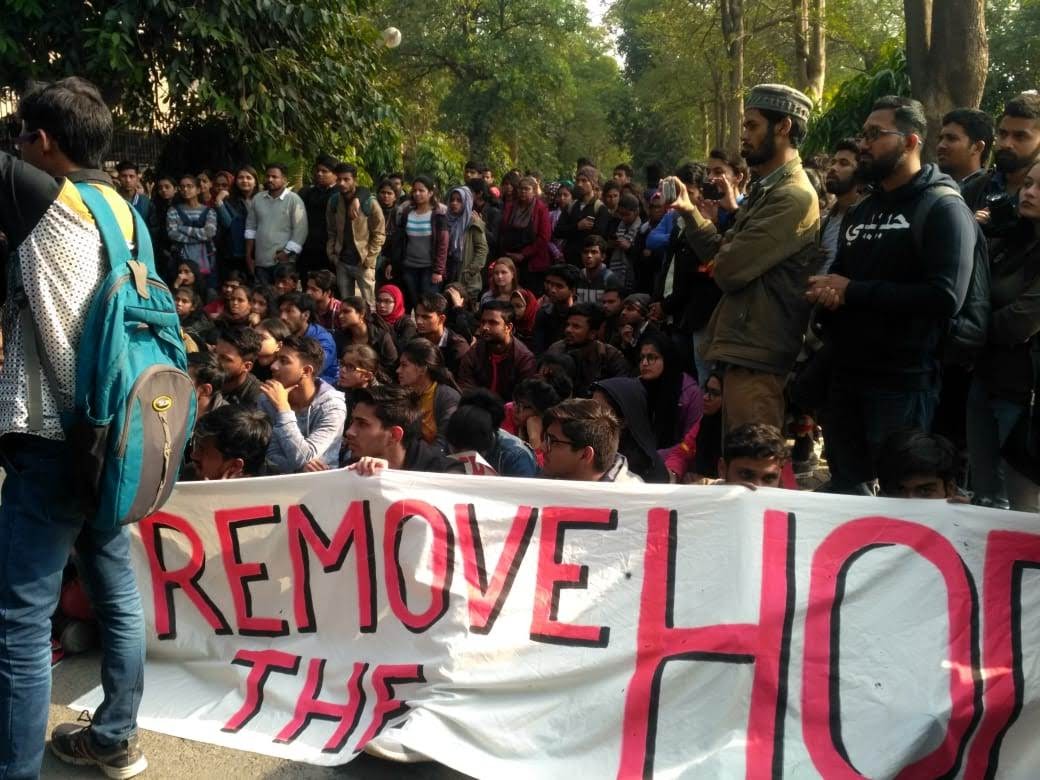 Ul Haque was active in all three protests that Jamia witnessed this year. He said, “This year, in Jamia, suddenly a political space was created. Since the BJP came to power, there has been a direct onslaught on minorities and marginalised people. As the need to fight this regime arose, Jamia answered the call and started to fight back.”

Jamia has not had a students’ union since 2006. Speaking about this, Ul Haque said, “Students’ unions of any university have an important role to play in protests. They legitimise the movement, allow mobilisation and offer leadership. But the students of Jamia, despite not having an elected student body, have managed to mobilise for protests.” 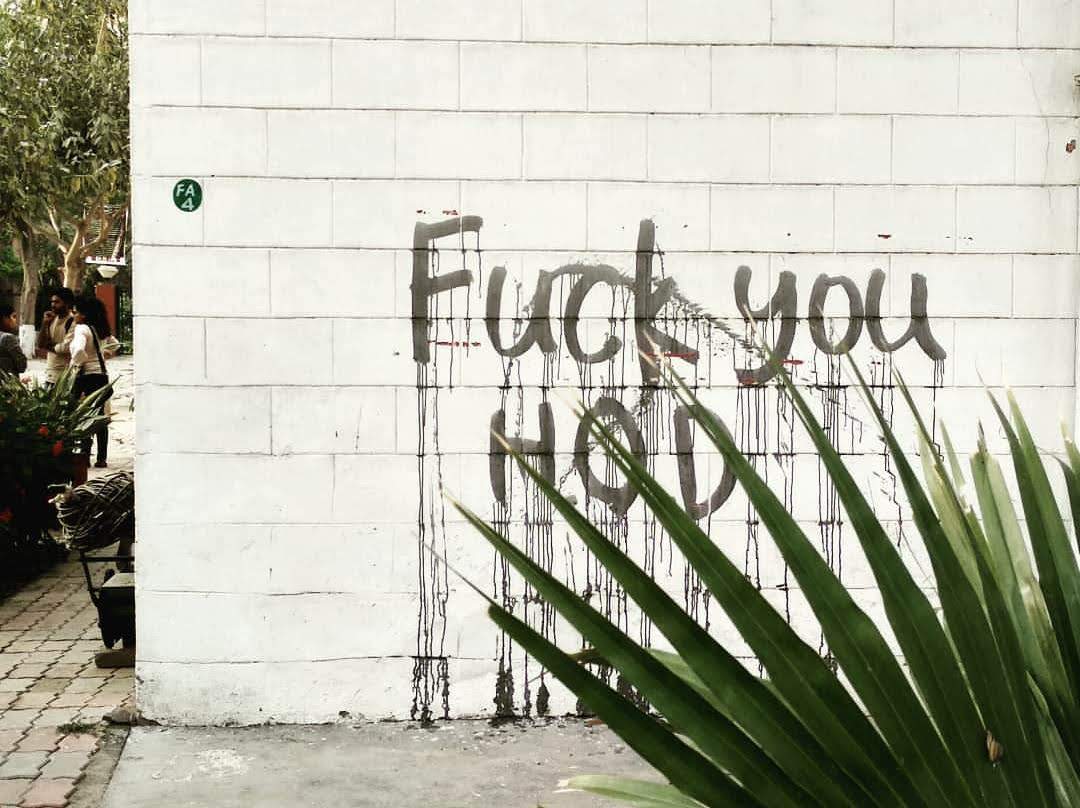 In the absence of an elected student body, students form temporary committees to lead the protests. For instance, during the anti-CAA protests, the Jamia Coordination Committee was formed. Some other organisations also work to mobilise students, such as the Dayar e Shauq Students Committee (DISSC), All India Students Association (AISA), Students’ Islamic Organisation of India (SIO), Muslim Students’ Front (MSF) and Jamia Students’ Front (JSF).

In October, the architecture department of Jamia had invited Israel to partner up for the Global Health Zenith Confluence programme, which some students protested because Israel has “occupied Palestine”. 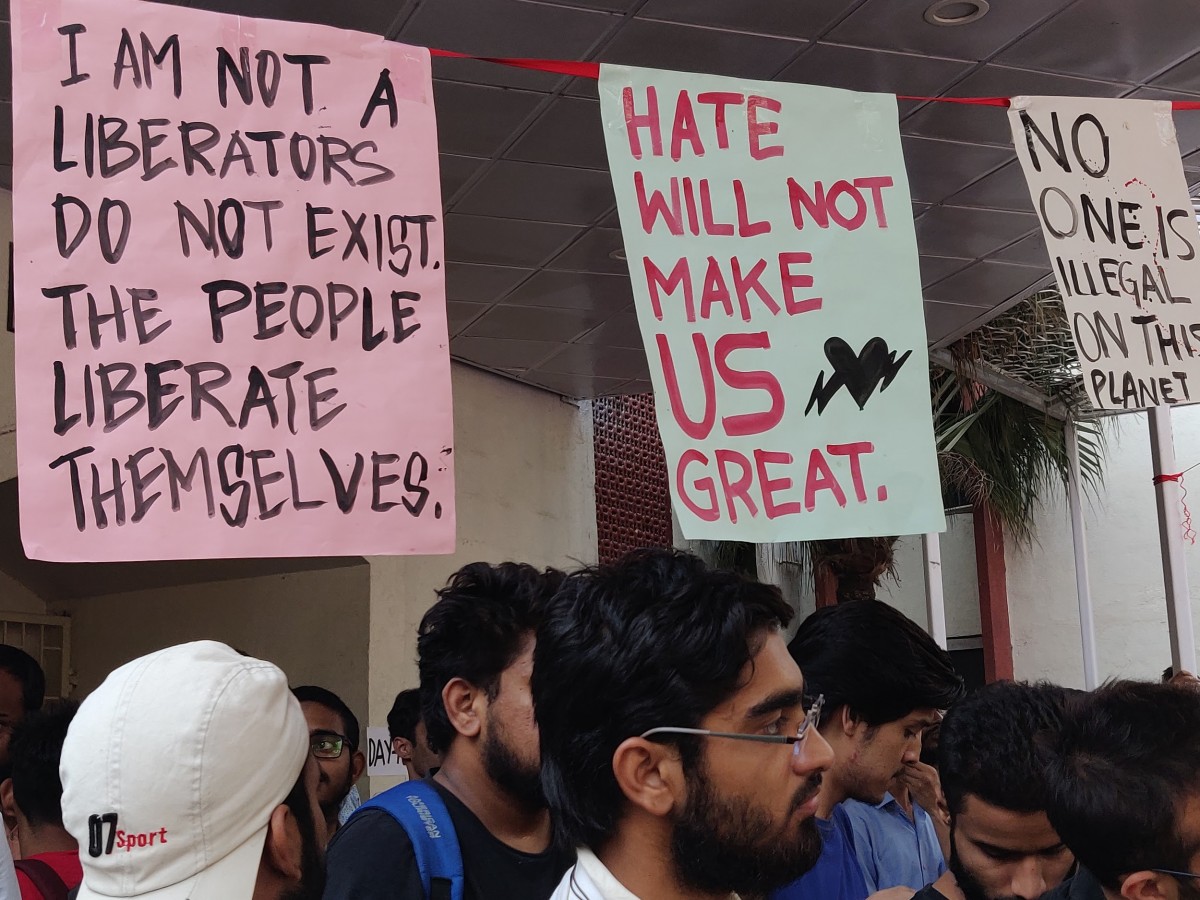 One of the protesters said, “Students protested against the participation of Israel because we didn’t want an occupational state to be a country partner in our university event. They wanted to talk about their health infrastructure to whitewash their criminal image in the international community. We stand with the Palestinian right to self-determination.” 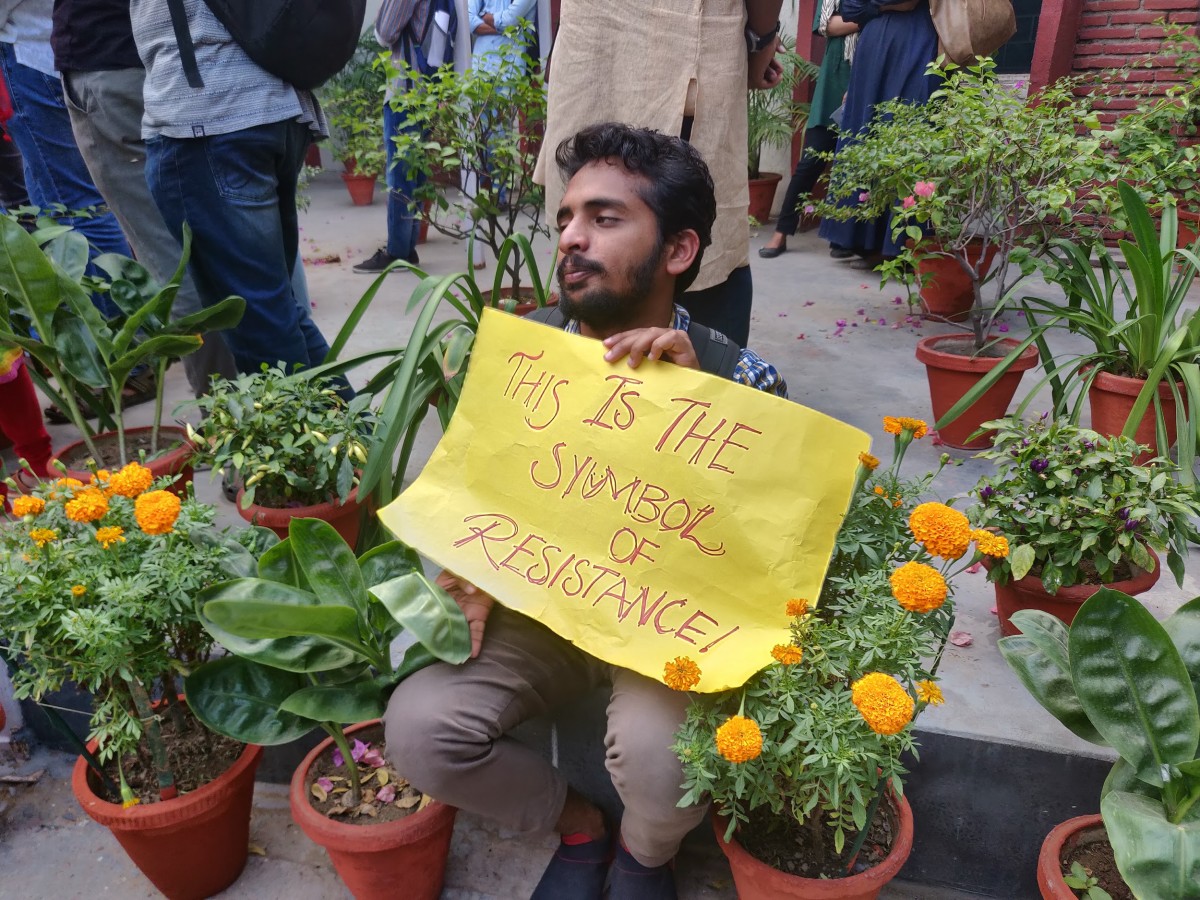 Ul Haque added, “Leaders who emerged from Jamia and even the administration has largely been in solidarity with Palestine and against Israel. We even have a hall by the name of Edward Said, the postcolonial thinker with roots in Palestine.”

A show-cause notice was served to five students among those protesting Israel’s involvement. 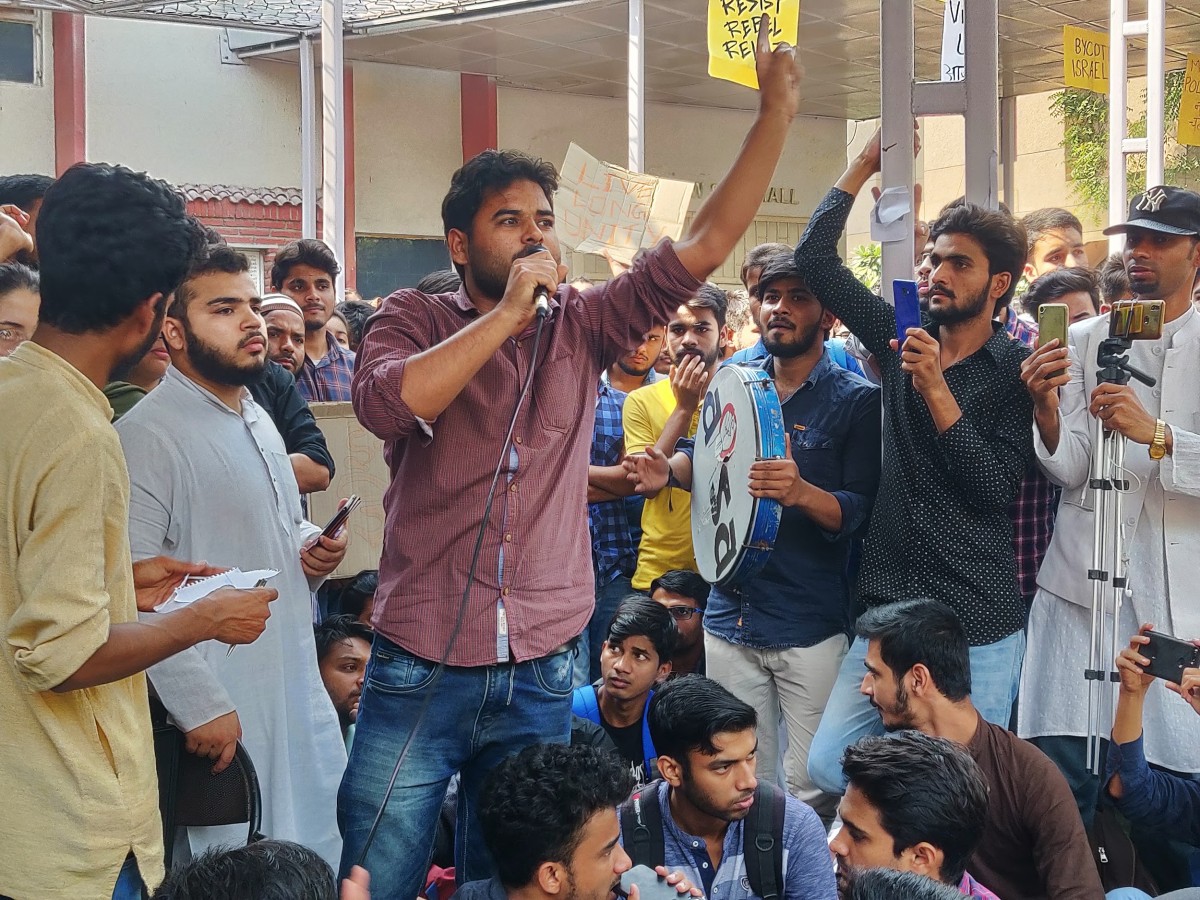 Ehtmam said that during the anti-Israel movement, the students vowed to take a politically conscious stand to support Palestine, “as was taken by our [India’s] founding fathers”. “Some were served with an arbitrary show-cause notice. This pushed all of Jamia’s students to protest against the administration. Many students boycotted their classes and protested, demanding that the notices be taken back.” 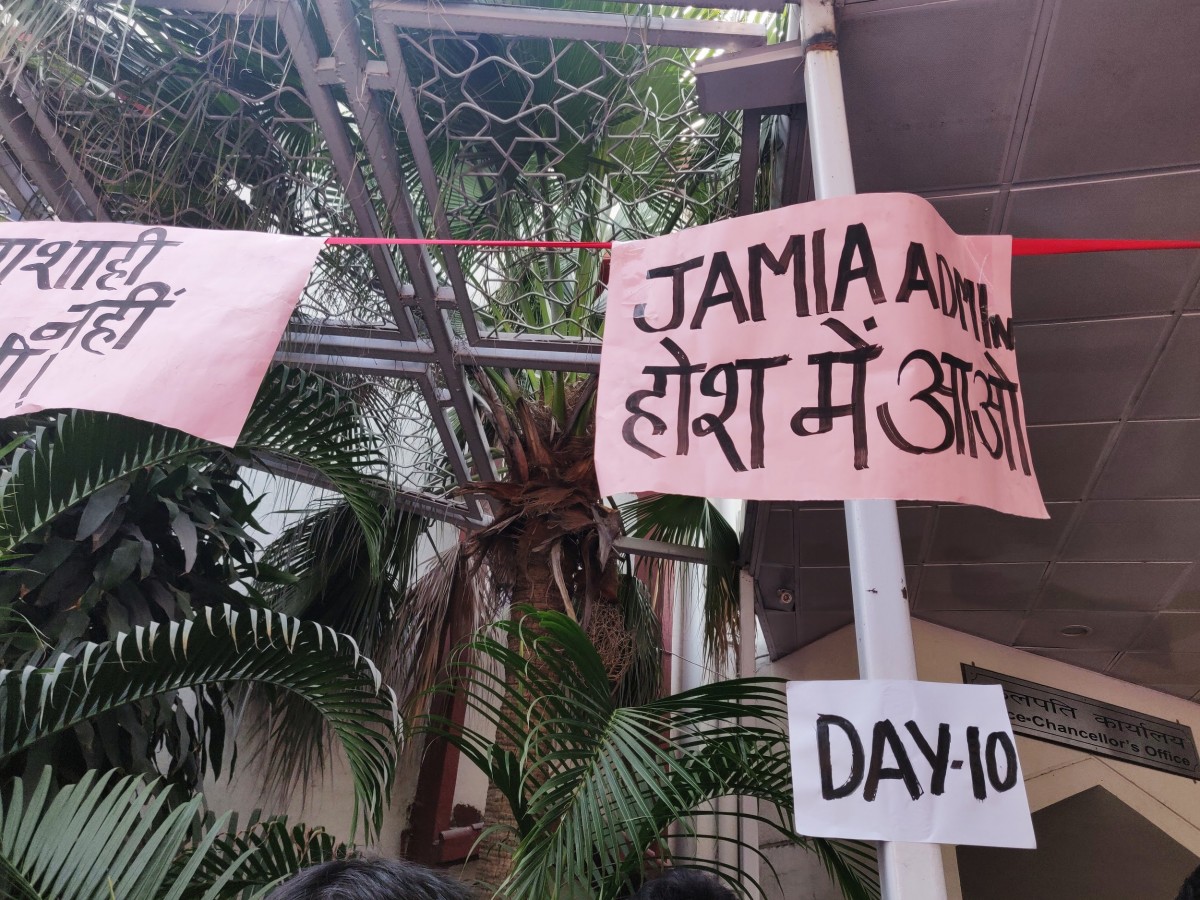 According to several students, the administration tried every measure to stop the protests, from deploying paramilitary forces to “attacking students” by letting local goons enter the campus. The students did not relent and occupied the admin block, forcing the administration to finally bow down and withdrawing the show-cause notice.

On December 13, a protest was planned against the CAA and the proposed nationwide National Register of Citizens (NRC) by students of Jamia. The police did not allow the students from participating in a peaceful march from Jamia to the parliament. The subsequent attack on the students, when police lathi-charged the students and tear gas shells resulted in massive numbers to protest against the police’s brutality. 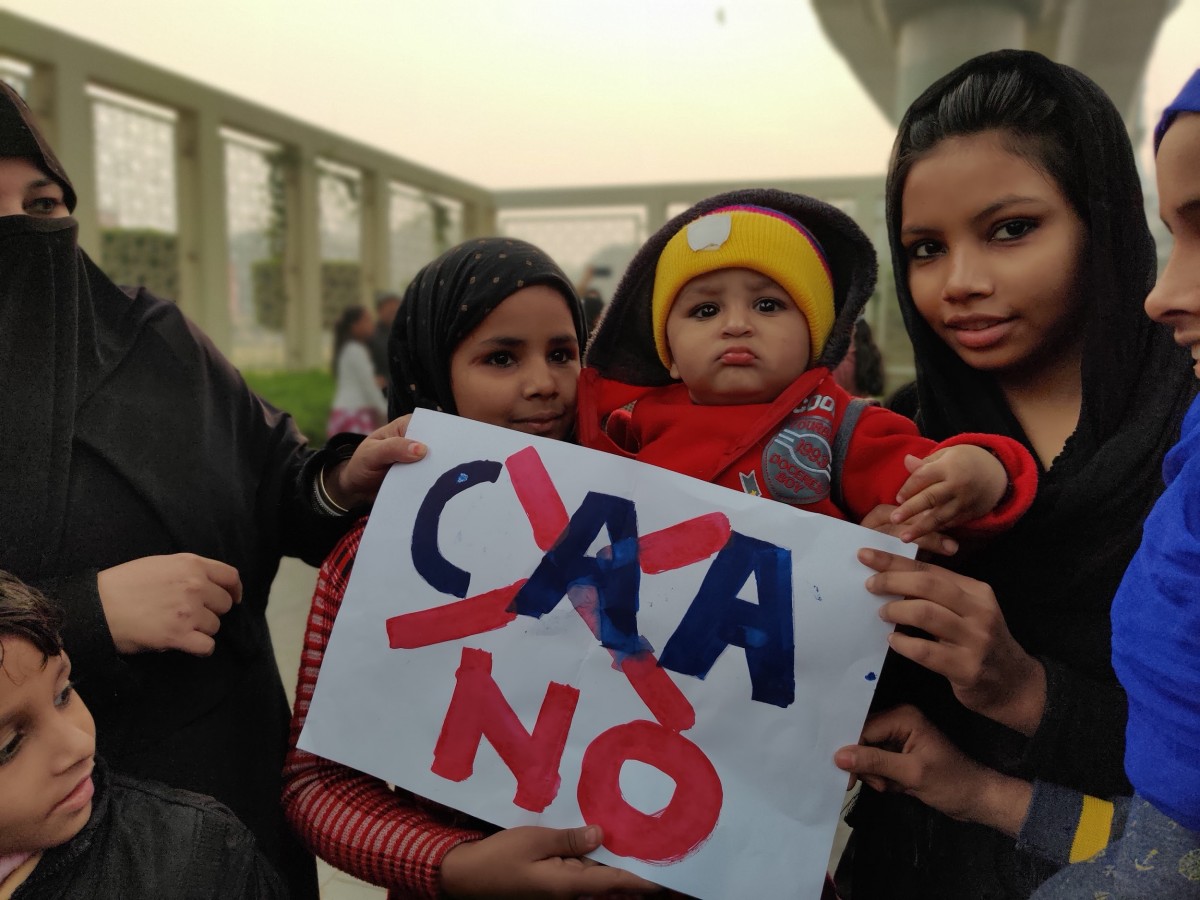 Students of several other universities expressed solidarity with Jamia, including those from AMU, JNU and Delhi University. This resulted in the anti-CAA protest becoming one of the largest the university has ever seen. The administration of Jamia Millia, in a bid to avoid protests, declared winter vacations from December 16 to disperse students, a day after the police action. As a result, the students have taken to the streets to protest. 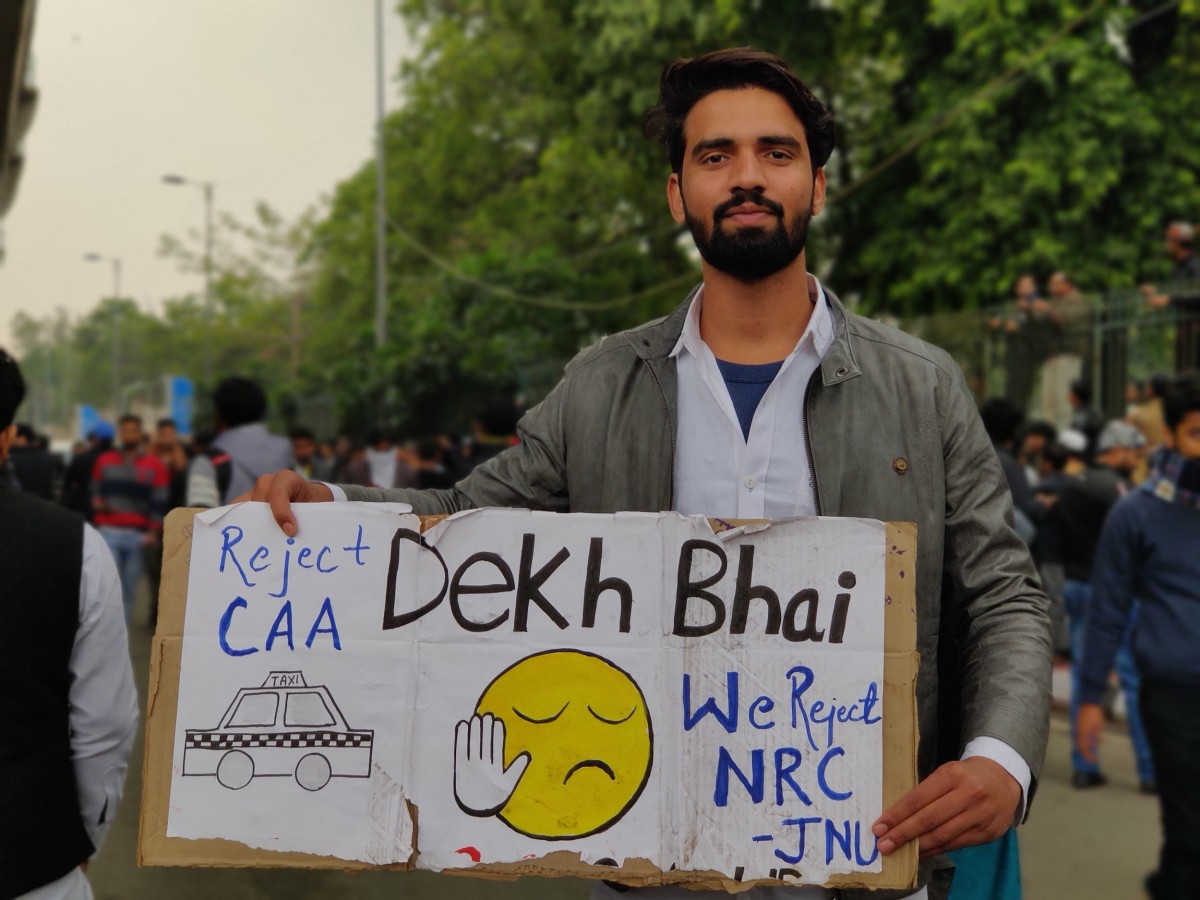 A student active in the protests, who wanted to remain anonymous, said, “In the current anti-CAA movement, the attack as blatant as it is, falls upon everyone including the teachers, students, staff and officials as well. Hence, they have been not tried to shut the movement down. But the vice chancellor, Najma Akhtar, was in a way seen justifying the police’s decision to enter the campus.” 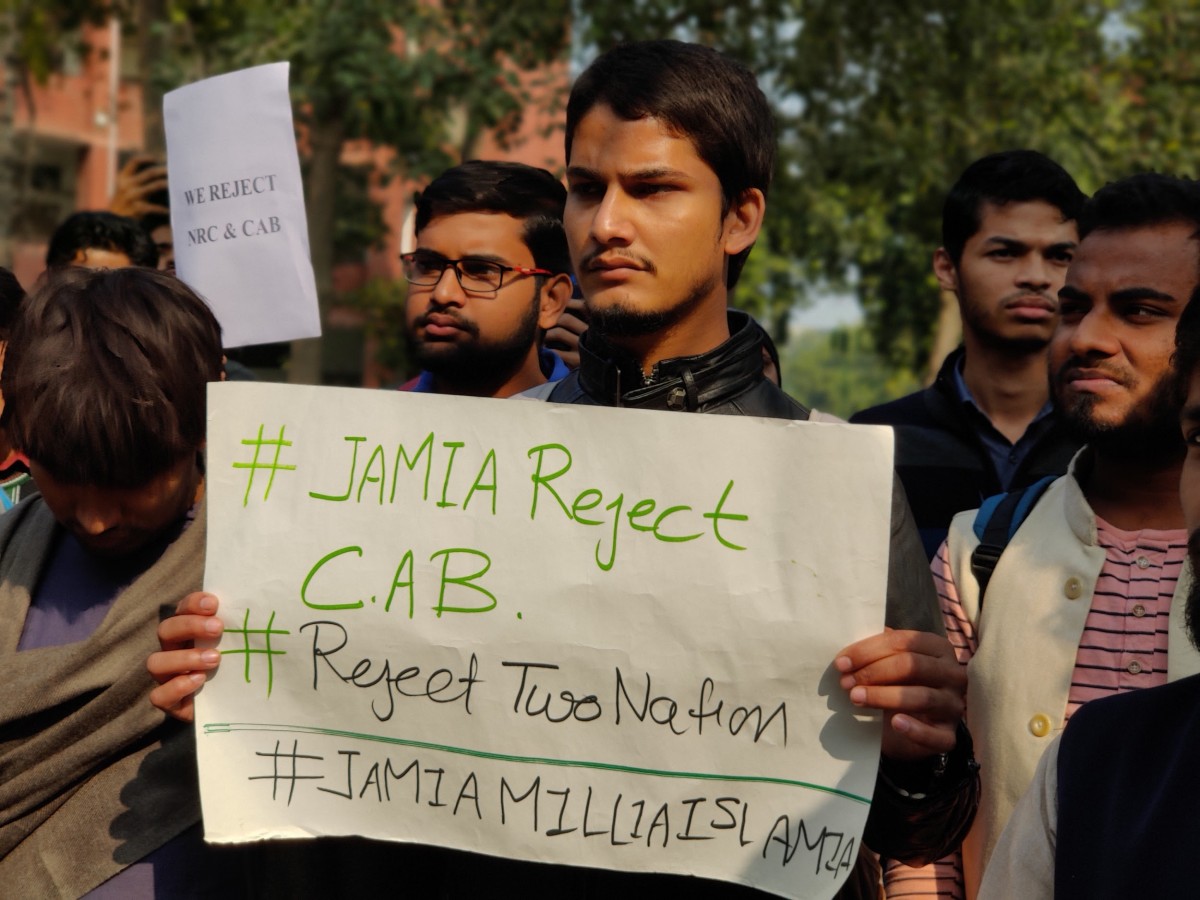 With the anti-NRC and anti-CAA protests, Jamia had managed to secure the attention of the entire nation. 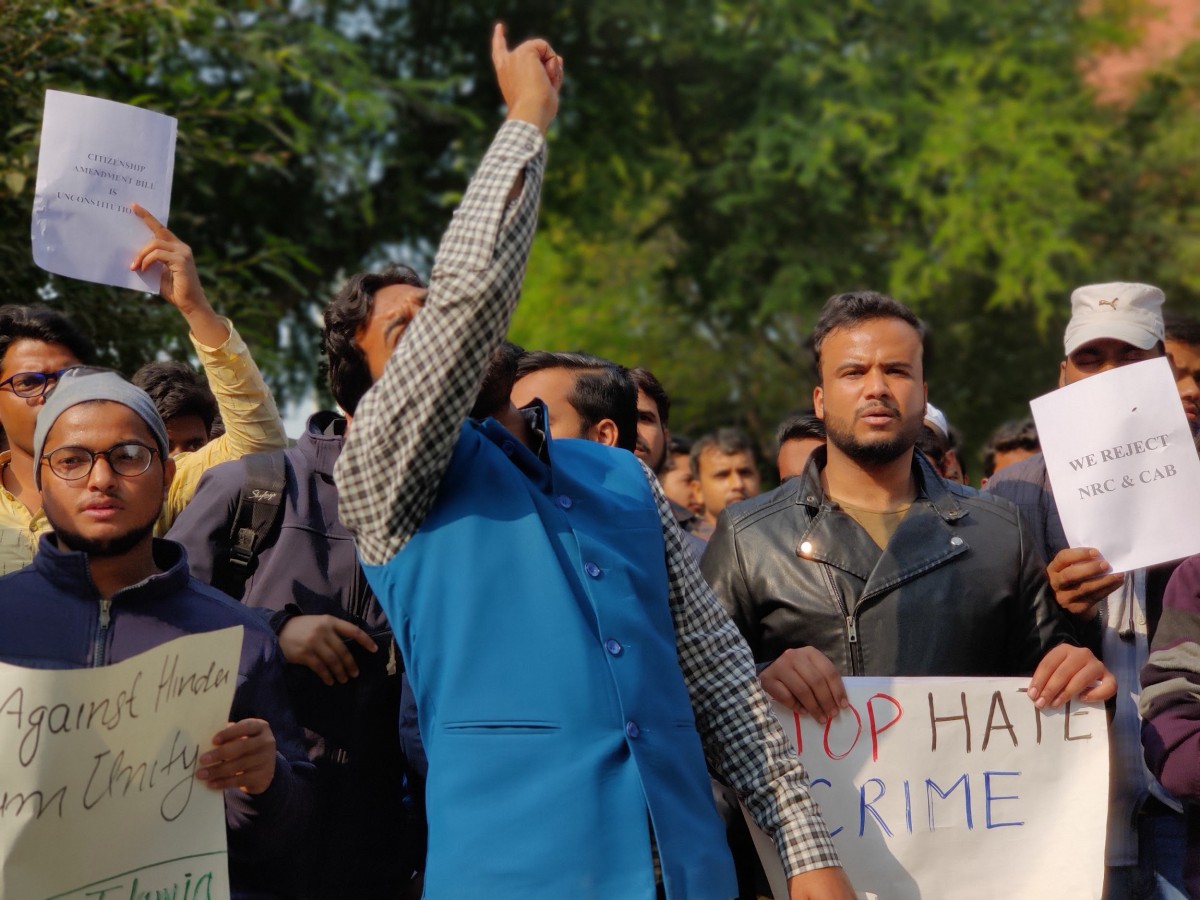 Another student of Jamia, Aqdas Sami, said that the university has become a symbol of resistance for the entire nation. “It is a huge achievement for the students of Jamia and we have shown everybody the way forward. Most students who are protesting belong to lower-middle-class families and have not backed out despite pressure from family members.” 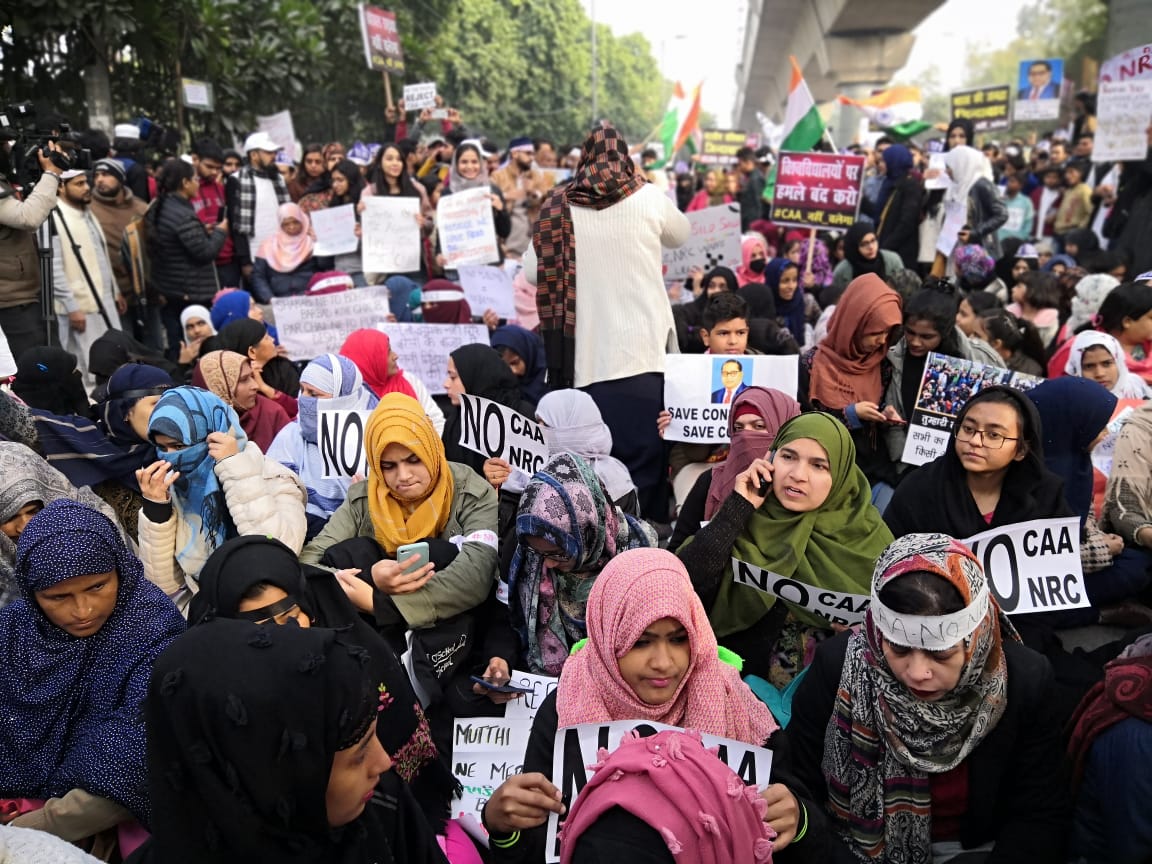 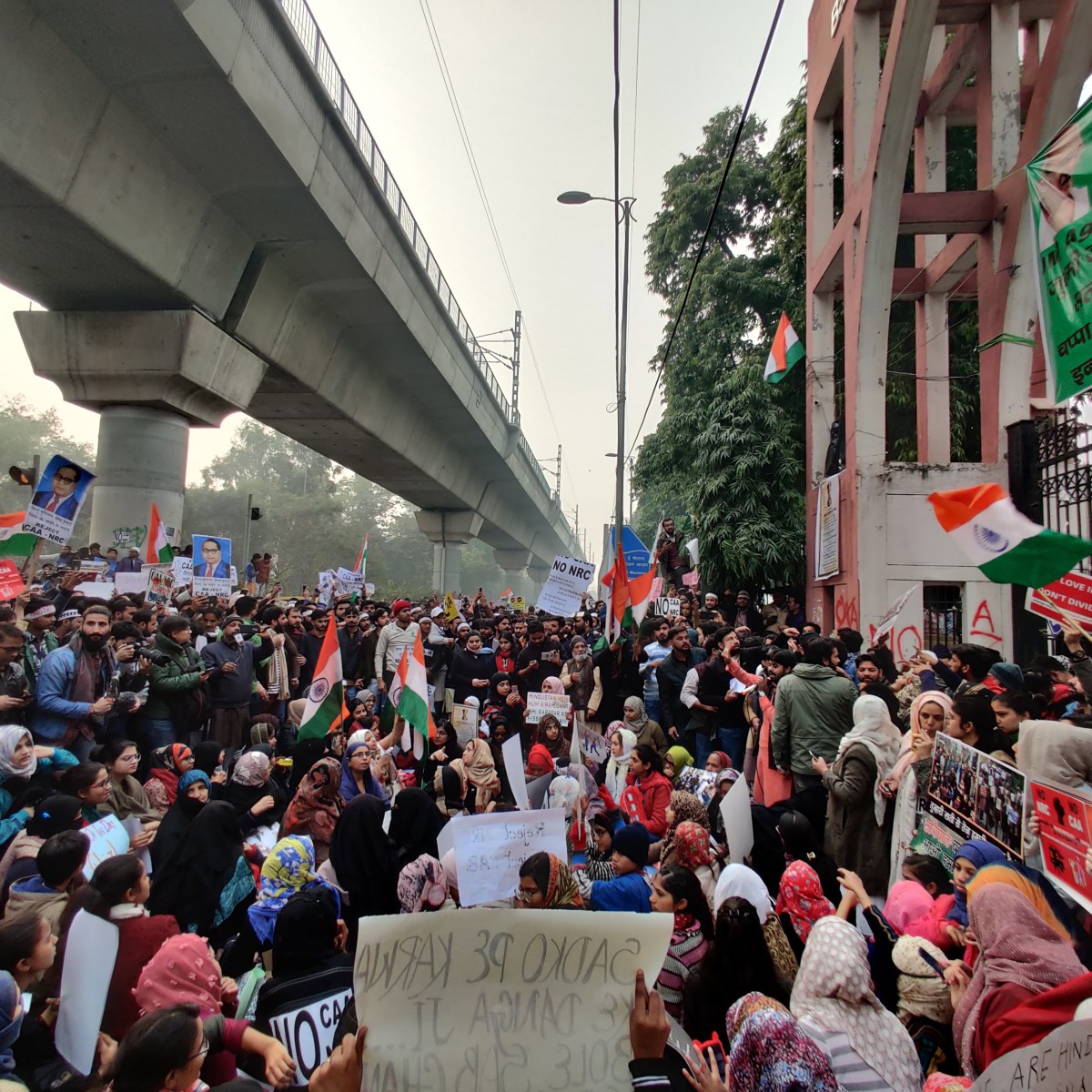 He added, “Student activism in Jamia has soared high over the past year with these three protests. Although in the ongoing protest, our current focus is on the NRC and CAA, our ultimate goal is to have a students’ union.”

All photos by Ismat Ara.