Students and eyewitnesses have been alleging since December 15 that the police assaulted them, but the police has been denying these claims. Police had even said that they did not enter the library at all. 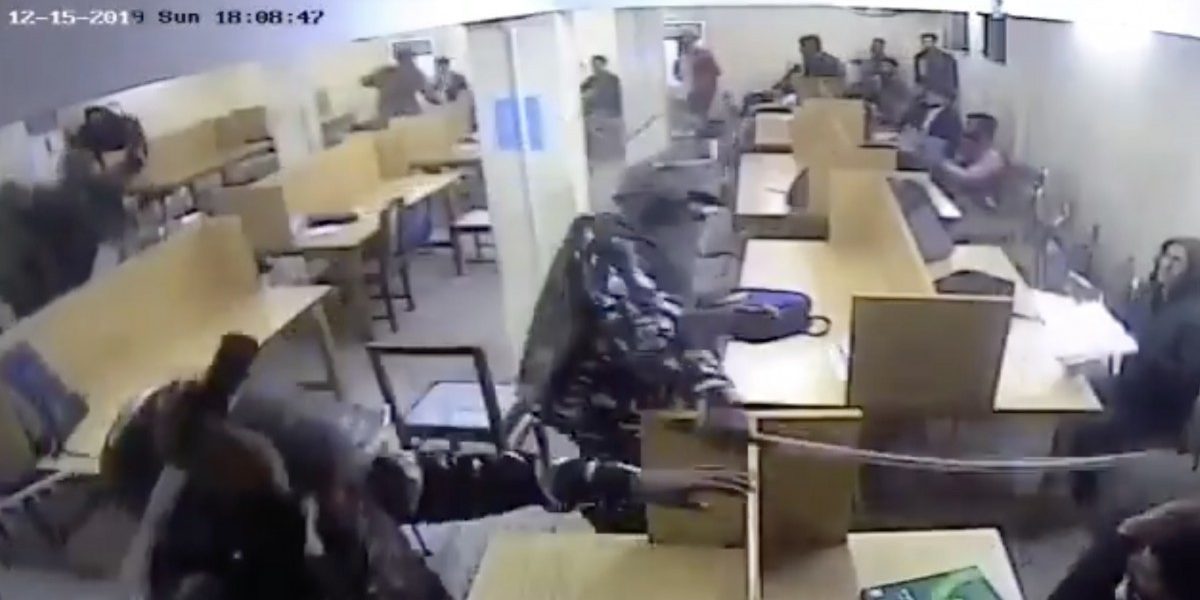 New Delhi: The Jamia Coordination Committee, a group of students who have been coordinating protests against the Citizenship (Amendment) Act on campus, has released a video which it says was captured by CCTV cameras in the university library on December 15, 2019. That is the day when the Delhi police reportedly used excessive force against students, including tear gassing the library, after some violence outside the campus.

Students and eyewitnesses have been alleging since December 15 that the police assaulted them, but the police has been denying these claims. The police had also said that they did not enter the library at all. One law student lost his eye in the violence. An internal Delhi police also found that three bullets were fired, though the police had initially claimed that it did not shoot at students.

In the video, the veracity of which The Wire has not yet been able to confirm, police can be seen violently using their batons on students inside the library. The students are either sitting at desks or trying to exit the library. Some police personnel and some students have their faces covered.

The video is timestamped 6:08 pm, and starts at the point when police start hitting students. Footage from what was happening in the library before that has not been made available. The clip goes on for 49 seconds.

Several people have been sharing this purported CCTV footage on social media, saying that it clearly proves that the police used violence and excessive force against students. A number of Congress leaders too have criticised the police action based on the video.

“See how Delhi Police is badly thrashing the students. A boy is reading a book but a cop continues to beat him. Home Minister (Amit Shah) and Delhi Police had lied that they had not entered the library, thrashed the students,” senior party leader Priyanka Gandhi Vadra wrote in Hindi. “After watching this video, if no action is taken against police action at Jamia… the intention of the government will be exposed.”

A fact-finding report by People’s Union for Democratic Rights had earlier asserted that Delhi Police had attacked Jamia students with an intent to inflict “maximum damage”. Students across the country had protested to show solidarity with Jamia Millia Islamia.

After the video was released on Sunday, the Delhi police said it was “verifying” it, as it appears to have been “edited”. Police also brought up two other videos purportedly from the same evening, Indian Express reported, which appeared to show protesters as being “prepared with stones”. The videos the police are referring to started doing the rounds later in the day on Sunday, and show students rushing into the library and blocking the door with tables.

A police official told Indian Express that they had received footage from the university a few days ago and were still verifying it. Special CP (Crime) Praveer Ranjan said, “We have taken cognisance of the videos that have emerged. We received footage from JMI a few days ago only after repeatedly requesting them to hand it over to us. We have to verify the footage, see if it’s been doctored, and also establish the chain of sequence.”

“It appears that the protesters were prepared with stones. Who sits in a library with a mask? They were not unarmed. The sequence, once established, will clarify everything,” he continued.

Safoora Zargar, a JCC member, told the newspaper that the videos did not prove students were ‘rioters’. “These are not ‘rioters’ entering the library, but scared students trying to escape police brutality and tear gas exposure. Anybody with a stone in their hand is not a rioter, and whether there are stones in the hand is also not clear.”