The Bharatiya Janata Party-run municipal corporation has organised a two-day anti-encroachment drive in the area. Shops on either side of the mosque were demolished. Photo: Sumedha Pal

New Delhi: Days after north Delhi’s Jahangirpuri was struck by communal violence, bulldozers arrived in the area at around 9 am on Wednesday (April 20) morning and began demolishing properties. The area saw heightened security, Indian Express reported, with 12 companies (around 1,250 jawans) of the CRPF deployed in and around the area.

However, the Supreme Court later in the morning ordered status quo on the demolition drive. Chief Justice of India N.V. Ramana said the matter should be listed for hearing tomorrow (Thursday), and until the court comes to a decision, status quo should be maintained.

The court was hearing a plea filed by senior advocate Dushyant Dave. “Something serious requires your immediate intervention. This is about a completely unconstitutional and illegal demolition which has been ordered in Jahangirpuri area, where riots took place last week. No notice has been served. There is a provision for appeal under the Municipal Corporation Act. We have filed a provisional application(before SC). It was supposed to start at 2 PM but they started the demolition today morning at 9 AM knowing that we will mention,” Dave had said before the bench.

However, the drive continued in Jahangirpuri despite the Supreme Court’s order.

Dave then went back to the court, saying that the demolitions were still continuing. CJI Ramana then asked the court registry to convey the order to the DCP and police immediately.

At around 12:45 pm, police told reporters at the spot that the demolitions were being stopped. The bulldozer was removed from the site soon after.

Tensions were high in the area during the demolitions, with Muslims alleging that the state was targeting them. Police locked up lanes of the area to keep people from gathering at demolition sites or trying to stop their properties from being torn down. 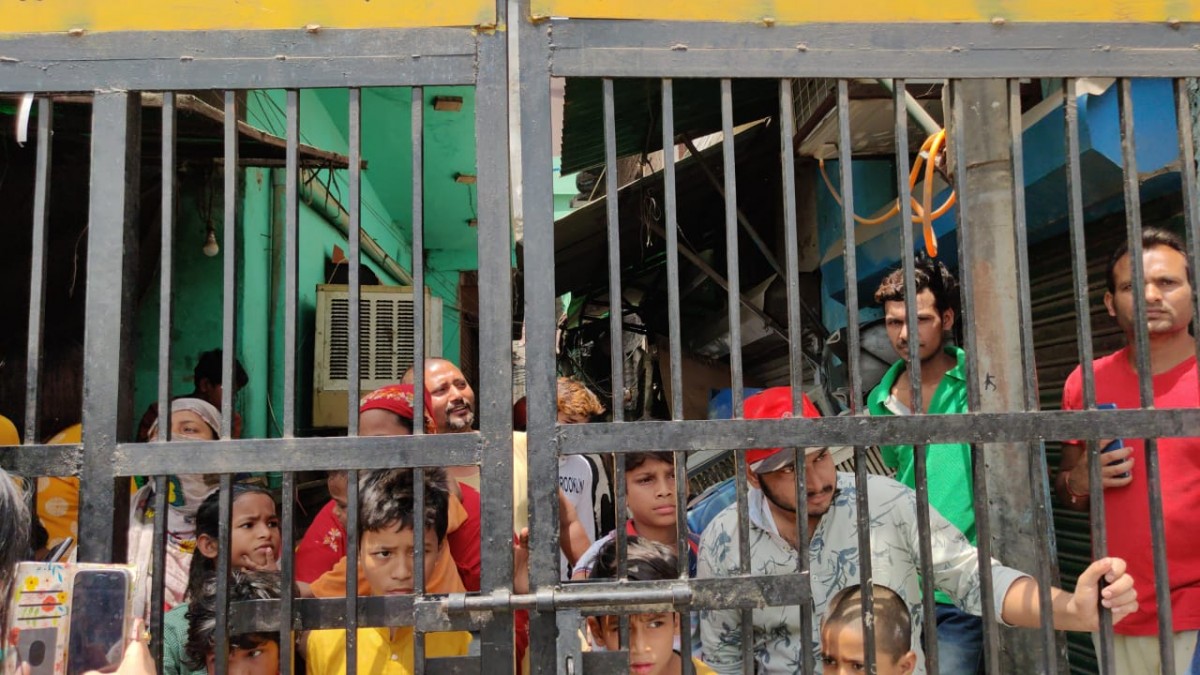 There were also rumours that the mosque in the area had been torn down. While that is not the case, some tiles and a railing on the mosque’s external wall were damaged, The Wire confirmed. Shops on both sides of the mosque were torn down.

CPI(M)’s Brinda Karat and Hannan Mollah reached the site before the demolition stopped and spoke to the police, attempting to have the Supreme Court order implemented. Karat reportedly also stood in front of the bulldozer.

The Bharatiya Janata Party-run municipal corporation has organised a two-day anti-encroachment drive in the area. The drive was undertaken a day after Delhi BJP chief Adesh Gupta wrote to the party-ruled North Delhi Municipal Corporation (NDMC) to identify “illegal constructions of rioters” in Jahangirpuri and demolish them using bulldozers.

“Our JCBs (excavators) and staff will go to Jahangirpuri to remove illegal encroachment from roads and government land. It is our routine exercise. We will execute it and return,” Mayor Raja Iqbal Singh had said. However, after the court order, he said, “We will follow the SC order and take action accordingly.”

We will follow the SC order & take action accordingly, says Raja Iqbal Singh the Mayor of North Delhi Municipal Corporation after the Supreme Court ordered a status-quo on the demolition drive being conducted by the civic body in violence-hit Jahangirpuri, Delhi pic.twitter.com/gU8XqgcVvE

However, he later claimed that the authorities hadn’t “received” the order yet.

Officials said security forces were carrying out a flag march in the area and they took stock of the situation before the drive was launched. A drone has also been deployed to monitor the situation.

For the last 15 years, my shop was here. No one raised the issue of illegality earlier, now after an incident of violence between two communities, this is happening, says a local in Jahangirpuri pic.twitter.com/ugmRgNJs0h

The NDMC had on Tuesday requested the Delhi Police to provide at least 400 security personnel to maintain law and order during the two-day drive.

“You (police) are therefore requested to provide at least 400 police personnel including lady police/outer force for maintaining law and order during the encroachment removal action on April 20 or April 21 (9.30 am onwards) as per your convenience for three days,” the assistant commissioner, NDMC civil lines zone, said in the letter to the DCP.

Residents of Jahangirpuri said they received no notice about this drive. Jamila, whose cart was among the first to be demolished by the bulldozer, told the Indian Express, “No notice was given to us. My husband and I have been running a cart here for two decades. Ye sab badle ke bhav se ho raha hai (This is being done with vengeance in mind).”

In a video message on Twitter, Okhla MLA Amanatullah Khan said demolition of the houses of a particular community just to harass them in the holy month of Ramadan on the pretext of an anti-encroachment drive will further spoil the atmosphere in the area.

He appealed to the home minister and the BJP leaders to refrain from resorting to such action, cautioning that the country’s atmosphere has already been vitiated.

On the evening of Saturday, April 16, communal violence broke out in the north Delhi neighbourhood after a Hindutva procession allegedly attempted to wave a saffron flag in front of a local mosque. According to police, there was stone-pelting and arson during the clashes and some vehicles were also torched.