Iran is witnessing its largest protest – this time led by women – in almost three years. The anger is over the Islamic republic's strictly enforced gender-based dress code. 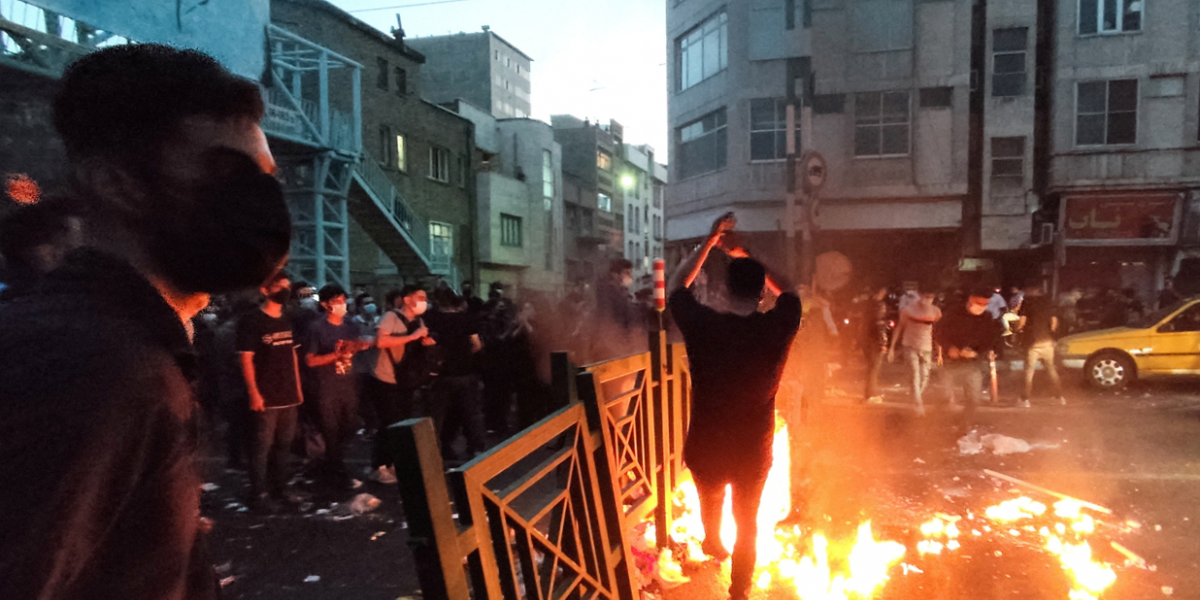 FILE PHOTO: People light a fire during a protest over the death of Mahsa Amini, a woman who died after being arrested by the Islamic republic's "morality police", in Tehran, Iran September 21, 2022. WANA (West Asia News Agency) via REUTERS

New Delhi: Amid severe internet restrictions and a highly regulated media, several videos of protests and violence against women have emerged on social media from Iran, as the country is witnessing its largest protest in three years over the death of a woman in police custody for “loosely wearing the hijab”.

According to The Guardian, at least 41 people have died so far, as per official records, since the unrest began, mostly protesters but including members of the security forces, but sources say the real figure is higher.

As per multiple reports on Sunday, September 25, Hadis Najafi, a 23-year-old Iranian woman, who earlier this week went viral in a video as she prepared to join the anti-government protests, was shot dead by security forces. The video showed her getting ready for the protest in Karaj  without hijab.

Her name was hadis najafi, a 20-year-old girl, bold and brave. she got killed by 6 bullets in the city of Karaj.
She was only 20. Say her name.#مهسا_امینی #IranProtests2022 pic.twitter.com/mD4mcwOf6n

Another Twitter user shared a post claiming three more women have been killed in the anti-government protests.

Masih Alinejad, an Iranian journalist and activist, shared a video on Twitter showing injured protesters bleeding, who appear to have been hit on the face and the head. In the video, some of them are being taken to the hospital, while some are lying on the road.

Separately, Al Arabiya reported scenes in Iran where the sister of a protester, Jawad Haidari, killed by the security forces in the anti-government protests, cut her hair in public on his grave.

There are reports of women burning their headscarves in protest against the Islamic republic’s strictly enforced gender-based dress code.

These women in #Iran’s northern city of Sari are dancing and burning their headscarves… anti-regime protests have now spread to dozens of cities from north to south, east to west… all triggered by the death of #MahsaAmini while in the custody of Iran’s morality police. pic.twitter.com/BBDvgC5L1w

BBC reported that authorities accused protesters of killing two civilians in Kermanshah as well as a police assistant in Shiraz.

Hundreds of demonstrators, reformist activists and journalists have been arrested amid the mostly night-time demonstrations that have spread to scores of cities since unrest first broke out after Amini’s death on September 16, AFP reported.

The protests broke out after 22-year-old Mahsa Amini died in police custody, after she was arrested by the ‘morality police’ for wearing the hijab loosely (some hair was visible under her headscarf) – allegedly violating the country’s law on headscarves.

She died on September 16 after spending three days in a coma.

According to reports, Amini had collapsed while in custody and was taken to hospital, where she later died. According to reports, witnesses saw the police beating Amini in the head with a baton and banging it against one of their vehicles. However, they denied the reports, attributing her death to “sudden heart failure”.

However, her father told an Iranian news outlet that Amini was “fit and had no health problems,” BBC News reported.

On Iran’s law on wearing headscarves, Yeganeh Mafaher, a 24-year-old activist born in Iran who lives in the US now, told TIME that although conservative dress and hijab laws were very strictly enforced after the revolution in 1979, these days, some Iranians don’t take it so seriously. “Throughout the years, you can even see it in photos of Iran. Women started making the hijab looser and looser,” she said.

A morality police officer, who spoke anonymously, told the BBC News about his experience working in the force. He said, “They told us the reason we are working for the morality police units is to protect women. Because if they do not dress properly, then men could get provoked and harm them.”

Meanwhile, the United Nations released a statement about the recent rise of the Iranian morality police attacking women over loose hijabs, and has called for an independent investigation into Amini’s death.

“We strongly condemn the use of physical violence against women and the denial of fundamental human dignity when enforcing compulsory hijab policies ordained by State authorities,” a panel of United Nations human rights experts said on September 22. “We call on the Iranian authorities to hold an independent, impartial, and prompt investigation into Ms Amini’s death, make the findings of the investigation public and hold all perpetrators accountable.”