Iran Is Seeing the Political Awakening of a Generation

The widespread waves of protests that have swept Iran in the past few weeks suggest the meltdown of the theocratic ideology in Iran. 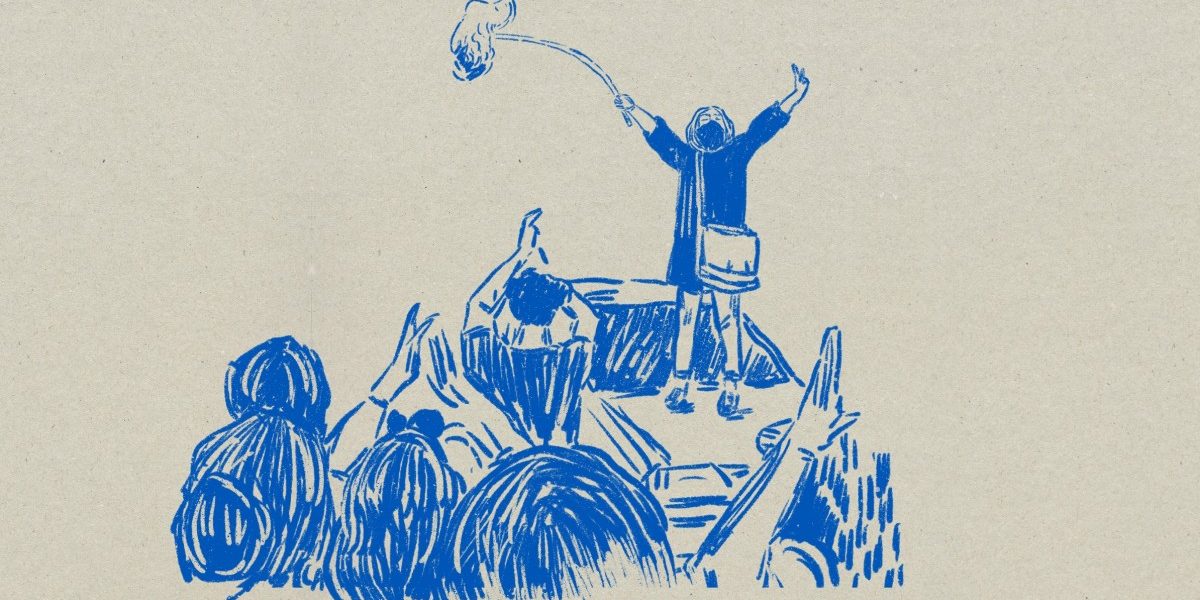 Thirteen years ago, the world watched in admiration the peaceful, non-violent protests of young Iranians in the aftermath of Iran’s fraudulent presidential elections of June 2009 that re-elected Mahmoud Ahmadinejad as president.

Today, a new generation is challenging the ideological structures of the Iranian theocratic regime. In the past several weeks, people around the world have witnessed the courage and the resolution of young Iranians who have transformed their fear of the Iranian dictatorship into a social anger.  This anger has revitalised the Iranian civil society and motivated politically all Iranians around the world.

Unsurprisingly, this time the Iranian people are not fighting to rescue their votes in a presidential election or to protest against unemployment, inflation and economic hardship, but they are supporting the young Iranian women to win their basic rights against the mandatory wearing of hijab. A newspaper with a cover picture of Mahsa Amini, a woman who died after being arrested by the Islamic republic’s “morality police” is seen in Tehran, Iran September 18, 2022. Majid Asgaripour/WANA (West Asia News Agency) via REUTERS

This is a point of no return for the Islamic regime in Iran for two reasons.

First, even if the Iranian authorities succeed in repressing the protests which are taking place in more than 100 cities of Iran, they will be incapable to re-organise the regime politically and solve its legitimacy crisis. The truth is that the political evil is inherent in the nature of the Iranian regime. This does not mean that democracy is around the corner in Iran, but it does mean that young Iranians are bringing a change to the future of their country, which once looked a dream to their parents and grandparents.

The second reason is that that the civic movement in Iran is happening now at the national level, and the public removal of the hijab has since become a universal sign of rejection of the regime, uniting Iranian women and men of all faiths and ethnic identities across the country.

The truth is that the Islamic regime of Iran has been sitting on a powder keg for nearly three decades and the death of Mahsa Jina Amini was the spark that created a giant explosion. The backlash to Mahsa’s death was stronger than what anybody could think of, though this was not the first time that an Iranian woman was killed in custody.

But with Mahsa’s death an age ended and the soul of the Iranian nation, long time suppressed, found an expression.

This time, not only the Iranian women, but every Iranian inside and outside Iran is struggling against 43 years of human rights abuses. 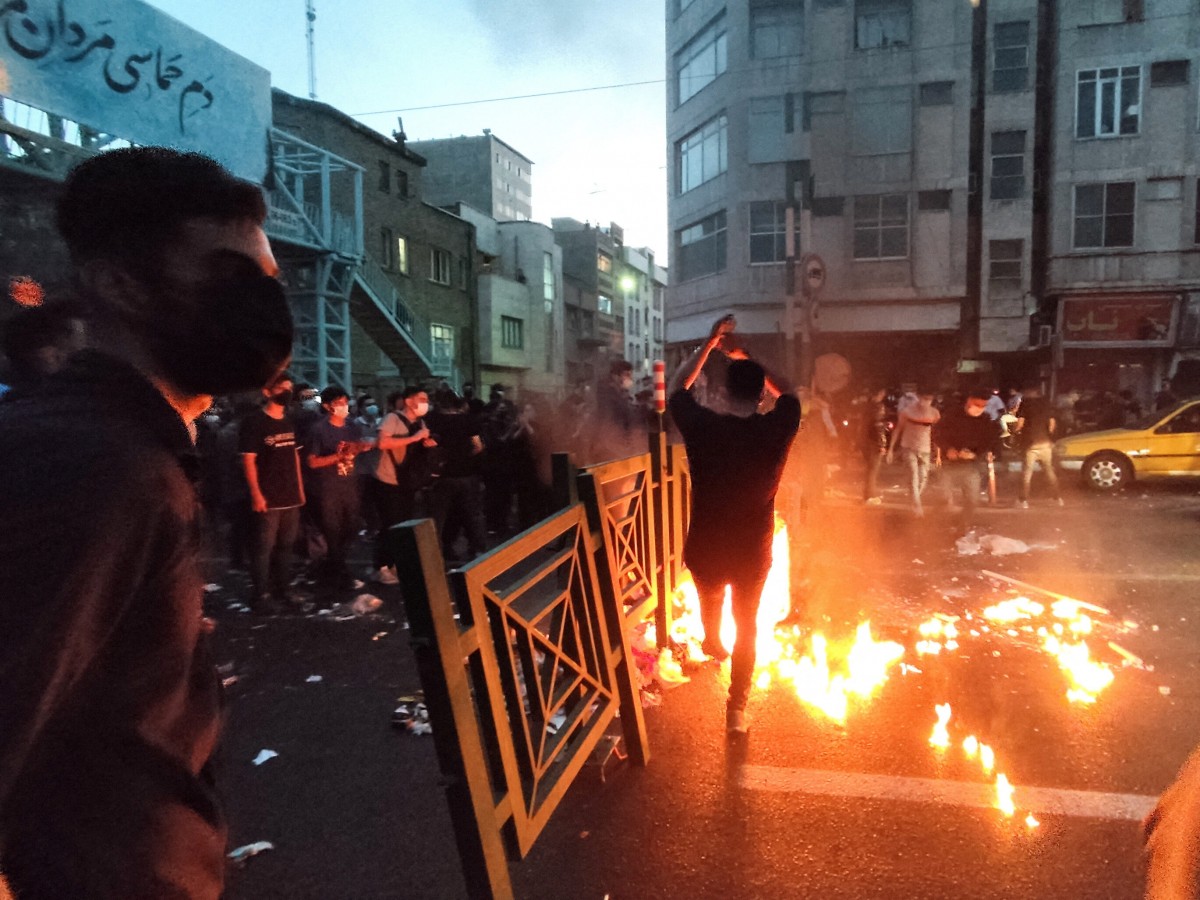 People light a fire during a protest over the death of Mahsa Amini, a woman who died after being arrested by the Islamic republic’s “morality police”, in Tehran, Iran September 21, 2022. Photo: WANA (West Asia News Agency) via Reuters

This is why the recent protests in Iran cannot be portrayed easily as the continuation of the demonstrations that emerged in Iran in 2019. However, the huge difference between today’s struggle of young Iranians against the Islamic regime and the previous civic movements is that it has neither an apparent leadership, nor a well-defined ideology. In that sense, we are not talking about a revolution, in the classic sense of the term, but of a general rebellion.

On a broader level, we need to note the significance of the youth movement in Iran and underline the fact that the growing generational gap between the Islamic state and the Iranian youth, particularly young women, has never been wider.

Also read: An Artist’s Tribute to the Iranian Women’s Revolution

As a matter of fact, the explosive growth of the young population combined with urbanisation, an increasing unemployment rate and the rapid expansion of university education has produced new sociological actors in Iran, mostly women, in fact, who are essentially educated but with no political, economic, or social future.

For the past three decades, the Islamic regime has continuously tried to cope with the challenge of governing the Iranian youth, but it would be an understatement to say that political fragmentation within Iran has never been more evident, and the clerical elite have never been challenged more clearly at the domestic level. 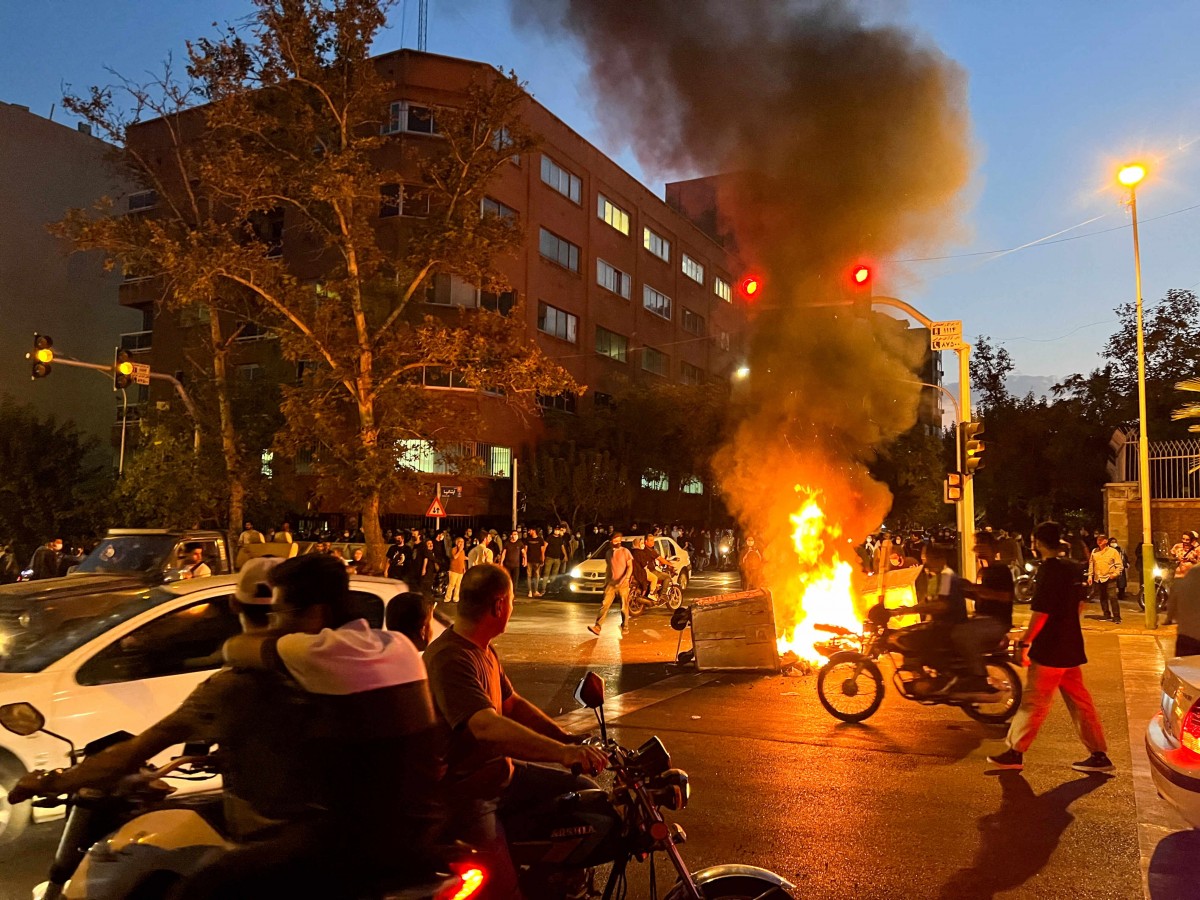 A police motorcycle burns during a protest over the death of Mahsa Amini, a woman who died after being arrested by the Islamic republic’s “morality police”, in Tehran, Iran September 19, 2022. Photo: WANA (West Asia News Agency) via Reuters

Truly speaking, the widespread waves of protests that have swept Iran in the past few weeks suggest the meltdown of the theocratic ideology in Iran.

Also, these protests have seriously put into question the moral status of the theological sovereignty in Iran and its legitimacy among its last supporters inside and outside the country. This is due to the fact that the protest movement in Iran is more civilised than the Iranian government when it comes to methods of creating social change in Iran, while seeking an ethical dimension to Iranian politics.

This implies that Iranian youngsters are ready to make a distinction between two approaches: searching for truth and solidarity versus lying and using violence. Even if, today, the young generation of Iranians are incapable of changing the Islamic establishment of Iran, the near future of this country will no more be theological. If this happens, it will likely affect Muslim societies far and wide.