Despite SC verdict on internet ban, the government has decided not to lift curbs imposed on the Valley on August 4, 2019; low-speed mobile internet to be restored in 5 Jammu districts, users can only access ‘white listed’ sites.

Graphic adapted from a Reuters photo.

Srinagar: Five days after the Supreme Court asked the government to review the internet blockade imposed on the people of Jammu and Kashmir since last August, the J&K administration has decided not to fully restore the service, stating that the ban on ordinary people using the internet to communicate was required in order to prevent “anti-national elements who are attempting to aid and incite people by transmission of fake news and targeted messages … propagate terrorism, indulge in rumour-mongering, support fallacious proxy wars, spread propaganda/ideologies, and cause disaffection and discontent.”

An order passed late Tuesday by the J&K government’s home department cites “security of the state” and “maintaining public order” as the reasons to not lift the longest internet shutdown in history, which it said was “absolutely necessary … in the interest of the sovereignty and integrity of India”.

With 160 days already over and counting, January is the sixth straight month of the curbs that were imposed on the night of August 4-5, 2019, when Jammu and Kashmir was stripped of its special status, divided and downgraded into two Centrally controlled Union territories – Jammu and Kashmir, and Ladakh.

According to the order, the government has decided to resume low-speed 2G internet service on postpaid mobile phones only in the districts of Jammu, Samba, Kathua, Udhampur and Reasi from Thursday, January 15. The remaining districts – Poonch, Rajouri, Ramban, Kishtwar and Doda – will remain without mobile internet.

However, users there too, as per the order, will only be able to access “white-listed” sites such as e-banking services and government websites.

In Kashmir, however, the ban on both mobile internet and broadband services for ordinary citizens, would continue, though the administration said it would open 400 more internet kiosks where the public could go in case of urgent need.

On Friday, the Supreme Court, while hearing the petition by Kashmir Times editor Anuradha Bhasin, had declared that the ongoing, open-ended internet curbs in J&K were not permissible, and freedom of speech and expression through the internet was a fundamental right under Article 19(1)(a) of the Indian Constitution that could be subjected only to the same “reasonable restrictions” as speech through any other medium.

The court asked the J&K government to review its restrictions within a week and publish any orders on the basis of which it was imposing curbs but stopped short of directing it to lift the ban.

Tuesday’s administrative order also asks service providers (ISPs) to give broadband internet service to those institutions dealing with essential services, while stating that the government would open 400 more internet kiosks in Kashmir.

The order reads: “Prior to giving such facility, the ISPs shall install necessary firewalls and carry out ‘white listing’ of sites that would enable access to government websites and websites dealing with essential services, e-banking etc. excluding, however all the social media sites. To amplify, there shall be complete restriction on social media applications allowing peer to peer communication and virtual private network applications for the time being.”

In line with earlier orders imposing stringent conditions while restoring internet access to government departments, those institutions and government offices, where broadband services will resume, have been made responsible for any “misuse”.

“…they shall take all the necessary precautions, including appointment of nodal officers, keeping a record of persons/devices, managing and monitoring day to day usage, changing accessibility credentials on a daily basis…”

The government, in the order, reiterates that “the misuse of data services by anti-national elements has the potential to cause large scale violence and disturb public order which has till now been maintained due to various pre-emptive measures…”

Citing inputs and ground assessment by the police and intelligence agencies, the government claims that sustained efforts were being made by militants to infiltrate the border, reactivate their cadres, and scale-up “anti-national” activities in Kashmir as well as militancy-affected areas of Jammu.

The militants, as per the government, do so by communicating through Voice on Internet Protocol (VOIP) and encrypted mobile communication through various social media applications.

Mentioning the Supreme Court’s verdict last week, the order says the fresh directions were issued after “taking into account the ground situation and considering the available alternative measures, in light of the reports of the authorised officers, subject to a detailed review that is being undertaken…”

“The aforesaid directions shall be effective from 15.01.2020 and remain in force for a period of 07 days, unless modified earlier…,” the order reads.

The full text of the official order is posted below. 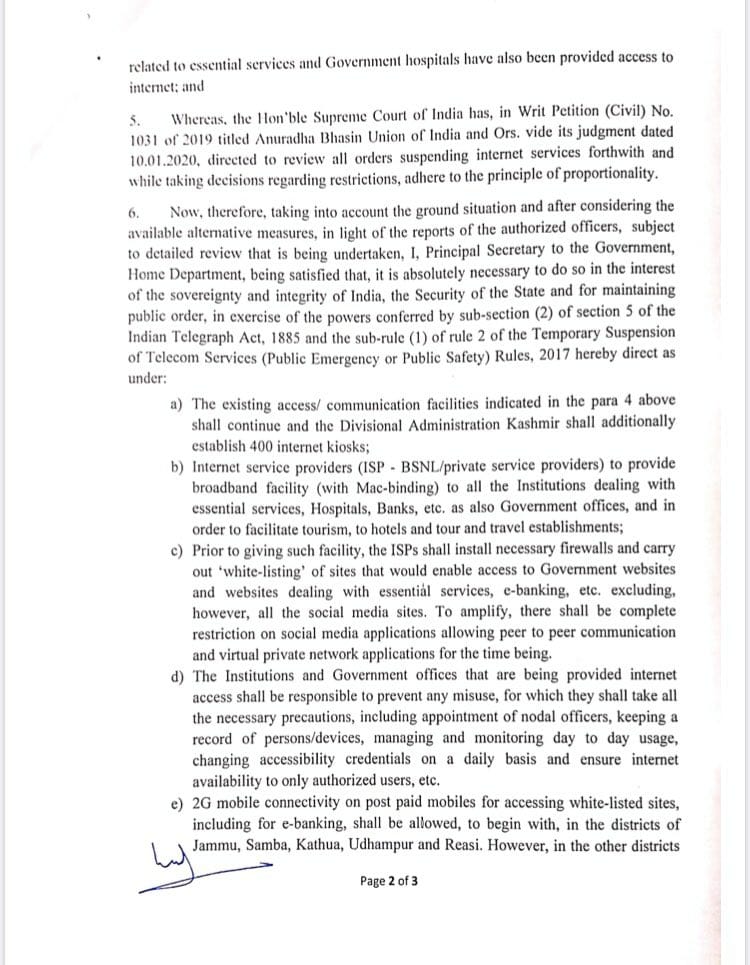 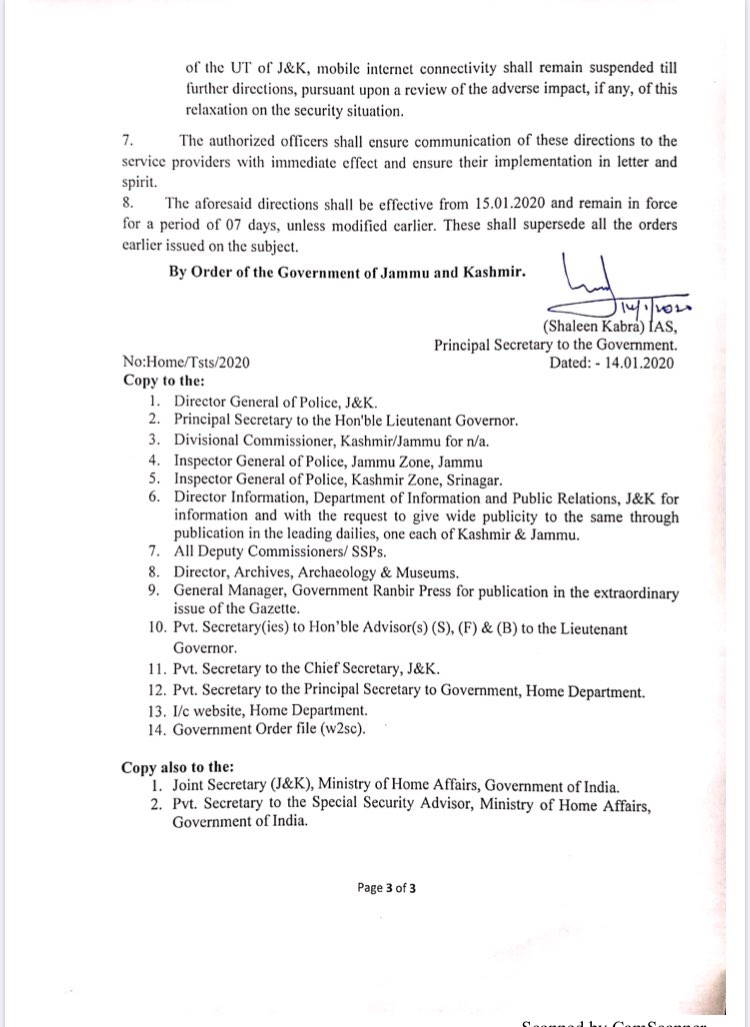