Indore: Policemen Beat Up Man Because His Mask Slipped From Nose

Two constables were suspended after a video of the incident went viral. 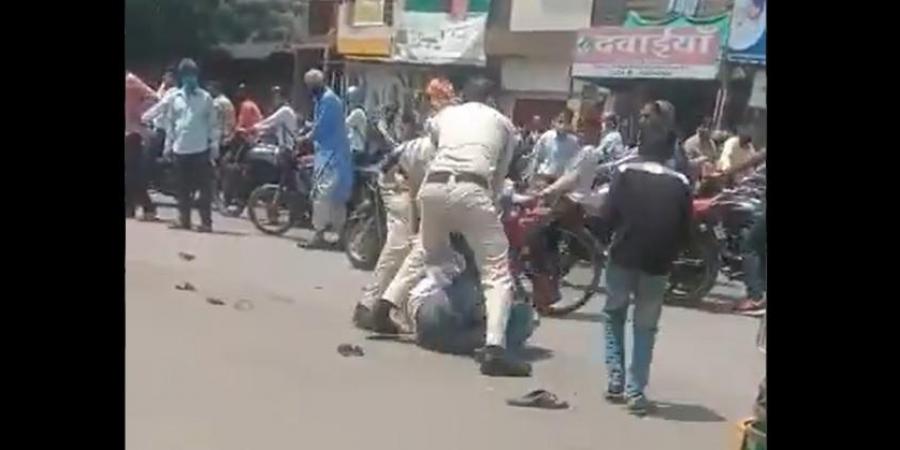 A screenshot from the video of the assault.

New Delhi: A 35-year-old rickshaw driver, Krishna Keyer, was allegedly beaten up by two police constables on the road in Madhya Pradesh’s Indore city on Tuesday after a dispute over not wearing a face mask properly.

Only after a video of the incident went viral on social media, were both policemen – Kamal Prajapat and Dharmendra Jat – suspended. In the video, the two policemen are purportedly seen thrashing the man on the street even as his teenage son and some women beg for mercy.

According to NDTV, Keyer was on his way to the hospital to meet his father and his mask had slipped off his nose. The policemen caught him and insisted that he come to the police station with them; when he refused, they started beating him up.

Despite Keyer’s son’s screams for help, nobody came to the man’s rescue and the policemen did not stop, the channel reported.

Superintendent of Police (East) Ashutosh Bagri said the two constables seen in the video have been suspended and a City Superintendent of Police (CSP) has been asked to investigate the matter. Bagri claimed the victim was not wearing a face mask in public and the policemen stopped him to seek explanation for violating the COVID-19 norm. The man grabbed the collar of one of the constables and started abusing and assaulting him and his colleagues, the police officer claimed.

“The video of the incident which is going viral on social media has been edited and cropped to tarnish the image of the police,” Bagri said.