India's Fate Hangs in the Balance, Only the Supreme Court Can Save Us Now

In their blind pursuit of a model of nationhood that stands discredited, Messrs Modi and Shah have brought India and Kashmir to the edge of a precipice. 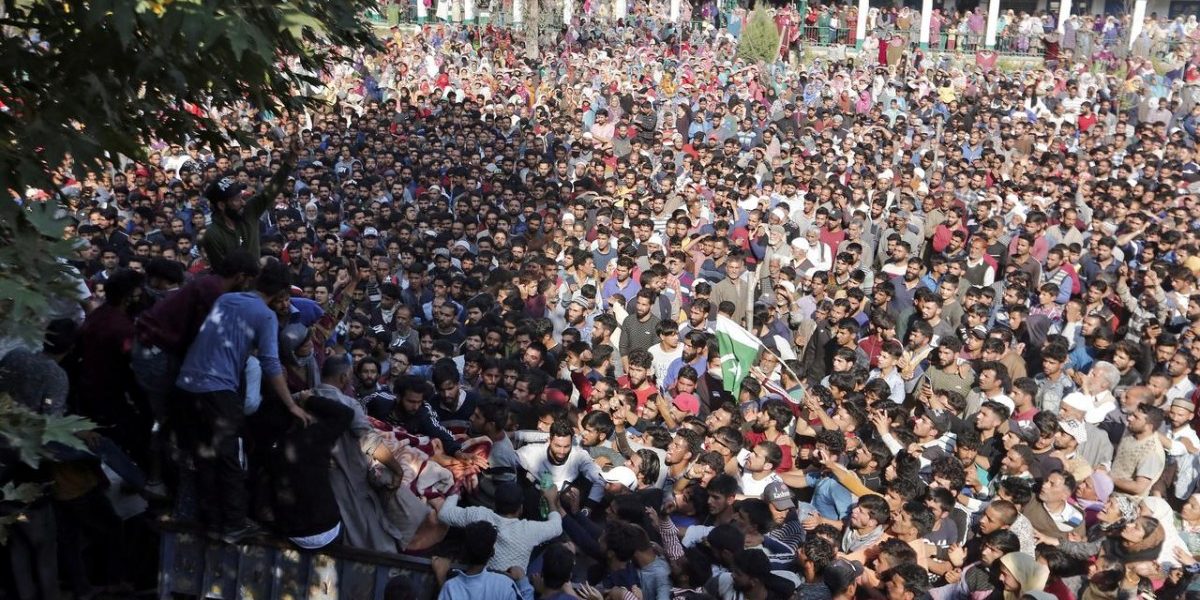 Kashmiri men gather around the body of Nasir Ahmad, a suspected militant, during his funeral after he was killed in a gun battle with Indian soldiers, in Arwani village in south Kashmir's Anantnag district, October 16, 2019. Photo: Reuters/Danish Ismail

Do the learned judges of the Supreme Court – who will soon begin to hear the petitions against the way in which the Narendra Modi government hollowed out Article 370 of the constitution and dissolved a state – fully appreciate the gravity of the responsibility that a desperate civil society has placed on their shoulders?

In this invidious circumstance, the temptation to concentrate on the letter of the constitution and leave the safeguarding of its spirit to parliament must be overwhelming. But that is precisely why their lordships must resist it and, taking courage form the judgment given by the Justice J.S. Khehar-led bench upholding appeals against the National Judicial Accountability Act, reaffirm that Indian democracy has not yet attained the maturity at which its constituent parts can be relied upon not to act in a manner that endangers the structure of the whole.

In Kashmir, that danger is not merely present but palpable. Prime Minister Modi would like us to believe that eliminating Article 370, even though done by sleight of hand, would ultimately be welcomed by Kashmiris. Because apparently it will free them from the clutches of a handful of powerful and corrupt families, open the gates for investment to flood into the valley, and bring them the employment and prosperity that has so far eluded them.

He would like the court to believe that his government laid siege to eight million people and robbed them of the rights and freedoms that define their humanity for more than two months only for their own good. This is a plea that would make any civilised government squirm with shame because it implies that Kashmiris are little different from cats and dogs whom one has to discipline.

Kashmiris have begun to show that they cannot be turned into household pets within days of the government beginning to relax its iron grip upon the Valley. They are doing this by resorting increasingly to the sole mode of protest left open to them: that is non-cooperation or, to use a word all of us should be familiar with, satyagraha.

Schools and colleges are nominally open but have few teachers and fewer students; despite the lifting of curfew, shops remain closed except for the few hours permitted by militants. There has been little overt violence so far. Barring a few acts of grenade throwing and stone pelting at security forces, and the killing of a Punjabi truck driver who, in his innocence, was transporting apples from Shopian to the market in Jammu, the Valley is relatively calm.

But this is the electrically-charged calm that precedes a storm.

Among middle class Kashmiris, there is relief that their post-paid mobile telephones are working, and that they can once again communicate with their relatives, especially with those working, or studying, in the rest of India.

There is relief also among parents of school-going children, as hope revives that they may still be able to make up the time they have lost and sit for their board examinations without being at a severe handicap.

There may also have been initial relief among traders and shopkeepers as hopes of making at least limited sales in the few weeks left before the end of the festive season revived. But with only a few days left for Diwali, the tourist season and the Amarnath Yatra cut short, and the imminent shift of the Durbar to Jammu for the winter, that fugitive hope is also turning into despair.

Women protest on the streets in Kashmir. Photo: Avani Rai

As winter sets in, Kashmiris will begin to add up not only the economic, but the psychological and emotional cost of the lost summer: the lost fruit crop; lost revenues from the abrupt end of the tourist season and the Amarnath Yatra; the chasing away of thousands of migrant workers who brought revenue to the Valley; and the total absence of the Durga Puja and Dussehra rush of tourists from Bengal.

Parents will fret for the rest of the school year over the lost school time of their children; traders and shopkeepers will stare at godowns and shelves still packed with unsold goods, and wonder how they will meet their debt and the often extortionate interest they have to pay on it. Ghoda wallahs, houseboat and shikara owners , hoteliers and restaurateurs, taxi owners and drivers, and the young men from the villages who come into Srinagar, Pahalgam, Gulmarg and such places to work for them during the tourist season, will be wondering how they will subsist during the long winter that lies ahead.

Also read: Authorities Refuse to Reveal Details of People From J&K Detained in UP Jails Under RTI

So, as the nights grow longer, the power cuts become more prolonged, and the deepening cold bites into their bones, the Kashmiris’ sense of abandonment will grow stronger. Among the old, it will bring despair; among the youth, a mounting rage that, sooner or later, will break through all remaining restraints and burst out in unpredictable ways.

It is the youth whom the Modi government needs to fear. When he came to power, there were only a few Burhan Wanis among them. By the Kashmir police’s own estimates, in 2014, there were only 86 young Kashmiris in the new group of militants being nurtured jointly by the Hizbul Mujahideen, Jaish-e-Muhammad and the Lashkar-e Taiba in south Kashmir. After Modi initiated his ‘zero tolerance for terrorism’ policy, by January 2019, the security forces had killed 813 militants, of whom 235 were killed in 2018 alone. But despite, or more precisely, because of that, the number of active militants had grown to more than 300.

To those unfamiliar with the morphology of insurgency, this may sound like a small number. But readers would do well to remember that in the Khalistani insurgency of the 1980s in Punjab, there were never more than 500 ‘A’ grade, i.e gun-using militants. But they were backed by about 15,000 persons categorised as B-high, B and C grade supporters, who sympathised with, and sheltered them. That insurgency lasted for ten years and took more than 41,000 lives, and only died out when Sikh ex-servicemen living in the villages took up arms against them.

In Kashmir, the August 5 shut down and scrapping of Article 370 has come after 30 years of harsh military rule, and five years of a merciless pursuit of young Kashmiri militants who have grown up within that repressive and violent world, and have therefore no knowledge of peace.

An explosion is therefore as certain as tomorrow’s sunrise. All we do not know is what will trigger it and, given a relative paucity of firearms with the militants, what form the renewed attacks will take.

Today, all of Kashmir is watching the Supreme Court with an anxiety that borders panic. Few expect a court that has shown no sense of urgency in dealing with the petitions against the president’s order, to strike it down. But all are living in fear of another crackdown on the entire population as the date of judgment draws near. This time there will be no surprise. The people of Kashmir will be prepared for the worst, but so, unfortunately, will be the militants.

Try as I might, I see no way therefore of avoiding a return to violence. And despite Pakistani Prime Minister Imran Khan’s professed determination to keep his people out of Kashmir in order not to give Modi a chance to blame it upon Pakistani terrorists, it is difficult to see how long he will be able to keep his countrymen out of it. What will follow is anyone’s guess, but there can be no doubt that Modi has taken India into dangerous territory and that he does not know how to find a way out of.

Their Lordships’ travails will not end there. The abrogation of Article 370 is only one of the issues the constitution bench will have to pass judgment on . The other is the dissolution of a state of the Indian Union, and its subjugation to direct rule by the central government.

Law is made as much by judicial precedent as parliamentary enactment. Their lordships must therefore bear in mind that if they uphold the president’s order on this occasion, then this, or any future government in Delhi, will be able to dissolve the statehood of any other state, group of states, or even all the states of the Union, especially if it has the parliamentary majority to do it through article 368 of the Constitution.

That will open the road to turning India into a unitary nation state on the European model and realising V.D. Savarkar’s dream of creating a ‘Hindu Rashtra’. Under Article 371 of the constitution, 10 other states enjoy protections that other states do not have – a situation the government said was intolerable in the case of Jammu and Kashmir.

One has only to remember the agitations that preceded the formation of Andhra Pradesh, Tamil Nadu , Meghalaya, Nagaland, Manipur Tripura, Mizoram, Punjab, and even Gujarat, to know that any such attempt will be resisted as strongly by them as the Kashmiris are resisting it today.

In sum, if the Supreme Court allows the abrogation of Article 370 through the dissolution of the State of Jammu and Kashmir to stand, it will open the way for the future weakening and perhaps even disintegration of the Indian Union.

This is not meant to be an alarmist prediction: From the Mauryan empire after the edicts of Ashoka, till the 1857 revolt, that followed Lord Dalhousie’s promulgation of the Doctrine of Lapse, Indian history is replete with examples of attempts to centralise power beyond a point leading to the disintegration of empires.

In their blind pursuit of a model of nationhood that now stands discredited, and even despised, in Europe where it was born, Messrs Modi and Shah have brought India to the edge of this precipice. Only the Supreme Court can stop them from pushing us over it.