While the electoral dividends from deporting Rohingya maybe significant, it sets an illiberal precedent for India and will only hurdle efforts to establish the country responsible as a South Asian power and secure a seat at the reformed UN Security Council. 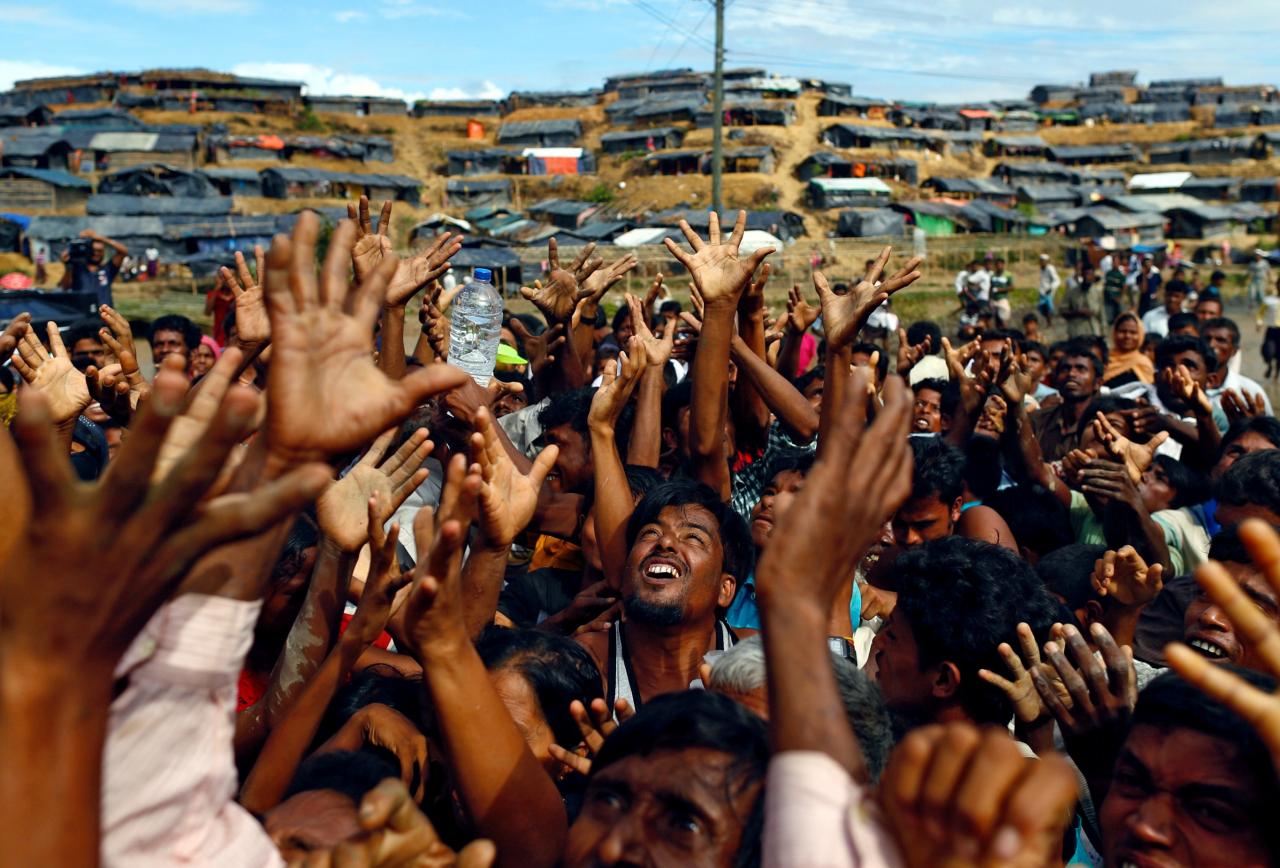 On Thursday, a three-member bench of the Supreme Court, headed by newly-appointed Chief Justice Ranjan Gogoi, refused to stop the Assam government from deporting seven Rohingya to Myanmar. The deportees, who were lodged in the Silchar Central Jail since 2012 after a Foreigner Tribunal sentenced them to detention for entering India without papers, have now been handed over to Myanmar authorities at the overland border crossing in Moreh, Manipur.

While senior advocate Prashan Bhushan argued that the move was in violation of the United Nations Charter, the apex court bench asserted that Myanmar had accepted them as citizens. Earlier this week, the UN Special Rapporteur on Racism, Tendayi Achiume, warned that the move is “flagrant denial” of the refugees’ “right to protection” and even “amounts to refoulement.”

On the same day as the Assam government’s deportation decision was reported, Union home minister Rajnath Singh, during the 23rd Eastern Zonal Council meeting in Kolkata, had announced the Centre’s decision to ask states to identify Rohingya refugees and collect their biometric details. Accordingly, every state government is supposed to send a report to the Centre, which will then take it up with Myanmar through diplomatic channels and “get it resolved.” 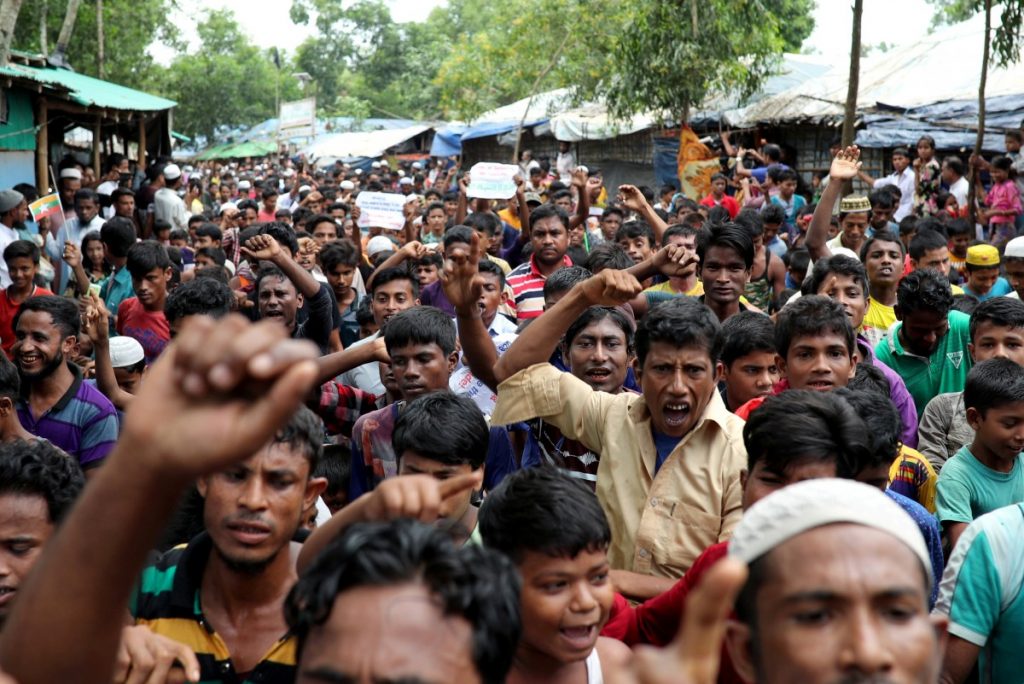 State government’s have been asked to send a report of biometric details of Rohingya refugees to the Centre. Credits: Reuters/Mohammad Ponir Hossain

Mass deportations on the way?

At the very outset, it must be noted that the prolonged detention period (six years) of the seven Rohingya who were deported to Myanmar on Thursday is itself deeply concerning. It brings to question the judicial morality of Assam’s peculiar foreigner tribunals that often deliver harsh prison sentences to suspected foreigners, including those fleeing persecution in neighbouring countries.

Further, the home minister’s statements make it amply clear that the BJP-led government in New Delhi has plans to deport (at least) some sections of the Rohingya refugee community currently living in India before next year’s general election. For the BJP – under whose watch India has seen a sharp rise in anti-immigrant rhetoric – the electoral dividends from deporting “illegal” Rohingya Muslims could be significant.

For the country, however, this is an alarming policy decision. While the Indian legal system does not categorically address the issue of forced return of refugees, deporting the Rohingya back to Myanmar, where they face a severe threat of persecution, amounts to a complete violation of India’s international legal obligations and domestic judicial precedents laid down by various courts.

For the BJP – under whose watch India has seen a sharp rise in anti-immigrant rhetoric – the electoral dividends from deporting “illegal” Rohingya Muslims could be significant.

More importantly, deportation of the stateless Rohingya to Myanmar, where they risk being killed, tortured, and violently persecuted, is an utterly inhuman act. Only last month, a UN fact-finding mission categorically accused the Myanmar military of committing acts with genocidal intent against the Rohingya in northern Rakhine. The violent military campaign ultimately led to the expulsion of more than 800,000 Rohingya men, women and children to neighbouring Bangladesh, triggering one of the worst humanitarian crises in modern history.

Yet the Indian government and Supreme Court seem to have shut their eyes to the deeply worrying situation in the Rakhine state.

In several affidavits submitted to the apex court since last year, the Centre has argued that India can legally deport the Rohingya to Myanmar since it is not party to the 1951 Convention on Refugees and its 1967 Protocol. Both these legal instruments enshrine the principle of non-refoulement or the obligation of state parties to not return refugees to countries where they face a clear threat of persecution.

Watch | Is the Deportation of Seven Rohingya Part of Modi’s ‘Anti-Muslim’ Politics?

While this is true, other international treaties that India has signed or ratified mandate a legal responsibility to not deport vulnerable refugees groups to their home countries. This is in addition to core obligations under customary international law. The UNHCR had asserted this clearly when there was an amplification of the demand to deport the Rohingya last year.

The most prominent source of these international legal obligations is the International Covenant on Civil and Political Rights (ICCPR), which India acceded to in 1979. According to the interpretation of the UN Human Rights Committee – the official body that monitors the ICCPR’s implementation by state parties – and advisories issued by the UNHCR, Article 6 (right to life) and 7 (right to be free from torture and other cruel, inhuman or degrading treatment) of the covenant apply to not just the refugee’s host country, but also the country where they are to be sent back.

India has also signed the Convention Against Torture (CAT), Article 3 of which expressly prohibits countries from returning refugees back to countries where they risk being tortured. However, India still hasn’t ratified the CAT, which does not legally obligate it to abide by the provisions of the treaty. Yet, signing it implies India’s intentions to move towards adhering to the CAT. Plans to deport the Rohingya back to Myanmar reverse this intention. 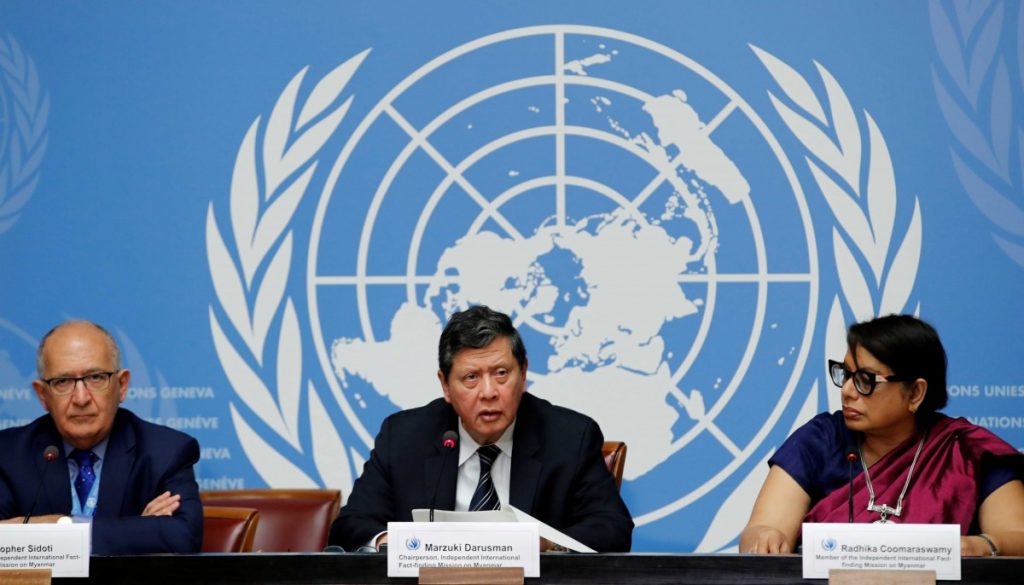 Further, India is also a signatory to the 1966 Bangkok Principles on the Status and Treatment of Refugees, Article III of which expressly bars states from returning or expelling asylum seekers and refugees to a country where their “life or freedom [would be] threatened on account of [their] race, religion, nationality, ethnic origin, membership of a particular social group or political opinion.” Although this is a legally non-binding instrument, any administrative conduct or policy that contravenes the provisions of the instrument counts as bad state practice.

Even if one concedes the absence of a singular legally-binding treaty provision that bars India from deporting the Rohingya, one must note that non-refoulement has now attained the status of a ‘peremptory norm’ of international law (see UNHCR advisory on non-refoulement, page 11). In other words, it comes under customary international law, implying that India is obligated to abide by the principle regardless of its ratification (or non-ratification) of any agreement that enshrines it clearly – for example the 1951 Convention or its 1967 Protocol. It is for this reason that India has frequently declared at UN forums that the country abides by the principle.

Besides international law, India’s own courts – including the Supreme Court – have set multiple case precedents on non-refoulement. For example, in Ktaer Abbas Habib Al Qutaifi vs Union Of India And Ors (1998), the Gujarat high court explicitly recognised the principle (under a distinct sub-section) in context of the proposed deportation of two Iraqi refugees to their home country. Remarkably, the judgment not only meticulously cites provisions under international law that prohibit countries from undertaking such deportations, but also argues that Article 21 of the Indian constitution (right to life) encompasses the non-refoulement principle.

Furthermore, the Supreme Court made similar observations in State Of Arunachal Pradesh vs Khudiram Chakma (1993) and NHRC vs the State of Arunachal Pradesh. The common underlying principles of these judgments were that India is bound by a matrix of international and domestic legal norms that restrict the state from arbitrarily returning a refugee to her or his home country if there is a clear threat of persecution or risk to life.

Also Read: Despair and Desolation: Life in a Rohingya Refugee Camp in Delhi

While the international conventions and domestic cases all recognise a reasonable exception to non-refoulement, that is ‘national security’, one can only press to understand how the seven alleged Rohingyas who were deported by the Assam government could pose a threat to India’s national security.

Out of the frying pan, into the fire

Besides the clear legal violations, the deportation sets a dangerous precedent in illiberal and inhuman state practice. The situation next door is far from suitable for any kind of refugee return.

Since August 2017, northern Rakhine has been, quite literally, up in flames. From mass gang rapes of Rohingya women to the consignation of live babies to fire, Myanmar’s Rohingya community has faced the worst imaginable horrors at the hands of the Burmese army and its ethnic Rakhine vigilante affiliates.

As the UN report concurred without mincing words, Tatmadaw’s actions against the Rohingya count as “crimes of the highest order under international law” and belie all accepted norms of civility and imagination. According to the a conservative estimate, more than 10,000 Rohingya were killed and dozens of villages razed to the ground since August last year. 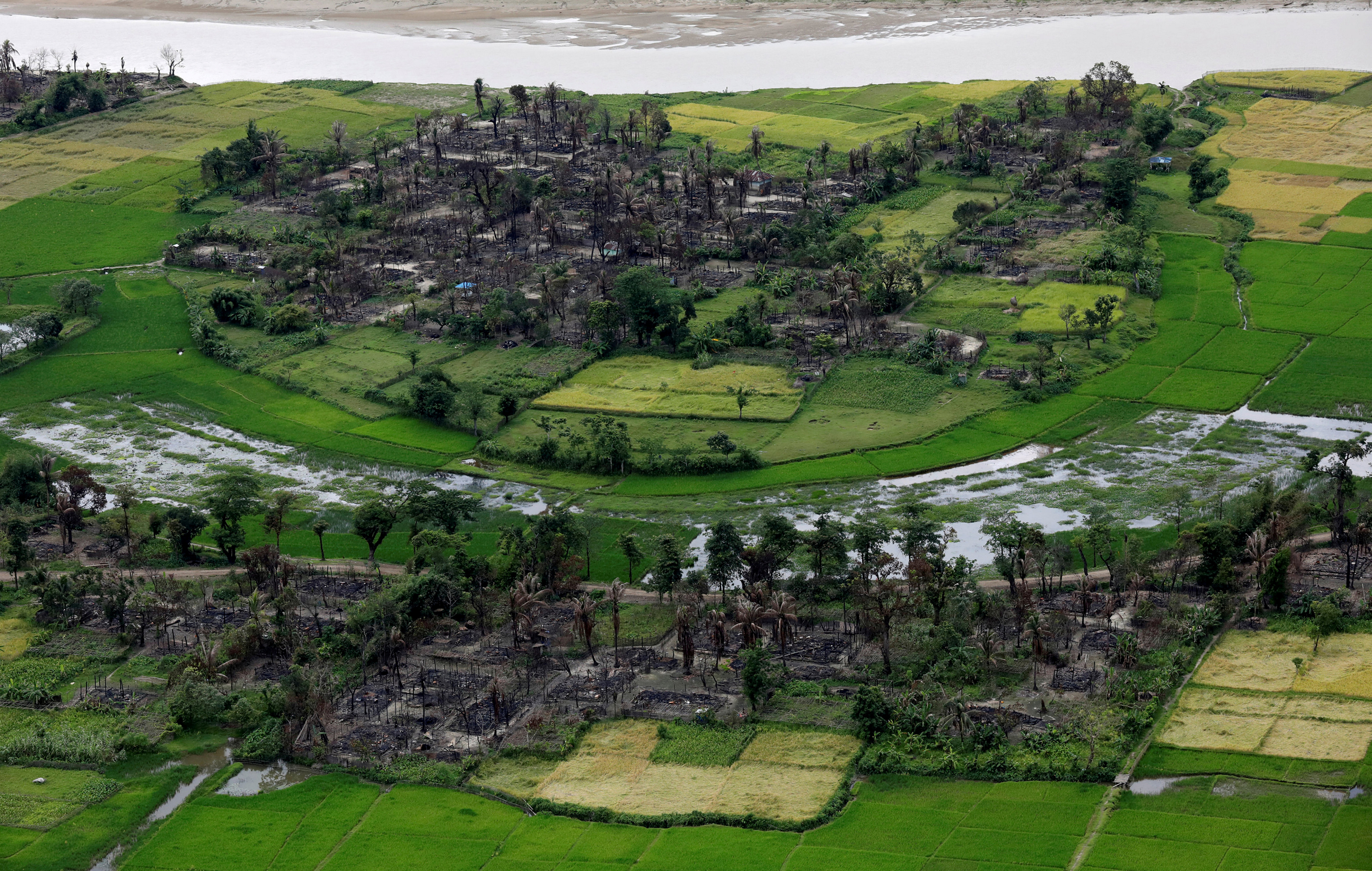 But, the recent violence was just a climactic manifestation of decades of systematic persecution of the Rohingya by the Burmese state, which since 2012, has actively fueled majoritarian hatred against the minority community and disenfrachised them in an organised fashion. The onset of the democratic transition did little to change this discriminatory state practice, which the Mission referred to by its right name: apartheid.

It particularly emphasised the fact that any returning Rohingya would face the same trying conditions of persecution. There are little to no indications that the situation has improved even marginally or that the Rohingya would be better off today if they return.

In such a situation, deporting even a single Rohingya amounts to refoulement. It also counts as an unfortunate reversal of its longstanding democratic tradition of giving shelter to vulnerable people and groups fleeing persecution and violence in their home countries (recall the Tibetans, Sri Lankan Tamils and Chakmas from Bangladesh).

For the stateless Rohingya, the ordeal of forced displacement is even more pronounced since they do not hold citizenship of any country, including Myanmar. The Supreme Court bench’s assertion that the seven deported Rohingya have been accepted as “citizens” by Myanmar, thus, remains unverified for now. Under the guise of recognising the Rohingya as citizens, the Myanmar government has been doling out “National Verification Cards” (NVCs) to the community, which doesn’t recognise them as Myanmar nationals (or Rohingya), but rather as immigrants from Bangladesh. This is simply a shrewd tactic to allay concerns of non-citizenship and quell opposition from external quarters.

Thus, the Narendra Modi government, instead of pandering to majoritarian sentiments, should heed UN secretary general Antonio Guterres’ suggestion during his visit to New Delhi this week: pressurise Myanmar to not just take back the Rohingya, but also create conditions for their safe, dignified and sustainable return.

Under the current scheme of things, India’s journey to become a responsible South Asian power and eventually secure a seat at the reformed UN Security Council will only be relegated further down the ladder of aspirations.