India restricted internet use more than any other nation, with 8,927 hours of blacked out or curbed bandwidth access during the year, a report by a UK-based research group showed.

New Delhi: In 2016, the United Nations condemned internet access disruption as a human rights violation. Despite this, governments across the world have been shutting down citizens’ access to the web with impunity. The upshot is a huge economic loss.

A UK-based digital privacy and security research group, Top10VPN, noted in its report titled Global Cost of Internet Shutdowns that in 2020, internet shutdowns in India cost the economy $2.8 billion, almost double compared with 2019. This pushed India to the highest-rank among the 21 South Asian countries that curbed internet access last year.

India restricted internet use more than any other nation, with 8,927 hours of blacked out or curbed bandwidth access during the year, Bloomberg reported, citing the report.

The cost of internet shutdowns was calculated using indicators from groups including the World Bank, International Telecommunication Union, and the Delhi-based Software Freedom Law Center, the report added.

Another report by the US-based research group Freedom House observed that in 2020, seven million people were affected due to the Internet blackout in Kashmir that began in August 2019 and continued throughout 2020 – becoming the longest shutdown imposed by a democracy. Apart from that, localised Internet shutdowns were imposed during protests across the country.

India had the highest number of government-imposed internet shutdowns between January 2012 and September 2020, with the government cutting internet access at least 437 times during the period. In 2019, the government’s forced internet blackouts lasted over 4,000 hours, leading to a loss of over $1.3 billion, third in the world’s most economically affected countries, after Iraq and Sudan.

According to reports, India was responsible for 67% of the world’s documented shutdowns in 2018. 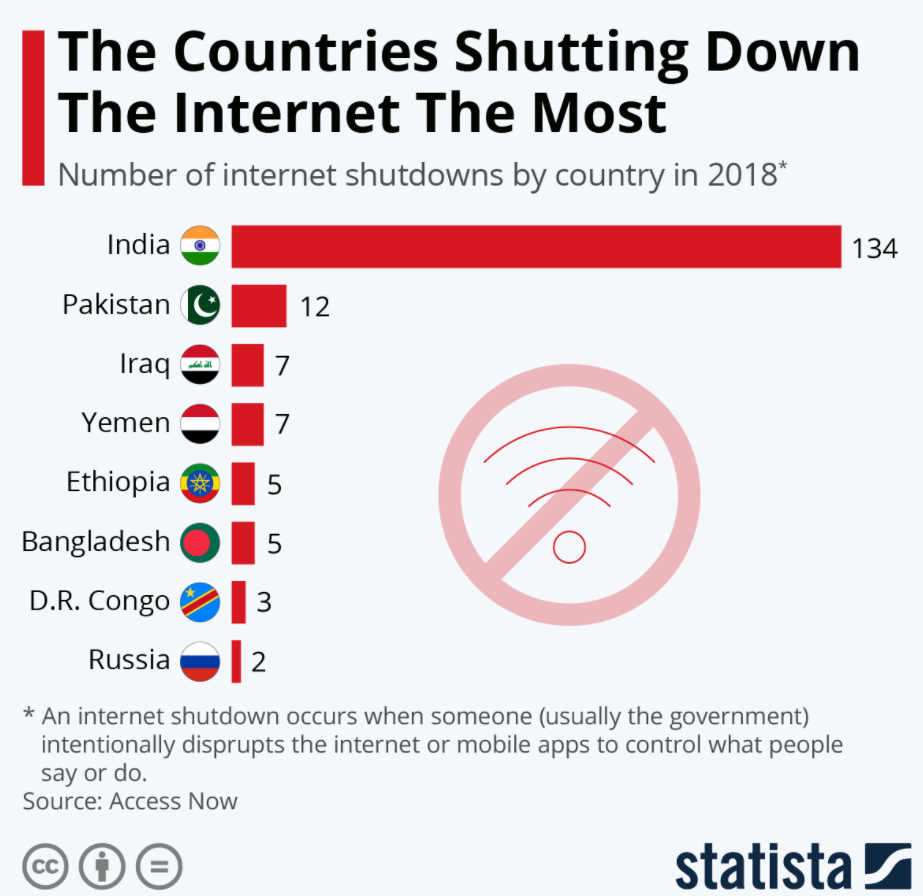 In terms of internet freedom worldwide, Iceland ranked first with 95 index points, according to the Freedom House Index’s report titled Internet freedom in selected countries in 2020. China occupied the last place, scoring only ten index points based on various factors including obstacles to access, limits on content and violations of user rights.

In 2019, according to Freedom House Index ratings, India was labelled a partially free democracy with a score of 55 points out of 100 on the freedom of internet parameters.

According to Top 10VPN, bandwidth restrictions in Kashmir affected access for medicines, businesses and schools despite the easing of a seven-months-long closure in March.

Belarus suffered the most economically after India, with $336.4 million lost to 218 hours of blackouts and curbs affecting 7.9 million people, amid protests following a controversial presidential election. During the period of restrictions, the report documented a 650% spike in demand for virtual private networks in Belarus, the report said.

Myanmar imposed blackouts and throttled bandwidth for 5,160 hours in 2020 amid continuing restrictions in the Chin and Rakhine regions, it said. Yemen lost $237 million to 912 hours of internet disruptions.

About 42% of the shutdowns were associated with additional human rights abuses including restrictions on freedom of assembly, election interference and infringements on freedom of the press, it said.