The countries that ranked in the top 10 are New Zealand, Switzerland, Hong Kong, Denmark, Australia, Canada, Ireland, Estonia, and Germany and Sweden.

New Delhi: India was ranked 111th out of 162 countries in the Human Freedom Index 2020 report released by the Cato Institute, plummeting 17 spots from its position in the last index.

India registered a score of 6.43, which is lower than the average human freedom rating of 6.93 for the 162 countries which were rated by the index. Personal freedom in India was given a score of 6.30 by the report, while economic freedom was rated 6.56.

The countries that ranked in the top 10 are New Zealand, Switzerland, Hong Kong, Denmark, Australia, Canada, Ireland, Estonia, and Germany and Sweden (with the last two tied in the 9th place). While Japan ranked 11th, the UK and the US were tied in the 17th place. At the other end of the spectrum, Syria was ranked the worst, followed by Sudan, Venezuela, Yemen and Iran.

The index is calculated using 76 “distinct indicators of personal and economic freedom” in areas such as rule of law, security and safety, religion, legal system and property rights, and access to sound money.

The HFI covers 162 countries for 2018, the most recent year for which the Cato Institute said sufficient data was available. 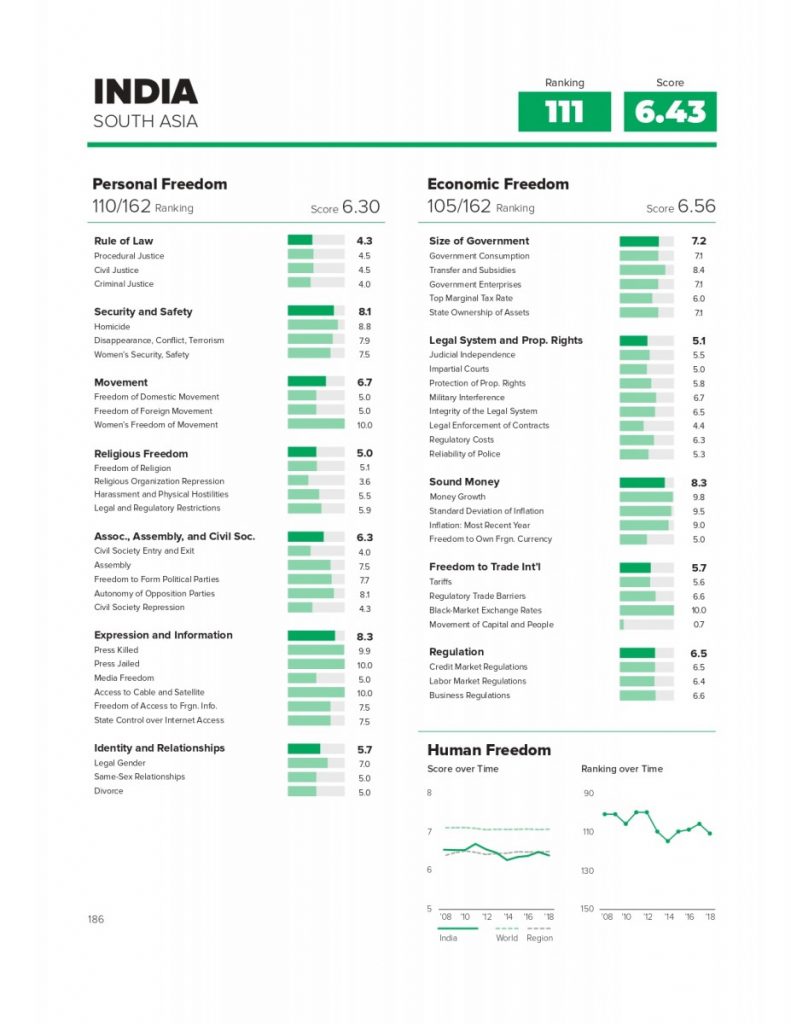 “Comparing all the countries for which we have the same data available since 2008, the level of global freedom has decreased slightly (−0.04), with 70 countries in the index increasing their ratings and 70 decreasing,” the report says.

Only 15% of the world’s population lives in the top quartile of countries in the HFI, and 34% live in the bottom quartile. The gap in human freedom between the most free and the least free countries has widened since 2008, increasing by 6% when comparing the top and bottom 10% of nations in the HFI.

“Out of 10 regions, the regions with the highest levels of freedom are North America (Canada and the United States), Western Europe, and East Asia. The lowest levels are in the Middle East and North Africa, sub-Saharan Africa, and South Asia,” the report added.

Women-specific freedoms are strongest in North America, Western Europe, and East Asia and are least protected in the Middle East and North Africa, sub-Saharan Africa, and South Asia.

The HFI also found a strong relationship between human freedom and democracy, with the exception being Hong Kong. However, the report says that the impact of the Chinese Communist Party’s unprecedented interventions in the territory in 2019 and 2020 – which are not reflected in this year’s report since it was based on 2018 data – are likely to see Hong Kong’s score decrease noticeably in the future.

“The findings in the HFI suggest that freedom plays an important role in human well-being, and they offer opportunities for further research into the complex ways in which freedom influences, and can be influenced by, political regimes, economic development, and the whole range of indicators of human well-being,” the report says.

In a blog, one of the authors of the report said that personal freedom around the world has seen a “notable decline since 2008″. Overall freedom has also declined, though to a lesser degree, over the same time period.” Of the 12 major categories that we measure in the report, all but five have seen some deterioration, with freedom of religion, identity and relationship freedoms, and the rule of law seeing the largest decreases,” the blog added.

This is the latest index released this year to have downgraded India’s ranking. In April, India was ranked 142nd in the Press Freedom Index, followed by a fall of 26 spots in the global economic freedom index in Septemeber. India has also registered low scores on indices on academic freedom and internet freedom.