South Kashmir was gripped by a phenomenon nobody had imagined: civilians relentlessly intruding to try and save rebels from encounters with security forces. 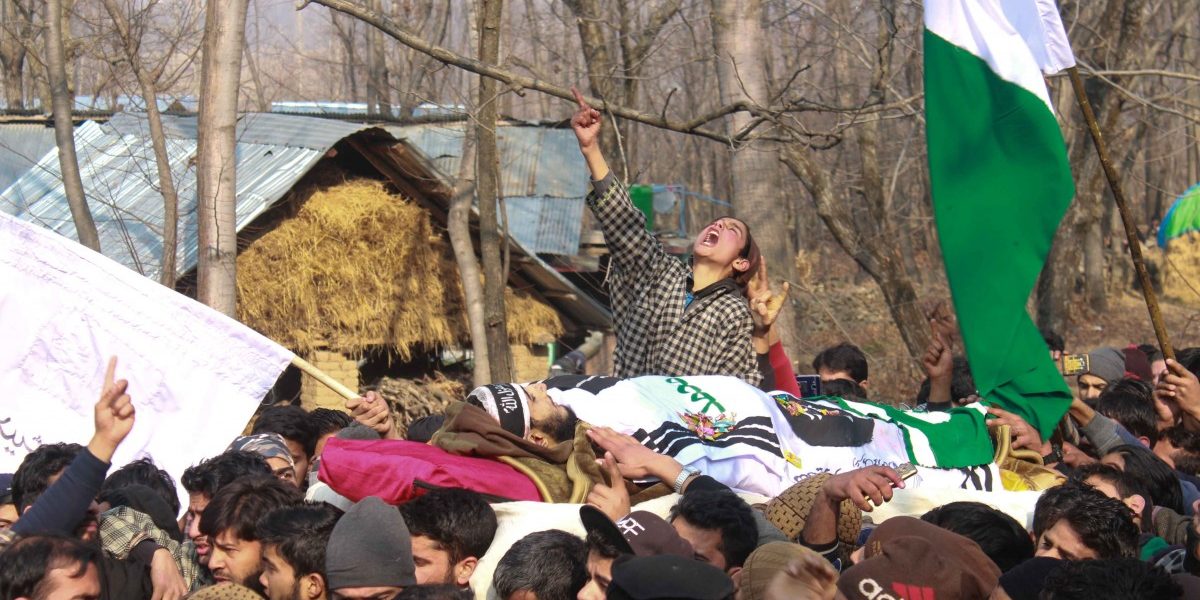 Younger brother of Fardeen Khanday, 13, shouting slogans in his funeral. Fardeen, a slain rebel associated with Jaish-e-Mohammad, was killed in a gunfight after he and his two associates attacked a CRPF camp in Lethpora area of South Kashmir’s Pulwama district on Januay 1, 2018. 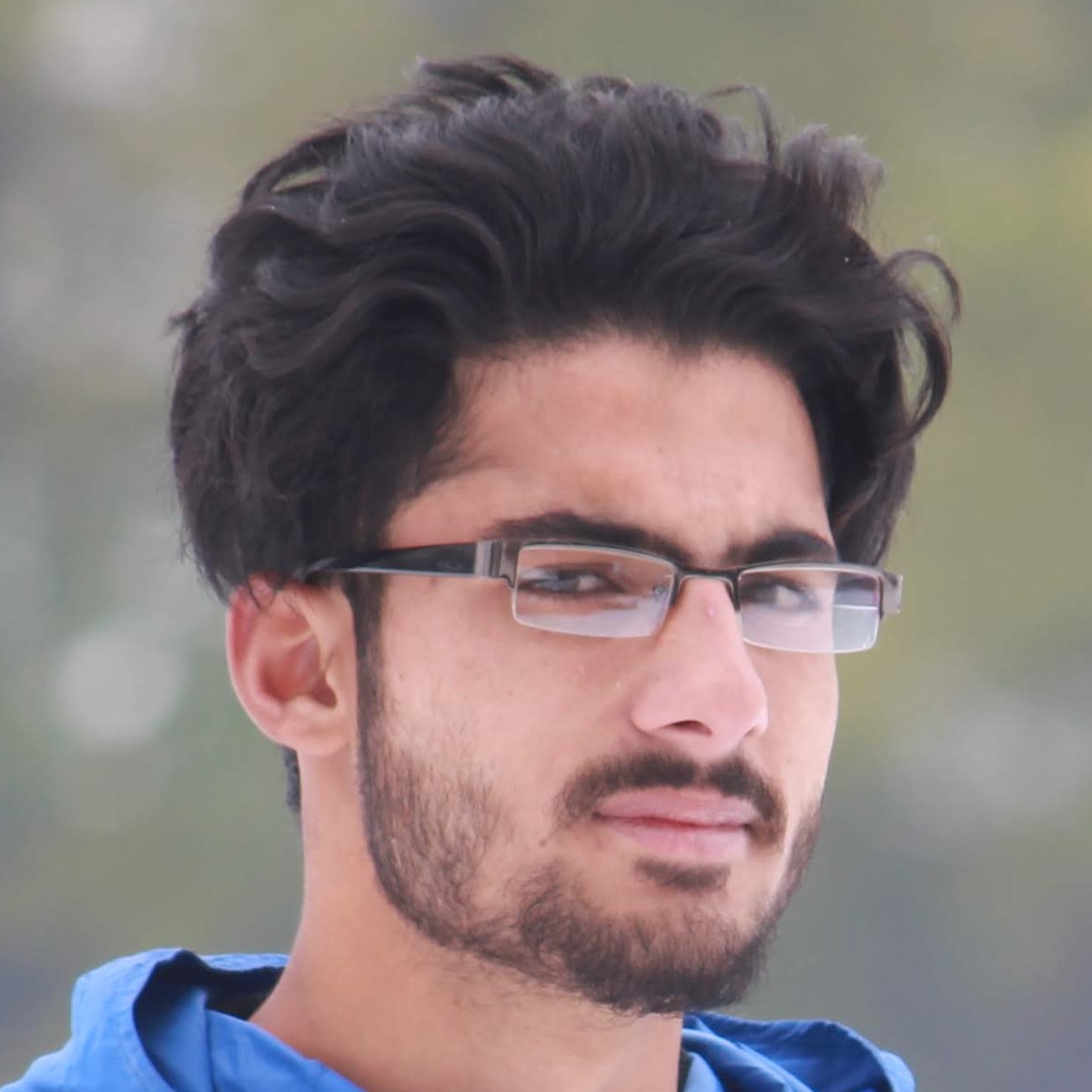 The graves are still fresh and the soil has not yet settled. Behind the statistics of those killed in Kashmir in 2018 lie heart-wrenching stories. No one knows exactly how many are injured and maimed for life; only the dead find themselves counted. If CASO (cordon and search operations) was a common refrain, so were ‘collaborator’ and the ‘collateral damage’. 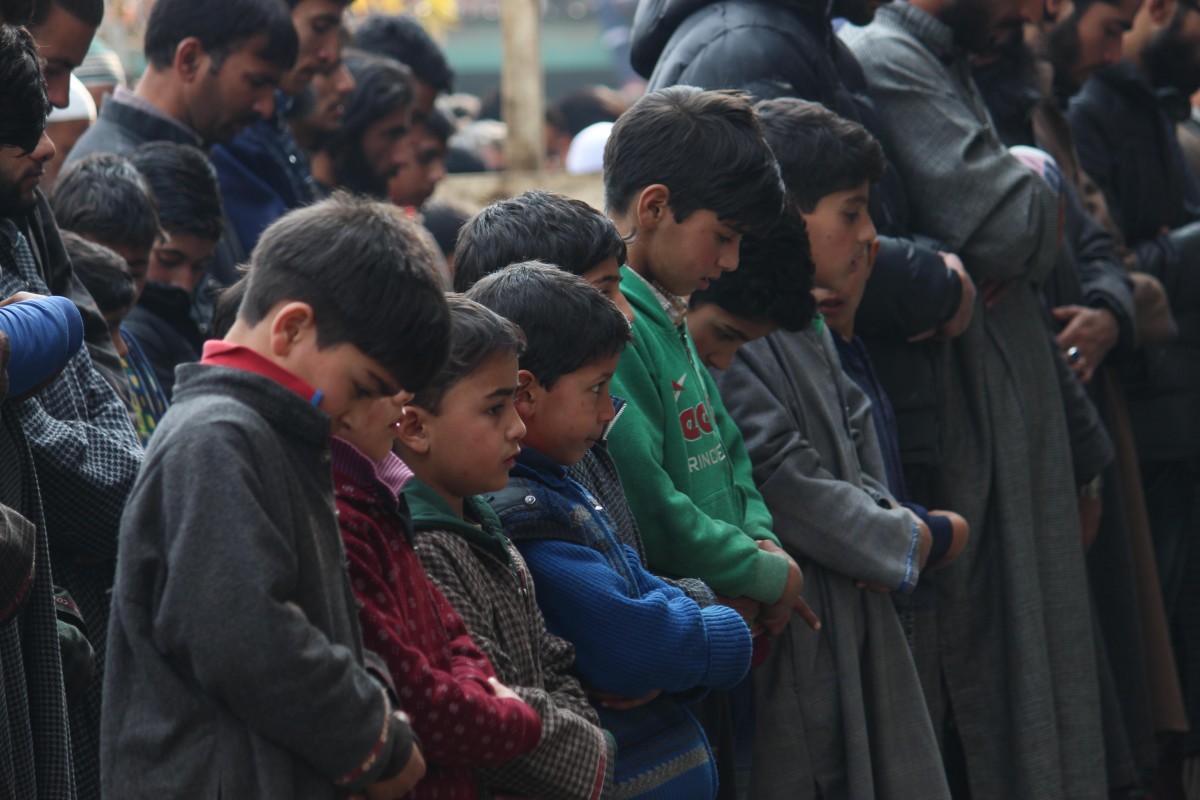 Children lined up at the funeral prayers for Liyaqat Ahmad, a Hizb rebel killed in an encounter in Tikken village of Pulwama on November 10. Children in Kashmir grow up amidst continuous  abductions, encounters, bomb blasts, stone pelting and tear-gas shelling.

A father struggling to send his son to school – only to receive him in a body-bag even before his class tenth results were announced – is a disturbing reality. Numan has passed the examination; the results were announced a few days ago. Like him, there are 160 civilians who were killed this year, according to a report by Jammu and Kashmir Coalition of Civil Society. 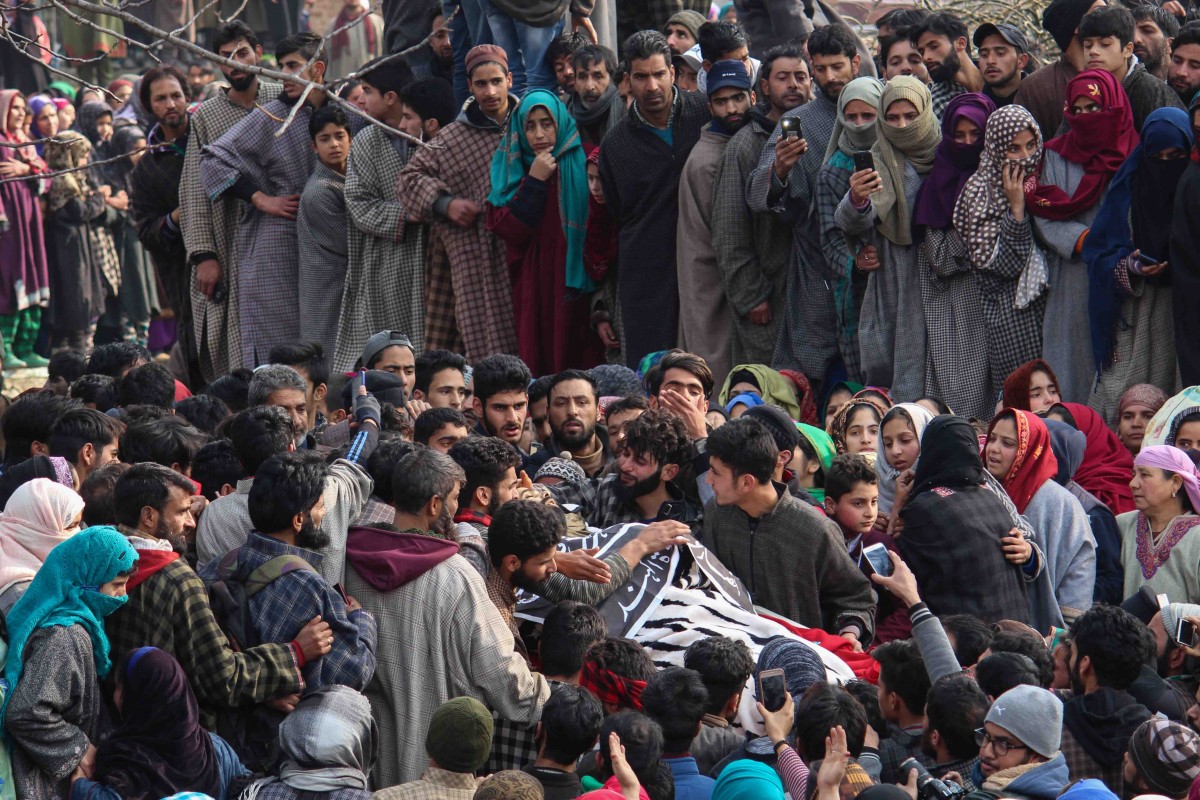 The year 2018 has been the bloodiest in a decade, with frequent confrontations between rebels and security forces across Kashmir, killing 159 Indian soldiers and policemen, and 267 armed fighters. 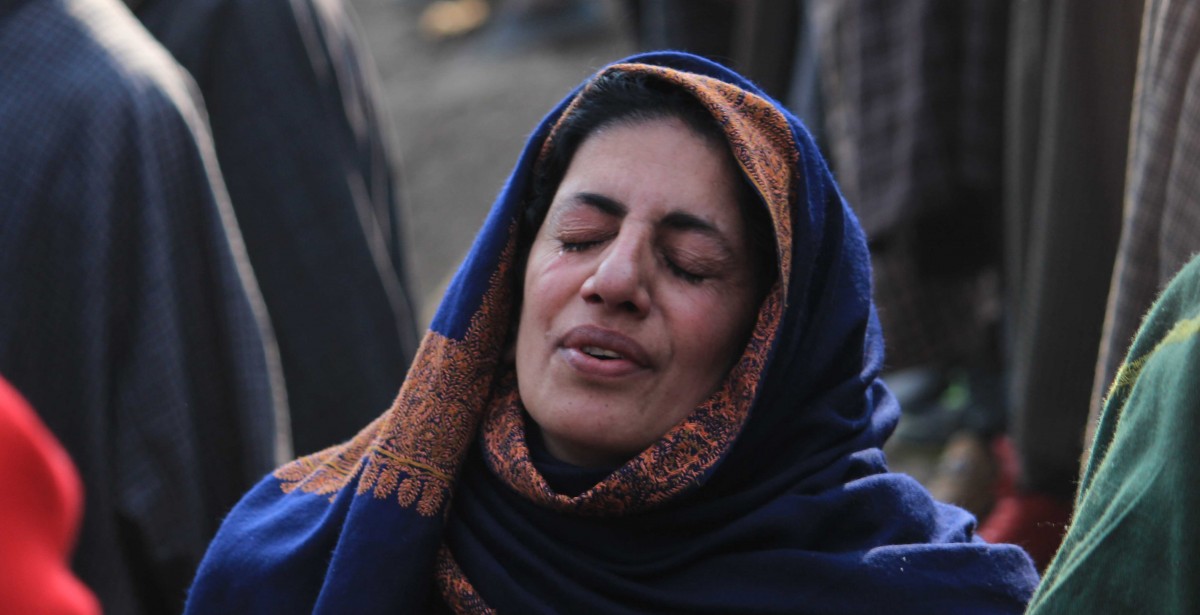 A woman grieves on the death of Firdous Ahmad, a local rebel who was killed during a gunfight in Balpora village of South Kashmir’s Shopian district on January 25, 2018. Women in Kashmir bear the brunt since the separatist uprising broke out in the region in 1989.

Most of the militants killed belonged to the four districts of South Kashmir, the area in focus after the killing of the Hizbul Mujahideen commander Burhan Wani in 2016.

Students and teenagers continued to gravitate into the militant ranks, leaving no one with a clear explanation why. Civilians in thousands continued to throng the funerals of the rebels, “martyrs” to them, offering multiple rounds of funerals.

This has no precedent in recent history. 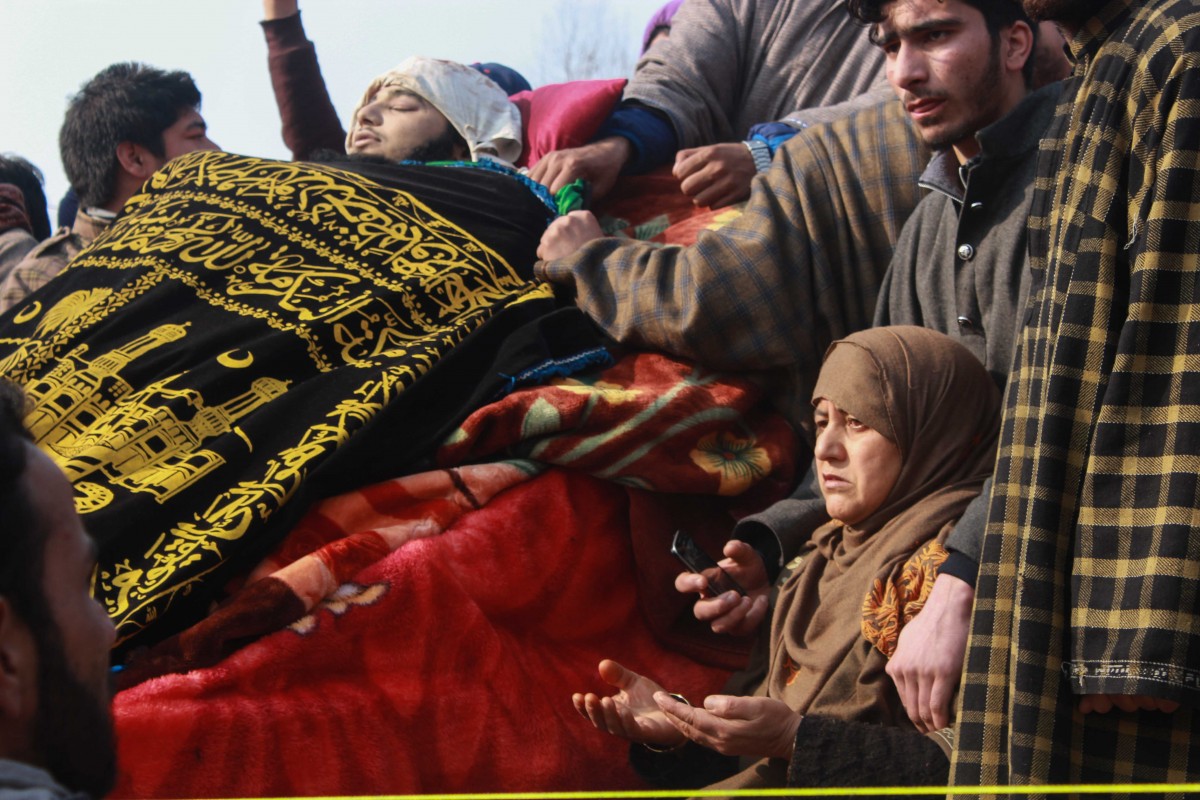 The mother of Farhan Wani prays next to her son’s body in Khudwani village of Kulgam district. Eighteen-year-old Wani was one of the rebels killed in Larnoo village of Anantnag district.

What followed was something no one had even imagined: Frequent cordon and search operations, and civilians relentlessly intruding to try and save rebels from gunfights and nocturnal encounters. 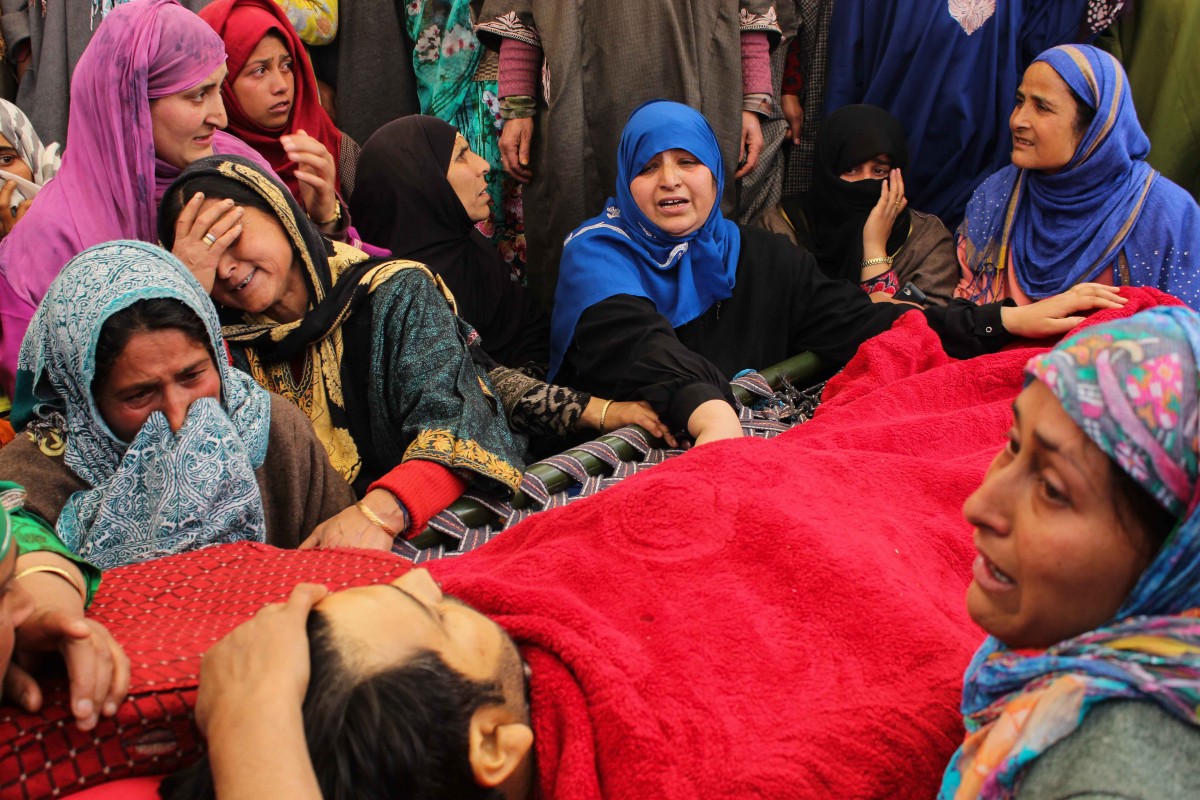 Sharjeel’s body lying right before the eyes of his fiancé, Mahjabeena. Sharjeel was one of the four civilians killed during an encounter in Khudwani village of South Kashmir’s Kulgam district on April 11, 2018. South Kashmir witnessed a large number of civilian as well as rebel killings in 2018.

The security establishment remains helpless to stop educated young people from joining the militant ranks: Mannan Wani, a research scholar at Aligarh Muslim University (AMU) killed in Handwara district on October 11. Subzar Sofi, an IAS aspirant. Or Mohammad Rafi Bhat, a Kashmir University lecturer killed only hours after joining – even after police offered him safe surrender, on a video that went viral. 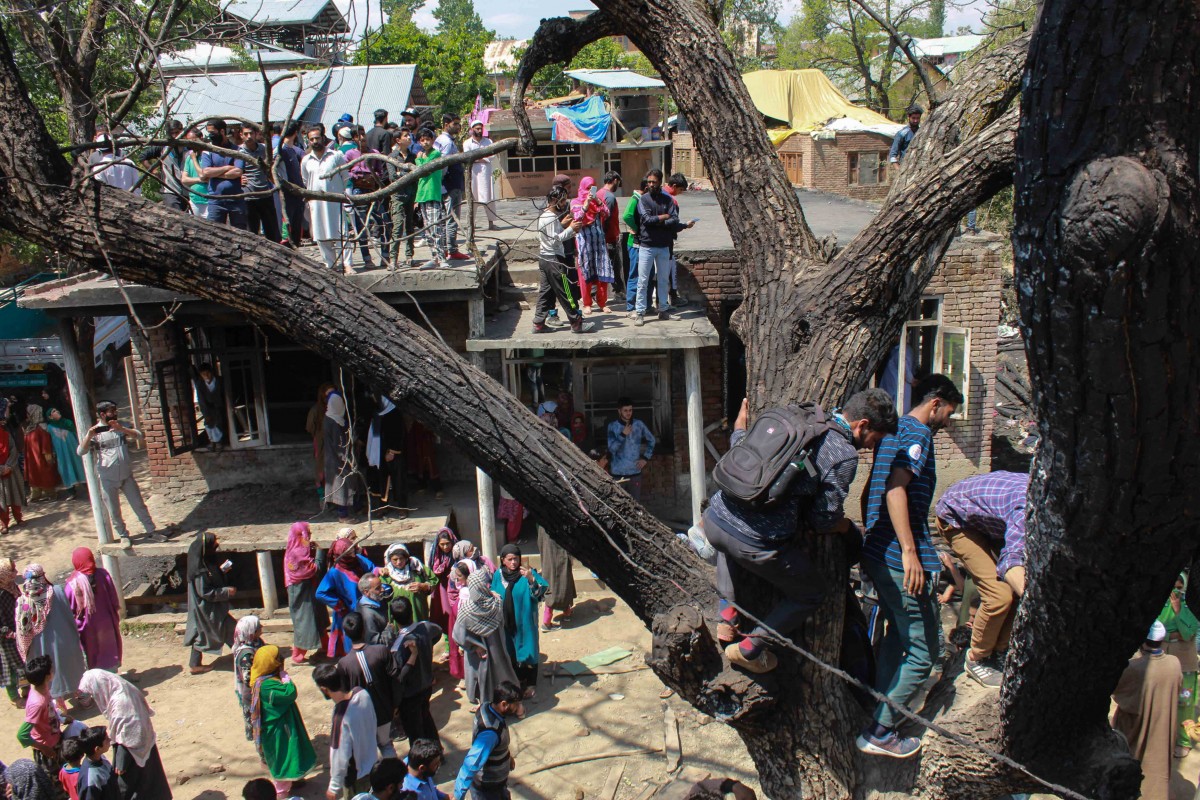 Locals inspect a destroyed house where two rebels, including Sameer Tiger, a top commander of Hizb-ul-Mujahideen,were killed on April 30, 2018. Such scenes were common in 2018.

The Jammu and Kashmir Police took the brunt of the spiralling situation; 45 of its personnel were killed.

Following the alleged burning of militants’ homes and mistreatment of their families, militants called for police personnel to resign or face ‘consequences’.  On September 21, three Special Police Officers (SPOs) were kidnapped from Kapran village in Shopian district. Their dead bodies were found in an orchard nearby.

Afterwards, many police personnel took to social media announcing their resignations. Internet services were shut down in the district. Relatives surround the bodies of two civilians, Talib and Mukeem, in Laroo village of Kulgam on October 21, 2018. Talib and Mukeem, two teenagers from the same village, were among the six civilians who had thronged to an encounter site and were killed when a shell exploded there. 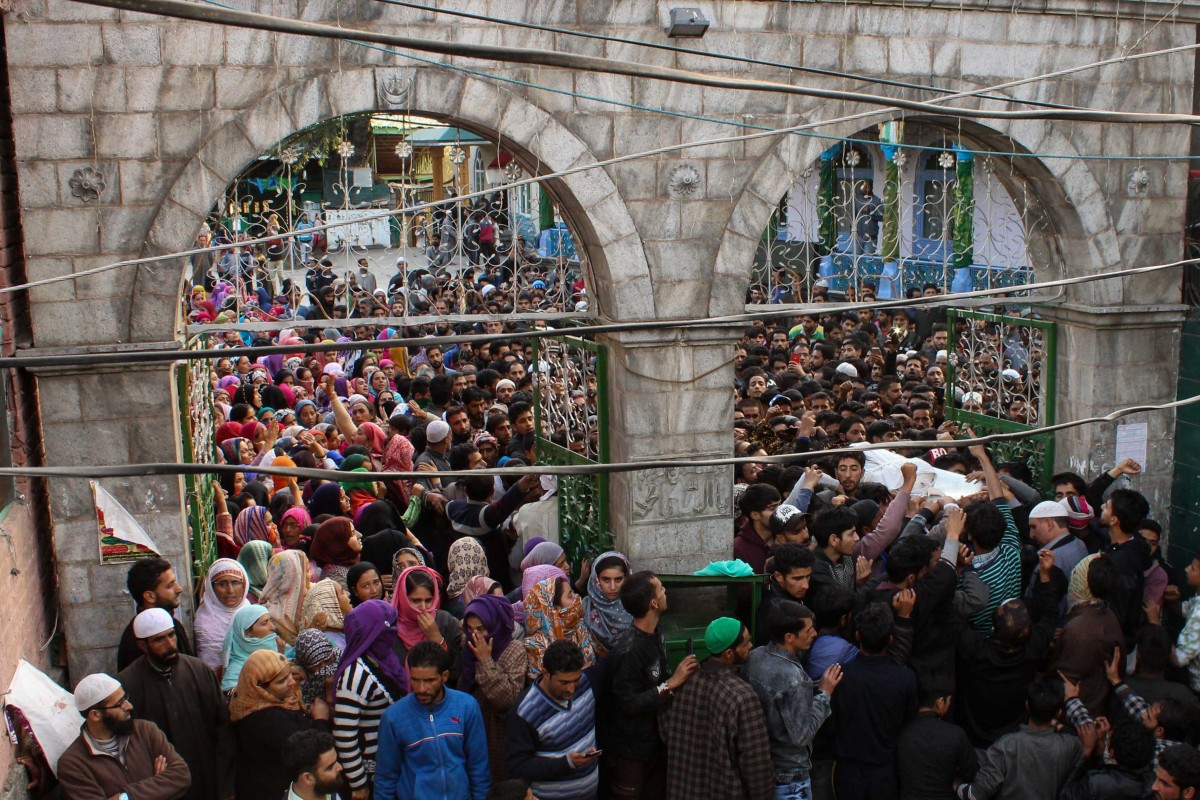 Supporters carry out the body of Uzair Mushtaq from a shrine in Kulgam district of south Kashmir. Uzair was one of seven civilians killed when another unexploded shell went off near the site of a gunfight where three armed rebels were killed on 21 October.

Authorities shut down internet services around 127 times in 2018, taking a toll on all sectors. By one estimate, internet shutdowns cost Kashmiri subscribers around Rs 2.5 crore a day. 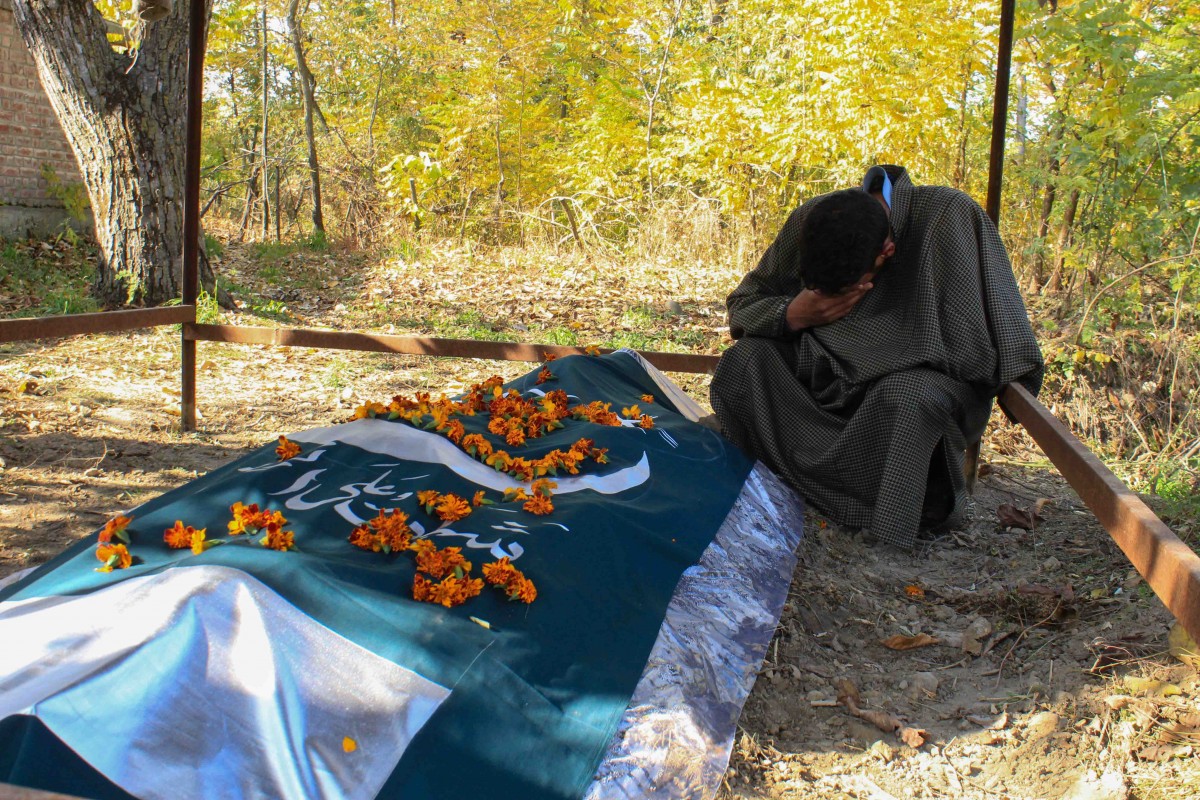 The younger brother of Aqib Gulzar, 20, mourns at his grave. Gulzar, was one of six civilians who lost their lives after an explosive shell went off at an encounter site on October 21, 2018. 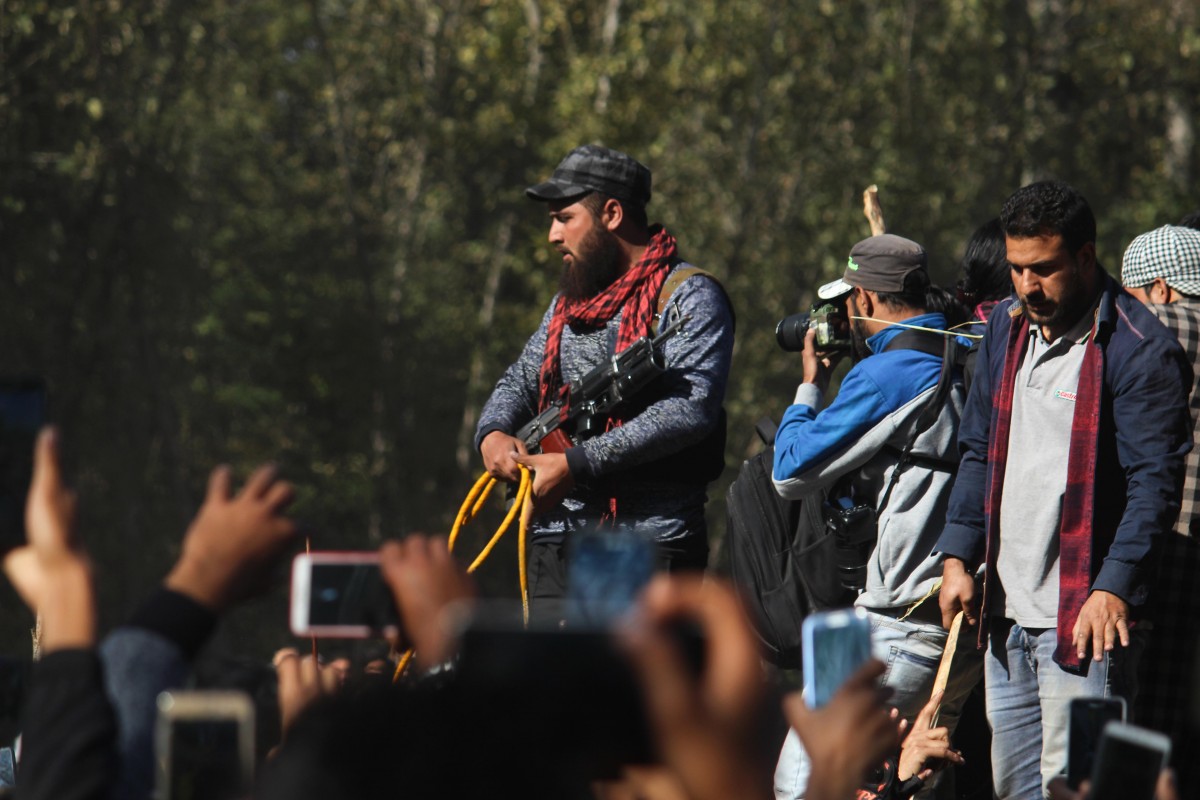 An armed fighter appears at the funeral of Subzar Sofi. Sofi was a Hizb-ul-Mujahideen rebel killed in an encounter with troops in Nowgam area of Srinagar district on October 24, 2018. More and more rebels openly attended the funerals of their comrades in 2018.

Security forces frequently blew up the houses in which militants were hiding, forcing families to live out in open. In one overnight operation on December 9, in which three militants –including two teenagers – were killed, six homes were damaged or completely destroyed. 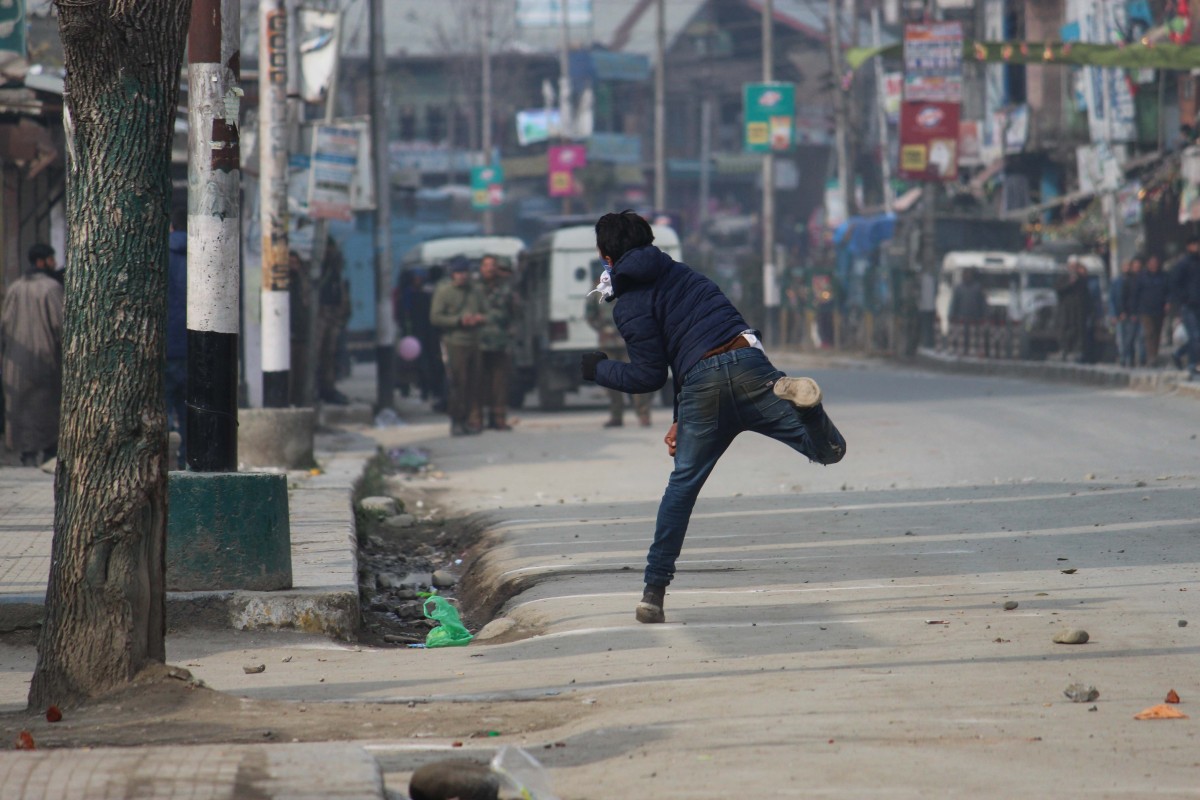 On November 17, the Hizbul Mujahideen openly challenged the administration to stop their command council meeting in Srinagar to be held on the 21st of the month. Militants later uploaded photographs on social media to show their presence, including a picture of Umar Majid Ganie of Shuch Kulgam. 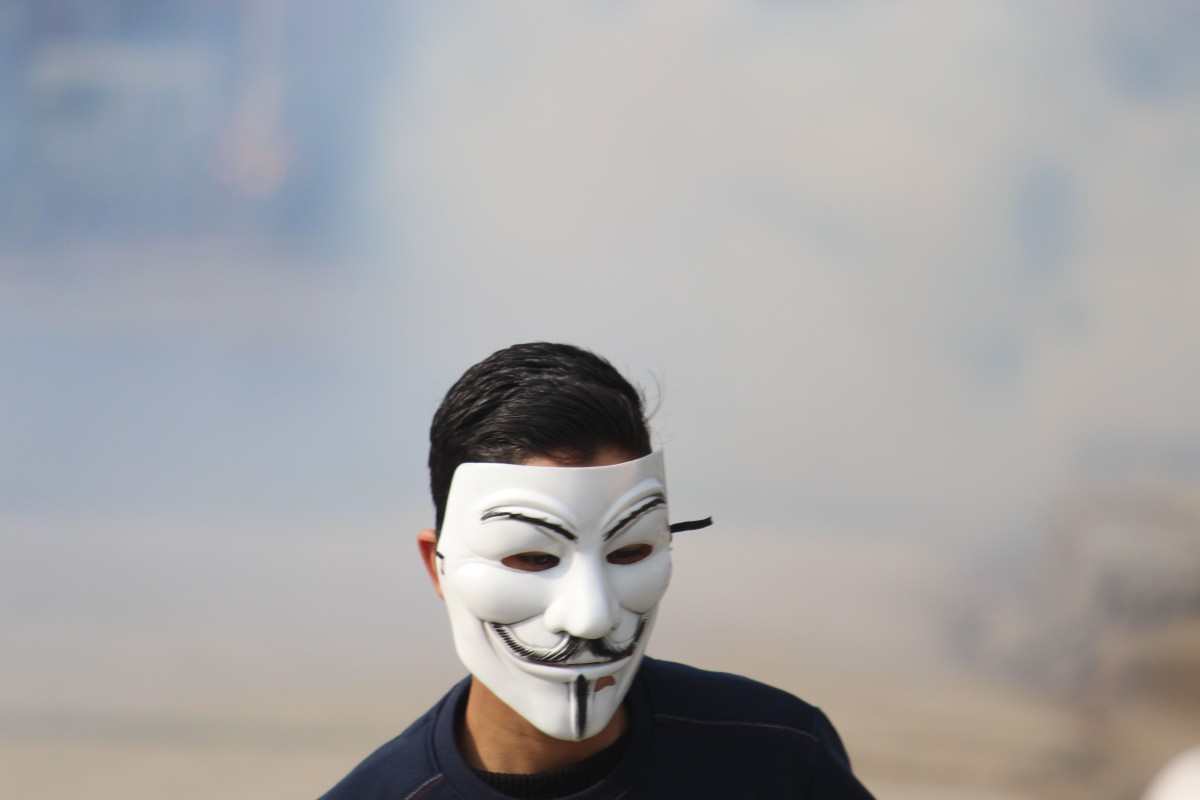 A young man wears a Guy Fawkes mask while facing the forces. Protesters liken themselves with global symbols of protest like this one from the 2005 dystopian political thriller V for Vendetta. Adifa, three-month-old daughter of Abid Nabi Lone. Abid, a postgraduate in business studies from Hyderabad was one of seven civilians killed in the crossfire in Sirnoo village of Pulwama district on December 15.

Days later, Ganie was killed along with his five associates in the same Kapran village, where three policemen had been killed earlier. 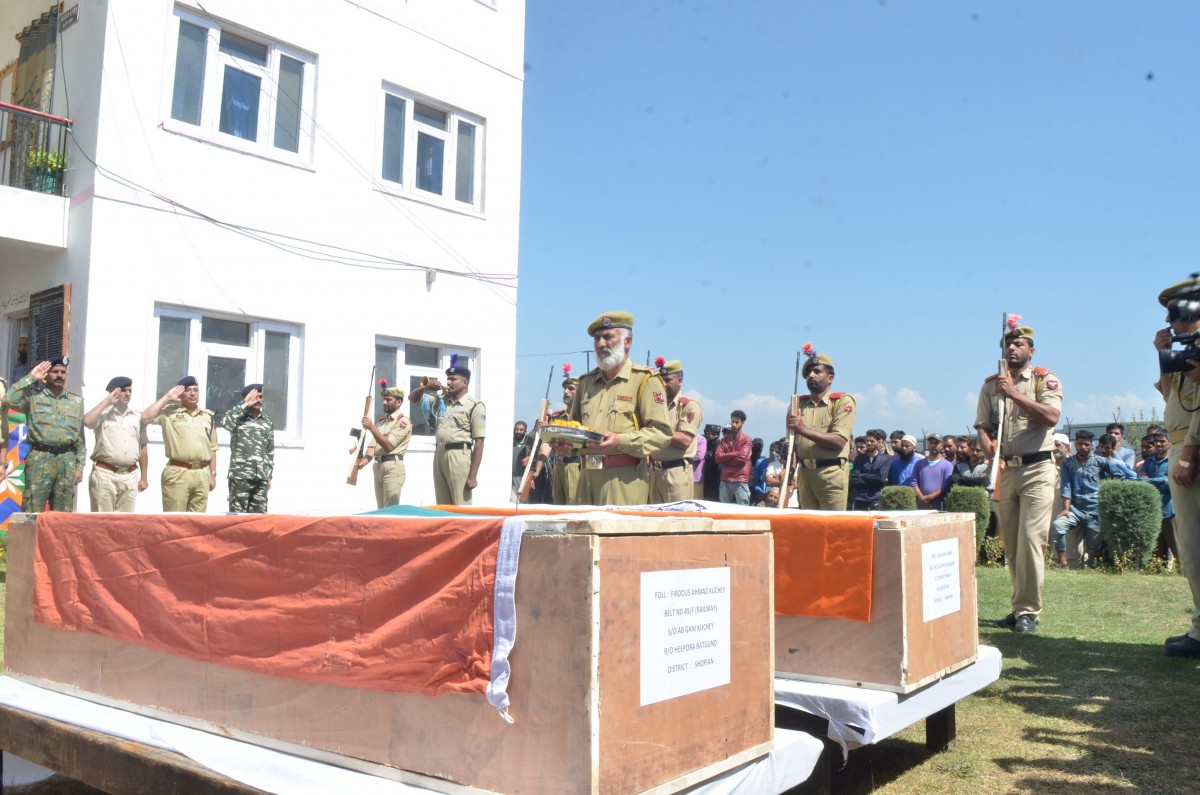 Tributes being paid to Policemen who were abducted and killed in Shopian district on September 21, 2018. According to the annual report of the Jammu and Kashmir Coalition of Civil Society, 159 Indian soldiers and policemen were killed in 2018.

Numan also fell to bullets at the same place, while trying to intrude on the gunfight, and Kashmir would get its youngest pellet victim from the same encounter – two-year-old Hiba Jan – from yet another generation drafted into the pain and grief of the Kashmir conflict.

Waseem Dar is a freelance photojournalist working in Kashmir. All photos are by Waseem.