In Photos: Graffiti That Once Marked Anti-CAA Protests in Jamia Millia Islamia

Although the university administration has recently removed the last remaining graffiti, which once evoked resistance, students vow to keep them alive through photographs.

Graffiti which came up during anti-CAA protest on Jamia Milia campus in Delhi is being erased. Photo: Ismat Ara.

New Delhi: The last remaining slogans and graffiti on the walls of MCRC (Mass Communication Research Centre) department of Jamia Millia University, which came up during protests against the Citizenship Amendment Act (CAA) and the National Register of Citizens (NRC), were removed on Thursday, December 2.

As soon as students heard about the graffiti being removed, several of them reached the campus to capture pictures of some of the remaining slogans.

Some students also said that the removal of the graffiti amounted to a whitewashing of the anti-CAA movement while others expressed a belief that it will be repainted by protesters to keep the movement alive.

The Wire spoke to several students who were active during the anti-CAA protests and compiled photographs of the graffiti, both old and new.

The last remaining graffiti from the Anti-CAA protests in Jamia Millia Islamia were removed a day back. All that remains now are photographs.

The graffiti and slogans were painted by protesters and students while the movement against the Citizenship Amendment Act (CAA) was going on outside the gate of Jamia Millia Islamia. Slogans have been painted over. Photo: Arbab Ali. Slogans have been painted over. Photo: Arbab Ali.

She added that the presence of graffiti thus far was a reminder of the anti-CAA movement being alive. “Every time they erase, it will be repainted. We will not forget and we will not let anybody forget,” she added.

According to Arbab Ali, a former history student of Jamia as well as an activist, the graffiti and slogans were painted over by the university administration in view of the upcoming visit of the NAAC (National Assessment and Accreditation Council) team to the university campus.

NAAC is funded by the University Grants Commission (UGC) and is entrusted with the assessment and accreditation of higher education institutions in the country. He told The Wire that slogans such as  “Awaaz do, hum ek hai (raise your voice, we are all one)”, “Jamia opposes CAA”, “A good fascist is a dead one” were painted over. He also claimed that when one of his friends, a student of the university tried to capture the graffiti removal in a video, he was manhandled by a Jamia official.

“He (the official) attempted to snatch his camera and threatened to get him arrested. Perhaps curbing dissent is classified as an essential parameter under NAAC guidelines,” he said, referring to the NAAC team’s visit to the university for grading. Ali recalled that even during the first lockdown in 2020 in the wake of COVID-19, the university administration had painted over the graffiti and slogans. 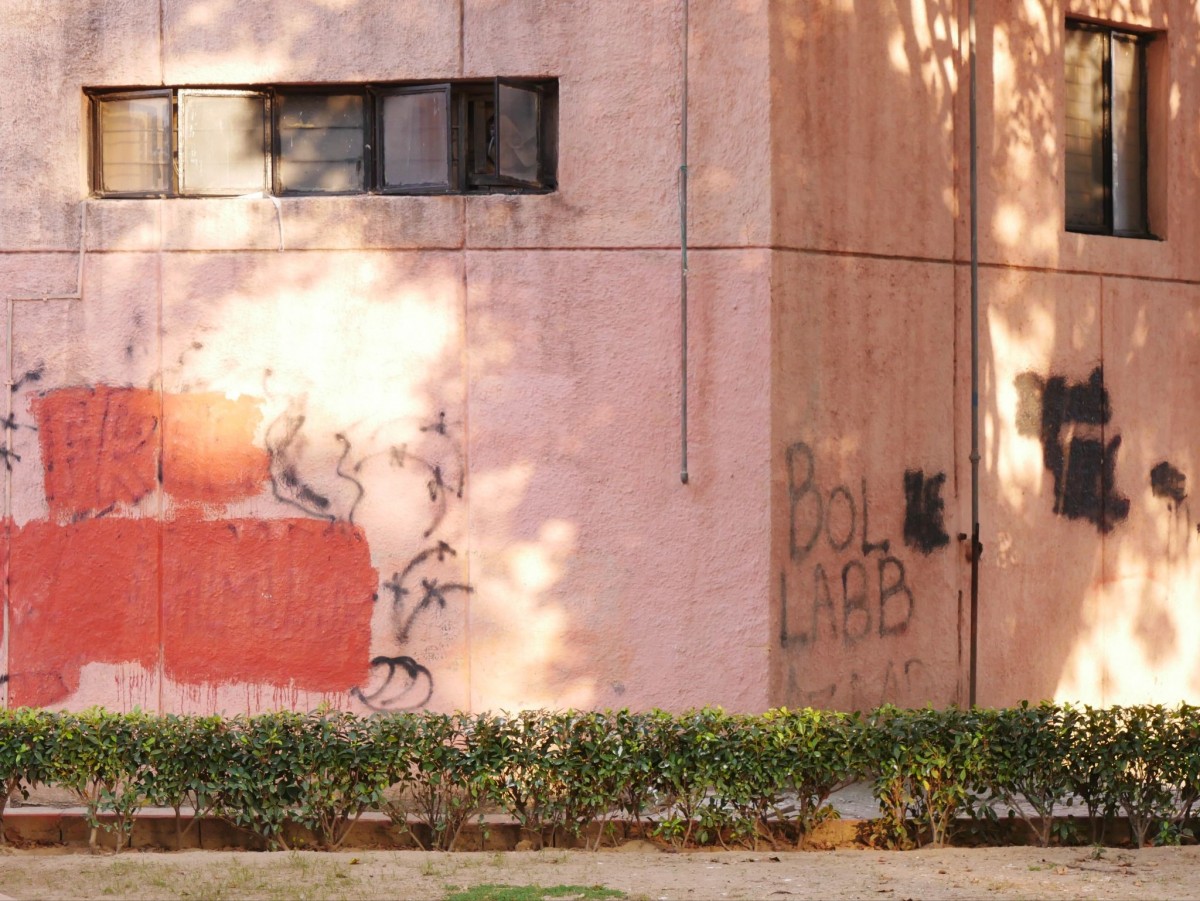 One of the walls had a “Free Kashmir” slogan. Photo: Alishan Jafri

Himanshi Saini, a student at Jamia, was at the university when the slogans were being erased. Reiterating Ali’s claims, she said that she was taking photographs along with a photojournalist of the MCRC building graffiti that was being painted.

She told The Wire, “Two faculty members stopped their cars there and started shouting at us. They told us to stop clicking photographs.” She added, “It seemed unfair at that moment when we were bashed just for standing and capturing photographs of our own university walls.”

“We were also asked to get our phones checked to delete the photos and videos. When these things happen within the university campus, it makes me question right and wrong. Do we want to prepare students for a world that’s too weak to handle criticism?” she asked. Mahak Agrawal, another university student, said that they were clicking harmless photographs of the old graffiti on the university walls being wiped off with fresh paint. 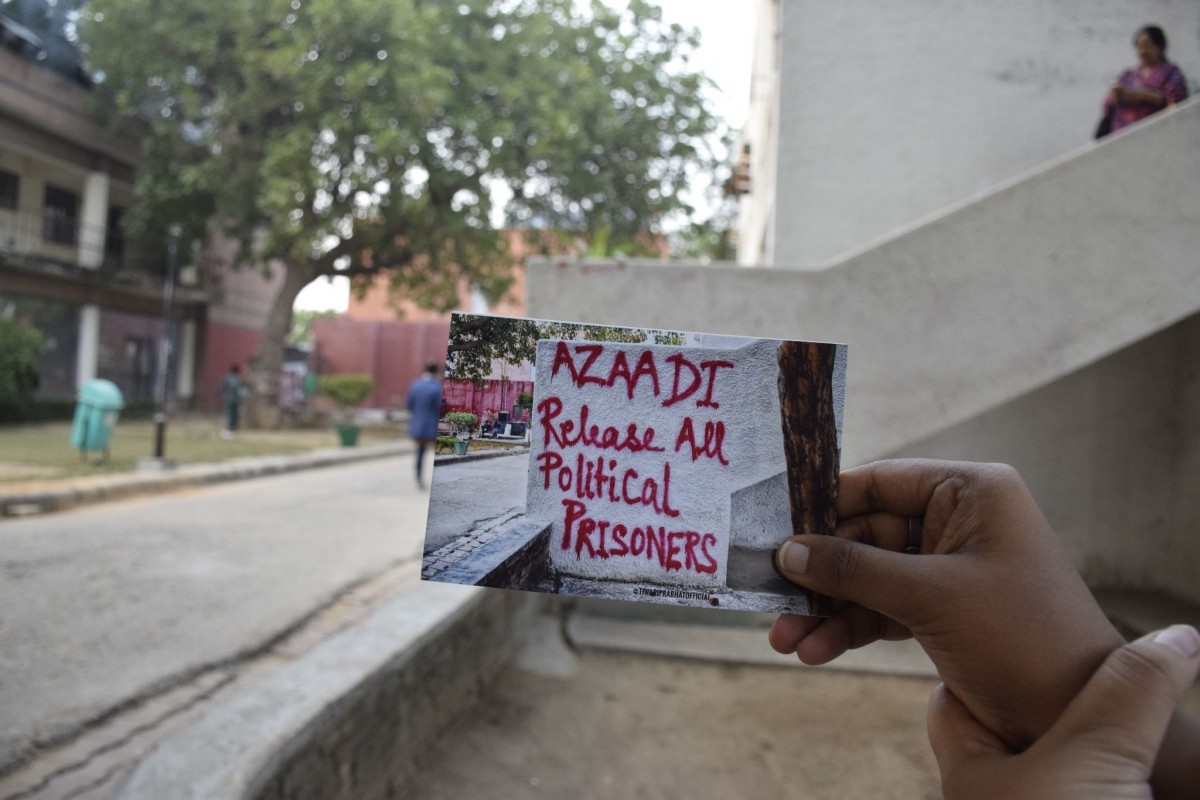 She told The Wire, “It felt wrong. We just wanted to record digital memories and freeze them through those last few photos, because that’s all we could do to keep that protest alive. The Jamia official who stopped us, however, saw it as a threat to the university’s name and reputation.” A student of the MCRC department, who wishes to remain anonymous, said, “A faculty member shouted at us and told us that he will get us arrested. But, for what? For the mere act of taking a photograph?” she asked. 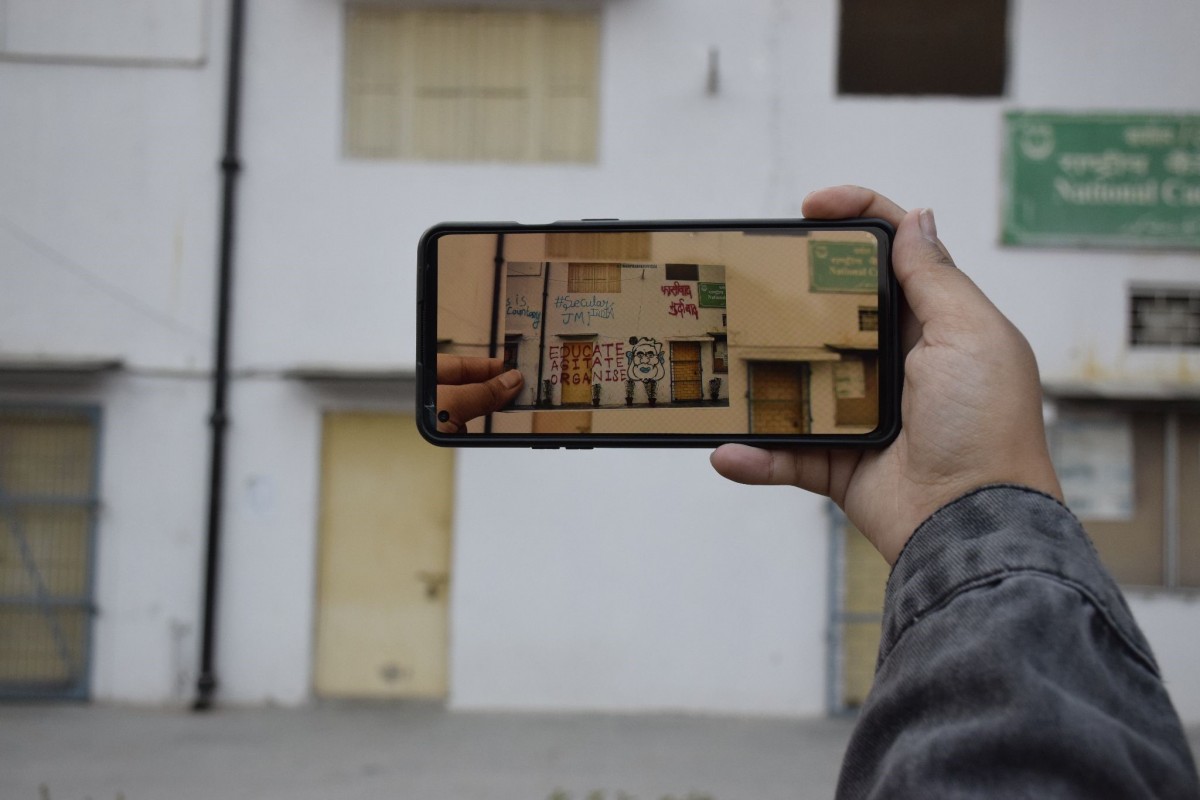 Aysha Renna N, a student activist from Jamia Millia Islamia who was actively involved in the anti-CAA protests, wrote on her social media saying, “How can they think about whitewashing our graffiti and giving a space for an advertisement like this?” She was referring to an advertisement poster that was put up recently outside the university.

Aysha Renna questioned why the students’ graffiti was painted over while the university gave space to advertisements. Photo: Aysha Renna/Instagram.

The Wire spoke to the photojournalist, who wishes to remain anonymous. He said that he was manhandled on campus by a faculty member. “This is not new for photojournalists as we often get harassed on the field, even our cameras get snatched sometimes. The takeaway from this incident is that if the graffiti was painted in front of the administration as well as the media, what is the harm in recording it?” he asked.