In Kashmir, Fear of the Pheran Returns in Full Force

Security forces have been asking those wearing the loose, traditional garment – including the reporter – to take it off as they fear it may be used to hide arms. 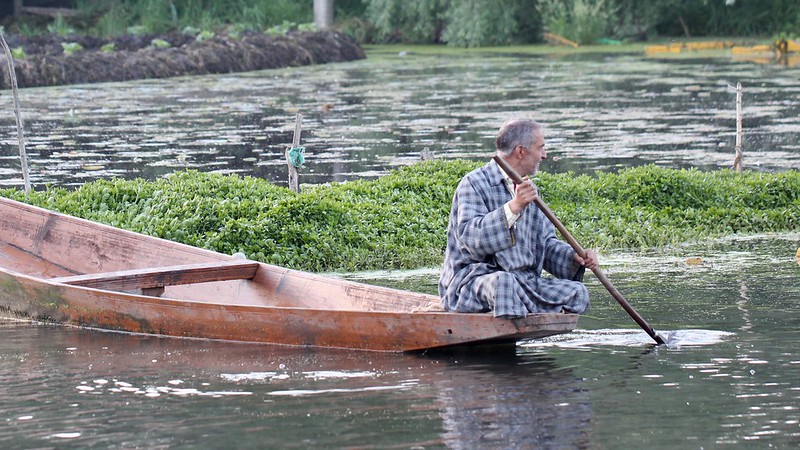 Srinagar: Civilians wearing pherans – the long robe traditionally worn in Kashmir in winter as protection against the cold – have found themselves under security forces’ scrutiny once again.

On February 19 two policemen were killed after being shot at close range by a militant in the Baghat area of uptown Srinagar, along the high-security Airport Road.

The incident was captured on CCTV cameras and a section of the video went viral on social media. In it, a militant was seen pulling out an assault rifle hidden inside his pheran. He then fired bullets at the two police constables, Sohail Ahmed and Mohammad Yousuf.

This was the second attack in a Srinagar eatery in the last two weeks. On February 17, suspected militants shot at and injured the son of a Krishna Dhaba owner in Durganag area of the city.

Since the video of the pheran-clad attacker has surfaced, security forces have conducted multiple crackdowns across Kashmir valley with civilians mass frisked and their belongings checked.

Many told The Wire that they have been asked to carry their pherans on their shoulders (instead of keeping them on) or were ordered to remove and discard them completely.

As Srinagar and other districts of Kashmir continue to witness enhanced security and checks, armoured vehicles on main roads are a common sight. In most places, police and paramilitary troopers are seen frisking people, checking vehicles and identity cards. 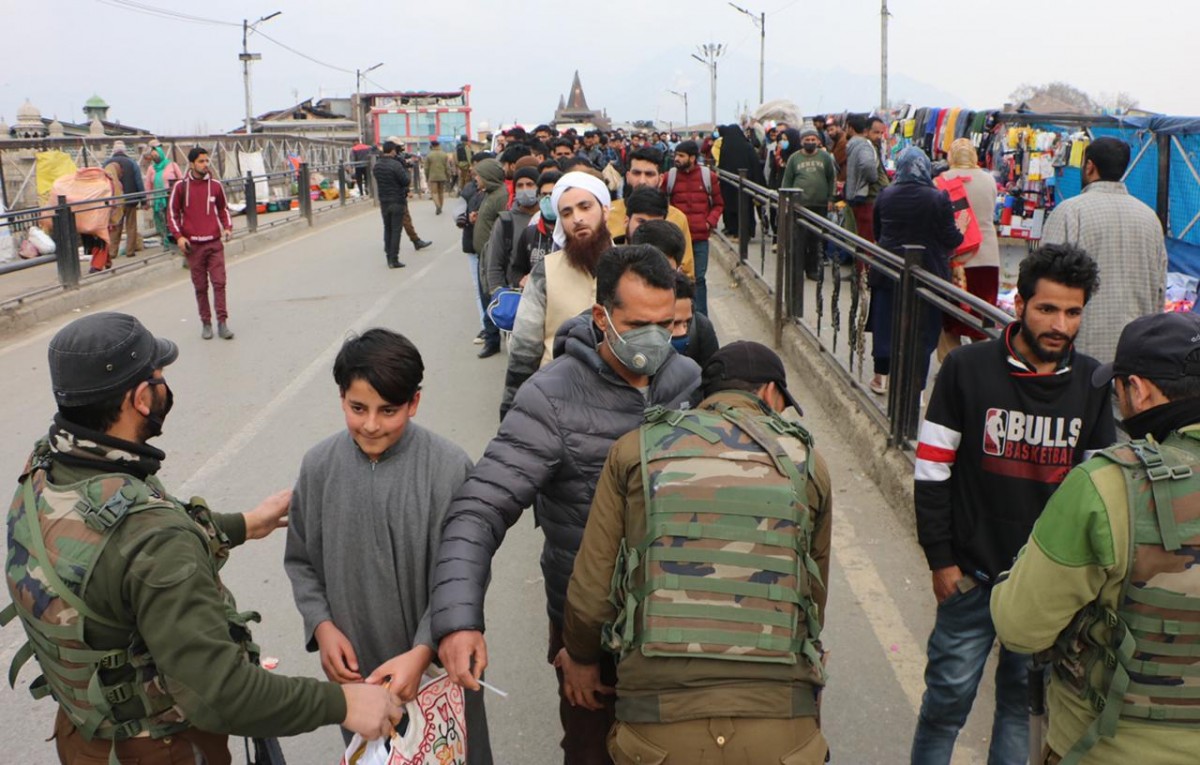 Men stand in line for checking and frisking by security forces in Srinagar on Monday, February 22. Photo: Kaisar Andrabi

On Monday, forces carried out a sudden crackdown in the commercial hub of Srinagar’s Amira Kadal area in what seemed to be a reprise of the 1990s.

A number of civilians were lined up for on-spot frisking, as reported by Kaisar Andrabi for The Wire. Their bags and other belongings were searched by police and CRPF troopers. Those in pherans faced more heat with people mostly elderly recalled the era of 1990s when military crackdowns was a common exercise in the valley.

On Monday morning, 34-year-old Mir Shahnawaz, a businessman had travelled to north Kashmir with his friend for some work. Mir and his friend termed the journey horrifying after both witnessed massive security checks on the Srinagar-Baramulla highway.

“We were heading towards Sopore but we saw vehicles carrying pheran-clad commuters being stopped. At various places, even pedestrians wearing pherans were asked to walk with their hands up,” said Mir.

‘Fernophobia’! People on the streets in Srinagar being forced to remove and pack their traditional winter outfits of ‘Feran’. For the first time since 1989. pic.twitter.com/mHi3hm0mUe

On Tuesday, security forces laid a cordon in the busy bus stand area of the main town of Tral in Pulwama district, some 40 kilometres from Srinagar city. During the 40-minute-long operation, forces asked people to stand in queues and frisked them.

A local shopkeeper, Hussian Ahmad, told The Wire that everyone present in bus stand Tral was frisked and vehicles were thoroughly searched. “People wearing pherans faced more pressure during the crackdown.”

Magray Mansoor, a social activist from Shopian, told The Wire that this could be the very first time that people wearing certain clothes were stopped from entering an official building. 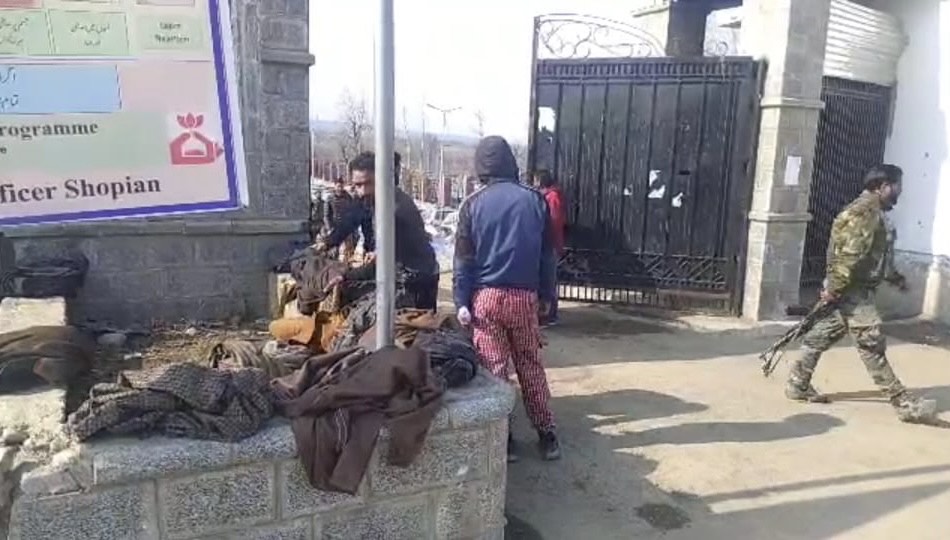 People take off their pherans before going into a government office in Shopian. Photo: By arrangement.

“Wearing the pheran is part of our culture and asking people to remove it is an attack on our culture. Security guards on duty told us that this is part of a security protocol and the orders were received from higher ups,” said Magray.

Locals in south Kashmir said they had stopped venturing out during evenings. “On Monday evening, my friend and I were stopped by security personnel while we were out on a walk. We heard security personnel shout and tell us to carry the pherans on our shoulders. It is cold and carrying pherans like this serves no purpose. We’ve decided to abandon our evening walk,” a teenager, who wished to remain anonymous, said.

This reporter, wearing a pheran as well, was also stopped at two locations after sundown and was also ordered to carry the pheran on the shoulder.

Police officials admitted to the escalation of frisking and searches in the valley. “Due to security reasons we are conducting searches in different parts of the valley. The search operations have intensified since the Bhagat attack,” said a police officer.

The Wire also contacted a top CRPF officer and asked why pheran-clad people are facing the heat from security forces. “These security measures are implemented by CRPF only when the local police headed by the superintendent of police issues directions,” replied the officer.

On Thursday, the inspector general of the CRPF (Srinagar sector) Charu Sinha also clarified that the security forces are conducting frisking operations but there is no need to remove the pheran. “Security is tightened but insulting anybody is not the intention,” she said, adding there has been no direction from authorities to officers on the ground to force civilians to remove their pheran during the frisking.

The pheran has a unique position and is political in its own way. From Prime Ministers Indira Gandhi and Rajiv Gandhi to Atal Bihari Vajpayee and Narendra Modi, nearly every dignitary visiting Kashmir has worn the pheran. 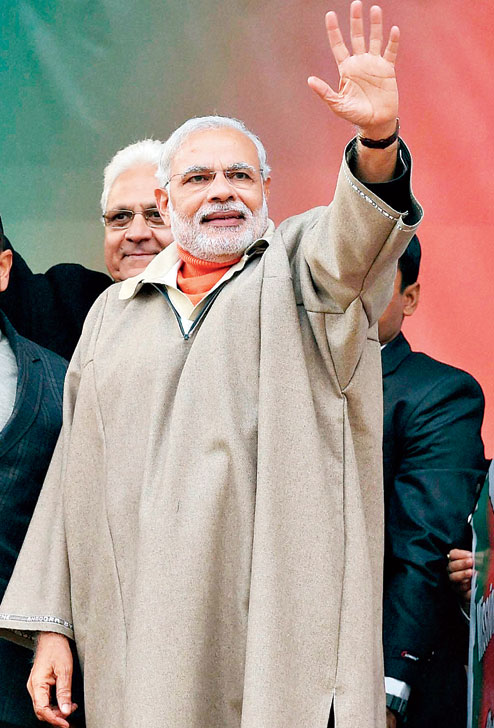 Pherans, mostly woollen, are worn both by men and women during winters. Women’s pherans are more richly embroidered.

Historically, the pheran was brought to the Valley from Central Asia where it was used as a cloak. In Persian, it was called the ‘pairahan‘. In his book The Valley of Kashmir, Sir Walter Lawrence, the Settlement Commissioner for Jammu and Kashmir during 1889-94, puts the onus of promoting this garment on Mughal ruler Akbar.

In the last 30-odd years of armed conflict in the valley, the pheran has often been looked at with suspicion. This owes presumably to its loose fitting, which affords the wearer an opportunity to carry a Kangri (the traditional fire-pot) inside.

Security forces in the valley suspect that if a pheran can carry a fire-pot, it can also hide firearms.

In the meantime, a Bajrang Dal leader Rakesh Bajrangi has also called for a ban on the pheran. On February 22, in a video that was viral on social media, he said, “It is so loose that you cannot judge what a person is carrying. We demand an immediate ban on it.”

The claim that militants carry firearms in their clothing was also prevalent in the 1990s. 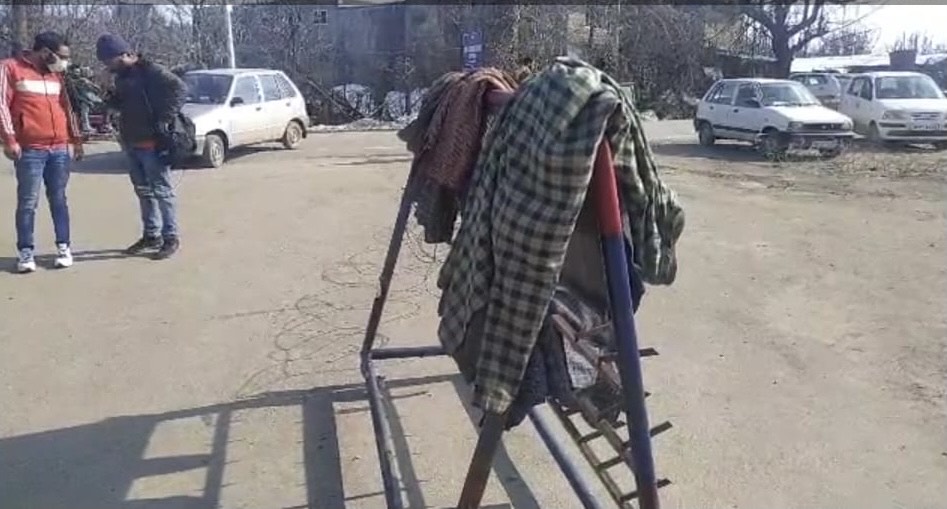 Pherans slung over a barricade in front of a government office in Shopian. Photo: By arrangement.

Earlier in 2014, the Army had asked Kashmiri journalists to “refrain from wearing the pheran at events held by the Srinagar-based Army 1 Corps.” Following an outcry from the media fraternity, the Army subsequently revoked the order, terming the guidelines ‘inadvertent.’

In 2018 Jammu and Kashmir government headed by Governor Satya Pal Malik, had for a while banned the pheran at some of its offices. After receiving sharp criticism, the order was withdrawn.

Even the Directorate of School Education, Kashmir, had once banned the pheran at zonal offices in the Valley. In Srinagar’s Civil Secretariat, the police had once put pherans in the ‘barred items’ category.

Kashmiris, meanwhile, have been vocal in defence of the traditional pheran. Hashtags like #dontbanourpheran #pheranouridentity and #pheranlove have dominated Twitter trends.