'If We Go Back, We'll Die': Second Attempt at Rohingya Repatriation Fails

Every single refugee who had been listed to return to Myanmar asked for a guarantee of full citizenship first. 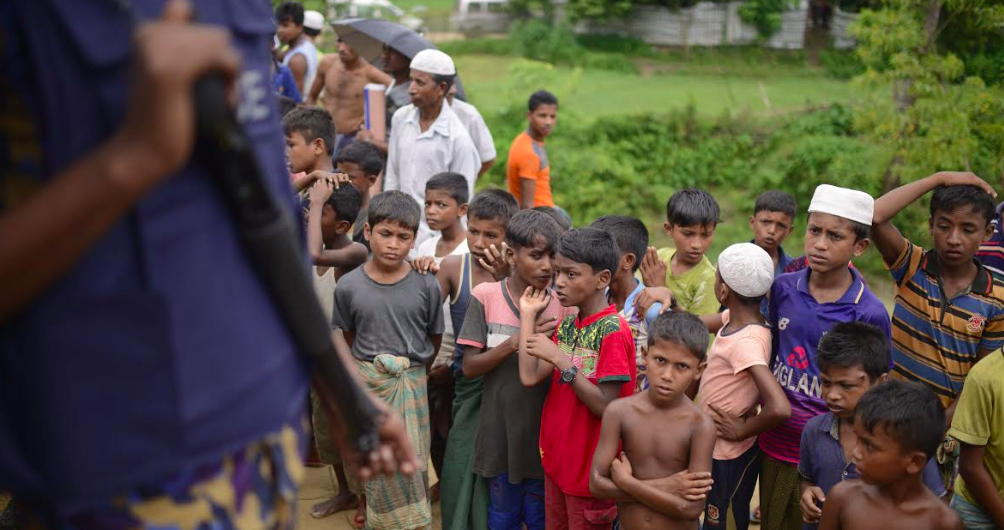 He and his team of officials hopped around from camp to camp in the southern part of the country, where nearly a million Muslim Rohingya refugees have taken shelter from neighbouring Myanmar. Kalam’s efforts yielded little.

What the officials failed in was to convince Rohingya refugees — ones listed for repatriation — to go back to their homeland in Rakhine state of Myanmar.

Kalam first went to camp number 26, which is known as the “Shalbagan camp” and is the temporary home to most of the listed Rohingya refugees. There, he faced refugees who were not only reluctant but feared for their lives.

“If we go back there, we will die,” said one Ambia while cradling her one-year-old girl. “They have killed our families. We don’t know what lies there,” she added. 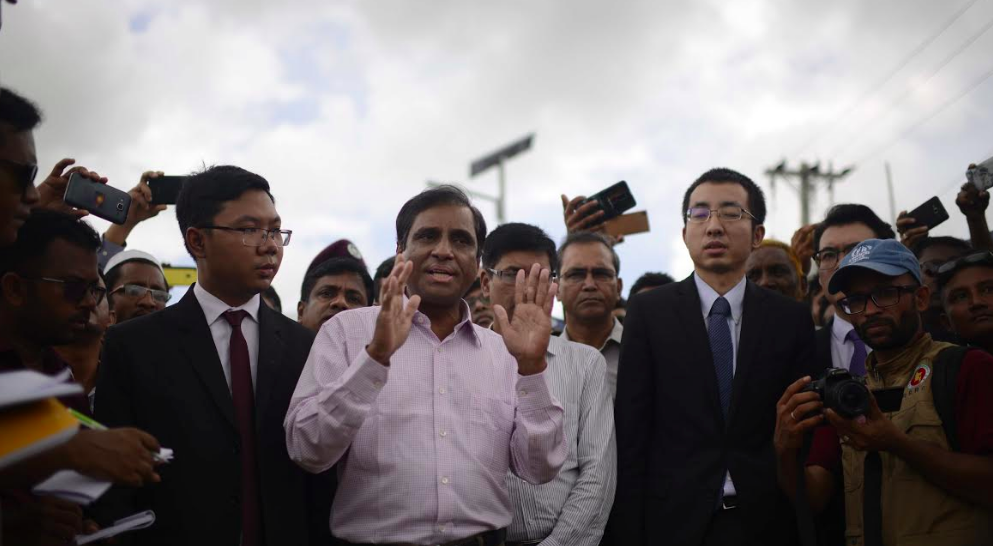 Kalam then went to camp 24 which is known as the Leda camp. Later, he visited the Kutupalong camp — the largest Rohingya refugee camp. The situation was the same everywhere. Not a single refugee wanted to return to Myanmar.

Sultan Ali, a Rohingya refugee living in the Leda camp told this correspondent that he “would rather commit suicide than to go back to Myanmar.”

Ali and some of his camp neighbours have five demands which they have written out on a piece of paper. The first one is the right to be called “Rohingya.”

“They (the Myanmar authorities) don’t even call us by our identity. How can we go back there?” he asked.

Before repatriation, said Ali and his associates, they wished to be assured of four things. They are: citizenship, safety and security after their return, the return of their homes and land and justice for the crimes committed against them. 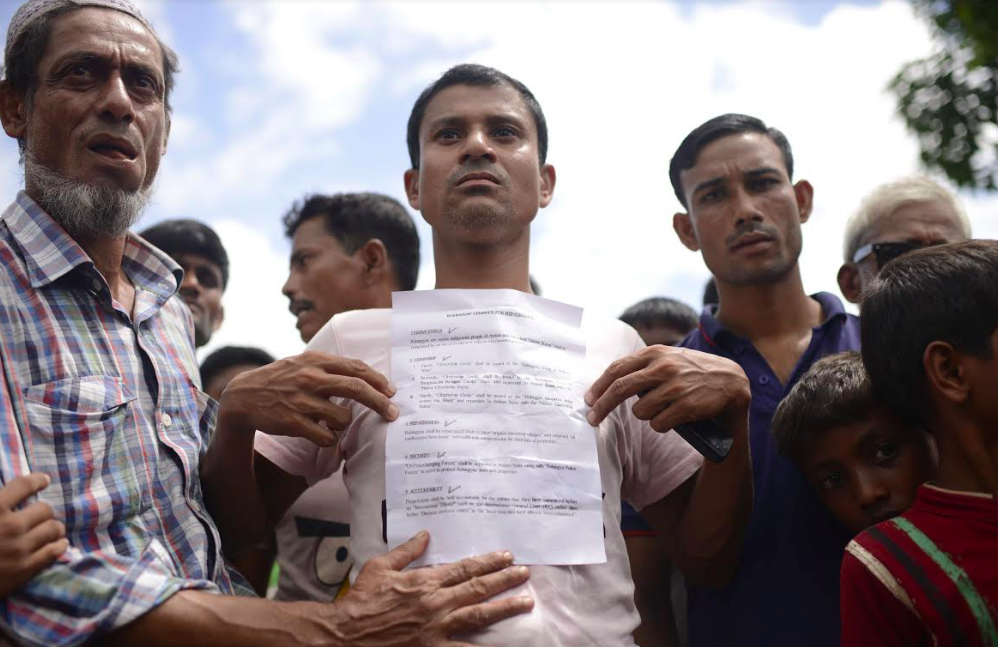 Sultan Ali and others in the Leda camp hold up a piece of paper with their demands written on it. Photo: Mahmud Hossain Opu

Meanwhile, with Bangladeshi authorities proving unrelenting in their efforts to push Rohingya refugees to travel to the other side of the border, news of Rohingya fleeing from one camp to the other out of fear of being repatriated has also surfaced.

The first chapter of the official repatriation project was supposed to start on November 15 last year through the Ghumdhum border between Bangladesh and Myanmar. However, Rohingya Muslim refugees who have been living in crowded camps did not express any wish of going back.

“We can’t and didn’t force them to go back,” said Commissioner Kalam after Thursday’s exercise. “Repatriation to their own home country was completely up to the refugees and they clearly weren’t convinced enough,” he said.

No going back without citizenship

The Ministry of Foreign Affairs of Bangladesh had forwarded a list of more than 22,000 names to Myanmar for verification, out of which Naypyidaw cleared 3,450 individuals for “return”. 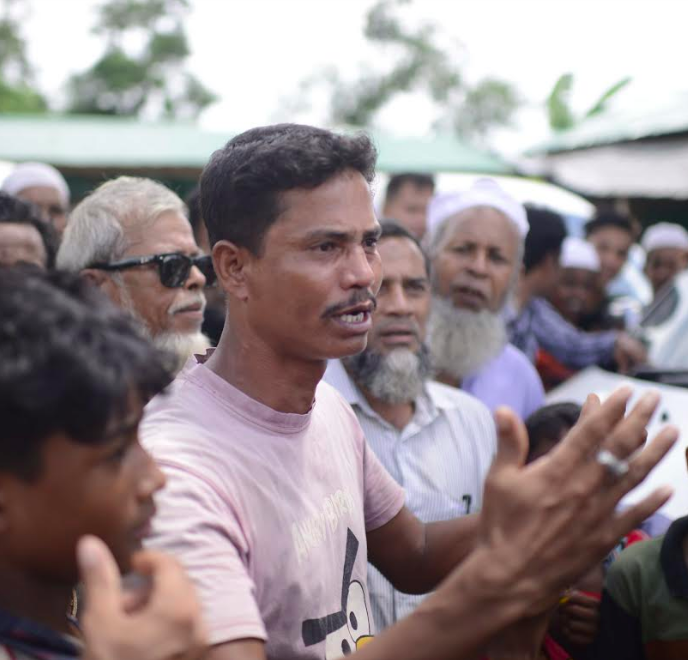 On August 20, Bangladeshi foreign minister A.K. Abdul Momen said both Dhaka and Naypyidaw were “fully ready” to resume the repatriation of Rohingyas to their homeland but some Rohingya leaders and NGOs were reportedly discouraging them from returning.

“We’ve heard some Rohingya leaders have emerged there. They don’t want the return of any Rohingya (to their homeland). They’re trying to stop returnees. Some INGOs and NGOs are instigating them (Rohingyas),” he told a small group of reporters at his office.

Talking with this correspondent, Rohingya leader Nur Islam however said that they are not being instigated by any one. “Without being granted full citizenship by Myanmar, they are not feeling safe to return,” he said.

Echoing Nur, Rohingya leader M.D. Islam said in a statement: “We need a real guarantee of citizenship, security and promise or original homelands. So we must talk with the Myanmar government about this before repatriation.”

Another Rohingya leader Baron Roshid said, “Fighting between Arakan Army and Myanmar Army is still on. So it is clearly not safe for us to be repatriated now.”

Under pressure from China, Bangladesh and Myanmar officials met in Dhaka on October 30 and 31 last year, the third meeting of a joint working group, to formulate a bilateral repatriation agreement signed in November 2017.

Following the meeting, representatives announced that they had a “very concrete plan” to begin repatriations in November 15, with the first round to include 2,260 Rohingya from 485 families.

Commissioner Kalam told this correspondent that they are conducting the whole process of repatriation “in a transparent manner.”

“We wanted them to make an informed decision. We didn’t segregate them (listed Rohingya refugees) from other refugees. We also want the repatriation to happen in clear daylight, not in the middle of night,” he added.

Kalam said that since they discovered that no refugee wanted to go back voluntarily, they didn’t ask anyone to leave the camp. “We have kept all arrangements ready for repatriation up until 4 pm on Thursday. As you can see, seeing that we have no one to repatriate, we are closing our day’s operation,” Kalam said while sitting at the RRRC office inside the Kutupalong camp. 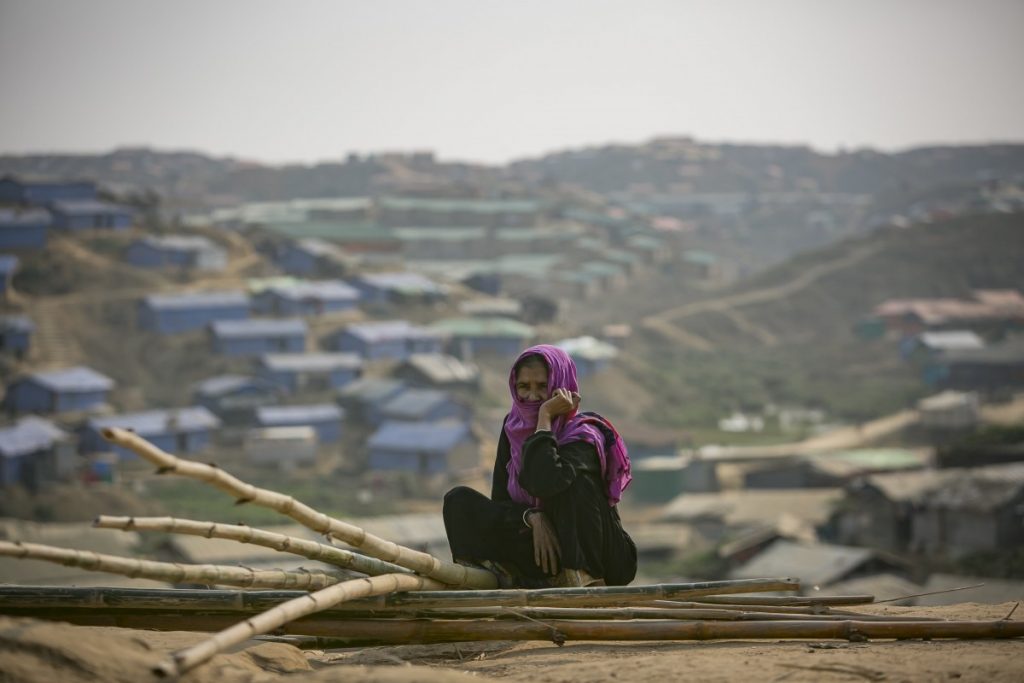 When asked about the next step, Kalam said that they would keep asking the listed families whether they want to go back or not.

“The UNHCR (United Nations High Commissioner for Refugees) has been conducting interviews of the Rohingya refugees listed for repatriation and the responses they are receiving are being recorded,” he said.

UNHCR in its official statement released late on Thursday said, “Over the past few days, together with Bangladeshi officials, UNHCR has visited refugee families in their shelters to establish whether they wish to return to Myanmar. So far, none of those interviewed have indicated a willingness to repatriate at this time.”

The UN body said any repatriation of refugees must be “voluntary, safe and dignified.” It also said “respect for these principles will also have the practical effect of helping to ensure that return is sustainable.”

“Many stated that they do hope to go home to Myanmar as soon as conditions allow and that assurances regarding their citizenship status, freedom of movement, and security in Myanmar could be provided,” the UNHCR said in its statement.