Protesters said they were detained on Saturday night despite holding a peaceful demonstration. 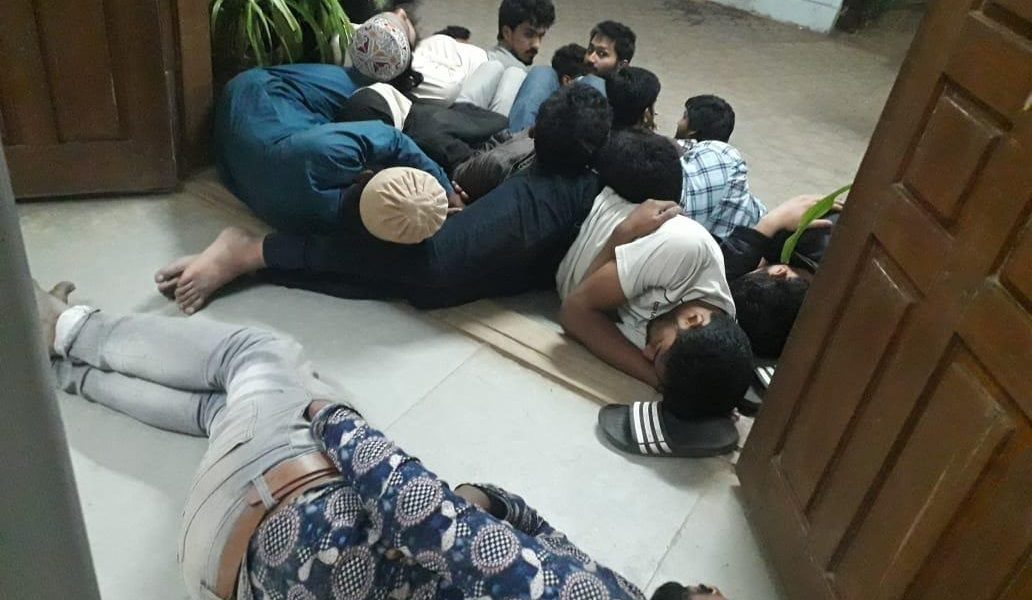 New Delhi: Protesters detained by the Hyderabad police on Saturday night during a flash demonstration against the Citizenship (Amendment) Act (CAA) said that the police ill-treated, forcing them to spend the night in the cold.

According to reports, 10 women, 18 men – including two minors and a journalist, were detained near Mallepally area of the city by the police. Those arrested, including the women, were kept at Central Crime Station (CCS). They were made to spend the night in the cold on the floor at the entrance of the building.

On Twitter, Majlis Bachao Tehreek (MBT) spokesperson Amjed Ullah Khan posted photos of the youth, sitting on the stairs leading up to the building. He criticised the Hyderabad police for their ‘inhumane treatment’ of the protesters.

The protesters were released on Sunday, after being kept in detention for 15 hours. Media reports said that they were booked for rioting, wrongful restraint, assault or criminal force to deter public servant from discharge of his duty and disobedience to order promulgated by public servant.

A protester detained by the police, Shiba Minai, told news agency IANS that the police beat up a young boy who has been present at many protests against the CAA. She said the men who were detained were forced to spend the night out in the cold. “They were without food for the whole night. There were mosquitoes all around. They were treated badly with policemen repeatedly pushing them and shouting at them,” she alleged.

Minai alleged the police were trying to suppress the protests through this high-handedness. “They are denying permission for protests and when we are conducting peaceful flash protests they are resorting to high-handedness,” she said.

Activist Khalida Parveen said the protesters were arrested despite their intention to hold a peaceful protest. “Except raising slogans, we did nothing but the police still detained us,” she said.

Journalist Mubashiruddin Khurram, who works with Urdu newspaper The Siasat Daily, was also detained by the police. He told The News Minute that he was detained though he informed the police that he was present at the spot to cover the protest.

After 15 hours of illegal detention back to work with new enthusiasm. Thanks to all my dear colleagues & friends who tried their best to make it possible with in 24 hours. Spl thanks to @journalistamer @zaheer_siasat @syedmohammedd @NaseerGiyas & @Bilaljourno pic.twitter.com/KMvpFgNUk1

Khurram said that he was kept at the office of West Zone Task Force and was questioned by four teams about why he was tweeting from protest venues. “One of them [police officer] was saying why do you want to protest against CAA. What is wrong in NRC and NPR. You people (Muslims) have 50 countries. When I raised an objection he changed the topic,” the journalist said.

Apart from questioning him for ‘being active on Twitter’, the police also asked Khurram why he was seen with Bhim Army chief Chandra Shekhar Aazad during the latter’s visit to Hyderabad. Aazad was also detained by the Hyderabad police after permission was denied to hold a protest against CAA.

Though Telangana chief minister K. Chandrasekhar Rao has opposed the amended citizenship law, Hyderabad police have been reluctant to give permission for citizens’ protests against CAA.