In its second report, a group of eminent citizens also speaks about the pandemic, changes in land laws hitting people's economic interests and the costs of the 18-month 4G ban. 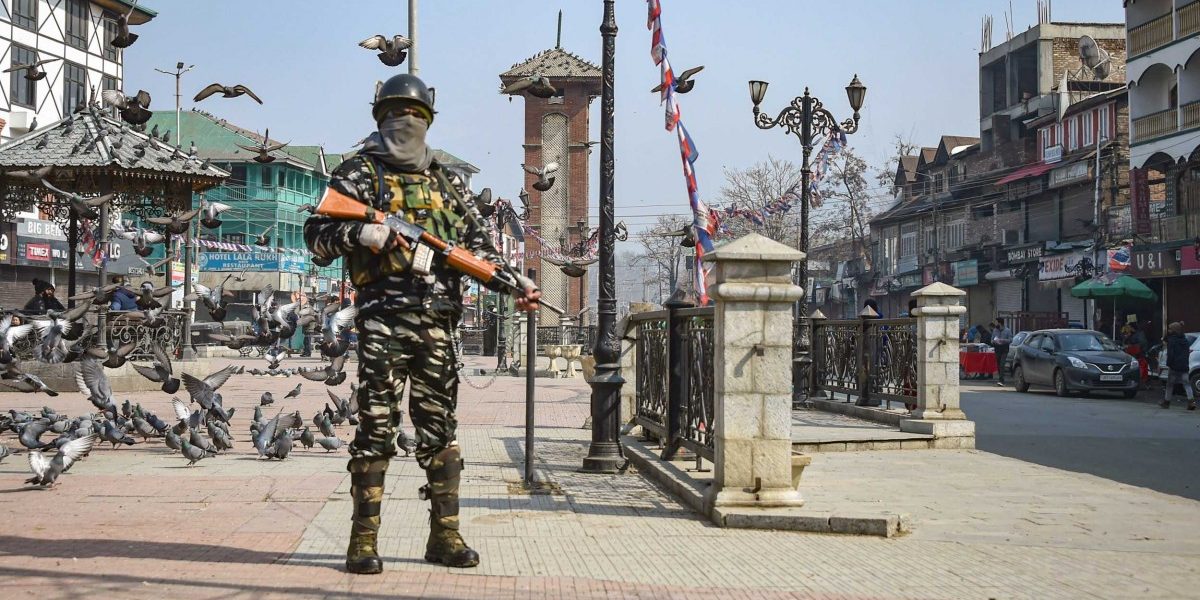 A security person stands guard near Lal Chowk during a strike called by Jammu and Kashmir Liberation Front (JKLF) to mark the 37th death anniversary of JKLF founder Mohammad Maqbool Bhat, who was hanged in New Delhi's Tihar Jail on this day in 1984, in Srinagar, Thursday, Feb. 11, 2021. Photo: PTI/S. Irfan

New Delhi: The Forum for Human Rights in Jammu and Kashmir has, in its latest report, highlighted how counter-insurgency concerns continue to be prioritised over public, civilian and human security, leading to the vitiation of protections such as habeas corpus, prevention of illegal detention and strict restrictions on arrest and detention of children.

In its second report, the Forum, which comprises an informal group of concerned citizens, has noted that denials of the right to bail and fair and speedy trial remain, coupled with misuse of draconian legislation, such as the Public Safety Act (PSA) and the Unlawful Activities Prevention Act (UAPA), to stifle dissent.

It has also said that partly due to these actions, “rates of militant recruitment, which had fallen, have started to rise again, rendering 2020 as the year with the second-highest militant recruitment in a decade.” Consequently, it added, civilian fatalities in cross-border shelling and armed encounters between militants and security forces continue; arrests and detentions of political leaders continue, with the latest victim being PDP youth president Waheed ur Rehman Para.

Podcast: There Was a Human Cost to the Internet Shutdown in Kashmir

The Forum has also stated in the report, that covers the period from August 2020 to January 2021, that recent pellet firing, lathi-charge and tear-gassing of Muharram processions was entirely avoidable. “Adequate planning by the administration in cooperation with Shia leaders could have ensured sanitary measures were taken without banning the processions. The arrest of over 50 participants in the processions was, by any measure, excessive.”

Co-chaired by former Supreme Court judge Justice Madan B. Lokur and former J&K interlocutor Radha Kumar, the Forum also dwelt deep into the issue of restrictions on broadband services in the state. “The 18-month ban on 4G connectivity continued to impact public health, causing trauma and stress amongst the people of Jammu and Kashmir and violating the rights to health and medical care under the Indian, and Jammu and Kashmir, constitutions,” it said.

Stating that rights of children to a trauma-free environment continue to be arbitrarily ignored, it added that during the period, assault and mistreatment of media professionals has continued, while media houses have faced economic, administrative and logistical problems. Furthermore, it added that changes in land rights have impacted ever-widening groups of people. “Recent contraventions of the national Forest Rights Act of 2006, allowed for the demolition of hundreds of Gujjar and Bakerwal homes with no alternative housing provided.”

The group also referred to the repeal of the former state’s Roshni Act, which it said has been applied with retrospective effect and has lumped lawful owners in with land-expropriators. “Local and regional industries continue to suffer large losses in every sector. The tourism industry continues to languish and the iconic houseboat industry is on the verge of collapse,” the Forum said.

In the second report, the Forum regretted that the Ministry of Home Affairs and the Jammu and Kashmir administration did not respond to its August 2020 Report and recommendations or to the letters sent to Lieutenant-Governor G.C. Murmu and his successor, Lieutenant-Governor Manoj Sinha (including on the Shopian extra-judicial killings of July 2020).

In its earlier report, the Forum had highlighted how during the 11 months of lockdown in Jammu and Kashmir, not only were there “across-the-board violation of human rights”, it also led to the “denial of the right to bail and fair and speedy trial, coupled with misuse of draconian legislation, such as the Public Safety Act (PSA) and the Unlawful Activities Prevention Act (UAPA), to stifle dissent”.

Moreover, it had stated that the period from August 2019 to July 2020 saw “frequent closures, harassment at barricades and checkpoints, and restrictions on mobile telephony and internet connectivity,” which enormously impacted public health, and caused trauma and stress amongst the people.

Since then, the latest report said, “though 12,000 of the 38,000 additional troops that were flown in to enforce the lockdown have been withdrawn, arbitrary detentions continue, public assembly is still prohibited under Section 144 of the Code of Criminal Procedure 1973 (CrPC), and hundreds, including minors and several elected legislators of Jammu and Kashmir, remain under preventive detention.” The Jammu and Kashmir administration appears to have added a new category of ‘protective’ detention in the recently concluded district development polls, it added.

On the impact of the pandemic, it said, the former state’s industries still reel under the dual impact of the lockdown, pushing the majority into loan defaults or even closure. As of January 2021, unemployment in Jammu and Kashmir was at 16.6 percent, almost twice that in the rest of India.

Referring to two new developments – elections for District Development Councils (DDC) in December 2020 and further changes to land laws – the Forum said these combined violation of human rights with further erosion of political and economic rights. “Moreover, implementation of the much-criticised new media policy led to the dis-empanelment of about 20 media outlets, including the newspaper, Rising Kashmir, whose editor Shujaat Bukhari was assassinated by terrorists in 2018,” it said.

In light of the present situation, the Forum has also made several recommendations. It has among other things called for release of all remaining political detainees who were taken into preventive detention on or after August 4, 2019; repeal of the PSA and any other preventive detention legislation; removal of all restrictions on freedom of representation and expression; strict implementation of juvenile protection legislation; and withdrawal of unsubstantiated charges under the PSA/UAPA against political leaders, journalists and activists.

Further, the Forum has asked for the initiation of criminal and civil actions against personnel of police, armed forces and paramilitary forces found guilty of violation of human rights, especially with regard to recent instances of attacks on journalists.

It has also urged ensuring that the Army’s additional directorate for human rights was given full freedom in investigating alleged human rights abuses, including the recent Hokersar deaths.