How to Mine a Valley and Alienate Communities

In Jharkhand's North Karanpura valley, a mining company is forcing residents to sign contracts they do not understand, and threatening to evict them from their homes. 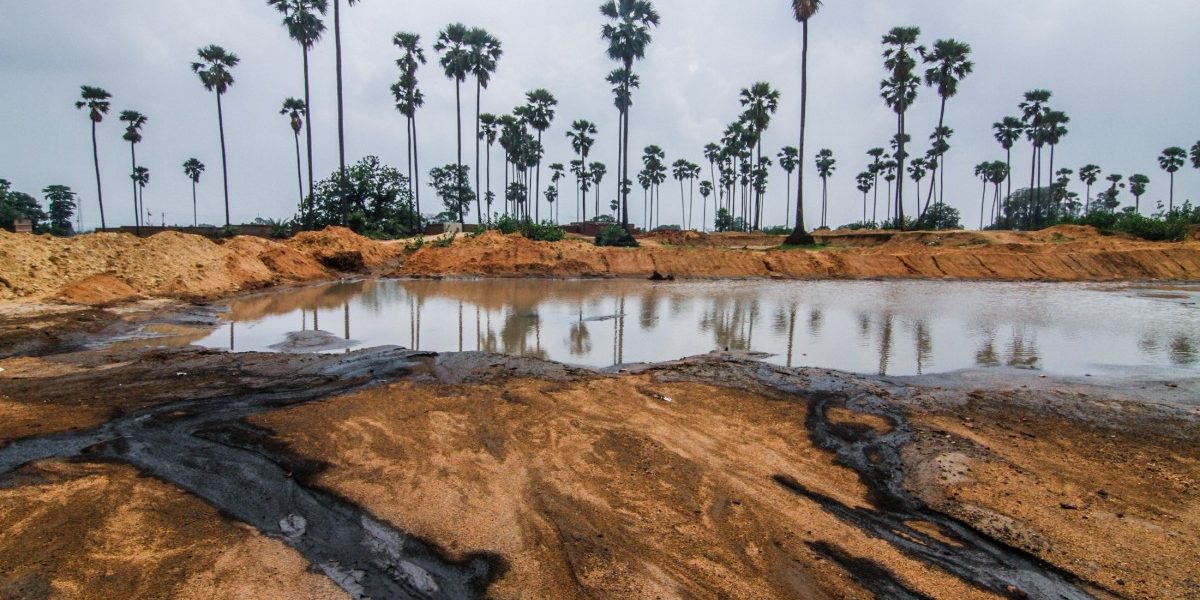 The cliched affliction of coal mining: coal dust has already started spreading across the roads and the valley.

“This paragraph is very important to our company. You should read it carefully and ask us any questions you wish. When you have signed this contract, you are committed to secrecy.”

This is an excerpt from point ten in a fixed-term employment contract written in English, drawn up with a villager in Itij in North Karanpura valley in Jharkhand. Never mind that no-one in the village reads or understands English.

The contract between Thriveni-Sainik and villagers promises a job in the company in exchange for land. According to its website, “Thriveni Sainik Mining Private Limited is a joint venture of Thriveni Earthmovers Private Limited (a world class mining company) and Sainik Mining and Allied Services Limited, (another renowned outsourcing company in coal mining sector.” Since 2015, Thriveni Sainik has been mining the Pakri-Barwadih coal block with the state-run NTPC (National Thermal Power Corporation). The company claims it can mine 15 million tones of coal per annum.

Another paragraph in the contract defines confidentiality: “confidential information means all information about the company. It includes among other things: our businesses, methods of doing business.”

In other words, if the company decides to start dumping illegal topsoil on land they have not formally acquired, this clause can be used. If the villager-employee says anything about it, he’d be summarily fired. On paper, of course, Thriveni-Earthmovers has a whistleblower policy.

Ganju (everyone in the village is called Ganju, a caste-based surname) also missed point 1.2, which states that his employment begins in 2017 and ends in 2018; he was under the impression that he had got a permanent job paying Rs 14,000 per month or thereabouts till old age. The contract describes him as a truck driver, but he’s actually driving around a Volvo. Point 2.3 of the contract commits the employee to consent to unilateral job changes by the company, “You now agree we may change your job description or ask you to do a different job of similar status and requiring similar skills. We may also ask you to perform duties additional to those now envisaged or those actually undertaken at any time.”

The contract highlights the highly un-ethical power dynamics that the land acquisition policy sets into motion. The land-owner becomes almost a legalised slave of the company, completely exposing the claim that ‘industrial development will bring jobs’.

Take point 14, “Summary Termination”, which states, “The Company is entitled to terminate your employment by summary notice in writing if your behavior is at any time so unacceptable (and/or in violation of the company disciplinary policy) as to go to the root of this contract.”

Here are examples of behaviour that would justify summary dismissal: “serious insubordination; or, instigating and/or participating in any subversive acts, strikes, anti-social activities; or bringing the company into disrepute; or breach of confidentiality.”

There are of course multiple other listed misdemeanours, which range from “theft, to carrying alcohol on company premises, to fraud, physical violence and bullying, misuse of the company’s property or name.” One wonders how these can be proved.

Over 60 people in Itij village and 30-40 people from Urub village have been given the posts of watchman, guard and driver in the nearby Pakri-Barwadih mine. All of them signed their contracts in English, without understanding what they were signing.

Police firings in the course of land acquisition

There have been three police firings in Karanpura block against villagers resisting their land being acquired. The first was in Keradari on July 22, 2013, when Kesar Mahto was killed; the second on August 14, 2015 at Barkagaon, which led to six injuries; the third was on October 1, 2016, when four people were killed, Mahtab Alam, Ravidas Ranjan, Abhishek Rai and Pavan Kumar. For over 15 years, 32 different companies have tried to mine the pristine North Karanpura valley. Not only is the land here multi-cropped but it is also strewn with Paleolithic remains and other evidence of human evolution.

After the 2016 firing, the government decided it would start by handing over forest and gair mazrua (un-cultivated commons) land to mining companies. Those shot dead were given ten lakhs in compensation, eight lakhs coming from the company and two lakhs from the administration. Amnesty International India has raised questions about how and why the consent of only 85 out of 38,000 people from 17 villages was taken (through signed Gram Sabha letters) between 2006-2007. Local activists have also challenged the clearance from the environment ministry. In the online form for Pakri Barwadih, the details of the number of “displaced people due to the project” and number of “Scheduled Caste and Scheduled Tribe families” is ‘Nil’ and ‘Nil’ respectively, even when many families from Urub and Itij depend on the forest for livelihood. 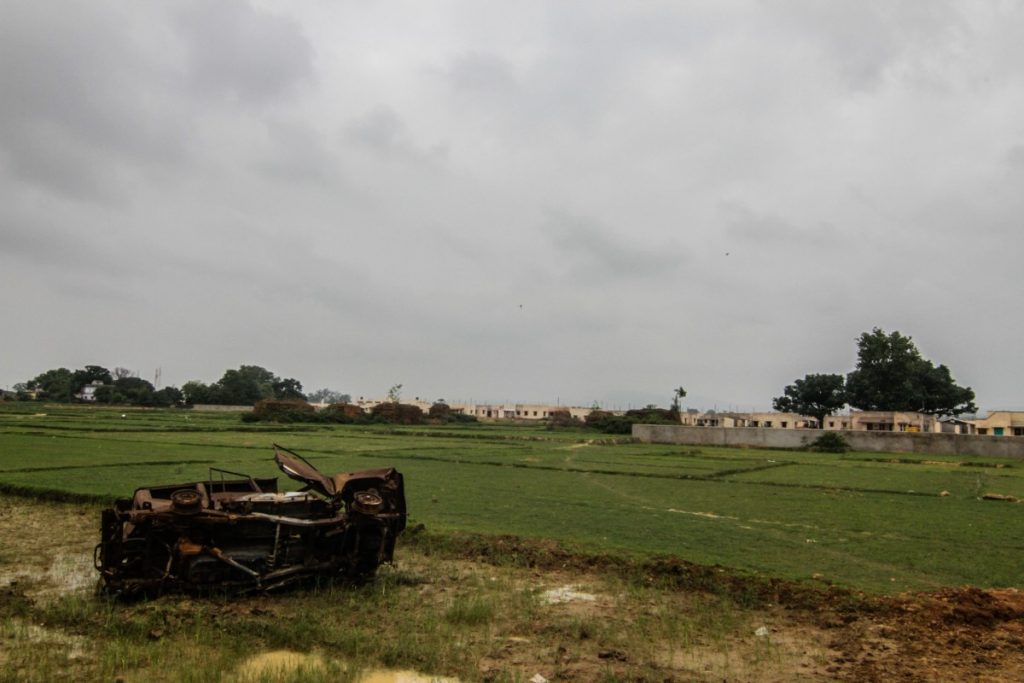 The remnants of a burnt government vehicle after a protest on August 14, 2015 still lies before the R&R colony of Barkagaon.

A Supreme Court judgment in case No 4549/2000 stated that ownership of minerals and ores beneath the ground goes to the land owner. The judgment itself concerned a case in Kerala and is under review, but the activists and local villagers across Karanpura read about it in the newspapers and invoke it in their conversations with the administration.

In 2013, an umbrella group of a large number of villagers from Karanpura-Barkagaon held a ‘koyla satyagraha‘ to argue that small-scale mining of coal and coal auctions, conducted by the ryots or peasants themselves, should be considered as a development model rather than mass-scale displacement and the turning over of resources to multinational companies.

In the last month, the villagers of Itij have started getting notices for eviction from their homes. Urub villagers believe they are next.

There is a feeling that the administration is targeting those villages that are the most vulnerable: both Itij and Urub are smaller villages, with a scheduled caste/tribe population (mostly Musahar and Ganju), and financially weak, unlike villages like Babupara, Langatu, Darikalan or Chipa Khurd, which are much larger villages that have always been at the forefront of the agitation against mining in Karanpura. The village of Itij and Urub are also the closest to the shifting mountain of coal that is slowly being built up.

The R&R colony being built near Barkagaon is a series of single-storied homes, most in varying degrees of construction. Some are already cracked, some without ventilation, and most without electricity. The buildings are unanimously rejected by the people who’re supposed to move into them. Almost all the villagers of Itij and Urub had the same phrase for these houses, which they repeated again and again: “Suer ke bokhar layak nai (It’s not fit for pigs).” 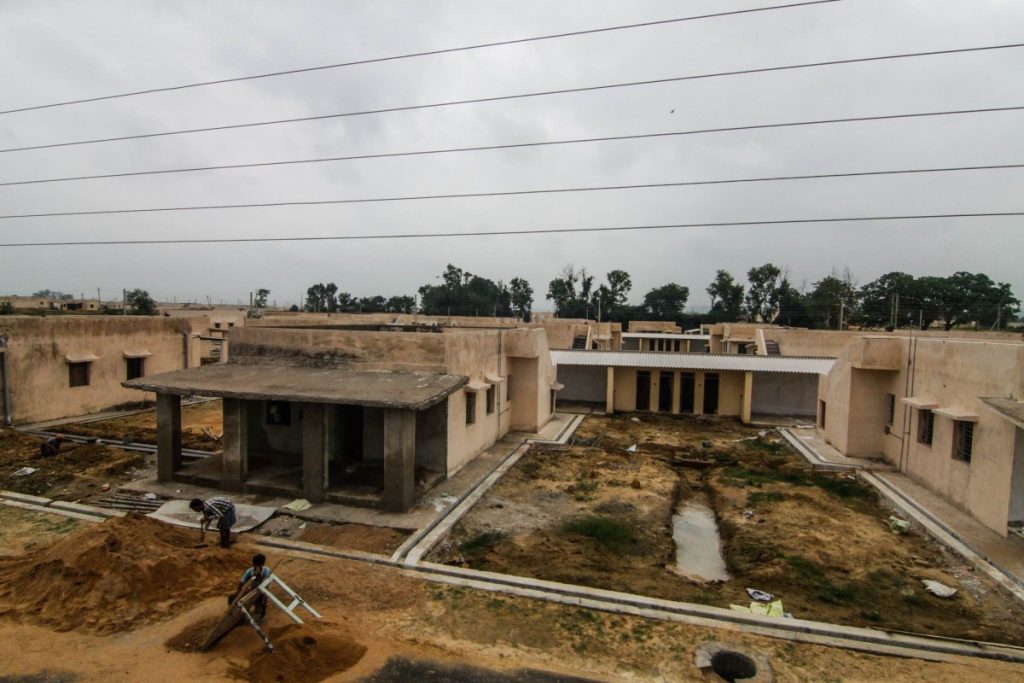 The size of the houses at the R&R colony. 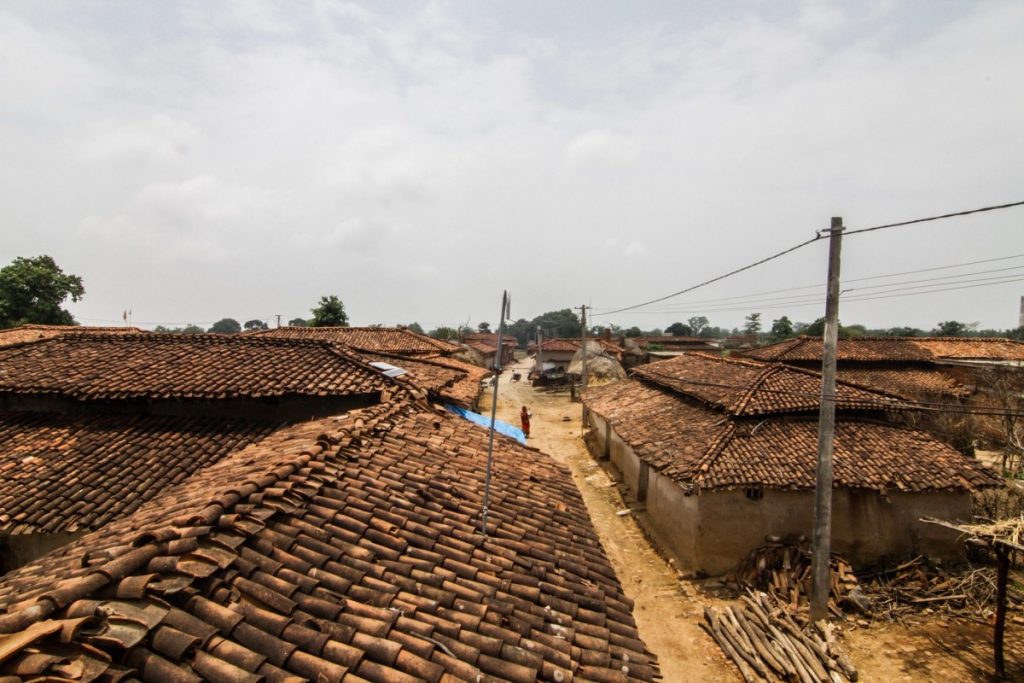 The houses at Itij.

The houses in Itij are a good part larger than the ones at the R&R colony, their ceilings are higher, they have more floor space, there is space for livestock to roam (provided they don’t get run over by JCBs and coal trucks), and there is access to rivers and wells, (wells that the villagers claim have been drying up since mining commenced).

At the R&R site, a group of workers from a nearby village are working, mixing cement. They’re from nearby villages, aware that someday they may also be displaced for coal mining. When asked if they might end up here, one worker shrugged, saying “Bhagwaan bharosa” (its up to God) and then burst out laughing. 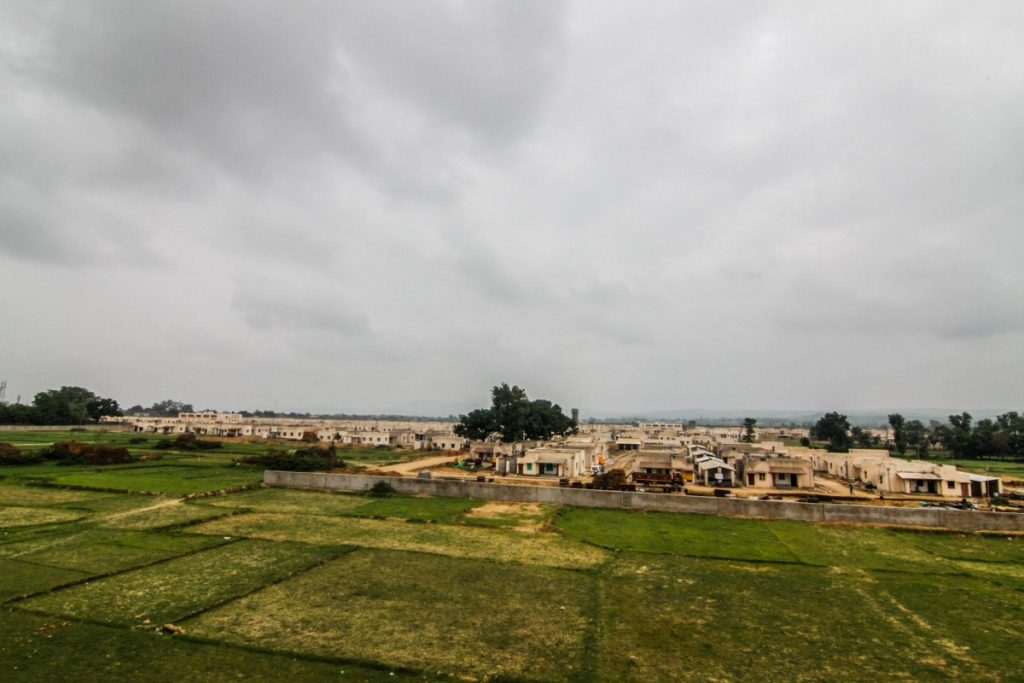 In Urub, the Musahar families gather around us, carrying their documents to show us that a lot of the Bhoodan land meant for scheduled castes was also taken by the company. They didn’t receive any compensation for this. These villagers have also been given employment contracts in English, but the ones for the post of ‘watchman’ or ‘guard’ don’t have any of the confidentiality or summary termination clauses as in Itij. Watchmen are trained to salute company and mining officials as they drive through. “If we don’t, then they scold us,” said a young man from Itij.

In the nearby village of Churchu, a massive topsoil mound overlooks their fields of corn and paddy. An old man says angrily, “The Bhumihars and Brahmins of Urub sold their land to the company and left us with this mess.”

“If they want to rehabilitate us, they should give us field for field, river for river, well for well, and enough money so we can build our homes the way we want to,” says a young man. Ten minutes later, when he was alone with me, he said that actually they don’t want to give up their land and their homes at any cost.

A month ago, the District Collector and a company official had come to Itij. When the demand of ‘river for river’ rehabilitation was brought up, apparently the District Collector just turned his head and looked away. In Urub, an old man noted, “They just note down what we want and don’t do anything about it.” The administration and company officials also had a Gram Sabha meeting on July 27, 2018, where the villagers re-iterated their demands for land for land. But again, they have heard nothing after that. 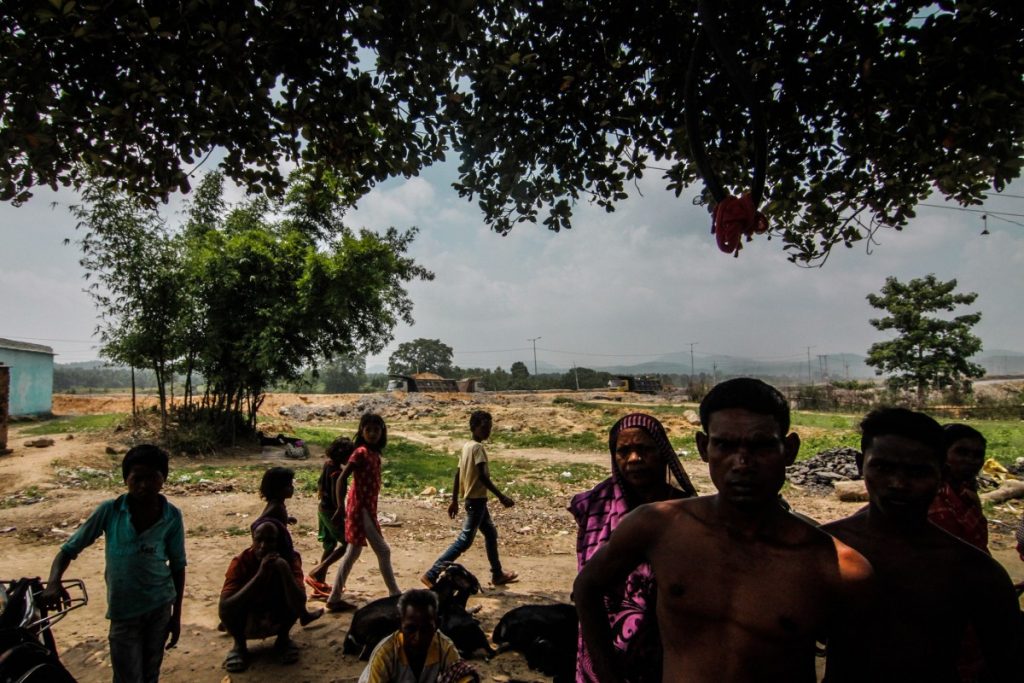 The people of Urub were quite agitated with the 23-hour soundcape of languorous coal trucks driving by their village.

“In some houses four people have been given jobs in the company,” a woman from Urub claims, while in others, no one has any work. “How does this work?” she asked.

Urub’s Musahar tola lives with a barrage of sound 23 hours a day, as trucks carry coal across their village. Their grazing fields are beyond the road and there is an hour’s break in the evening when they take their livestock across the coal dust road. With mining in the forests, with the loss of lands, a lot of the villagers have become beholden to the company.

“This company distributes soaps to us on the one hand, and on the other, sab kuch ganda karte hai (they make everything dirty),” says an old woman hysterically. A young group of children begin laughing at this.

After a few moments, the laughter subsides, and all one hears are the rumble of coal trucks (probably driven by the neighbours) going by.

(The National Thermal Power Corporation (NTPC), a public sector-run company who had handed over the mining contract to Thriveni-Sainik refused to answer queries even after repeated requests. The story will be updated as and when NTPC responds).

All photos by Javed Iqbal.