How the Clampdown Has Silenced the Cartoonists of Kashmir

“I will share those cartoons when we are allowed to work freely,” said Tariq, a cartoonist for Kashmir Images.

Srinagar: Noted Kashmiri cartoonist Suhail Naqshbandi has been unable to draw a single cartoon since the lockdown began in Kashmir on August 5 following the announcement of the reading down of Article 370 and the bifurcation of the state into two union territories.

The blackout of all communication lines including the internet, which continues to this day, has also meant that he couldn’t share his work online.

“It was like a mental siege felt by a prisoner,” said Naqshbandi, who couldn’t even access his email for more than a month due to the ongoing internet shutdown in the valley. “I couldn’t draw anything on the situation in Kashmir since August 5.”

Although he’s been journaling and noting down his ideas since August, he hasn’t been able to bring himself to draw cartoons on the developing political situation in the Valley. He said that the environment of shock and fear felt by every Kashmiri also affected him as a person and an artist.

“I had many ideas even though I was not drawing anything. I don’t know when I’ll be able to draw them and share them online for my audience, but someday I will make those cartoons and share them online for my people,” said Naqshbandi who was earlier working as a political cartoonist for the daily Greater Kashmir before he quit in May this year after facing persistent censorship.

“For a long time now, I was facing censorship of one kind or the other, the levels of which started getting absurd with authoritarian pressures on newspapers recently,” Naqshbandi wrote in a note shared on Twitter earlier this year in May.

However, Naqshbandi said that he did make several paintings, mostly of Kashmir’s beautiful landscapes, during the few months of the lockdown. He would paint the landscape and the change in colours of the different seasons of Kashmir. He said that he would like to share them online in the future.

“It was cathartic to make these paintings in such an environment of siege. It was like if you’re put in prison, you would imagine how it would be like outside the prison and draw the landscape as if you’re free from all restrictions,” he said.

No media centre for journalists

Similarly, S. Tariq, a cartoonist for the daily Kashmir Images, hasn’t been able to publish a single cartoon in his paper on the political situation in the Valley since August 5.

“All my cartooning work has ceased since August 5,” said Tariq. “This is for the first time in my career that I haven’t been able to make and send any cartoon to my paper for more than two months.”

Based in south Kashmir, Tariq had been unable to access the internet in his district since August 5. Although a media facilitation centre with internet access was set up in Srinagar for journalists and other members of the newspaper staff, no internet facility was provided for reporters and journalists based in other districts of the Valley.

“The authorities didn’t even provide a media centre for journalists in the district so that we could send our work and access the internet for some time,” said Tariq. “The journalist community in our district made several requests to the concerned district officials but no internet facility was provided to us which also prevented us from working.”

“We couldn’t send our work regularly through private transport from the district due to the restrictions and shutdown,” he said. “It would also be very costly for us to travel back and forth every day from south Kashmir to Srinagar.”

Before August 5, Tariq would normally make the day’s cartoon in the evening after reading about all the political developments of the day from the internet. After making the cartoon, he would email it to his paper in the evening. The internet blockade disrupted his routine and impeded his work as he was unable to either make or send his cartoons to the paper.

“Since mobile and even broadband internet has been banned since August 5, I couldn’t read about all the developments in the Valley,” he said. “And, how could I send my cartoons to the paper even if I made some?”

Tariq is quick to point out though that despite the communications shutdown which prevented him from sending his cartoons in time, he’d had many ideas about cartoons in the past two months which he would like to share and publish in the paper in the future when he is able to work freely.

“I will share those cartoons when we are allowed to work freely,” he said. “I was also able to make some cartoons in the past few months which I couldn’t send to the paper, but I will share them in the future.”

Kashmir’s legendary cartoonist, Bashir Ahmad Bashir, popularly known as BAB, would regularly share his cartoons on his official Facebook page before August 5. Followed by thousands of people online, his cartoons, on the political situation in the Valley, would go viral on all social media platforms.

Published every day in the Urdu daily Srinagar Times, his cartoons drew on the overall political landscape of Kashmir in his own unique style, to make a sharp comment on the political situation.

Although BAB’s cartoons have appeared in the newspaper, he has not been able to share his work online. The last cartoon shared on his official “BAB” Facebook page is dated August 4, 2019, hours before all communications lines, including mobile and broadband internet, were shut down in the Valley. The cartoon depicted the entrance of the government’s department of tourism with a nameplate that read: Director (No) Tourism.” 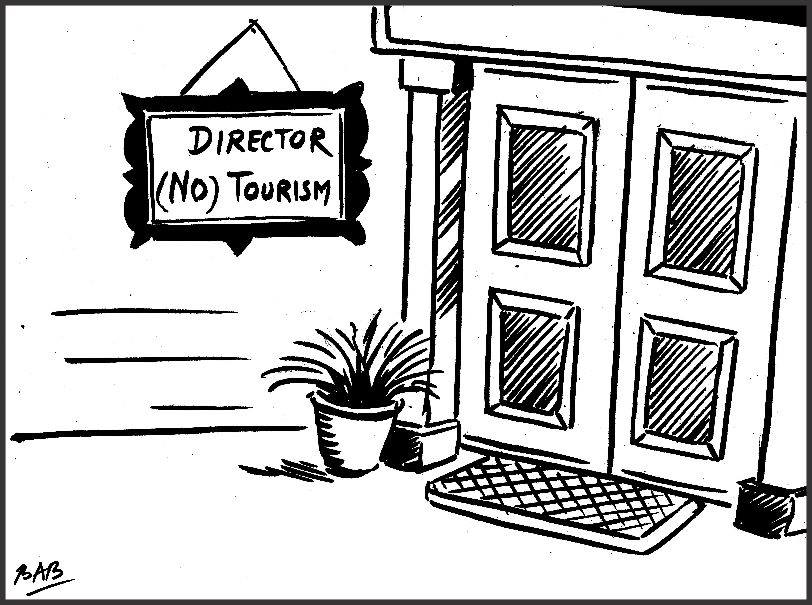 Another cartoon shared on BAB’s Facebook page on July 27 shows Mehbooba Mufti and Omar Abdullah telling an SHO in a police station that they’ve come to register a missing report for the Jammu and Kashmir assembly given the delay in holding assembly elections in the state. 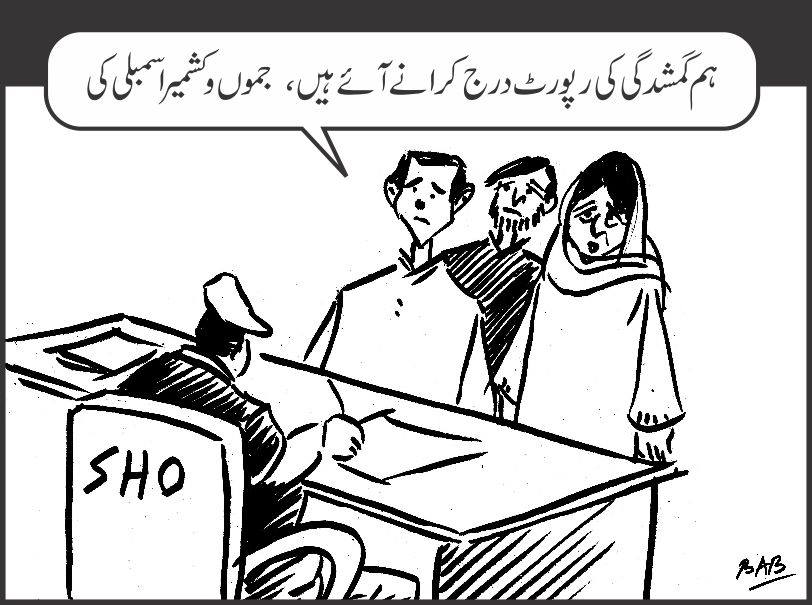 Another BAB cartoon shared on the page on August 3, a day before mobile and broadband internet was shut down, shows three former chief ministers of the state – Mehbooba Mufti, Farooq Abdullah, Omar Abdullah – and People’s Conference leader Sajad Lone speculating on the uncertain political situation in Kashmir in the lead up to August 5 when Article 370 was scrapped by the BJP government.

All the leaders from the National Conference and People’s Democratic Party were subsequently detained by the state administration. Farooq Abdullah, detained at his residence from August 5, has since been detained under the Public Safety Act (PSA).

“Dapan”, (they’re saying) Mehbooba is shown expressing in colloquial Kashmiri. The “Dapan” Kashmiri word was frequently used by people in Kashmir in their everyday conversations in the days preceding the lockdown on August 5.

Neither the governor nor the Centre had cleared the air surrounding what was about to happen on August 5, the day Amit Shah stood before the parliament to announce the reading down of Article 370 and the bifurcation of the state.

The additional deployment of forces, several official orders were leaked online, and rumours that spread fast created an environment of fear among people in the valley.

“What’re they saying,” Omar Abdullah, next to Mehbooba, asks other leaders in the BAB cartoon. “They’re saying…,” says another leader. “What’re they saying…” asks Sajad Lone, who also appears to be clueless. The cartoon reveals that none of them apparently know what is coming their way from the ruling establishment in New Delhi.