A phone survey captures the responses of people living in Delhi's shanties on their livelihoods, physical, and emotional well-being. 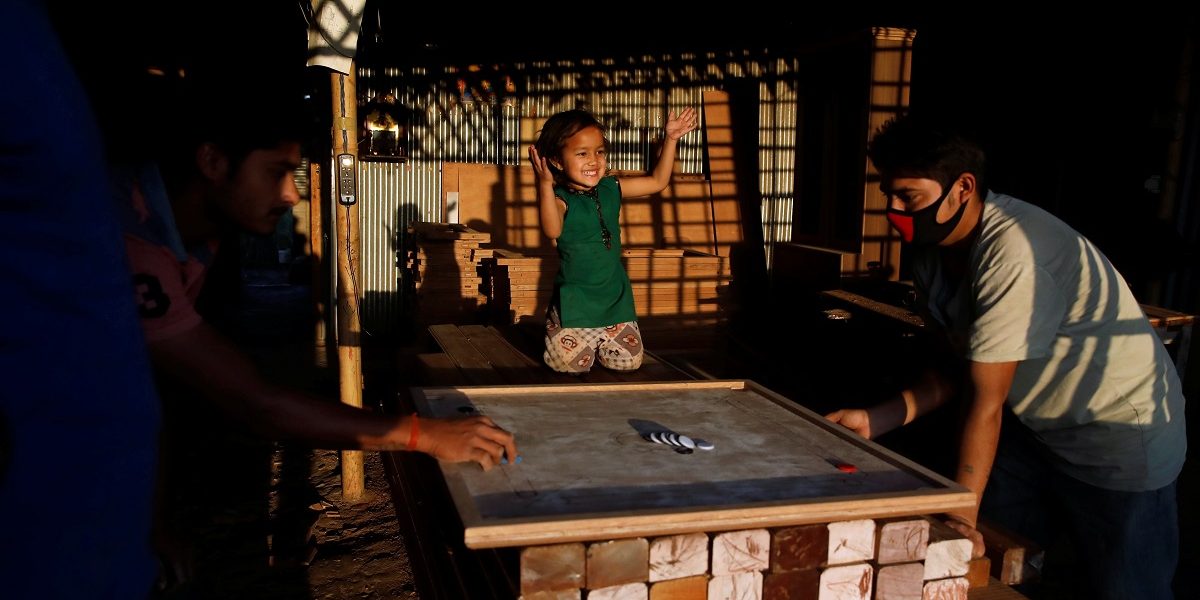 A girl cheers as her father plays carrom board at a furniture workshop. Photo: REUTERS/Navesh Chitrakar

The world has witnessed a huge economic shock due to the COVID-19 pandemic. Starting with China, a majority of countries has adopted some version of a lockdown of all social activity. In India, the lockdown started across the country on March 24 and is still ongoing. Many commentators have highlighted the plight of the poorest sections of society, particularly migrants who are trudging miles to be back home, having lost their daily wages and now depend on either the government support or private charity for food and shelter.

However, less (if anything at all) is known about how low-income families living in urban shanty towns are faring due to the crisis. What has been the impact of the shutdown on their earnings and incomes? While the state and Central governments have responded with various measures to mitigate economic hardships, such as food transfers or camps, and cash injections directly into bank accounts, how effective have these policy responses been in reaching the low-income households in urban clusters?

In the absence of hard data on the impact of the ongoing crisis, the only window we have into understanding the condition of workers in urban India is anecdotal. However, relatively large-scale phone surveys are one possible method for gauging the ground reality. But a phone survey that is representative, and hence reliable, is a challenge even in normal times in India where the poor either have limited access to phones and/or change phone numbers frequently. An existing database of respondents can potentially address some of the issues related to the representativeness of a phone survey. 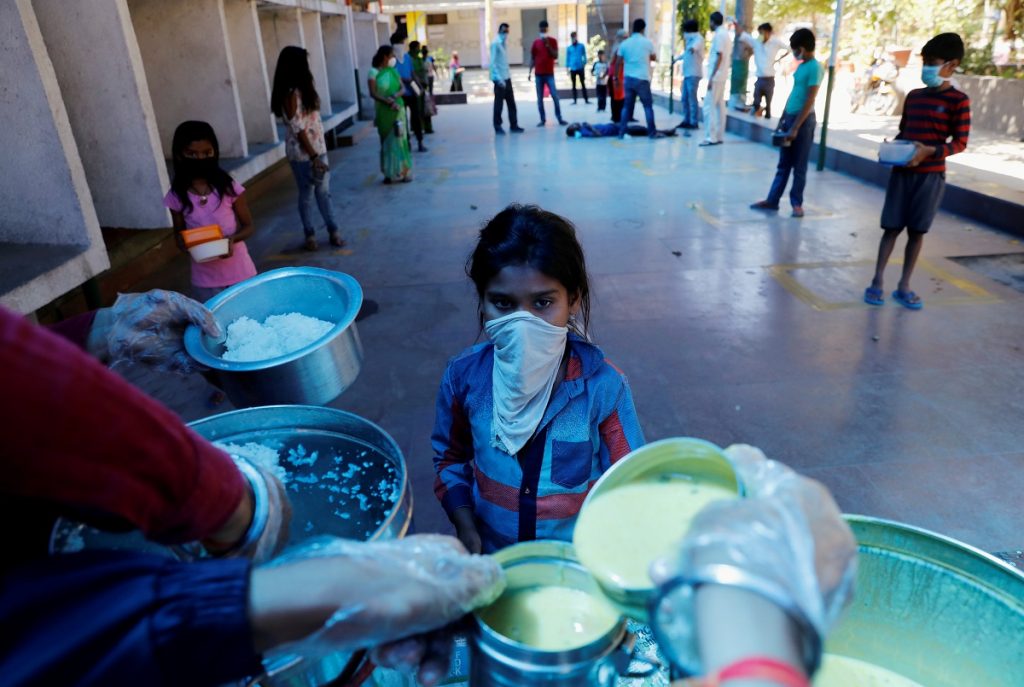 A child wearing a mask waits to receive free food being distributed by the Delhi government in a school to poor people in Ghaziabad, on the outskirts of New Delhi, March 28, 2020. Photo: REUTERS/Anushree Fadnavis

After the lockdown and social distancing rules were imposed to contain the spread of the coronavirus, we have been conducting daily phone surveys of respondents in residential neighbourhoods of Delhi’s industrial areas since April 6 to capture the ground realities as they evolve. These randomly selected respondents have been interviewed by us, in person, since May 2019 to understand their labour market outcomes, employment and livelihoods. Our sample consists of almost 1,500 households in 10 industrial estates (for example, Mongolpuri, Wazirpur and Shahdara) spread across Delhi, where we interview couples in the prime working age group of 18-45 years. The majority of our sample consists of daily-wage workers in factories, construction, or self-employed in the informal sector (for example, petty business, small retail shops) – a demographic group that is particularly vulnerable to economic and health shocks and which would need significant support through public transfers to tide over loss of livelihoods. They live in clusters of households – including both JJ (jhuggi, jhopri) clusters and resettlement colonies – with very high density which makes social distancing particularly challenging. Furthermore, assessments by the Central Pollution Control Board (CPCB) show that these clusters are critically polluted and do not meet safety parameters in terms of air, water or soil pollution – making the health of the residents particularly vulnerable to the virus, according to some recent estimates.

Although our respondents are not short-term or seasonal migrants but have been residing in Delhi for over 28 years on average, the original state of residence of more than 65% of them is outside Delhi – primarily Uttar Pradesh (over 40%) and Bihar (9%). The earnings and incomes of these families may have implications not just on their own welfare but also far away – through remittances to their relatives in the rural areas of UP and Bihar.

Survey data up until April 18, before restrictions were eased from April 20, capture responses for a subset of our initial sample of 413 households on their livelihoods, physical, and emotional well-being. Although the main respondent in the ongoing phone surveys is male, we directly asked wives a subset of the survey questions as well, giving us an insight into the gendered experiences of this crisis.

Our main survey indicates a massive shock to the livelihoods and wage earnings of these families. As expected, the vast majority of the workers in these residential areas (91% of the men) have been completely unable to work. Around 85% of the respondents who were employed before the lockdown have not earned any income from their main occupation while over half (53%) of those who were employed before March 24 did not receive their full salary for the month of March. 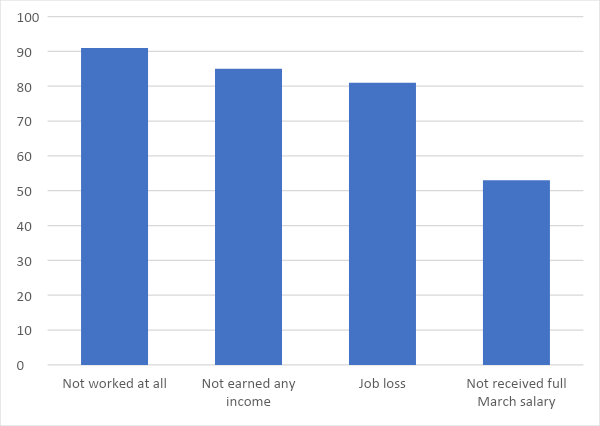 The majority of those reporting not doing any work or earning any income since the lockdown are the self-employed (32%) and wage labourers in factories or construction jobs (30%). Of those who were gainfully employed before March 24 and report some days of work post lockdown, the daily earnings have declined by 87% – from an average of Rs 365 to Rs 46 per day.

Will these workers be able to regain their employment once the lockdown ends, that is, is the income decline temporary? Among our respondents, 81% report loss of job – either permanently or temporarily. However, most respondents consider it temporary. This was the case among their closest family and friends as well – 74% report loss of job in their family and over 63% within their social network. A majority of respondents perceive their own or family’s job losses, and that of their friends or neighbours, as temporary. At this point, we cannot gauge whether it is the innate optimism of these workers that they will be able to regain their employment driving their responses, or whether these job losses are indeed temporary. As we continue tracking these workers, we will gain a better insight into the job loss situation in the aftermath of the lockdown, even as much will depend on macroeconomic factors and policy support during economic recovery.

Public transfers and other assistance

Ensuring that food items and essential supplies, such as medicines, reach the vulnerable sections has been a challenge in this period. We asked our respondents if they have had sufficient supply of food and other essential items since the lockdown. Thirty-five percent of them report not getting access to adequate food and essential items. Similarly, 30% said that they did not receive adequate medical help when needed. 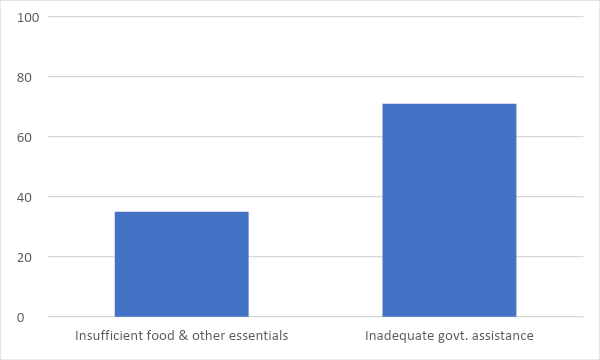 Figure 2. Public transfers and other assistance

Emerging evidence suggests high levels of emotional stress across the world as a result of the pandemic – some purely from the stress due to physical isolation and others related directly to more fundamental concerns about physical and financial well-being. 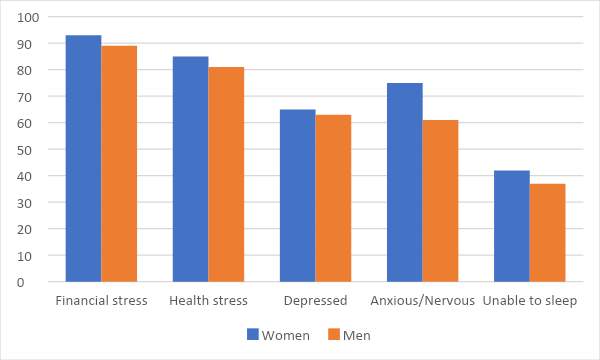 Note: Proportion of respondents who strongly agree or agree with statement on being stressed, depressed, anxious, etc.

In our sample, almost 85% of the women report feeling worried about the physical health of their families compared to 81% of men. 63% of men report feeling depressed about their situation while 65% of women do so. Strikingly, both men and women worry more about their family’s financial adequacy than about their health, though the difference is not significant. Almost 75% of women felt anxious or nervous about the current situation compared to 61% of men, and more than 1/3rd of both women and men have trouble getting adequate sleep. Across the board, women appear to be more stressed than men.

Interestingly, these households also exhibit some hope in regaining their employment because they perceive the loss of income and jobs as temporary. Despite that hope, their psychological impact is high and one can expect this to worsen if the hopes of regaining work and employment are not borne out as we move beyond the recovery period. This might also indicate that concerns around health are playing an important role, and perhaps there is also some stress about access to essential supplies, medical care if required, and so on.

Only about 10% of the sample report having fallen sick after the lockdown mainly with a combination of symptoms: fever, fever and cough, cough. There were a handful of COVID-19 positive cases that they knew of (only four respondents answered that they knew of someone who had tested positive). However, some of our sampled areas are designated containment zones for COVID-19.

While the reported physical impact of COVID-19 among our sample appears low so far (10%), the psychological impact, including those reporting stress due to health and finances, is very high (70-80%).

In terms of adherence to personal hygiene and social distancing norms, over 60% of both genders strongly agree with the statement that people living near them are not attending social gatherings, practicing social distancing, and washing hands frequently. However, 82% of the respondents report that they did venture outside their home in the past week. The main reason (93%) to leave the house was to purchase groceries and other essential items. 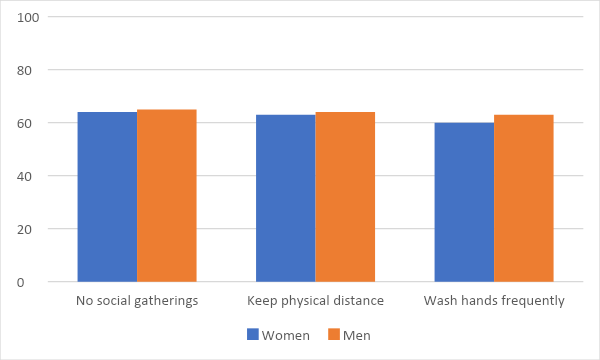 Note: Proportion of respondents who strongly agree with statement.

In spite of the fact that the majority of our survey respondents are long-term residents of Delhi, some of them (7%) are currently not located in Delhi. They are either in their native village or waiting for some transportation on a highway to make their way to their native state – primarily casual labourers or self-employed in manufacturing. However, they also include those who previously held a salaried job in the private sector. Thus the perception that it is only the seasonal or short-term migrants who are moving back to their villages may not be entirely correct – and reflects the extent of the economic and financial loss the urban poor have been subjected to.

The emerging picture is disturbing and underlines the need for a large injection of public spending and transfers, both in cash as well as in-kind, to address this humanitarian crisis and as we go into recovery mode. While job losses among the urban workers seem to be temporary so far, the majority does not appear to have received their full pay and it is not clear how social distancing norms will continue to affect their ability to earn in the future. The long-term impact on urban employment and earnings will depend to a large extent on government measures to kick-start businesses and manufacturing in the private sector.

In the concluding part of this post, we will report our survey findings following the easing of the lockdown measures from April 20 onwards.