How China Intimidates Uighurs Abroad by Threatening Their Families

Uighurs living in the US and Europe share stories about Chinese authorities going after their family members in China to suppress activism by the Uighur community living abroad. 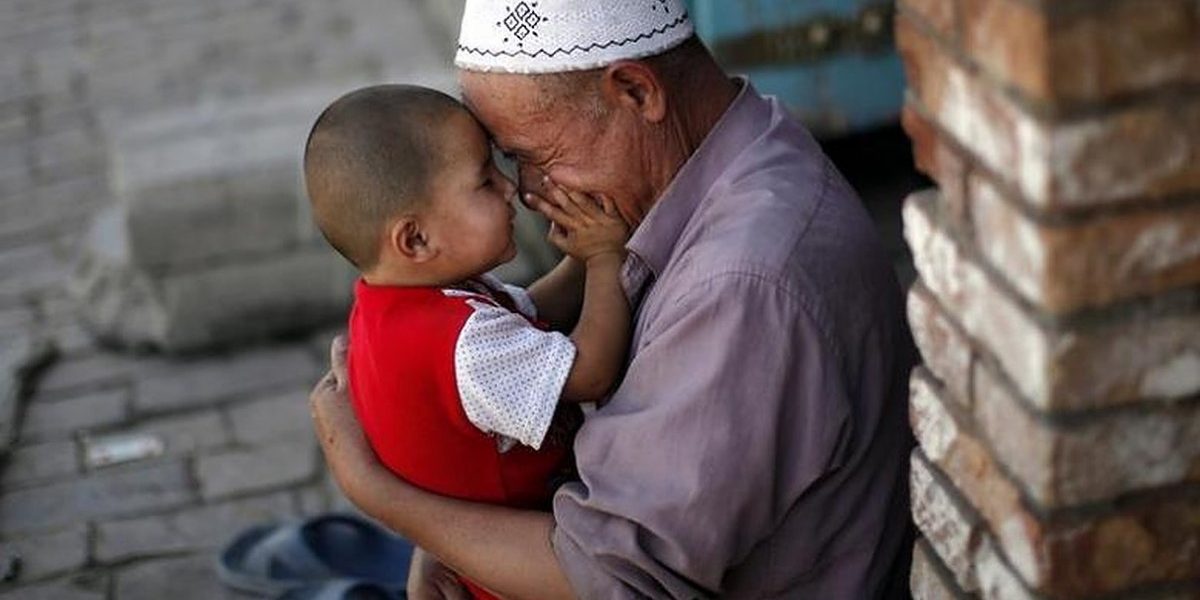 An ethnic Uighur man plays with his grandson in the old district of Kashgar city, in Xinjiang province. Photo: Reuters/Carlos Barria

At least 1.5 million Uighurs and other Muslim minorities are thought to be detained in “reeducation camps” in China’s Xinjiang Autonomous Region, in the far northwest corner of the country. Reports indicate that many of these people simply disappear from their homes and cities.

On Wednesday, ambassadors of more than twenty countries called for Beijing to end the mass detentions of people belonging to the Muslim-minority group. China describes these reeducation camps as “vocational training centres” or “boarding schools,” while defending the program as a fight against “Islamic extremism.” Human rights observers say it is a form of “ethnic cleansing.”

And now there is evidence that China is putting pressure on the Uighur community living abroad to keep them from speaking out against the mass internment of Uighurs in Xinjiang.

Also read: Review: Of Dissent, Independence Movements and the Fight for Identity by Minority Societies in China

Uighurs who fled to the US and Europe have told DW that Chinese authorities are trying to suppress the activism of the overseas Uighur community by going after family members still living in China. Activists said that their released family members were discouraging them from protesting against the internment program.

Ferkat Jawdat, a 26-year-old Uighur living in the US state of Virginia, told DW that the Chinese government has been trying to use several family members as “hostages” to silence his activism.

Jawdat’s dad applied for asylum in the US in 2006, and the young Uighur and his siblings joined their father in 2011. Ferkat Jawdat is now an American citizen. However, his mother was not granted a Chinese passport despite repeated attempts. There was no official explanation from authorities for the rejection.

Jawdat said that his mother living in Xinjiang’s Yining city was first sent to the reeducation camp for 22 days in late 2017 after two of his uncles were also interned.

“In November 2017, my mom told me in a WeChat message that she was going to the ‘school’ to study, and she asked me not to worry about her because many people she knew were also at the ‘school,'” Jawdat said. “She ended up being detained for 22 days.” 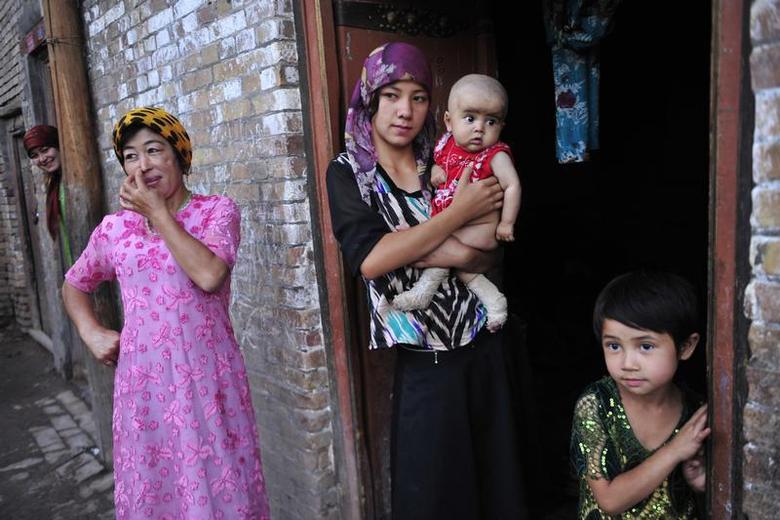 An ethnic Uighur woman (C) hugs her son as she stands outside her house with her daughter (R) and neighbours at an old residential area of Kashgar, Xinjiang Uighur. Representational Image: Reuters

Following her first release, Jawdat said his mother started to avoid conversation about his uncles’ whereabouts, and on one occasion, she told her family members in the US that she was breaking the law by talking to them on the phone.

In February 2018, Jawdat’s mother told him that she was returning to the “school.”

“She told me she didn’t know when she would come back,” Jawdat recalled. “That was the last time I heard from her for a very long time.”

Following his mother’s second detention in the reeducation camp, Jawdat started to actively speak out about the plight that he and his family members were going through.

He and three other Uighurs met US secretary of state Mike Pompeo in March 2019. However, he said this news reached China and prompted the transfer of his aunt and uncle from an internment camp to a prison in Xinjiang.

“Some family members told me that I should stop what I had been doing or I would never see my mother again,” he said. “This wasn’t the first time that the Chinese government tried to threaten me through my family members.”

But Jawat was surprised by a phone call from his mother in May 2019. She told him that she had been released and was spending a few weeks with her mother. 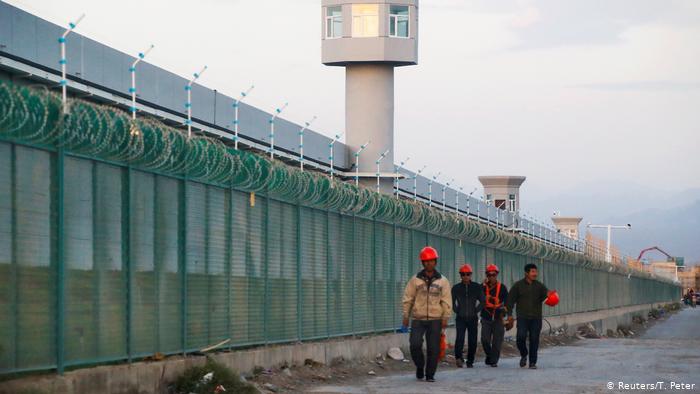 A ‘vocational skills centre’ under construction in Xinjiang. Photo: Reuters

Jawat said his mother’s story was very similar to those shared by other Uighurs who had been in the camps.

“She said that she learned Mandarin at the ‘school,'” Jawdat said. “She emphasised that she was treated well and was glad that she could finally talk to me in Mandarin.”

In addition to “praising” the reeducation camps, Jawdat’s mother also asked him to stop speaking out and reminded him not to be part of any organisation that’s against the Chinese government.

“She told me that our government is treating everyone so nicely and that she was happy that she could study at the school,” he said.

But a few days after their first conversation in fifteen months, Jawdat received news that his mother had been put back in a camp, one day after their phone call.

“I feel betrayed by the Chinese government because it was trying to use my mom to silence me. This made me feel like I can’t trust anyone, even my mom,” he said, adding that he is more motivated to keep speaking out about his mother’s detention.

Sent to an ‘ethnic unity programme’

Sarah and Anna (names changed to protect identity) are Uighur sisters from a rural eastern prefecture in Xinjiang. They were able to leave China last year, with Sarah moving to the US and Anna to Europe. Anna said that she left China because she no longer felt safe, and Sarah left to take up a job.

The first time they lost contact with their parents was in November 2018, after a WeChat message went unanswered. They suspected their parents had been taken to a camp. Then Sarah received a phone call.

“A community worker asked me if I knew why my parents were sent to the camps, and I told her that all I knew was that I couldn’t reach them anymore,” she told DW. “When I kept asking her about my parents’ whereabouts, she only vaguely told me that my dad seemed to have been detained for drunk driving.”

Sarah said the call confirmed her speculation that her parents had been sent to a reeducation camp in Xinjiang. She tried unsuccessfully for months to reach her parents until her sister, Anna, got a hold of their father via a video call at his office on March 2019. 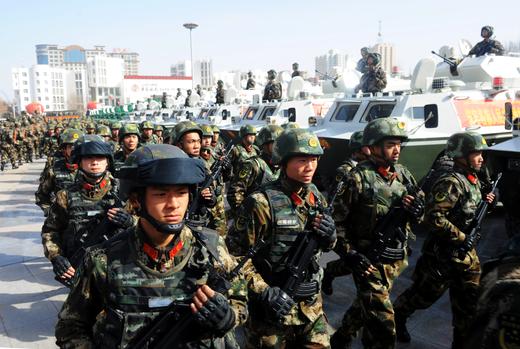 Paramilitary policemen stand in formation as they take part in an anti-terrorism oath-taking rally, in Kashgar, Xinjiang. Photo: Reuters

During the conversation, the father told Anna that he had been “living in the village,” and had been very busy with an “ethnic unity program” designed by the Chinese Communist Party (CCP). The program assigns CCP party members to live with and monitor Uighur families in Xinjiang.

“I almost cried when I saw my parents in the video, because my mom became so pale and skinny, while my dad shaved all of his hair off,” Anna said. “To me, those were very clear signs that they were sent to a reeducation camp, so I didn’t need to openly ask them about it.”

Since March, the sisters have been able to video chat with their parents in China regularly. They saw how their parents were also able to invite guests to their house or visit other relatives.

However, after every talk, the parents reminded their daughters to delete anything political that they may have shared online.

“They would repeatedly tell us that everything has been going well for them back in Xinjiang, so we shouldn’t be sharing anything online,” said Sarah. However, after a video of the sisters telling their parents’ story was published online, the tone of the conversations changed drastically.

In a heated exchange, Anna said her mom demanded that they retract the report. The mother also blamed her for not deleting anything online and abruptly ended the video call.

“My mom kept saying how wonderful their lives have been, and asked why we would say something like that on camera to ruin their peaceful lives in Xinjiang,” she said.

The next day, while she was on her way to work, Anna’s father called her again and asked her to go home immediately and delete everything she’d shared online.

“My dad cried in the video and asked me to delete everything online right away,” she said. “However, I knew I couldn’t fulfil my dad’s demands because doing so would mean I’m fulfilling the demands of the Chinese government.”

The sisters then didn’t hear from their parents for a few weeks, and Sarah was even temporarily removed from their WeChat contact list.

Since then, Anna has resumed regular communication with her parents, while Sarah is still unable to get her parents to chat talk via video.

“Even when we had major arguments, my parents would have never deleted me from their WeChat,” Sarah said. “I know they were forced by the Chinese government to do so, so I am not really mad at them anymore.”

China is too ‘powerful’ to be changed

Jawdat in Virginia heard from his mother again in late May after she was rereleased from the internment camp. He has spoken with her regularly since then, and she continues to demand that he stop his activism. 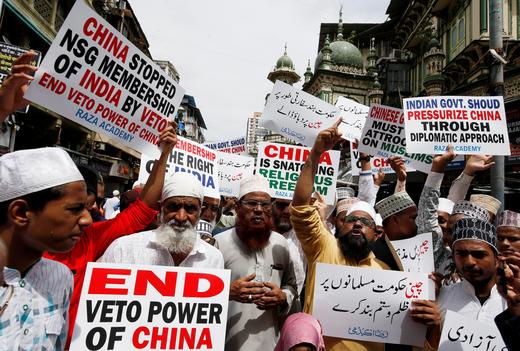 Protestors hold placards as they shout slogans during a protest against the Chinese government for detaining Muslim communities in Xinjiang. Photo: Reuters

Jawdat is still speaking out, although he admitted that his mother lives under tight surveillance.

“There are two surveillance cameras installed outside my uncle’s residence, and no one can easily visit her,” Jawdat said.

“A CCP officer even tried to first convince me to visit Xinjiang, but later told me that China is a powerful country, and what I have been doing won’t be able to change much.”

Rian Thum, a leading Xinjiang scholar at the University of Nottingham in the UK, told DW that authorities in Xinjiang have been known to use intimidation tactics similar to what Jawat, Sarah and Anna experienced.

“There have been cases where people who got out of the internment camps are told not to talk about their experiences or sign documents promising they won’t disclose what happened to them,” Thum said.

After Anna shared the news about her parents being released from internment camps online, several Twitter users hailed her story as a success. However, she doesn’t agree with such assessments and said her parents are still living under unsafe conditions.

“I don’t think my case is a successful one because my parents are still not truly free after being released from the camps,” she said.

“Just because we receive a phone call from family, or a family member is released, doesn’t mean a case is a success. We need to understand that this is not a struggle that will end anytime soon.”