The demonstrators have been protesting since June against 'meddling' by Beijing into freedoms guaranteed under the 'one country, two systems' formula. 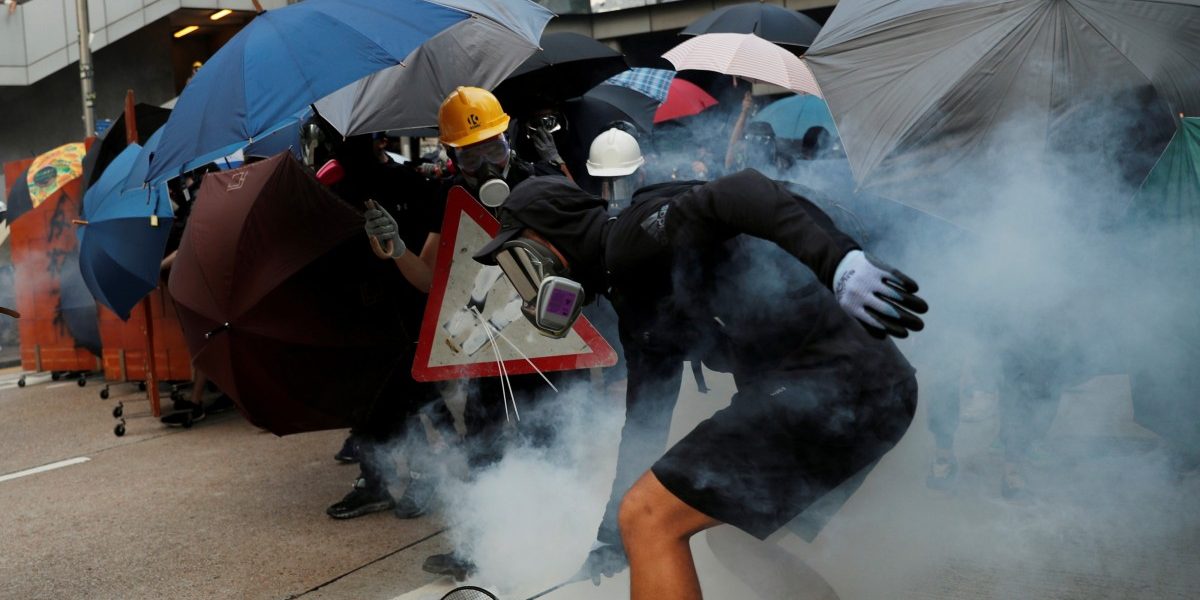 Hong Kong: Police in Hong Kong battled pro-democracy protesters at several university campuses in sometimes savage clashes, as parts of the city were paralysed including Hong Kong’s Central financial district that was tear-gassed for a second day running.

The flare-ups occurred a day after police shot an unarmed protester at close range and a man was doused with petrol and set on fire in some of the worst violence since the protests began nearly five months ago in the China-ruled city.

At the rural Chinese University near Tai Po, some of the fiercest fighting broke out at night as riot police stormed the campus where hundreds of protesters congregated, firing a barrage of tear gas, rubber bullets and water cannon.

Hundreds of masked protesters, many of them students, hurled back petrol bombs, rocks and bricks, some launched with catapults. After the clashes, dozens of the injured lay sprawled on the ground at a nearby sports pitch.

The chaotic night scenes of explosions, smoke plumes, yelling and sustained gunfire, which left scores of injured students sprawled on the ground, stoked a sense of dread among some who recalled the 1989 Tiananmen Square crackdown by Chinese troops on pro-democracy protesters in Beijing.

“The fear among the students is so strong,” said Wing Long, a 25-year-old theology student. “That’s why we’ve gathered today to stop it from happening.”

The police, however, said protesters in the campus had thrown debris and petrol bombs onto a nearby highway linking the Northern New Territories with Kowloon, bringing traffic to a standstill in a haze of tear gas smoke.

The city’s 24 pro-democracy lawmakers condemned the police in a joint statement, saying the nonstop firing of tear gas had turned the campus into a “battlefield,” while urging the international community to speak out for Hong Kong’s youngsters to “prevent the recurrence of the tragedy of 1989.”

Medics on the scene told Reuters that at least 60 people were injured.

At City University, students in hard hats and gas masks had spent much of the day barricading the campus, making home-made shields, and stockpiled bricks and petrol bombs on bridges and other approaches.

They overran the campus and smashed up glass panels in the adjacent Festival Walk shopping mall and set fire to a giant Christmas tree.

Earlier in the day, more than 1,000 protesters, many wearing office clothes and face masks, rallied in Central for a second day during lunch hour, blocking roads below some of the city’s tallest skyscrapers and most expensive real estate.

After they had dispersed, police fired tear gas at the remaining protesters on old, narrow Pedder Street. Police made more than a dozen arrests, many pinned up on the pavement against the wall of luxury jeweller Tiffany & Co.

“Our society has been pushed to the brink of a total breakdown,” senior superintendent Kong Wing-cheung told reporters.

The demonstrators have been protesting since June against what they believe to be meddling by Beijing in the freedoms guaranteed under the “one country, two systems” formula put in place when the territory returned to China from British rule in 1997. Tough police tactics in response to the unrest have also fuelled anger.

China denies interfering and has blamed Western countries including Britain and the United States for stirring up trouble.

Protests and road blockages ran late into the night in multiple districts including Mong Kok, Tin Shui Wai and Tai Po, where a truck was set on fire.

Hong Kong leader Carrie Lam said protesters were being selfish and she hoped that universities and schools would urge students not to take part in the demonstrations.

Most universities, and some schools, said they would close again on Wednesday. The Hong Kong Jockey Club said all off-course betting centres would also be closed ahead of Wednesday’s racing at Happy Valley as a safety precaution.

The United States on Monday condemned “unjustified use of deadly force” in Hong Kong and urged police and civilians alike to de-escalate the situation.

Yang Guang, spokesman for China’s Hong Kong and Macau Affairs Office, said China condemned the dousing of the man with petrol and setting him on fire. He demanded that the person responsible be arrested as soon as possible.