Having fled religious persecution in Afghanistan and Pakistan, the refugees who were promised permanent citizenship of India face bureaucratic harassment every year when they extend their visas. 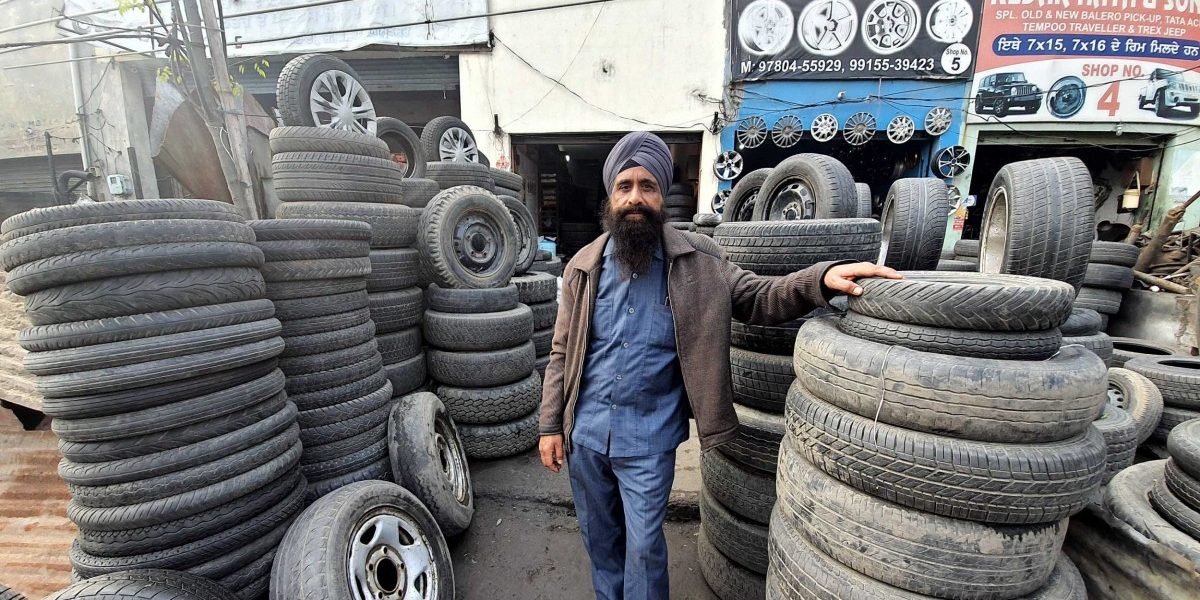 Saran Singh, who fled from Peshawar in 1999 with his family, says he applied for permanent citizenship 10 times in the past 22 years but is awaiting for it.

Chandigarh: Torn between his identity and his livelihood, 48-year-old Sardar Singh, who had fled Afghanistan in 1992 in the wake of attacks on the local Sikh community, died as a refugee in Amritsar in 2015.

Similarly, 62-year-old Anant Kaur, another refugee from Afghan’s Nangarhar province who had settled in Amritsar in the late 1990s, died as a refugee in May 2020, still hoping for permanent citizenship of India especially after the Citizenship Amendment Act (CAA) was passed in December 2019.

Under the CAA, non-Muslims from Pakistan, Bangladesh and Afghanistan who had fled to India due to religious persecution and settled in the country before 2014 were promised citizenship. But though the Act was passed in December 2019, it is still inactive since the Central government has not yet framed and notified its rules.

On a visit to West Bengal last month, Union Minister for Home Affairs Amit Shah blamed the delay on the COVID-19 outbreak.

But Manjinder Singh Sirsa, president of the Delhi Sikh Gurdwara Management Committee, who last September helped almost 200 Sikh families from Afghanistan to settle in Delhi, does not accept this justification.

“It is not a valid argument. If the Centre can push through agriculture bills during the pandemic, why can it not frame the rules of the CAA?” Sirsa told The Wire.

While the delay in implementing the CAA raises questions on the real intent of the Act, which seems to target Indian Muslims and triggered countrywide protests in December 2019 and the first months of 2020, the circumstances of Sikh and Hindu refugees in India remain unchanged.

“It is painful to keep waiting for legal citizenship in a country we thought was our natural homeland when we fled here years ago,” said Anant Kaur’s husband, 64-year-old Amrit Singh.

His 29-year-old son, Manmeet Singh, who deals in the sale and purchase of old tyres with his two younger brothers, Ajit Singh and Gurcharn Singh, said that their income is about Rs 400 to Rs 500 a day. Sadly, almost half their earnings are spent on renewing their Indian visas every year.

“Sometimes we are asked to produce our Afghan identity documents. Sometimes it is other paperwork. We are sick of travelling to Delhi every so often,” Manmeet said. “We might have earned better if all three of us were well educated. But our family has been undergoing a continuous struggle ever since we left our home in Nangarhar and there has been little time to study.” 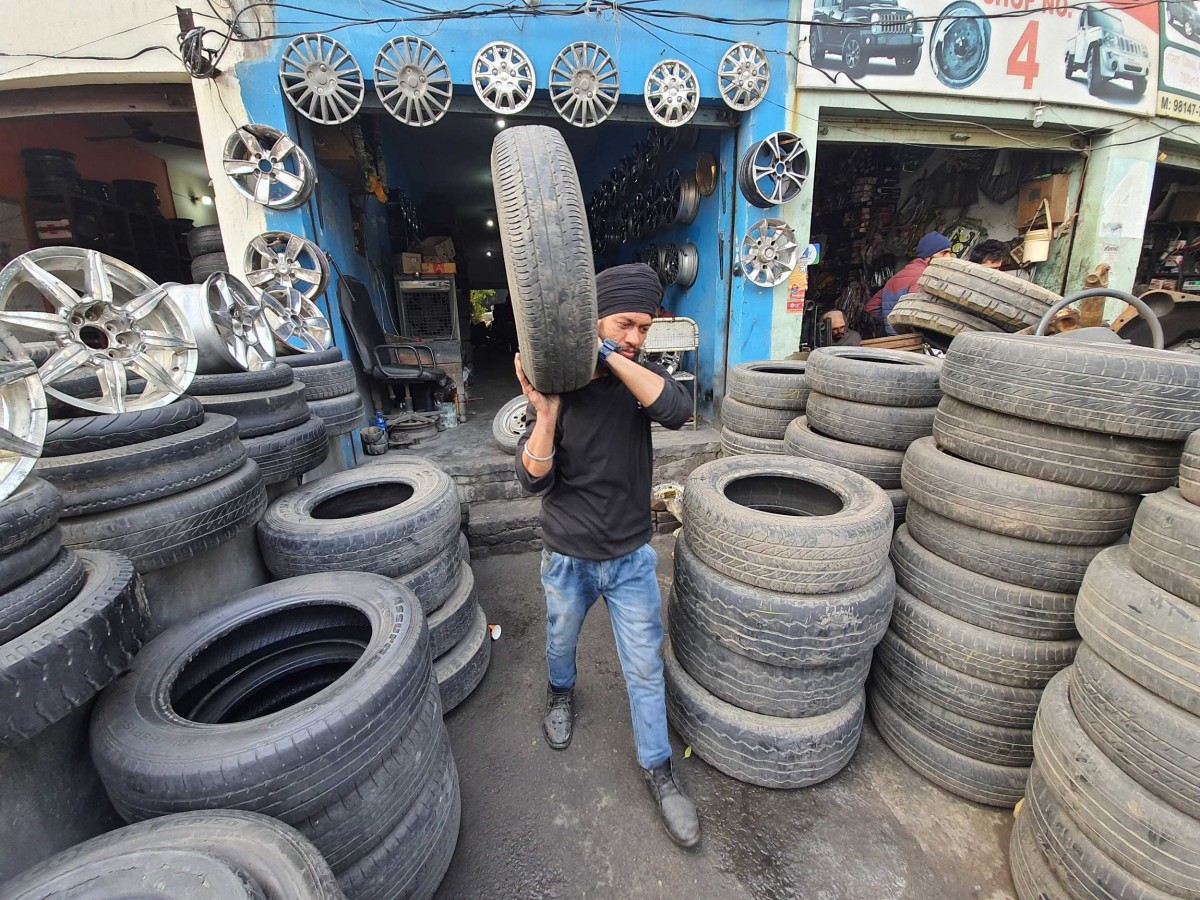 Manmeet Singh, an Afghan refugee, says half of his income is spent on extending his visa every year.

Going back to Afghanistan is out of the question, said Amrit. But remaining in India is difficult without permanent citizenship, because there are several restrictions on refugees.

“Many Afghan families who earlier lived here in Amritsar shifted to Delhi for a better future. We are somehow stuck here,” he said.

‘Free us from visa extensions’

Over the last two decades, about half a dozen families of Afghan Sikh refugees and about 30 Pakistani Hindu and Sikh families made Amritsar their new home. Most of them trade in vehicular spare parts and old tyres at Jahajghar market on Chamrang road.

But every year, these refugees must extend their visas if they want to remain in India. This can sometimes be a stressful process, as 33-year-old Surveer Singh, who runs Khalsa Tyre House in Amritsar, explained. 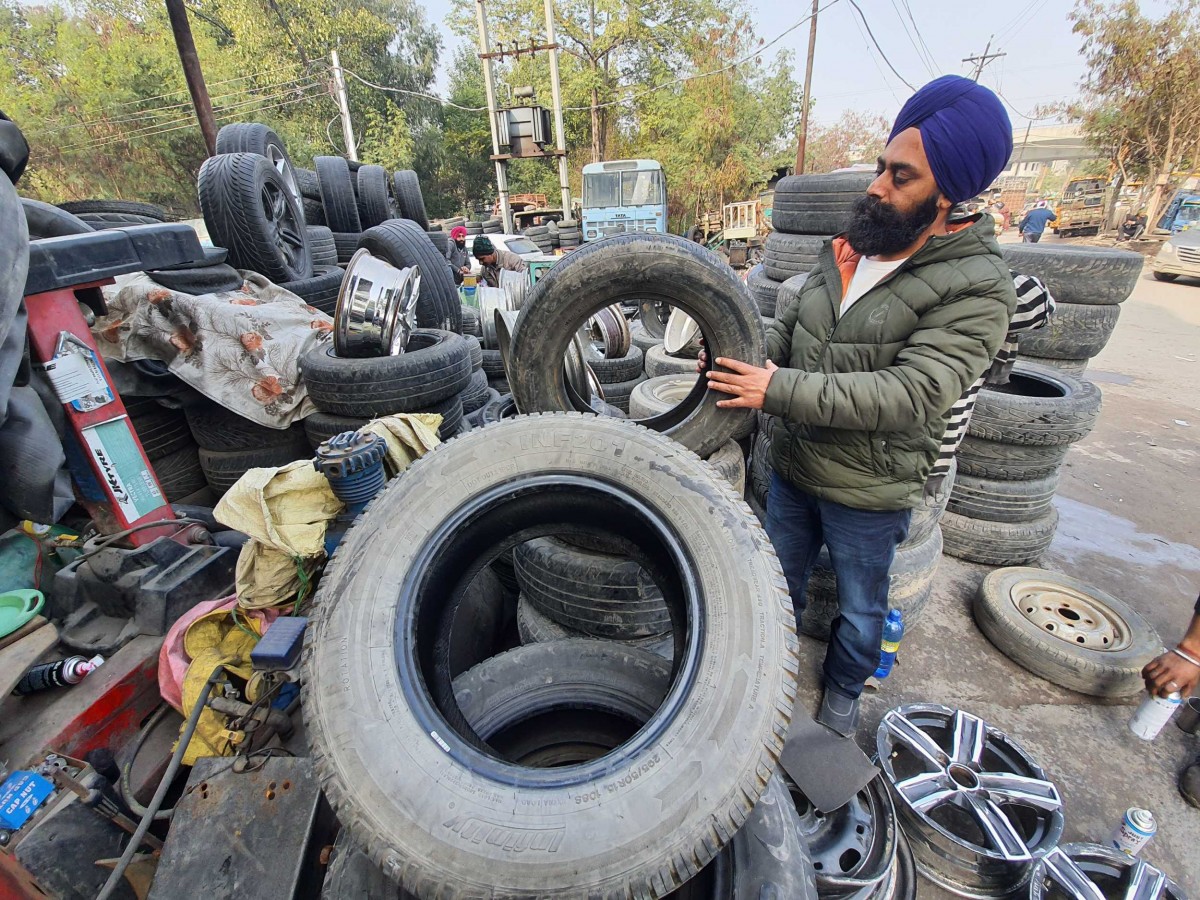 Afghan refugee Surveer Singh at his shop at Jahajghar in Amritsar.

“Our Indian visa expired on December 30, 2020. Until now, our family had its annual visa extension based on the identity cards issued by the United Nations High Commissioner for Refugees. But this year, our visa extension has been delayed because government officials in Delhi told us to get my passport extended first,” Surveer said.

He continued: “When we approached the Afghan Embassy to renew the passport, they told us to go back to Afghanistan to renew it. How can I go to Afghanistan? I don’t know anything about the country. I was barely two years old when I came here. I am Indian. I am an Afghanistan national only on government papers. If we can’t get permanent citizenship, at least free us from the pain of visa extensions every year. We have been getting visa extensions for the last three decades and running from pillar to post every year for extensions is sheer harassment.”

Like many other non-Muslim refugees, Surveer had rejoiced when the CAA was passed in December 2019. “But our happiness was short lived. The situation is the same even after the Act. If we were in Canada or another country, we would have got our citizenship papers a long time ago,” he said. “We took refuge in India, considering it our own country. Our only grudge is that we are still waiting for citizenship. The longer we stay here, the harder the rules get for us.”

The visa extension process is long and bureaucratically arduous, said Shiv Arora, whose Hindu family moved to Amritsar from Pakistan in 2005. There is a lot of paperwork and so many inquiries that it sometimes takes a month to secure an extension. Since each member of Arora’s family of five must renew her or his visa at a different time of the year, the Aroras spend almost every second month tied up in the extension process. 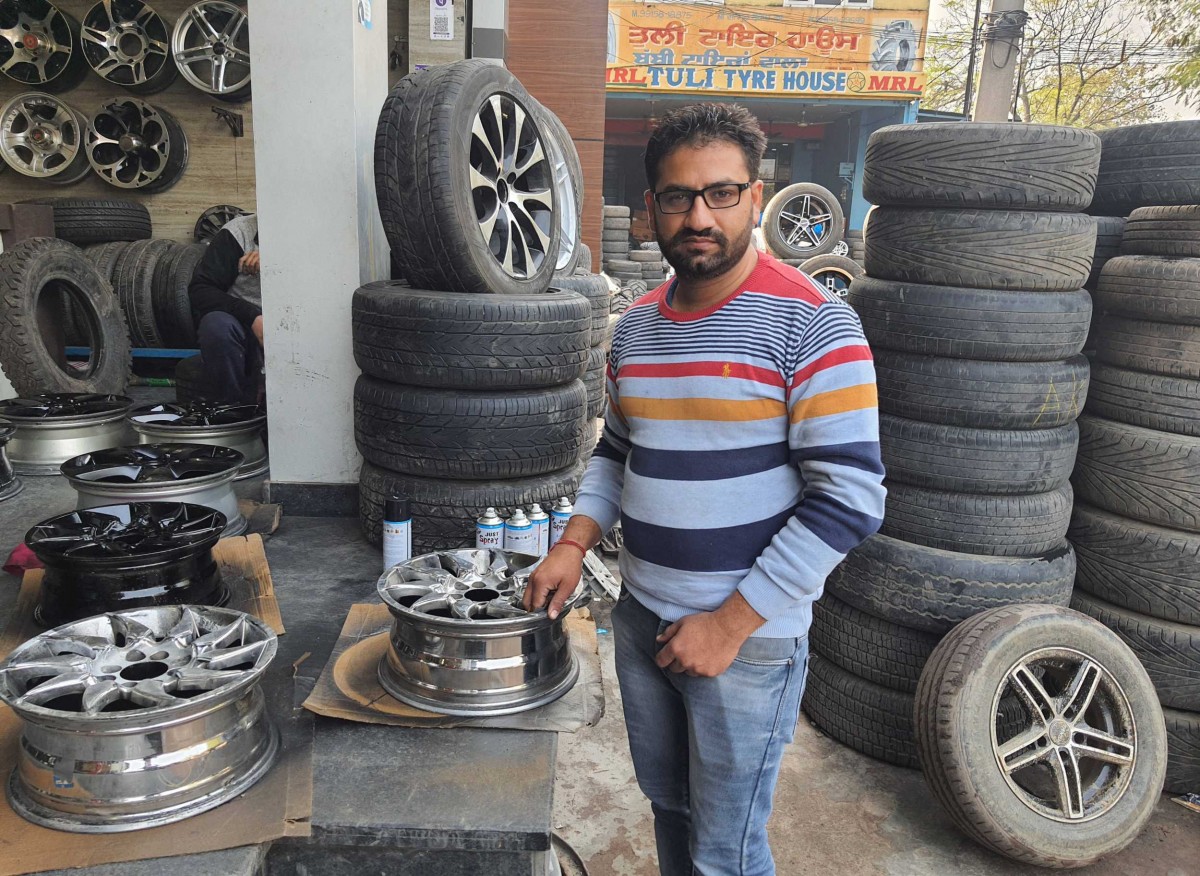 Shiv Arora, a refugee from Pakistan, says his family can’t live a life of a normal Indian until they get permanent citizenship.

Refugees who live in India on visas are also restricted by several visa rules. “To travel outside Amritsar, even if it is for two minutes, I have to get permission from the security branch first and then report to a police station when I reach my destination,” said Arora. “When I return to Amritsar, I have to report to the security branch again. As a result, I rarely leave Amritsar. We have several relatives living in Punjab, but can’t visit them. And business travel is not possible. I have to leave that to my partner or a staff member.”

Arora still believes that his family’s citizenship in India will come through some day. “Till then, there is no denying the fact that we can’t live the lives of normal Indians,” he said.

Also read: The ICJ’s Ruling on the Rohingya and What It Means for India and the CAA

‘Tired of living as refugees’

Saran Singh has lived in Amritsar since 1999, driven out of Pakistan’s Peshawar area by religious persecution. The 51-year-old has applied for permanent citizenship of India as many as 10 times in 22 years. “But we are still forced to live here on visa extensions, the rules of which keep changing,” he said.

For example, according to Saran, an earlier rule had stated that refugees who had been in India since before 2009 did not need passports to extend their visas. But now, passports are necessary.

“I did not renew my passport when it expired in 2015. Should I now go to Pakistan to renew it after I left the country? This means a huge expenditure and I will also have to close my shop for more than a month,” Saran said. “Under the old rules, we were eligible for citizenship after seven years. But I have been in India for 22 years without receiving my citizenship. My family is tired of living in India as refugees.” 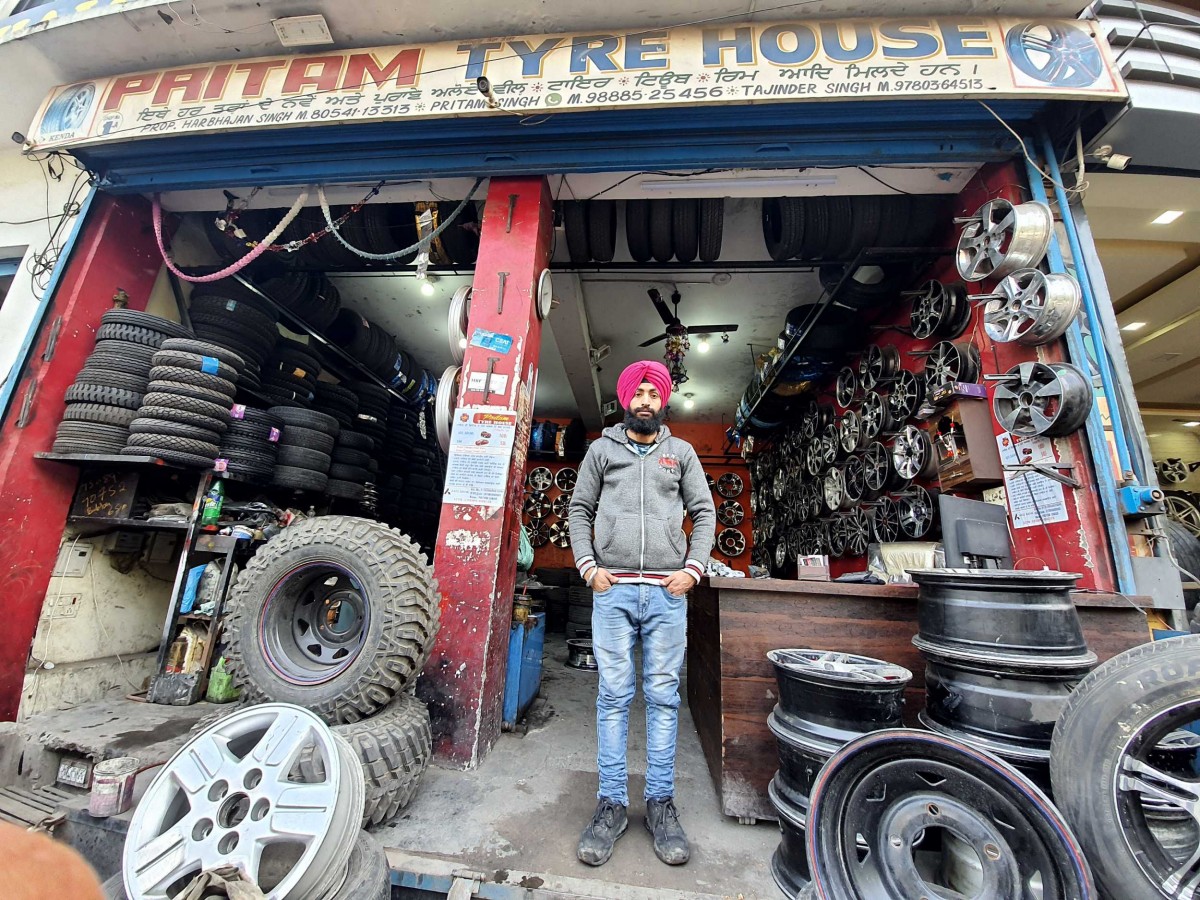 Pritam Singh, a SIkh who came to India from Pakistan, at his shop in Amritsar’s Jahajghar market.

Under the CAA, Hindus, Sikhs, Buddhists, Jains, Parsis and Christians who arrived from Pakistan, Bangladesh and Afghanistan before December 31, 2014, will be granted permanent citizenship.

In September 2020, close to 200 Sikh families left Afghanistan for India after a terror attack at a gurdwara in Kabul’s Shor Bazaar in March, in which at least 25 members of the community died.

For their first few months in Delhi, according to Manjinder Singh Sirsa, the refugees stayed in various gurdwaras. Now they have been settled in rented accommodation in and around Delhi with the help of a few NGOs who give them financial assistance so they can manage their expenses at least for one year.

But having arrived after the CAA’s cut-off date of December 31, 2014, these 200 families are likely to suffer a long and difficult road to permanent citizenship of India.

“We are happy that they are safe and allowed to stay in India on a long term visa and we will definitely fight for their permanent citizenship,” said Sirsa. “Abhi tak toh CAA ka bhi benefit nahi dik raha hai logon ko (There is no benefit from the CAA as of now). Let’s see how we can ease their lives here.”

According to media reports, there are fewer than 100 Hindu and Sikh families in Afghanistan, the remnants of a once large community of nearly 250,000 people.