In This Himachal Village, Debris From Flash Floods Has Made Half the Farmland Unusable

'We have no role in disturbing the climate. We are living peacefully, away from the daily hustle and bustle of urban life. But it is us who are suffering disproportionately from the effects of the changing weather,' says one villager. Chandigarh: Padma Chhoing’s family owns 34 bighas (seven acres) of land in Gue village in Himachal’s Lahaul & Spiti district, nestled in the high reaches of the Himalayas. From Gue, India’s border with China is not far away.

Speaking to The Wire, Chhoing said that they can only grow one crop a year and green pea farming is the only livelihood source in the village. A decade ago, their income from pea farming was approximately Rs 4 lakh a year.

“Now, it has halved as debris – boulders, stones, sand and mud – from flash floods has destroyed almost half of our agricultural land and made it unfit for farming,” he said.

According to Chhoing, there is now a layer of debris, eight or nine feet deep, on the affected portion of their fields, making the land near impossible to recover.

In the winter of 2016, Chhering Tandup, Chhoing’s uncle, spent almost Rs 60,000 to recover the part of their eight-acre field that was destroyed by a flood of debris in 2013. However, another spell the next year wiped their efforts away.

In their recent representation, submitted online to National Commission for Scheduled Tribes (NCST) last week, they noted that almost 17 hectares of farmland have turned barren in the village; almost half of their total cultivable land.

Chhoing told The Wire that flash floods in the region were not very frequent in the 20th century. Agricultural land was spread across mountains too. However, things took a turn for the worse in the last 10-15 years as the incidence of floods increased rapidly.

He and the others in the village, who belong to Bodh tribe, hold climate change responsible for their current situation.

Chhunit Chhering, another villager, told The Wire that earlier, rainfall in their region was scant. Now, the incessant rainfall in the area has disturbed its whole ecosystem. 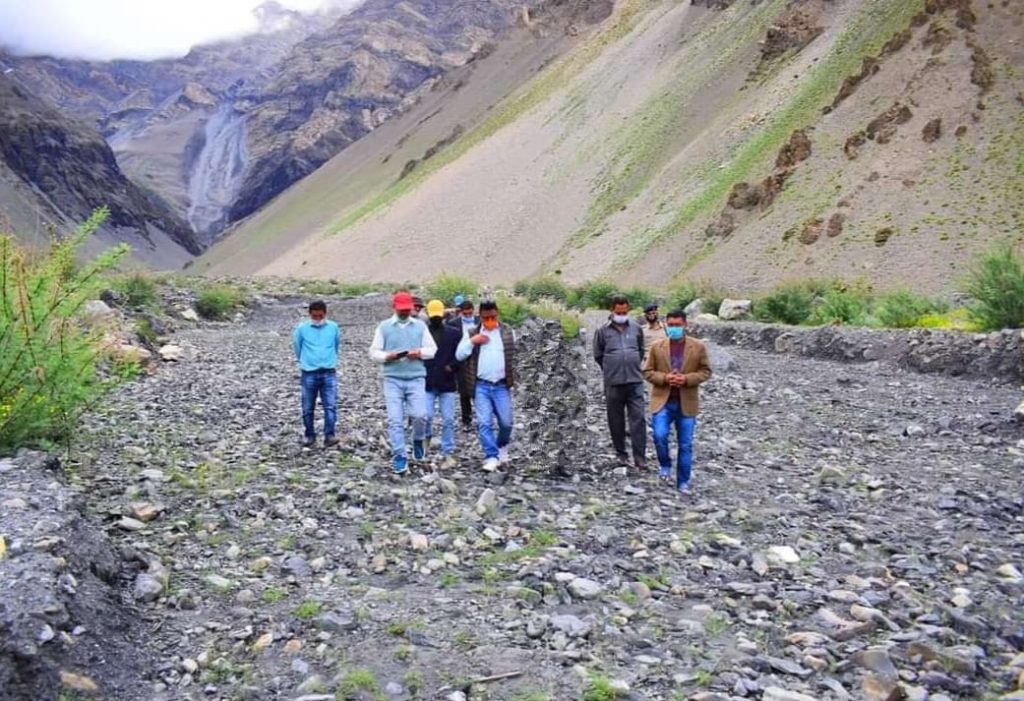 Villagers walk over the debris that once was a lush green field in Gue village. Photo: Special arrangement

“We fear that it is cloud bursts that often lead to debris and rock falls,” Chhering said. “During the monsoon season, we have to take shelter in and around the monastery area that is located at a height.”

The tale of the monastery

There is an interesting tale linked to the village monastery. In 1975, the mummified body of a monk was excavated, following an earthquake in the area, and was later placed inside the monastery.

The monk was identified as Sangha Tenzin of Tibet who is said to have died 525 years ago in this very area.

It is believed that the Tenzin undertook a slow starvation under a slow, natural self-mummification process. With his mouth open and his teeth visible, the monk, according to villagers, symbolises the ‘Living Buddha’.

Villagers believe that he sacrificed himself to save the village from a curse. Ever since his body was recovered, the locals have revered him deeply. Twice a day, an earthen lamp is lit in his honour.

The villagers often pray with the hope that the monk will rescue them from the impacts of the rapidly deteriorating ecosystem of the village. There’s even a special prayer meet held in his temple before every monsoon season where the locals pray for the safety of their fields and houses.

The present curse of climate change-induced flash floods, however, appears to be a complex hurdle to overcome.

Despite prayers, floods have not stopped

“We have no role in disturbing the climate. We are living peacefully, away from the daily hustle and bustle of urban life,” Chhoing rued. “We have no industry that pollutes the surroundings. Our whole life revolves around farming and grazing domestic animals. But it is us who are suffering disproportionately from the effects of the changing weather, simply because the people in the plains hardly bother.” A tractor submerged in a field after flash floods in 2020. Photo: special arrangement.

As these floods persistently eat into the local families’ livelihood options, their economic and social impacts are huge. With their incomes shrinking, the families have less money to spend on the education of their children.

The villagers are forced to look for new avenues of employment outside the village. Many are taking up petty jobs as labourers under the Mahatma Gandhi National Rural Employment Guarantee Act (MGNREGA); some are even driving taxis in order to sustain their families.

Kunga Angchuk, who is forced to work as taxi driver in Spiti’s Kaza town, said that he lost around 15 bighas of land in flash floods, which resulted in the financial hardships for his family.

“Our minds are often restless, worrying that floods in the future may wash away everything and leave us in peril. That is why it has become a tendency among villagers to find jobs elsewhere,” he said.

There is also a social aspect to these changing realities. Chhoing told The Wire that his older brother, also residing in the village, has had difficulty in finding a suitable match for marriage, despite the fact that he has a job as a government teacher.

“It is because people of other villages are afraid of marrying their daughters into flood-hit villages like ours. They are also aware of the fact that landholdings in our village has gone down and therefore, the futures of our families are at risk,” he said

Fights for rehabilitation still on

Since 2010, the village has been pushing for the rehabilitation of the flood victims. The villagers, with the help of the local administration, found 25 hectares of land near their village in the Dhar Karjamba (‘Shalachey’ in the local language) area

This location, they said, would be safe from floods in the summer and avalanches in winter, and it will be enough to rehabilitate all those who lost their agricultural land to floods back in Gue.

The new location, villagers believe, will also act as a contingency. If tomorrow, the entirety of Gue is claimed by these floods, they would have a place to permanently settle.

However, the villagers later discovered that the state revenue department hardly owns any vacant land in Lahaul and Spiti, outside of villages and towns.

Most of the vacant land in this district comes under the forest department, despite Spiti being a cold desert. According to locals, vegetation in the region can only been seen around the areas inhabited by humans.

As per the information obtained by the villagers under the Right to Information (RTI) Act, the Himachal government, in 2015, had approached the additional principal chief conservator of forest of the Union government for the diversion of the 25-hectares land for the rehabilitation of the flood-hit Gue villagers.

Later, as per the reply from the Union forest ministry, the proposal was rejected, saying that the Union government a does not allow for the diversion of forest land for the purpose of rehabilitation.

District forest officer (Lahaul and Spiti) Hardev Singh Negi told The Wire that there is no provision under the Forest (Conservation) Act, 1980 for the transfer of forest land in the names of individual. This is why the proposal was rejected, even as the state government, as well as the local MLA, had rigorously followed the proposal.

In their latest representation to the NCST and the Himachal chief minister’s grievance cell, dated April 17, 2022, the villagers argued that since the Bodh tribe living in Gue is a notified tribal community under Schedule 5 of the constitution, the governor of Himachal Pradesh has special powers to waive off the relevant provisions of Forest (Conservation) Act and transfer the land to the villagers for the rehabilitation.

Tanzin Tandup, president of the Youva Mandal Sangha Club in Gue, told The Wire that they would personally meet both the chief minister and the governor in Shimla next week and push for the waiver of the relevant provisions of the Act.

He said rehabilitation is important not only for their livelihood, but also to for the villagers to sustain themselves culturally and socially.

“Being a tribal community, we have been given certain privileges by Indian constitutions, which authorities must exercise for our survival. If government help is delayed, we will be doomed,” he said

“We cannot convert these banjar (unproductive) lands into cultivable land because of the large stones and mud. The flood may turn to our homes as well one day, as the source is at the top of our village,” Tandup added.

According to him, if the villagers are rehabilitated to the identified place, Dhar Karjampa, they will take care of it and ensure afforestation and greenery.