Reports have said that police filed an FIR against unknown persons even though the assaulters' faces are clearly visible in a video. 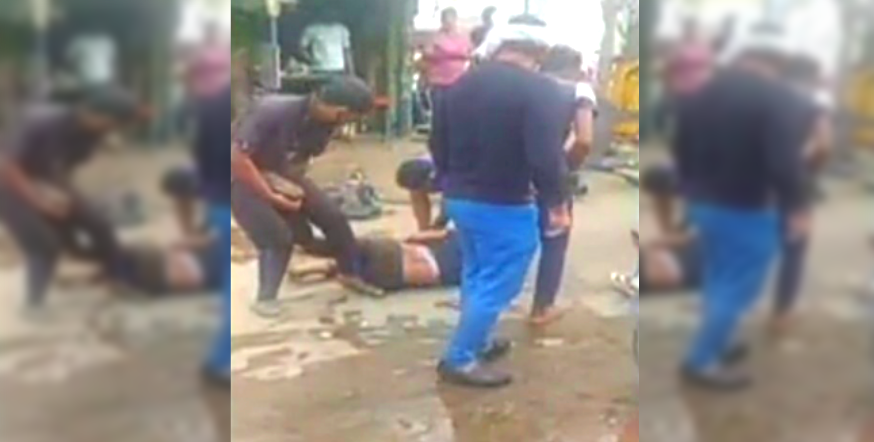 A screengrab of the video showing the cow vigilantes' attack on a man on suspicion of transporting beef, in Gurgaon.

New Delhi: A video showing a man being brutally beaten on suspicion of transporting beef in Gurgaon, while police stand watching, has been doing the rounds on social media.

NDTV has reported that the incident took place on Friday, at 9 am.

Times of India has identified the victim, Lukman, as a 25-year-old meat supplier from Mewat in Haryana. He has been taken to the hospital for treatment, with multiple fractures.

The video shows several minutes of savagery, where the man is beaten with rods and what NDTV has identified has a hammer.

According to NDTV and the version of events Lukman spoke of to TOI, the group of cow vigilantes allegedly chased his truck for 8 kms before stopping it at Sector 4-5 Chowk and beginning to rain blows on him.

When police approached them, the attackers bundled him in a truck and took him to Badshahpur village. Police gave the assaulters the chase and ultimately rescued Lukman near Sohna. The assaulters allegedly also attacked police before fleeing.

Lukman has maintained that the meat was buffalo and not beef.

NDTV has noted that even before arresting anyone for the brutal violence, police had sent the meat found in Lukman’s car for examination in a lab. One of the assaulters, Pradeep Yadav, has been held.

Police have registered a case against unknown persons even though the attackers’ faces are clearly visible in the video.

Cow vigilantism, rising from a violent expression of the belief that the cow is holy to Hindus, has been on the rise in the last few years, leading to brutal killings, lynchings and attacks on those traditionally in the meat trade.

In April 2017, Pehlu Khan, a dairy farmer, and four others, including his two sons, were attacked by self-styled ‘cow vigilantes’ in Behror, Alwar. Khan died. In August 2019, a local court in Alwar acquitted six of these nine accused, citing a lack of evidence. One is absconding.

In Uttar Pradesh’s Dadri, 52-year-old Mohammad Akhlaq was killed on suspicion of slaughtering a cow.

States like Madhya Pradesh have brought in legislation to make cow vigilantism a punishable offence.