The family was put under home quarantine and were not informed that Ganpat Makwana had been discharged. 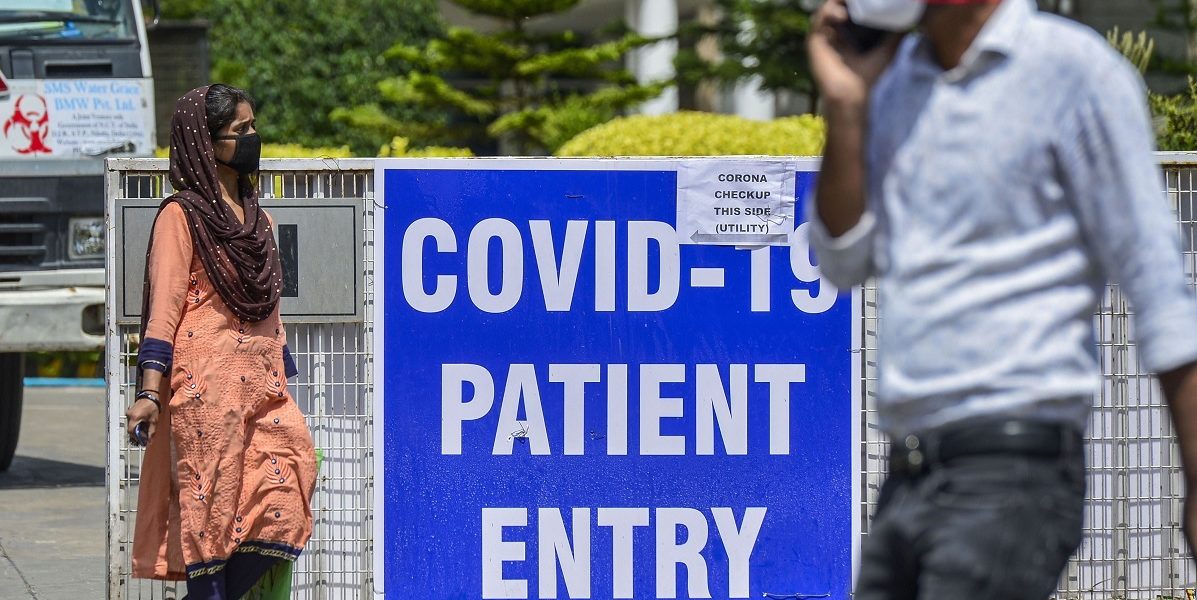 New Delhi: Two days after Ganpat Makwana, a 67-year-old resident of Ahmedabad’s Rohit Patel Colony tested positive for COVID-19, he was found dead at a bus stop about a kilometre from his home.

The family had him admitted to the Ahmedabad Civil Hospital on May 10 after he developed cough, cold and fever. On May 13, they got to know that he had COVID-19 through a daily medical bulletin on patients issued by the Ahmedabad Municipal Corporation (AMC). On May 15, when he was found dead, his family had no clue that he was being discharged.

Makwana’s son Kirti, who had accompanied his father to the hospital, said, “After admitting father, the hospital authorities asked me to leave. He did not have a phone with him so I wrote down the number of my younger brother, Dharmendra, for them, in case of any necessity.”

On May 14, the family was put in quarantine by a government team. A sticker was also placed outside their house, reading the same.

On the evening of May 14, the Ahmedabad Civil Hospital discharged Makwana, asking him to quarantine himself at home when no symptoms were found. However, his family was not informed about it. He is expected to have been dropped at a location few metres away from where his body was found, by an Ahmedabad Municipal Transport Service (AMTS) bus on COVID-19 duty. “With his consent, he was permitted to self-isolate, and was taken in an AMTS bus. Given that Dani Limda is densely populated, he may have said they could drop him nearby,” officer on special duty Dr M.M. Prabhakar told the Indian Express.

On May 15, at around 9 am, the family received a call from a policeman informing them that Makwana’s body was lying in the post-mortem room at the AMC-run VS Hospital.

According to the police, a guard noticed Makwana lying motionless at the BRTS Bus Stop at around 1 am on May 15 and made a call to the police control room at around 3 am on May 15. “The body was sent to V S Hospital and kept in the morgue. Next morning, around 9, during the post-mortem, a chit was found in the deceased’s clothes with a phone number. We called the number and asked Dharmendra, who picked up, to come to V S Hospital. He identified the body as that of his father,” V.R. Vasava, in-charge police inspector at the Dani Limda police station, told the Indian Express.

He also added that the AMTS bus through which Makwana was travelling back home, had two other coronavirus patients returning to their homes.

Makwana had got off the bus near Shah Alam Char Rasta, and it is not yet known why he was at Dani Limda, which is about 2-3 km away.

A security guard said that Makwana took his permission to have dinner there but a few hours later, the guard noticed him lying dead.

On Sunday, after Makwana’s family sought help from BJP leader Girish Parmar, who is from the Dani Limda area, Gujarat chief minister Vijay Rupani announced a high-level inquiry into the case. “The inquiry will be completed within 24 hours,” principal secretary Jayanti Ravi said.

Authorities at the Ahmedabad Civil Hospital have put the blame on the AMC for not keeping the family informed. “We are a multi-speciality treating hospital and there are corporation people to coordinate this,” Prabhakar told the Indian Express.

This is in violation of the guidelines of the Ministry of Health and Family Welfare, which say, “A communication link between the caregiver and hospital is a prerequisite for the entire duration of home isolation.”

The family also says that when they reached VS Hospital, the post-mortem was already done. Makwana’s brother Govind said that the hospital did not know that Makwana had COVID-19. They were not given any protection material like gloves, PPE kits or a hearse, for taking the body to a nearby crematorium, which is also a violation of the health ministry’s guidelines.