Ground Report: Why Is Bihar’s Fluoride Contamination Problem Not a Poll Issue?

The water contamination has led to serious health problems and physical disabilities in Churaman Nagar village. Gaya/Patna (Bihar): Krishna Manjhi is only 35, but he looks much older. His neck is bent, making him unable to lift up his head. He cannot straighten his back, and the bones of his feet are thin and crooked. He can’t walk without a stick.

Krishna is an orphan and his two brothers live in separate houses. Krishna could not get married due to his physical disability.

“Till seven or eight years ago, Krishna was perfectly healthy and used to play football with us,” says Naresh Mandal, who is Krishna’s age. “Slowly, his back, neck and knees began to ache. Now, he cannot walk without support.”

Nearly every household in the village has at least one member who suffers from a condition similar to Krishna’s. They contracted this illness due to fluoride contamination of ground water in the region.

The fluoride levels in the village’s ground water are several times higher than the permissible limit. Fluoride is a mineral naturally found in ground water. If consumed in excess, fluoride adversely affects bones, rendering them weak and causing deformities.

The Bureau of Indian Standards (BIS) has fixed the permissible limit of fluoride in water at one mg per litre. However, in 2016, the Public Health Engineering Department tested samples of groundwater from Churaman Nagar and found the fluoride levels at 3.44 mg/litre.

According to the Public Health Engineering Department, the amount of fluoride in the ground water is dangerously high for 4,157 habitats of 98 blocks in 11 districts of Bihar. In these habitations, thousands of residents like Krishna do not have access to the most basic amenities like clean drinking water. In addition to the disability that fluoride causes, it has also led to their social ostracisation. Due to government neglect, life has become tough for them.

Also read: Not Everyone Is Happy With New Embankments on the Kosi in Bihar

Unfortunately, however, none of the political parties, fixated on caste and religion, has ever raised fluoride contamination as a serious electoral issue. Deformities caused by drinking water are not a matter of concern for public representatives even in the ongoing assembly election campaign.

In his paper titled ‘Fluoride Contamination in Ground Water – The Problem and Its Integrated Management’, well-known environmentalist and chairman of the State Pollution Control Board, Ashok Ghosh, writes that excessive consumption of fluoride-contaminated water causes fluorosis of teeth and bones.

Shehla Yasmin, professor at the Department of Zoology in Patna Women’s College, says, “Due to an aquifer, fluoride level may be low in one handpump but high in other handpumps in the same village.”

In areas where people are compelled to consume groundwater despite a higher fluoride content, a large section of the population are Dalits or Mahadalits. In Churaman Nagar, a hamlet of 150 households, 80 to 90 families hail from the Manjhi (Mushar) community while the rest belong to the Pasi and Sav castes.

According to the National Family Health Survey-4, only 6.4% of children between the ages of 6 months and 23 months have access to a balanced diet in Gaya. In addition, 52.9% children under the age of five are dwarfed and 53.1% children are underweight.

Saraswati Kumari is just five years old, but bow-legged. Her hands are deformed and she is unable to stand straight.

“She was a healthy child when she was born,” says Sarita Devi, Saraswati’s mother. “After two years she started limping. When the doctor was consulted, he prescribed a medicine, but it had no effect.”

Sarita’s husband breaks stones at a nearby hill and earns Rs 200 per day. “We are poor and could not afford to continue her medical treatment for long,” says Sarita. 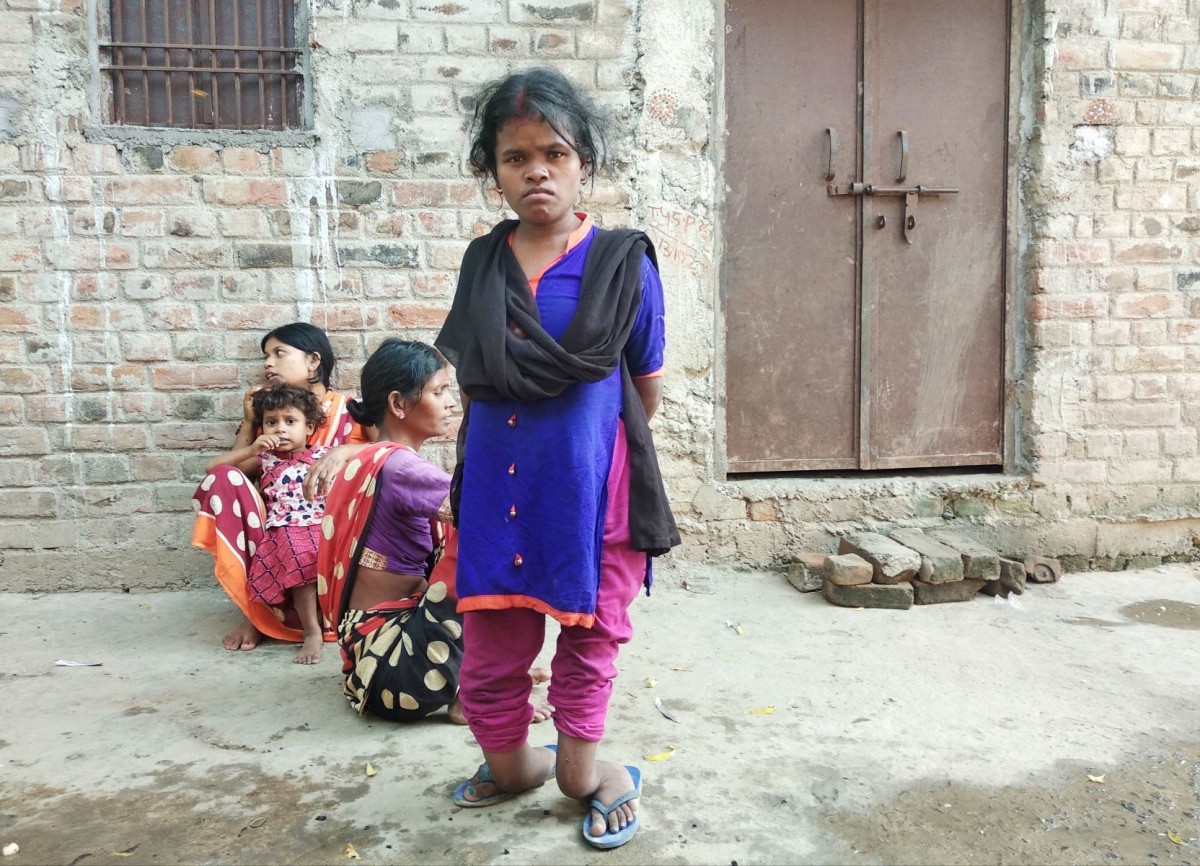 Breaking stones or working as labourers in agricultural fields is the livelihood for many other families in the village, as 90% of the population here is landless.

In order to provide clean drinking water to the people of the hamlet, the Public Health Engineering Department of Bihar installed a gigantic machine a decade ago. But the machine has been out of order for a long time.

Ram Pravesh Manjhi, who carried out maintenance work on the machine, says, “I was hired to operate the machine for Rs 2,000-2,500 per month. I got the salary for three to four months, after which the machine stopped and so did my income. Since then, no government official has visited to see if the machine is functioning.”

At present, some families are getting clean drinking water from filters installed by an NGO, but most families are still consuming fluoride-contaminated water.

It is noteworthy that under the Seven Resolves Programme, also called Saat Nishchay, in 2016 chief minister Nitish Kumar had promised clean drinking through piped supply to every house.

On March 3, 2016, a letter issued by the Department of Public Health Engineering stated that Rs 7,439.25 crore would be spent on supplying clean drinking water in the fluoride and arsenic-affected areas of Bihar in five years. However, despite being directly accessible by a main road, the piped supply has not reached Churaman Nagar yet.

A middle-aged local resident, Jitendra Manjhi, is no longer able to work as he needs a stick to walk. He has three daughters and two sons. His 17-year-old son is providing for the family at present.

“I have been unable to do any work for seven years,” says Jitendra, sitting on the ground. “My wife used to work as a labourer carrying brick and sand and earned for the family. After her death a year ago, my elder son is supporting us by working as a labourer.”

Here, breaking stones, or carrying bricks and sand, are people’s primary occupations. But even these jobs are irregular. Most of the men in the locality are either drunk or asleep out of tiredness.

While the entire state is buzzing with activity in the wake of the assembly elections, a cover of dullness and impassivity has engulfed this hamlet.

Ranju Devi is extremely upset with the current regime for failing to build toilets, provide clean drinking water and create employment opportunities. “The government is not providing us with any facilities,” she says. “Neither do we have access to clean water nor is the government providing employment to us.”

A group of five or six women, carrying infants in their laps, agree with Ranju Devi and complain about the government. “Instead of making us die each day, it would be better if the government blows us up with a bomb,” remarks one of them angrily.

“Government officials have visited us and noted down our problems many times, but nothing has changed,” says another one.

“Many people like you came here before, took photographs and left, but our condition is the same,” says a third.

There is resentment among local people owing to the government’s neglect and repeated visits of media persons and NGOs. They believe that their poor conditions are only used for political gains, while they get nothing except disrepute. They fear that if the pictures of disabled children are published in newspapers, the village will face stigma and no one will send marriage proposals to families here. Many people refused to get photographed citing the same reason.

While leaving the village, we met a 20-year-old woman, Sunita Devi, who was unusually short while her legs were bent near the ankle as if the bone had been twisted by a machine. At first, she refused to be photographed, but agreed later.

She says that she was perfectly healthy till the age of 7-8 years, but gradually her leg began curving. But she was fortunate, she says, because she was able to get married.

The present generation of the village, growing up with toxic fluoride in their bodies, have a twofold concern – to find work and to get married and lead a normal life despite physical deformities. But the issue has failed to find a mention in the poll rhetoric thus far.