The Sugarcane Research Centre's land was acquired to make way for a regional branch of AIIMS. Four years later, not a single brick has been laid on the new land that was allotted to it. 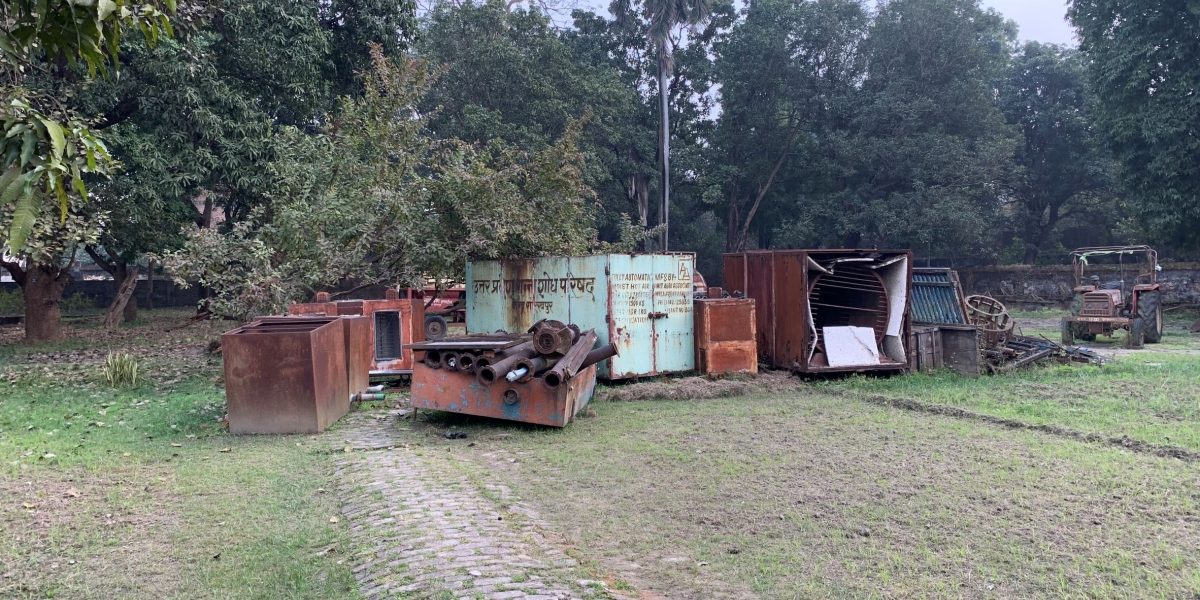 Some equipment of the research centre has been dumped in the open in the old sugar mill. Photo: Manoj Singh/The Wire

Gorakhpur: A pre-independence sugarcane research institute in Gorakhpur in Purvanchal, also known as the sugarcane belt of Uttar Pradesh, is facing government neglect after it was displaced to make way for a regional branch of the All India Institute of Medical Sciences (AIIMS). The research institute was allocated land in Pipraich, 19 km away from Gorakhpur, after the premises was acquired for the construction of the AIIMS building. However, even after four years, not even a brick has been laid for the displaced institute – owing to which research and seed culture work on sugarcane varieties has come to a complete halt.

Sugarcane is cultivated on about 1.25 lakh hectares of land across four districts of Gorakhpur. Most of the sugarcane cultivation is done in the Kushinagar district. Despite this, however, 13 out of 22 sugar mills in the four districts have closed operations and only nine sugar mills are currently functional – five in Kushinagar, two in Maharajganj and one each in Deoria and Gorakhpur. 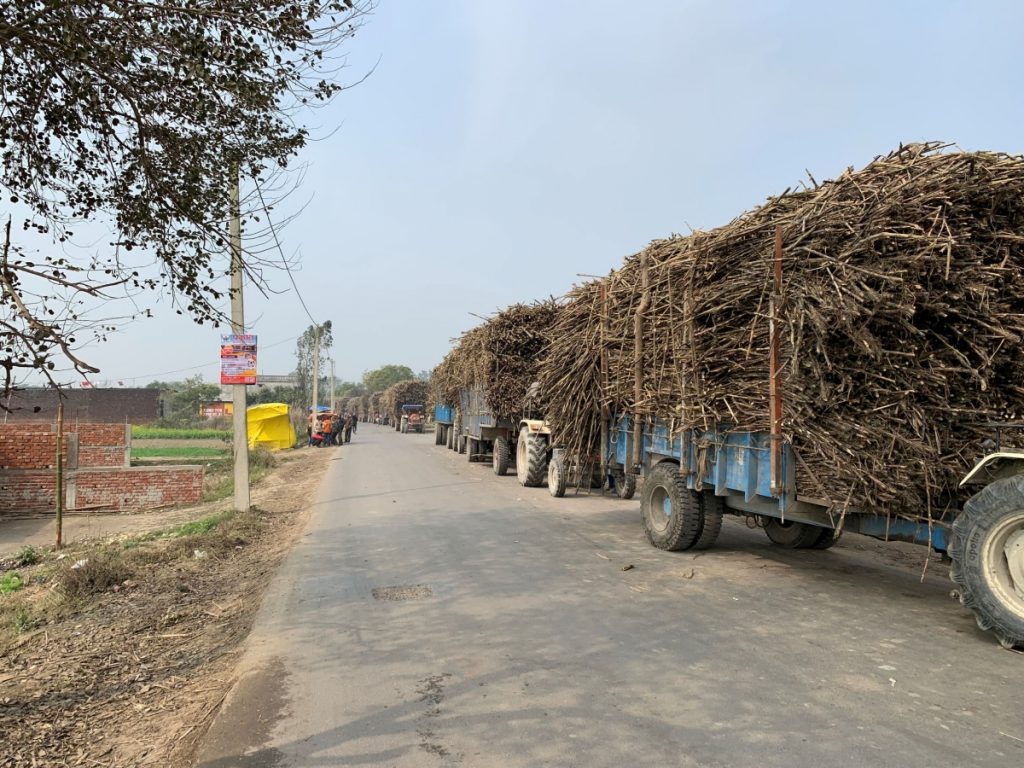 The one in Gorakhpur, at Kunraghat, was established in 1939, in view of large-scale sugarcane cultivation in eastern Uttar Pradesh and to provide improved crop varieties more suited for drought-ridden, waterlogged and fertile areas. Spread over 41 hectares of land, it also offered them scientific information about the crop and developed varieties.

Before being displaced from Gorakhpur, 10 lakh farmers were directly or indirectly associated with the Sugarcane Research Institute, which catered to the sugar mill areas of Gorakhpur, Maharajganj, Deoria, Kushinagar, Basti, Siddharthnagar, Sant Kabir Nagar, Ballia, Mau, Azamgarh, Barabanki and Moradabad.

Sugarcane farmers of the region have benefited immensely from the institute, which has developed several high yielding and high sugar-producing varieties. Earlier, the productivity of sugarcane in this area was 35 tonnes per hectare which has now increased to 70 tonnes per hectare.

When the decision to move the institute out of Gorakhpur was announced, 23 research trials were in progress there. The institute had 32.96 hectares of cultivable land where good quality varieties of the crop were grown by sugarcane farmers in addition to a fully-equipped laboratory. The premises also housed the Deputy Cane Commissioner’s office, a Sugarcane Training Centre, an Agricultural Defense Unit, a Soil Training Centre, a Seed Store and a Soil Survey Office, all of which had been added later. The institute had 487 other trees, including mango, mahua, jackfruit, teak, sheesham, neem, amla, bael and guava, which were chopped down. 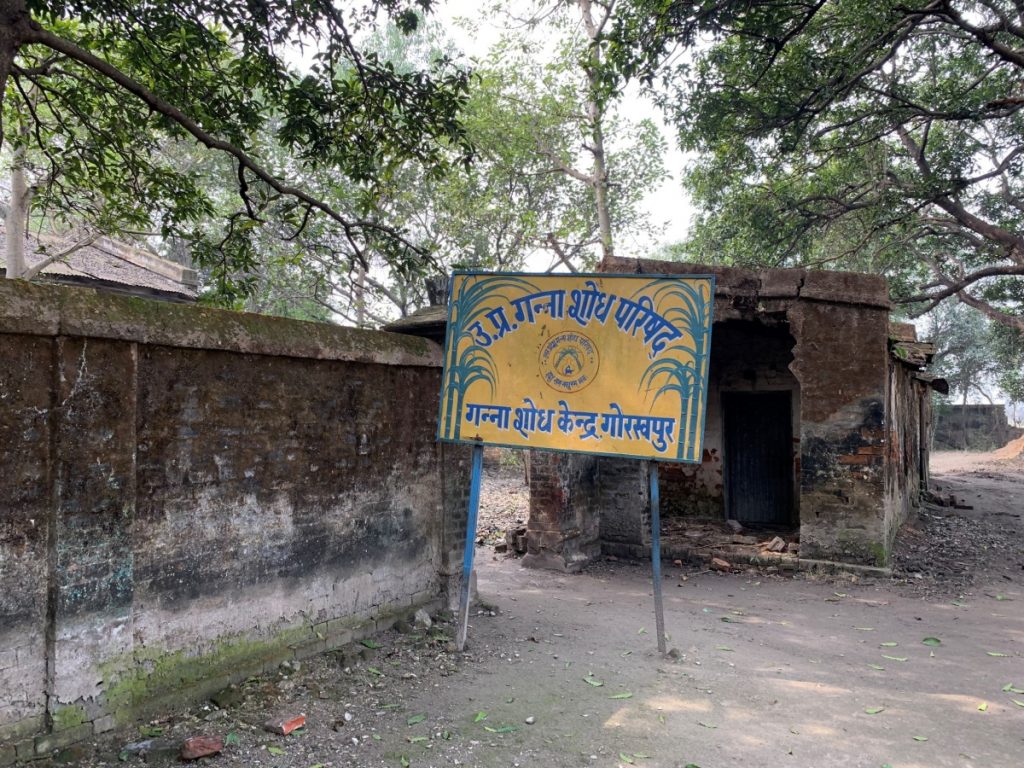 In 2015, AIIMS in Gorakhpur was proposed and a search for a suitable tract of land ensued. At first, the stretch under the Sugarcane Research Centre was also included as a prospective option, but owing to the institute’s import, the idea of ​acquiring land for AIIMS was dropped.

The then Akhilesh Yadav government had proposed to allot land to AIIMS at Khutahan, but a delegation found the land unfit for the purpose – arguing that the place was not connected to a four-lane road. Though the Samajwadi Party government had proposed to build a four-lane road near Khutahan, the BJP government at the Centre opposed the idea, as did local politicians. The proposed land was disputed and a court case between the forest department and a former landlord was pending, reports said.

Meanwhile, Gorakhpur MP Yogi Adityanath strongly advocated for AIIMS to be constructed at the sugarcane research centre. He faced backlash from several organisations which argued that since sugarcane cultivation was carried out on a large scale in Gorakhpur and surrounding areas, shifting the institute would adversely affect research. They also pointed out that the Centre is situated near the Air Force Centre in Gorakhpur, which was not a feasible location for a medical institute. But no heed was paid to these arguments and an expert panel from Delhi declared the land as best suited for AIIMS. Subsequently, the state government gave its nod to acquire the Sugarcane Research Centre’s land for the medical institute.

Before the 2017 assembly elections, the UP government finally stamped its approval on the land transfer deed. Yadav had said at the time that he was bestowing the most valuable land in Gorakhpur to AIIMS. He never fails to mention it in his rallies even today.

Soon after the land was allocated, all the 15 buildings and offices of the Institute were demolished. The Gorakhpur administration wasted no time in relocating the equipment of the Sugarcane Research Centre to the office of the general manager of an old sugar mill at Pipraich. Other offices on the land were also pulled down. They now function from rented buildings.

At the time of land acquisition, it was claimed that the new building for the institute would be ready and research work would resume in Pipraich soon. Meanwhile, the foundation stone of a new sugar mill of Uttar Pradesh State Sugar Corporation was laid in Pipraich. By November 2019, that is within three years, the mill was ready and functional. The construction work of Gorakhpur AIIMS was also carried out at a fast pace and is nearing completion. But four years on, there is still no sign of a research centre.

A plan was made to purchase 19 hectares of land near the old Pipraich sugar mill for the centre. So far, only 16 hectares has been purchased, which has no boundary wall as yet. The work of construction of a lab and other buildings for the research centre has not even started. Some equipment of the research centre has been dumped in the open in the old sugar mill’s GM office premises, while the remaining is stacked up in rooms gathering rust.

In Pipraich, the research work at the institute has come to a standstill. Seed cultivation was started here after the allocation of land last year. For this, many species of sugarcane were sown in an area of five hectares, but due to water-logging following heavy rains, the entire crop dried up. The crop also suffered the red rot disease. Now, preparations are being made to plant sugarcane again. The crop that was sown in the new land was destroyed. Photo: Manoj Singh/The Wire

Gyaneshwar Mishra, the in-charge of the Sugarcane Research Center, said that a proposal of about Rs 30 crore has been sent to the government for the establishment of the centre. A building and a lab will be constructed only after funds are released by the government. He claims that the Union government has now started the work of cultivating sugarcane seeds.

The land allocated for the research centre is situated along the Gorakhpur-Narkatiaganj railway line. There is no outlet to drain excess water from the land. The water from surrounding areas also flows and collects here. Unless the drainage system is improved, the research centre will not be able to culture seeds here and the sugarcane plants will keep drying up as a result of waterlogging.