German Student Made to Leave India for Protesting Against CAA

Jakob Lindenthal, an exchange student at IIT Madras, was told that he had violated visa regulations.

New Delhi: A German student, who participated in protests against the Citizenship (Amendment) Act, 2019 in Chennai, was asked to leave India on Monday by the Bureau of Immigration officials.

According to a report in the Hindu, Jakob Lindenthal, a student from the Technical University of Dresden on an exchange programme at the Indian Institute of Technology, Madras, was informed that he had been in violation of visa regulations.

Lindenthal, who hails from south Germany, was summoned to the BOI office in Chennai on Monday and questioned on a range of topics, including his views on Indian politics and the anti-CAA protests. After the inquiry, he was informed that he would have to leave the country immediately and reapply for a visa if he wanted to visit again.

Though the German Consulate offered to give him contacts of lawyers for help, feeling unsafe, he decided to leave, sources at IIT told the Hindu.

Lindenthal had been in India since July and his programme was to end by May 2020. He still had a semester to go as part of his exchange programme.

Though Lindenthal was scheduled to board a flight in the early hours of Tuesday, his flight got delayed by nearly four hours.

Speaking to the Indian Express, Lindenthal said he had received “oral directions” to leave India from the Foreigners Regional Registration Office in (FRRO) in Chennai.

“After I reached Chennai this morning, my course coordinator advised me to meet immigration officials immediately. When I reached there, they cited some administrative issues related to my residential permit in India. After I resolved their queries and it was clear that there were no issues regarding my residential permit, they started asking me about my politics and hobbies. It was an extensive casual conversation. They asked about CAA and my participation in anti-CAA protests,” he told the Indian Express.

Lindenthal said that he was also asked about his proximity to Chinta Bar, a student collective at the IIT, which had organised the protest.

“I distanced myself from all such groups, I explained. At one point, the officer, referring to my decision to take part in protests, said I was uninformed, that I should not have attended protests when I didn’t know what I was protesting about. I disagreed. I replied that it was all about basic human rights of people…The conversation was not aggressive, I was moderate in my answers and explained my views,” Lindenthal told the Indian Express.

“I do love the IIT-M campus, I love India but I am concerned about illiberal extremes in the country…In Germany, nobody is ever evicted for participating in a legal demonstration,” Lindenthal said.

In a statement, Chinta Bar said that it extended solidarity and gratitude to Lindenthal “for being part of struggle to protect the rights of people in this country and his concern for humanity”. 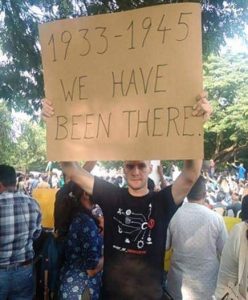 At anti-CAA protests in the campus, Lindenthal held a placard that said, “1933-1945. We have been there,” in reference to the Nazi regime in Germany and another placard that read, “No Democracy without dissent”.

Bhaskar Ramamurthi, director, IIT Madras, told the Indian Express that he was out of station and did not know about the incident. Head of the physics department K. Sethupathi and dean S. Sivakumar said that they were unaware of the incident. Sources at ITT said that an official had sent a report about Lindenthal’s participation in the protests to “higher-ups”.

A senior FRRO official told the Indian Express that while he was unaware of Lindenthal’s case, if a German student had attended a protest, it was a “clear case” of violating visa rules for foreigners staying in India. “His visa may be cancelled soon,” the official said.