Days before the May 1 attack, two 'unarmed' Naxals were killed by security personnel, and villagers were 'illegally' detained for helping them. 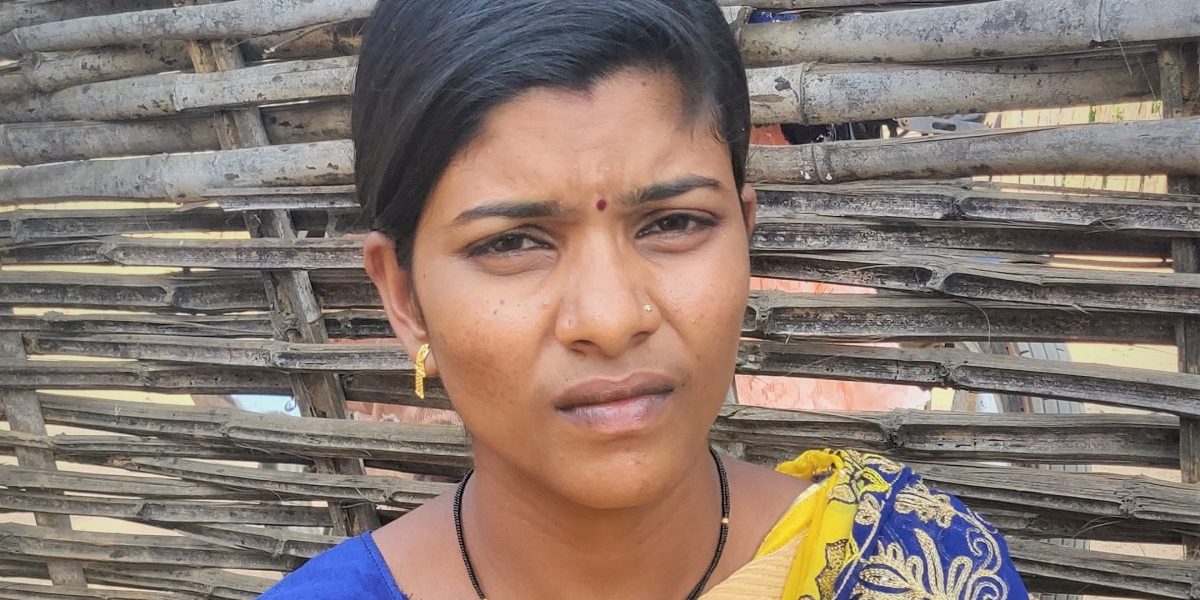 Chhaya Lekami and her eight-month-old daughter Vaishnavi were 'illegally' detained by the Gadchiroli police. Her husband Vishnu is still in their detention. Credit: Sukanya Shantha

Markanar/Gundurwahi (Gadchiroli, Maharashtra): In Markanar village, deep inside the Dandakaranya forests in Gadchiroli district, 22-year-old Chhaya Lekami struggles to give an account of what she and her eight-month-old daughter Vaishnavi have had to endure for the past two weeks.

The mother-daughter duo was allegedly illegally detained at the Kothi Armed Outpost of the Gadchiroli police for four days, without any clear grounds for their detention. Their release too was sudden, and yet again without any explanation.

But Chhaya’s worries did not end with her release. On April 27, two days prior to her detention, the sophisticated C-60 commandos’ unit of the Gadchiroli police had dramatically airlifted her husband, Vishnu Doke Lekami, from their village Gundurvahi – less than two km away from Markanar, where she is currently taking refuge. A day later, on April 28, Vishnu’s elder brother Sadhu was picked up as well, in an identical fashion.

This sudden turn of events came soon after the C-60 commandos had gunned down two alleged rebels of the banned Communist Party of India (Maoist), identified as Kamala Narote alias Ramko and Shilpa Durva. Ramko, who is believe to be in her early 40s, was said to be the divisional committee (DVC) member of the banned organisation and Durva, in her mid 20s, was a Dalam member. Police claim that to avenge Ramko’s death, the Naxals – led by her husband Bhaskar Hichami – had planned and executed the May 1 attack that killed 15 Quick Response Team (QRT) commandos.

According to the villagers – whose version is corroborated by the Gadchiroli police – Ramko and Durva had visited the neighbouring Poyorkoti village in the early hours of April 27. While they were on their way, walking through the dense forest between Poyorkoti and Gundarwahi village, they were apprehended by the police.

Chhaya says her husband, a farmer, was travelling on his motorbike on the same route as the Naxal leaders when he was stopped by one of them. The leaders asked him to drop them a few kilometres into the forest. “My husband had only obliged then,” she told this reporter. According to her version, Vishnu is unrelated to the Naxals and has been wrongly picked up.

In the dense forest of Gadchiroli’s Bhamragad taluka, where even basic amenities are completely missing and there is no public transport, villagers have no option but to walk for kilometres on end. When a motorbike passes, walkers immediately seek help. “There was nothing unusual in the demand for a free bike ride. My husband must have mistaken them for locals and so agreed to drop them. But the police apprehended him, along with the two women. He has not returned home ever since,” narrates Chhaya as her eyes wells up.

Along with the Lekami brothers, villagers told The Wire that another villager, 50-year-old Jalli Pitru Podadi, has also been kept in illegal detention by the police. The Wire was unable to locate Podadi’s family members in the village and hence could not independently verify this claim.

Since Lekamis’ detention, the police have visited their house in Gundurwahi village several times. “They first came twice to take us away with them to the police station. Later, on my release, the police once again visited to take the motorbike,” she says.

The three villages of Poyarkoti, Gundurvahi and Markanar are just a few kilometres apart. These hamlets, with around 30-35 houses in each – all belonging to members of the Madiya tribe – are situated in the district’s border taluka, Bhamragad. On one side is Chhattisgarh’s magnificent Abujmarh – which means “the unknown hills” in Gondi – and on the other side are tall palm trees. Small rivers cut through these villages, and one has to cross them to travel from one village to another.

Gadchiroli, unlike other districts of the Vidarbha region in Maharashtra, receives very heavy rainfall. These rivers overflow during the rainy season, rendering most villages in Bhamragad absolutely inaccessible. That inaccessibility, besides causing serious inconvenience to the villagers, also makes for a “safe haven” for Naxals who drop by occasionally – sometimes to buy groceries, for free meals with the locals or sometimes even to rest while recuperating from a serious illness.

In the wee hours of April 25, the villagers say, Ramko and Durva had been to Poyarkoti village for similar reasons. Dressed in simple sarees, the locals say, both women had stayed at the house of one of the villagers. “They came here late in the evening and asked for food. There is very little that villagers can do in such a situation. We were aware of their identity but couldn’t really do much, much less protest. We cooked some simple food for them, they stayed overnight and spent the day on April 26,” said the villager whose home they stayed in. On the night of April 26, the duo left, but returned the next morning.

“We cooked an early lunch, they ate till they were full and then walked towards Gundurwahi village,” the head of the family told The Wire. In less than 15 minutes, both women had been captured by the police and later killed. Sources in the state intelligence department have confirmed that the police have not pressed any charges against the Lekami brothers or any other person in the village. Chayya told The Wire that the family and a few others from the village had approached the nearby Koti outpost of the district police to enquire after Vishnu and Sadhu’s whereabouts. “The police claim they have been moved to the Gadchiroli police headquarters. We demanded an FIR copy, or at least evidence that my family members are alright. The police did not budge,” Chayya said.

This reporter reached out to the additional superintendent of Gadchiroli police, Mohit Garg, with a series of queries regarding the chain of events, the alleged illegal detention and other accusations levelled by the locals. Garg dodged all the questions and instead spoke for over six minutes on the phone about the killing of 15 commandos by the Naxals in an ambush on May 1.

He refused to say much more, adding that he does not speak to journalists he is not familiar with. The superintendent of police, Shailesh Balkawade, and the Gadchiroli police’s public relations office too refused to answer calls and follow-up messages.

They were unarmed, yet gunned down

Ramko and Durva were not unknown to the villagers. “They would come to the village occasionally. Each time they visited, they came unarmed,” said locals. They would talk to a few trusted people in the village, and then quietly leave. In the recent meetings, they had suggested “we unify and take charge of tendu leaf sales in the coming season (which starts mid May),” a villager shared.

Villagers say the rebels had no weapons, were dressed in sarees and were carrying groceries with them. “Then why were they killed? Why not arrested?” asks one person from Gundurwahi, who had been to the nearby lake to fish when the police had apprehended the two. He claims to have seen police movement in the village and later the capturing of Ramko and Durva.

Just Rs 7 per day from readers like you will keep The Wire going. Click here for more details.

The police version, however, is entirely different. According to the police, the Naxal women leaders had been planning revenge for the April 22, 2018 violence in which 40 persons, including several crucial Naxal leaders, were gunned down.

Ramko was made a DVC member last year, soon after her predecessor, 32-year-old Dolesh alias Sainath Ataram, was killed in that gun battle. While the police had confirmed that three of those killed, including Sainath, were influential Naxals, several persons including eight children were also among the people killed in the attack.

The state was offering hefty prize money for Ramko – Rs 16 lakh. She was married to another DVC member, Hichami, who the police claim was the mastermind behind the May 1 attack on the QRT commandos. Soon after the May 1 attack, several banners were put up by the Naxals overnight, across several villages, suggesting they had planned the attack as revenge for Ramko’s death.

According to the police, Hichami, her longtime partner and DVC member from North Gadchiroli, had allegedly planned “call ambushes” (create an incident and then plot an ambush) at four different spots. Of them, the police claim he succeeded in one to inflict extreme damage to the security forces, killing 15 QRT personnel and their civilian driver near Jambhur Kheda village in Kurkheda. The Gadchiroli police have name Hichami as the prime accused, along with 39 other CPI (Maoist) members.

In a letter released soon after the attack, which The Wire is in possession of, the Naxals have sought an independent inquiry into Ramko’s murder. They, like the villagers, have claimed that the police killed her and Durva in a staged encounter.

“C- 60 commandos cooked a false encounter story and released it (to the media) … C-60 men inhumanly tortured them and assassinated them within 2-3 hours only. Please arrange for a fact- finding team with rights activists to know the facts from the village,” the letter states.

With their deaths, the villagers now feel more blood will be spilled on both sides. The police are suspicious of the villagers for “giving shelter” to the Naxals, and the Naxals are in search of the informer who may have tipped of the police about Ramko and Durva’s movement.

“And in that it would be us – the Adivasis – who will end up as collateral damage either way,” feels Peka Madi Pungati, a resident of Markanar village, summing up the precarity of life in the jungles of Dandakaranya.