From Gujarat to Tamil Nadu, Students Protest Against Attack on JNU

They condemned the attack on students and faculty members and demanded swift action against the perpetrators. 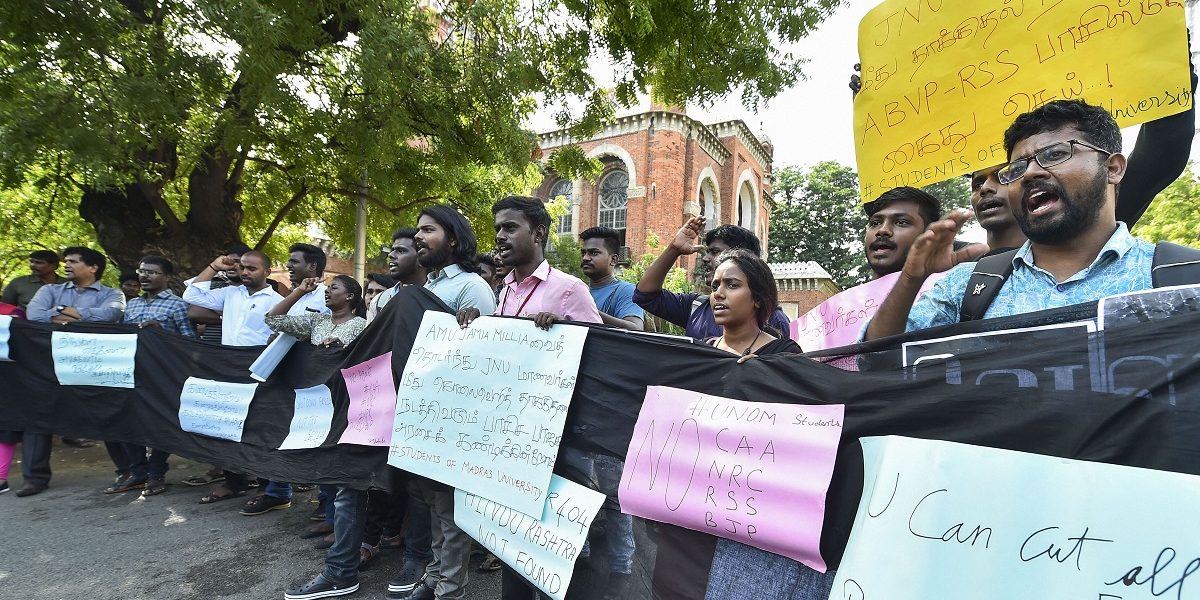 New Delhi: Over 100 college students, activists, and citizens on Monday evening held a peaceful protest outside the Indian Institute of Management Ahmedabad (IIMA) to denounce the violence at the JNU campus in New Delhi.

“We are against the brutality with which students are being treated. We also put tape on our mouth today to convey the message that people are not being allowed to speak freely. Students are being labelled for asking questions. Concerned citizens gathered on their own to register their protest” said Sarthak Bagchi, an assistant professor with the Ahmedabad University.

Vadgam MLA Jignesh Mevani was among the protestors and demanded stern action against those involved in the attack on JNU students and teachers.

“The attack proved that miscreants have been given a free hand. They knew that the police and government belonged to them. I am confident these miscreants were sent by home minister Amit Shah. No one else except the RSS and the ABVP can do such things,” claimed Mevani.

Also read: Over 8,500 Signatories Accuse JNU Admin of Being ‘Complicit’ in January 5 Attack

The protestors, surrounded by a large posse of police personnel, were holding banners with slogans like “JNU is Bleeding”, “Stop Brahminical Terrorism”, “Save JNU”, “With JNU – Against Fascism”, “We Stand with JNU”, “Stop Turning Campuses into War zones” and “Save Students-Save Democracy”.

While some students of the Gujarat Vidyapith, founded by Mahatma Gandhi, weaved khadi on their charkha as a mark of protest, other agitators chanted Faiz Ahmed Faiz’s famous poem ‘Hum dekhenge‘ which was the centre of a controversy recently at the Indian Institute of Technology in Kanpur.

“The attack on students inside JNU shows the present government does not like people who do not agree with its policies. But, we all want to tell the students of JNU that the entire country is with them. This is an attack on the soul of this country. We are the future of this country. Why are we being treated like enemies?” asked student agitators. 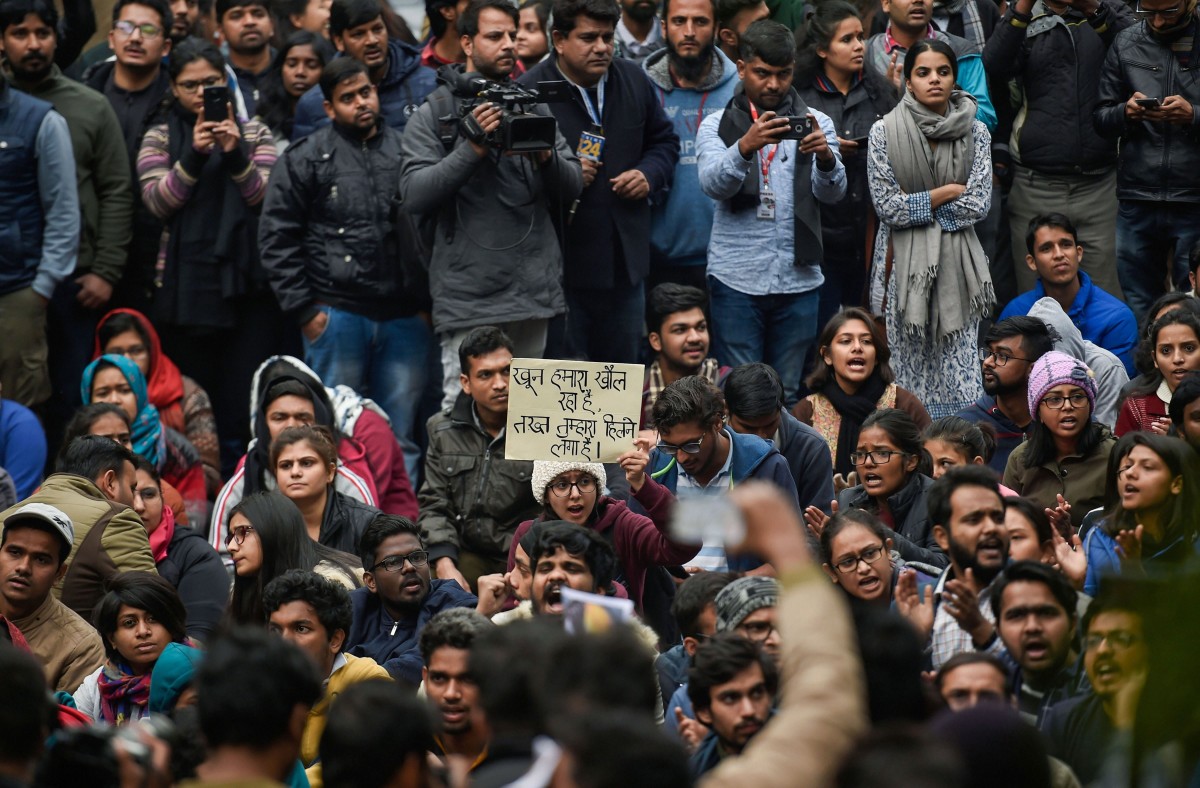 When the protest was on, some persons claiming to be associated with the ABVP gathered on the opposite side of the road and displayed banners alleging the JNU attack was planned and executed by ‘Left-wing’ students.

“These youths did not have any permission to hold protest here. Thus, as a precautionary measure, we detained four ABVP members. We will release them later,” said Vyas.

On Sunday night, masked men armed with sticks and rods attacked students and teachers on the JNU campus and damaged property. At least 28 people, including JNU Students’ Union president Aishe Ghosh, were injured.

In Delhi, the students and teachers of St Stephen’s College also expressed concern on Monday over the recent incidents of violence in JNU, Jamia Millia Islamia and Aligarh Muslim University.

They gathered at the college to plan a “long-term” resistance to the amended citizenship law.

The gathering condemned the incidents of violence reported from various universities in the country and called for a students’ movement against the current BJP-led government.

Protests were also held in parts of Tamil Nadu, where students and workers’ unions held protests on Monday against the violence at JNU. Holding placards, a section of students of the University of Madras staged a demonstration near the varsity entrance. They also raised slogans against the contentious Citizenship (Amendment) Act (CAA) and the proposed National Register of Citizens (NRC).

DMK MP Kanimozhi met the students and offered her party’s support to the protest.

“Attack on students is something like an attack on democracy. This should not continue,” she told reporters.

Later in the evening, members of multiple student welfare organisations along with Confederation of Central Government Employees and Workers Union took part in a candlelight vigil near Valluvar Kottam here to protest the violence at Jawaharlal Nehru University (JNU).

About 200 people participated in the vigil and raised slogans. Many held placards that read “Pens are not Lathis” and “We Stand with JNU”.

Police were deployed in large numbers at the venue to prevent any untoward incident.

Students of a government college in Thanjavur also staged a protest and demanded a ban on ABVP and its parent organisation RSS.