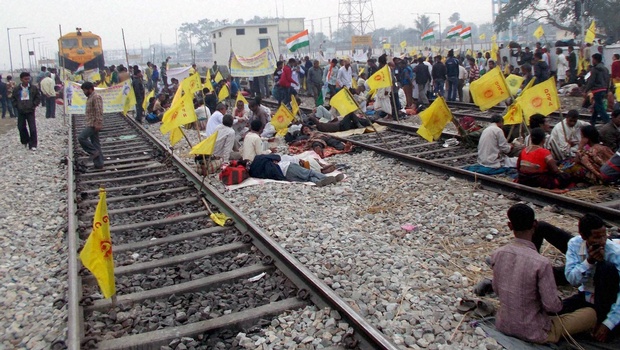 Dalits plan to stop railways in Gujarat on October 1

Dalits in Gujarat announced a ‘rail roko’ strike for October 1, the New Indian Express reported. Dalits have been organising and agitating in Gujarat ever since the Una incident.

“To highlight the issue of atrocities on Dalits in the state, we have called for a ‘rail roko’ protest on October 1 at some places in Gujarat. We have also urged Dalit leaders in other parts of country to engage in similar kind of protest on that day,” leaders of the ‘Una Dalit Atyachar Ladat Samiti’ and ‘Rashtriya Dalit Adhikar Manch’ said.

A spokesperson for the movement said that the agitation was meant to protest the discriminatory practices against Dalits, in addition to adivasis, OBCs and farmers.

The Indian Express has reported in detail about a village in Tamil Nadu where the entire population is charged with sedition for protesting against a nuclear power plant.

More than 140 cases of sedition remain in place against the villagers protesting against the Kudankulam Nuclear Power Plant, even as the Supreme Court, on September 5, declared that criticism of the government does not count as sedition. Since 2011, 8,956 people of Idinthakarai have been booked under section 124A of the IPC.

Those accused, as well as the police, do not expect the cases of sedition to add up to much. In fact, as the Indian Express reported, the police have admitted that these cases are slapped to “scare people.”

According to the report, UP registered as many as 47,000 incidents for that year, a number exponentially higher than Haryana, which comes second on the list with 9,440 cases of violations.

Madhu, a 16-year-old refugee who fled Pakistan two years ago, was denied admission is a Delhi school, according to a report by India Today.

The school has reportedly claimed Madhu did not have the requisite documents. Being unable to produce the documents, Madhu, who hails from Sindh, has written to Delhi chief minister Arvind Kejriwal and is awaiting a reply. She has also written to the MHRD and the All India Parents’ Association.

Do you know of any other incident we should highlight in this column? Write to me at titash@thewire.in.