The 'Freedom of the Net', an annual report that analyses the state of human rights in the digital sphere, found plenty to object to in the Indian context.

New Delhi: “Where democratic checks and balances are lacking, government officials will exploit regulation to punish any company that moderates politicians’ speech, or pushes back against arbitrary orders to remove content or hand over data.”

These lines come from Freedom House’s latest edition of the ‘Freedom of the Net’ report and immediately precede a mention of the Indian government’s dealings with social media platform Twitter over the past year.

The report describes Indian officials as having “pressured” Twitter into removing commentary critical of itself, related to its handling of the COVID-19 crisis in the country. It also notes that the government made Twitter stop flagging “manipulated content shared by the ruling party” and makes a reference to Indian officials migrating to the Bangalore-based microblogging site Koo as an alternative to the American-owned Twitter.

The ‘Freedom of the Net’ report is an annual analysis of the status of human rights on digital platforms. This year’s edition, the 11th of its kind, covers the period from June, 2020 to May, 2021 and accounts for 88% of global internet users in its assessment of 70 countries.

In addition to its overarching findings that global internet freedom has declined for the 11th consecutive year, the report levies criticism at the Modi government vis-a-vis digital regulation on several accounts, including the new IT Rules and the continued, arbitrary shutdown of the Internet.

State regulation of the digital market

The report details a global trend in which governments, under the guise of securing greater rights for users and mitigating the effects of harmful online behaviour (such as harassment, extremism and fraud), impose state and political responsibilities on tech companies.

In the same section, the report notes the Indian government’s clashes with Twitter in which the government, according to the report, pressured the social media company into removing content critical of it and prevented it from flagging manipulated content posted by the ruling party.

The report thus details the worst-case scenario: “…if placed in the hands of the state, the ability to censor, surveil, and manipulate people en masse can facilitate large-scale political corruption, subversion of the democratic process and repression of political opponents and marginalised populations.”

Problems with the new IT laws

The report describes India’s new Information Technology (Intermediary Guidelines and Digital Media Ethics Code) Rules as one of the “most comprehensive initiatives during this report’s coverage period.”

It details the rules’ mandates for a grievance redressal mechanism, deployment of AI-based moderation tools and appointments of three new local officers, including a chief compliance officer, under a section titled ‘Problematic obligations to remove content’.

While acknowledging the improvements the rules bring to content moderation by platforms through the requirement of significant social media intermediaries (companies with at least five million users) to notify users when their posts are removed, provide a clear reason and also an avenue for appeal, it goes into its limitations in greater detail.

It notes that the expanded obligations of these social media intermediaries, in conjunction with the need for local representatives and the risk of criminal liability, “will curb companies’ willingness to push back against state censorship requests that do not meet international human rights standards.”

It also calls the rules’ banning of content that goes against the sovereignty and integrity of the nation or public order as “vaguely defined.”

The same section notes the friction between Twitter and the Union government during the farmers’ protests. Twitter had reversed its original decision to fully comply with the IT rules when the government asked it to take down posts by journalists and political opponents.

Consequently, Twitter faced police inquiries, threats that its employees would be charged with crimes and a visit to its offices, the report notes.

The report also pulls up the section of the IT rules which call for social media intermediaries to disclose the “first originator” of content on orders from the government in cases related to state sovereignty, public order and sexually explicit content. It notes that this measure would force companies to dismantle end-to-end encryption systems which they have put in place, “undermining the privacy and security protections on which users, companies, and governments have come to rely.” 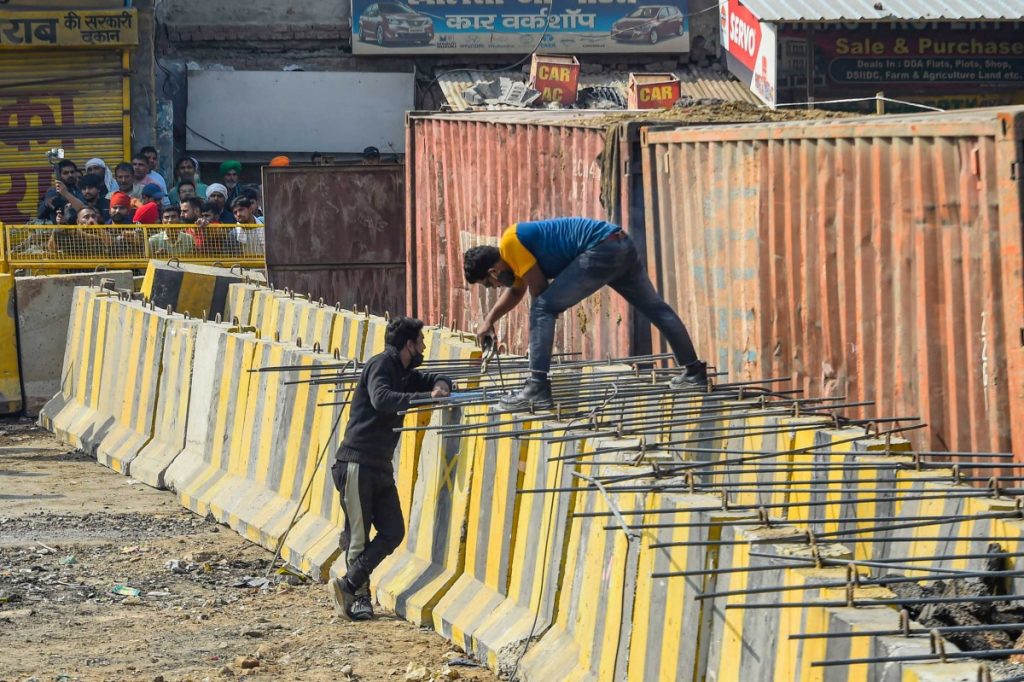 Barricades being set up by the police near the site of farmers ongoing protest against farm reform laws, at the Singhu border in New Delhi, Monday, February 1, 2021. Photo: PTI/Kamal Singh

In a section titled ‘Free expression in danger’, the report notes that India was among the 20 or so countries which shut off the Internet for a certain section of society this year. It made reference to the repeated internet cut-offs in Delhi in January and February of this year as the farmers’ protests against the three contentious farm bills kicked off.

“One shutdown in Delhi affected more than 50 million mobile subscribers,” the report notes.

In the same section, it goes on to recount how the Indian government blocked hundreds of Chinese mobile apps amid tensions between the armed forces of the two nations on the Line of Actual Control (LAC) in 2020. The report notes that this shows, “…how geopolitical tensions can erode free expression and access to information.”

The ambit of the report, however, extends far beyond India’s actions over the coverage period. It notes that China remained the “world’s worst abuser of internet freedom” due to authorities’ impositions of prison terms for online dissent. It also noted a decline in internet freedom in the United States for a fifth consecutive year amidst the deluge of fake and conspiracist content surrounding the 2020 presidential election and the consequent blocking of several of Donald Trump’s social media accounts.

It even included a section on the proliferation of spyware and surveillance technologies, noting that authorities of 45 of the 70 countries examined had been suspected of having access to sophisticated spyware, including the NSO Group’s Pegasus software among others such as Cellebrite, Circles, and FinFisher.