While the devastating impact of the second wave of the pandemic on public health in India is well-known, there is relatively little evidence on its economic and psychological dimensions. A phone survey sheds some light. 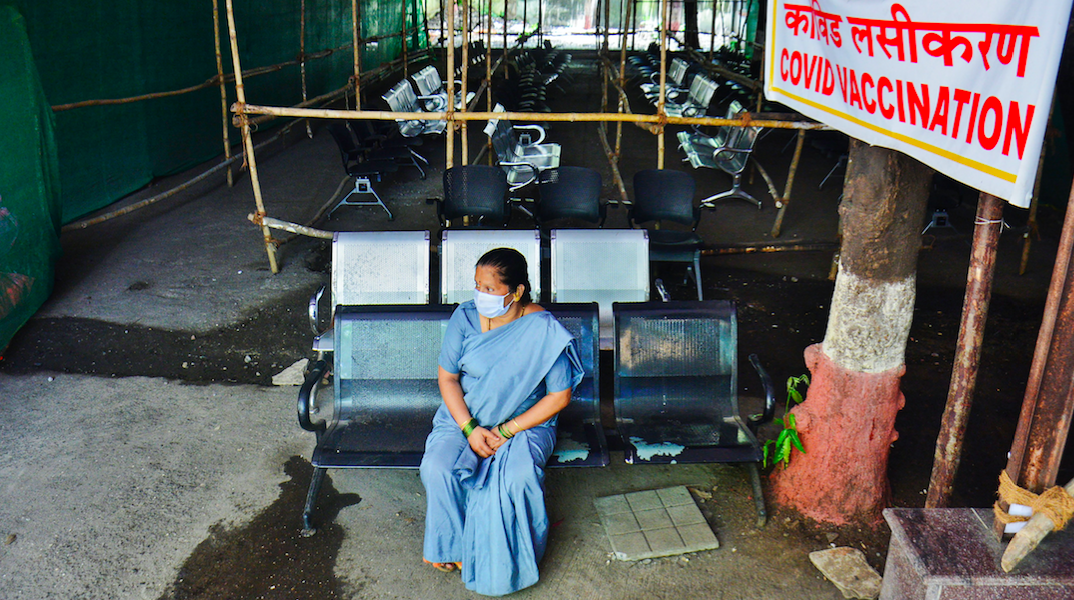 In two previous posts (here and here), we reported findings of follow-up phone surveys – from a Delhi-based survey of primarily informal-sector workers that began in May 2019 – conducted during the nationwide Covid-19 lockdown (announced on March 24), between April 3 and May 2, 2020.

The survey was conducted with a random sample, consisting of low-income families in industrial areas, of over 3,000 men and women residing in about 1,500 households.

Since then, we have conducted two further rounds of surveys with these respondents: (i) August-October 2020 (a phone survey after the nationwide lockdown was relaxed) and (ii) April-June 2021 (during the recent second wave of the pandemic and accompanying localised lockdowns).

Forty-three per cent of the last survey round was conducted in-person until mid-April 2021, after which we switched to using a phone survey as curfew was imposed in Delhi on April 19, 2021. Despite the circumstances, our re-interview rate has been high – over 92% of the baseline respondents have been surveyed in all phases – except during the nationwide lockdown in the first wave, during which we were able to reconnect with 88% of the baseline households.

Our study gives us a unique perspective into the dynamic effects of the pandemic on poor and informal sector workers, who constitute one of the most vulnerable sections of our population. In addition, since we conducted a matched husband-wife survey, we are able to document the experiences of both women and men during the Covid-19 crisis, within the same households. In particular, we examine the relative impact of the various phases of the pandemic over the past two years, on the earnings, incomes, and mental health of our respondents – and how the experiences of women and men compare at a certain point of time and over time.

Livelihoods: How have unemployment and earnings fared over the past two years?

The nationwide lockdown in 2020 was a massive shock to the livelihoods and wage earnings of these families (Figure 1). As expected, the vast majority of male workers in these residential areas were completely unable to work.

Consistently, around 85% of the male respondents did not earn any income from their main occupation. This situation eased over time, as the responses post-lockdown in 2020 suggest, with the relaxing of some restrictions, suggesting that many of these job losses were temporary. However, the recovery was not complete – employment levels did not return to the pre-pandemic levels of 2019. Seventy-seven per cent of male respondents report working after the Covid-19 first wave lockdown, 14 percentage points (pp) lower than in 2019. The second wave of the pandemic in 2021 again reduced employment but due to the localised nature of the lockdown and its lower stringency, its implications for employment and earnings are not as adverse as during the 2020 lockdown. Men’s employment fell by 17 pp in 2021 as against 85 pp in the previous survey round in 2020.

However, the recovery in the period after the first wave, to the pre-pandemic levels, has reversed to some degree.

We should, however, be cognisant of the fact that uncertainty was much higher during the national lockdown in 2020 as workers were unsure of whether their job losses were permanent or temporary. In the second wave of the pandemic, not only were lockdowns more localised and less stringent, they were also largely expected to be temporary. These factors could have exacerbated the differential impact of the two waves on reported working status. Consequently, the reported loss of monthly earnings is also lower in the second wave of the pandemic – Rs 1,300 rupees compared to over Rs. 10,000 in the first lockdown (Figure 3). But the gap in earnings between the pre- and pandemic period has worsened, on account of the second wave. In contrast to men, whose current working status falls significantly, women’s employment remains stable during the period between the two waves and the second wave of the pandemic, at approximately 11%-13% (Figure 4). Similar to men, women’s employment levels do not return to the pre-Covid level of 21% – remaining 10 pp lower after the Covid-19 first wave, and 8 pp during the second wave. 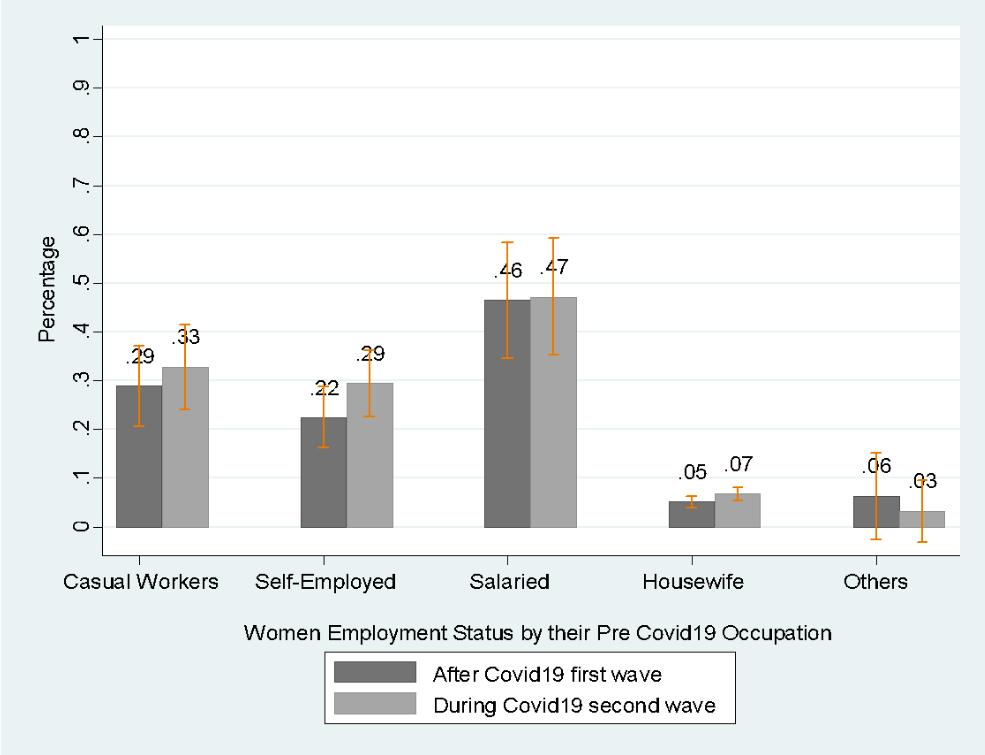 Consequently, there is a small and statistically insignificant increase in women’s monthly earnings between the last two survey rounds, although it remains low relative to their earnings reported in 2019 (Figure 6).

As a result, the gender gap in working status has shrunk – from 70 pp in the pre-Covid period to 47 pp during the second wave of the pandemic. This suggests that some women were compelled to enter the labour market or continue working under the adverse conditions between these two waves, while men lost jobs. Consequently, the average earnings gap (unconditional on working) also declines by almost Rs. 4,000 – from Rs. 10,256 in the pre-Covid period to Rs. 6,048 during the second wave. These results line up with literature on the countercyclical nature of women’s labour supply, and evidence on women’s participation in MGNREGA (Mahatma Gandhi National Rural Employment Guarantee Act) in rural areas during the first wave of the pandemic.

Also read: A Phone Survey Reveals How the COVID-19 Crisis Has Affected the Urban Poor

Mental health: Has psychological stress worsened or improved since the pandemic began?

Since the first wave of the pandemic in April 2020, we have documented high levels of psychological stress among our respondents – an often-neglected aspect of the ongoing crisis. We continued to ask our respondents about their emotional status in the four rounds of the survey.

Financial insecurity was the most important source of stress for men at the beginning of the pandemic and continues to dominate over the last year (Figure 7). However, health concerns are now at par with financial concerns in the second wave – 93% of respondents reported health concerns, which is an increase of 9 pp from the 84% reported during the first wave. Hence, while financial concerns remain, health worries have heightened as the pandemic has progressed. We attribute this to the devastating second wave that saw India (and Delhi in particular) record consistently high daily figures of Covid-19 infections and deaths for weeks, due to the highly infectious Delta variant of the Virus, accompanied by the collapse of the healthcare system. Not surprisingly, we also observe a significant increase in depression and anxiety, while reported sleep disorders remain more or less the same. We observe similar responses by women (see Figure 8 below) – high financial stress accompanied by an increase in health stress, anxiety, and depression. Unlike men, however, women also report an increase in sleep disorders from 49% during the first wave, to 53% during the second wave. In each survey wave, women’s mental well-being is significantly worse than men’s, with more women reporting emotional concerns than men. This gender gap has increased for depression and sleep disorders, significantly for the latter.

Our surveys document the changes in the economic and psychological well-being of some of the most vulnerable sections of Indian society. We find that the economic shock during the recent devastating second wave of the pandemic, is not as high as during the national lockdown of 2020. However, the labour market is yet to recover to its pre-pandemic levels, suggesting concerns about the longer term impacts on poverty and vulnerability as the pandemic rages on. Recovery has stalled – if not reversed – and significant, urgent public transfers are needed to stem the slide further.

Even though the economic shock has been lower in the second wave, its psychological toll has been higher than at the beginning of the pandemic, particularly as health concerns have been heightened. The adverse effect on emotional well-being has not only persisted and remained high over the past year but appears to be worsening – potentially impacting the long-run productivity of these workers, slowing economic recovery further.