The FIR is based on the complaint of Sanjay Bansal, brother of VHP leader and Ram temple trust member Champat Rai. 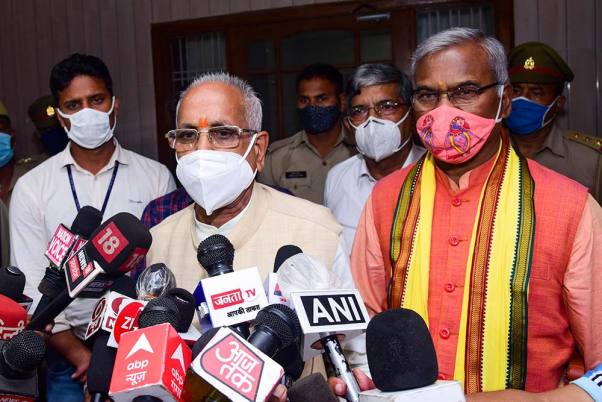 New Delhi: The Uttar Pradesh police have filed a case against senior journalist Vineet Narain and two others who have accused Ram Temple Trust member Champat Rai of doing nothing to help a gaushala in Bijnor recover land grabbed from it by a local land mafia with alleged ties to his extended family.

Rai is general secretary of the Shri Ram Janmabhoomi Teerth Kshetra and a Vishwa Hindu Parishad leader. He is battling separate accusations of possible impropriety stemming from the trust’s recent purchase of land in Ayodhya at an apparently inflated price.

The FIR is based on the complaint of Sanjay Bansal, Rai’s brother.  Bansal claims that the Bijnor police had already given a “clean chit” to Rai and his brothers, yet people were still  alleging illegalities in a Facebook post.

The FIR lists 18 charges against the three accused, including Indian Penal Code sections relating to forgery, tresspass and promoting enmity and sections of the Information Technology Act.

In a Facebook post from three days ago, journalist Vineet Narain had said Rai had effectively facilitated land grab by his brothers in Bijnor. The brothers had grabbed 20,000 acres of land from a cow shelter owned by Alka Lahoti, Narain had alleged. Lahoti is also named in the FIR, as is someone named Rajnish.

According to Narain’s post, Lahoti had been trying to removed the “encroachers” from her land for some time and had even appealed to Uttar Pradesh chief minister Yogi Adityanath for his help.

Bansal, in his complaint, says that he called Narain to try and clear up the matter. “However, a man calling himself Rajnish picked up the phone, misbehaved with me and threatened to kill me,” NDTV quotes his complaint as saying.

Dharm Vir Singh, the Bijnor police chief, posted a video statement on Twitter backing Bansal’s version of events. “The local police are investigating. Mr Champat Rai is a senior leader of the VHP and a member of the Ram Temple Trust and the accusations against him by the accused are baseless and prima facie the accusations against his relatives are baseless too. We are ascertaining all the facts,” Singh said.

However, Narain says the facts of the land grab are established by records in Lahoti possession.

The trust general secretary was recently accused by AAP MP Sanjay Singh and other opposition leaders of buying some land for then Ram temple premises in Ayodhya at an inflated price, but Rai has denied those allegations.