Can the Farmers’ Protest Be the Beacon for Consolidation of the Polity?

The polarisation caused by traditional bases of political and electoral mobilisation means that new methods are required. The farmers' protest has transcended these divisions. 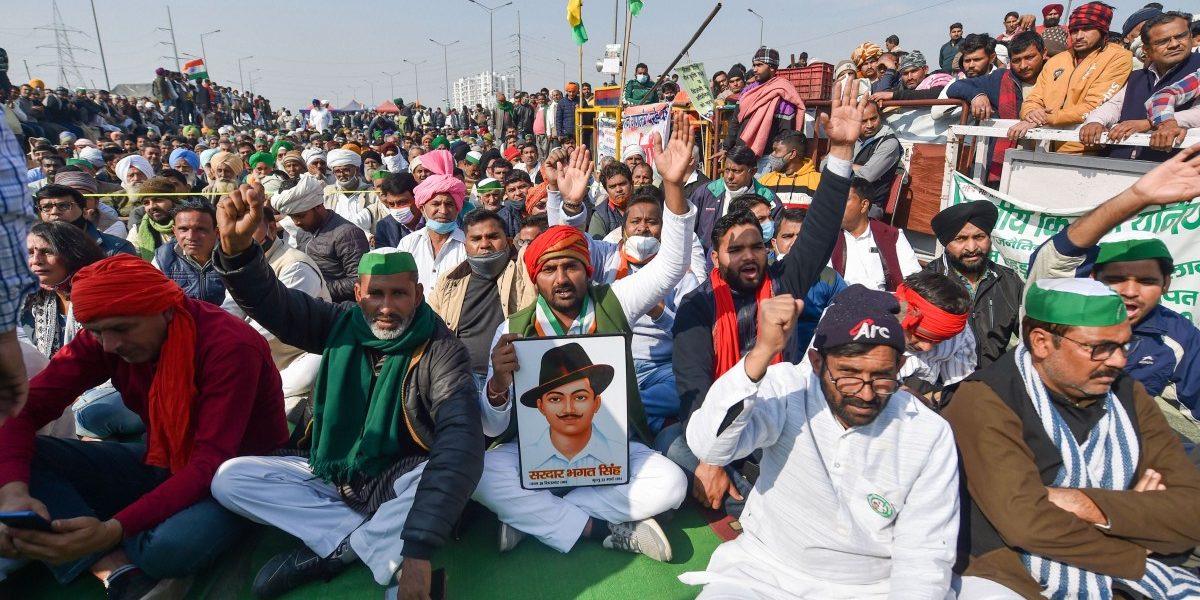 “See the chronology – First only the Muslims became anti-national/terrorist, then Tribals/Dalits/Backward Classes, then unemployed youth, and now farmers!”

As will be evident to most readers, the above lines have been adapted from, and inspired by, a poem titled ‘First They Came‘ written by a German bishop, Martin Niemöller (1892-1984), after a meeting with Adolf Hitler in early 1934. Niemöller had been a supporter of the Third Reich but was disillusioned by the 1934 meeting.

What has commonly been referred to as the farmers’ movement seems to have taken a very tricky turn after January 26, when there were some disturbances during the tractor parade. The movement seemed to be on the decline but took another twist on the evening of January 28, when one of the leaders of the farmers broke into tears live on TV, while being watched by thousands of people, including many farmers. Numbers of the farmers swelled at all the locations on the borders of the capital. After what may be called ‘minor skirmishes‘, things seem to be moving towards a dangerous confrontation.

Over the last few years, there have been several groups who seem to have felt a strong sense of discrimination and alienation. These include rationalists, Dalits, journalists, Muslims, farmers, among others. Some members of these groups have also lost their lives in various ways, including assassination. The on-going struggle that farmers are having with the government is the latest link in this chain.

The current stand-off has its origin in an ordinance promulgated by the Union cabinet on June 5, 2020, titled The Farmers (Empowerment and Protection) Agreement on Price Assurance and Farm Services Ordinance, 2020. Demonstrations and protests started in villages of Punjab and Haryana soon after. That can be called the first phase of this movement. The start of its second phase was around November 25, when thousands of farmers from Punjab and Haryana responded to a ‘Dilli Chalo’ protest called by various farmers’ unions for November 26 and 27. When they tried to enter Delhi, they were forcibly stopped at the Haryana-Delhi border by using tear gas and water cannons, digging up roads, and using layers of barricades and sand barriers. There were several injuries.

In the meanwhile, a mass general strike was held across the country on November 26, 2020, by 10 trade unions. Though this strike had been called earlier, workers made it clear that they supported the farmers.

Eleven rounds of talks were held between the farmers’ representatives and three government ministers. The last was held on January 22, 2021, but no agreement was arrived at. By then, the farmers had decided to hold a tractor parade, parallel to the traditional Republic Day parade on January 26.

The tractor parade was indeed held but matters got out of hand at a couple of locations, while the parade went off peacefully at many other locations. The disturbances at least two locations were severe. At one location, a young farmer lost his life, and at the other a large number of people almost took over a monument of historical importance, leading to accusations of desecrating a national monument and disrespecting the national flag.

This was the beginning of the third phase of this movement, which seemed very short, till only January 28. That is when a leader of the farmers burst into tears in full public view, which seemed to give the movement a second wind. 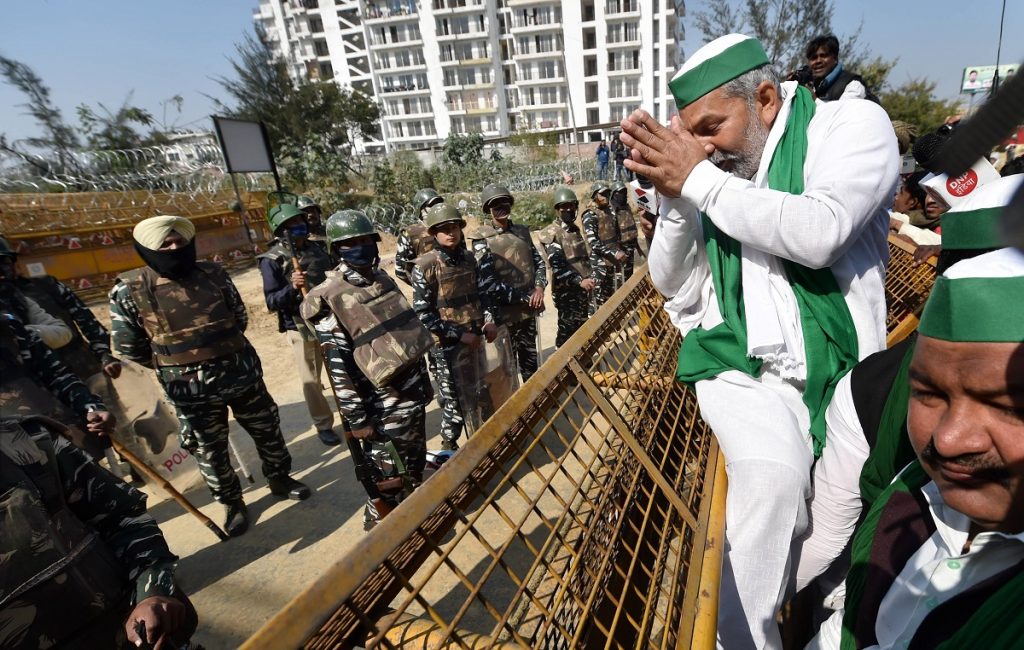 The situation, at the time of writing, is very fluid. While the security forces are building ‘fortifications’ around all the locations where the farmers are holding their sit-ins, the farmers seem determined to not give-in.

Where are we today?

What does all of the above amount to? While the ‘unity in diversity’ of India has long been celebrated, it also has a long history of differentiation, discrimination and polarisation. The British are famously said to be experts at the ‘divide and rule’ policy. But long before that, we had our caste system which was supposedly an ‘occupational categorisation’ but became a pervasive social feature. In the initial years of independence, caste seemed to be losing its influence because the newly adopted constitution provided for equality for all.

The respite from caste was short-lived till the political establishment discovered that caste can be used very effectively as a tool for political mobilisation.

Independence was accompanied by the partition and therefore polarisation based on religion already existed, to which caste was added as another element on which the population or the society could be polarised. Search and adoption of newer categories which can be used to polarise people further has continued. Some of these are identified in the quotes at the beginning of this piece.

This continued polarisation has resulted in extreme fragmentation of the polity, and this has its direct reflection in the political set up in the country. The polarisation supported by some ingenious devices such as the electoral bonds has made the political and electoral fields totally lop-sided. The potential of electoral bonds to “choke the flow of funds to all opposition parties” was pointed out early on, and was later confirmed.

This combination of polarisation and money power has proved to be extremely effective for electoral success, but is not good for democracy. There is more to democracy than elections. Elections are necessary but not sufficient for the functioning of an effective democracy. This success can only be challenged by some sort of consolidation of the polity.

The farmers’ movement has the potential of being a beacon to bring about this consolidation. As events have unfolded, this movement started in Punjab, and was led by farmers from the state. By the time it reached the borders of Delhi, farmers from Haryana had become an integral part of the movement. This saw overcoming, at least temporarily, the differences, often competitive, between Haryanvis and Punjabis, and also between Hindus and Sikhs.

As it spread, farmers from UP joined in large numbers. What is critical to note is that this conglomeration of farmers overlooked, or rose above, caste differences, and when Muslims from various parts of UP came to Ghazipur, the movement transcended religious differences too.

This opens up further possibilities. What if all, or some, of the categories mentioned in the beginning of this piece were to come together? This will be a kind of consolidation based on some form(s) of deprivation. A combination of Dalits, OBCs, Muslims, farmers, workers, for example, may well be a natural grouping based on their status in society. An implication of this is that the traditional bases of political and electoral mobilisation and consolidation are no longer appropriate because the rapid changes that the world has gone through in the last couple of decades have altered people’s preferences and aspirations in very significant ways.

A conglomerate of Dalits, OBCs, Muslims, farmers, workers may well sound a pipe dream, because these are very disparate groups, with most of them in flux. But this conglomeration could be realised because, to paraphrase a saying coined by the ancient Greek physician Hippocrates, “Desperate times call for desperate measures.”

So, if we want India to be a functioning and effective democracy, not only an artefact created by the mechanism of elections, perhaps it is time that the “demos” took charge of “cracy”. Perhaps what has been happening in India over the past few years has actually been a plaintive and desperate cry by democracy to “We, the People”, in the words of the famous Urdu poet, Mirza Ghalib:

I agree that you will not betray me but
I will be reduced to ashes by the time you get to know of my situation.”