The farmers say they are 'determined' to continue this protest 'despite being forced to remain on the streets' during a devastating second wave of the COVID-19 pandemic. 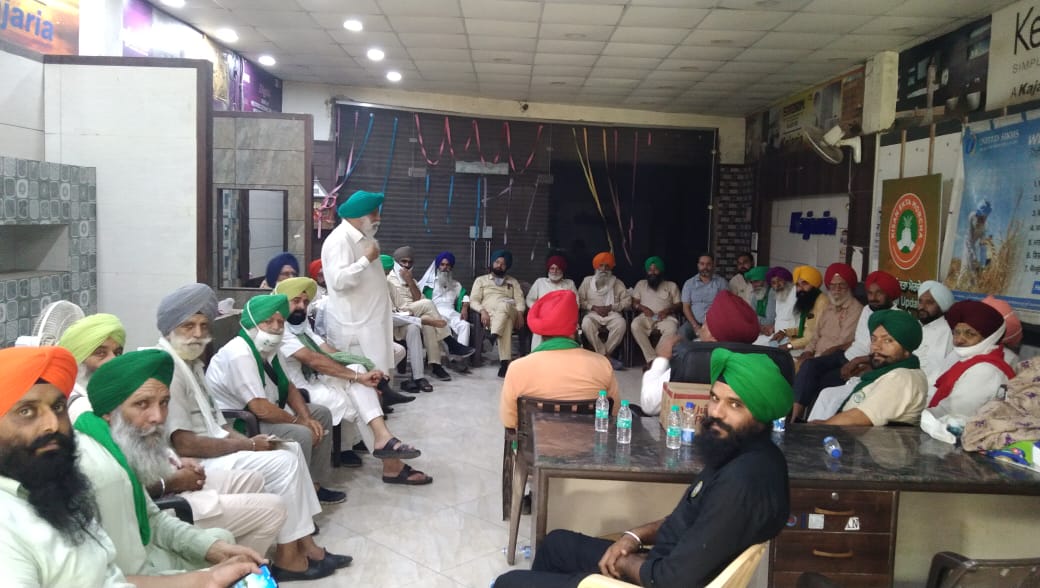 A photo taken during a meeting of farmers' leaders. Photo: Samyukt Kisan Morcha

Mohali: Wishing “good sense” to the Bharatiya Janata Party (BJP) government, farm leaders representing over 30 farmers’ organisations, under the banner of the Samyukt Kisan Morcha (SKM), have penned a letter to Prime Minister Narendra Modi and the Union Minister of Agriculture Narendra Tomar urging them to resume talks over the three contentious agri-marketing bills, which were suspended over four months ago on January 22, 2021.

Farmer organisations and the Union government have already had 11 rounds of inconclusive talks. Farmers’ unions demand a complete repeal of the three farm laws, a legal guarantee of minimum support price at C2+50%, and a roll-back of the proposed Electricity Bill 2020, whereas, the government believes the eight amendments offered in December last year is all they can offer.

According to the protesting farmers, the problems with the new farm laws are more fundamental and they believe that the amendments were mere tokenism on the part of the government. No discussion has also been initiated on the legal demand of the MSP or the proposed Electricity Bill. In the early days of heightened protests, the Supreme court also created a committee to resolve the matter. The committee was dissolved soon after it was formed, after one member resigned from it.

With a new virulent strain of the novel coronavirus causing havoc in the lives of the Indian public, the intensity of the large farmers’ protest at multiple borders of New Delhi decreased over time. This also coincided with the harvesting season when many farmers went back home in batches to sell their crops. However, at many places across Punjab, Haryana and Uttar Pradesh farmers’ leaders had been having regular gatherings.

With the protests nearing six months on May 26 – a day equally important for the Modi government as it completes seven years in office – the farmers have written to the government saying that they are “determined” to continue this protest “despite being forced to remain on the streets” during a devastating second wave of the COVID-19 pandemic. The letter further notes that farmers’ bodies are “deeply conscious of the risks of the pandemic” and do not want to expose the protesting farmers or anyone else to avoidable health hazards but “at the same time, farmers cannot give up on this struggle that is a matter of life and death for them and for their future generations.”

Farmers’ leaders note that the “onus” of resuming sincere talks lies with “the most powerful leader of the largest democratic nation in the world”.

In their letter, farmers’ organisations have also said that “they do not wish to distract the government at this juncture” with mounting COVID-19 cases. It further notes, “…if we do not have a constructive and positive response from your government by the 25th of this month, we shall be constrained to announce a further intensification of our struggle.”

So far, over 470 farmers have lost their lives at the protest sites. Some have succumbed to the COVID-19 infection as well. Last night, the protest sites were a pool of mud and water after heavy rains lashed the capital city of New Delhi.