As Prime Minister Narendra Modi announces that the three farm laws will be repealed, Rohit Kumar recounts one story of the farmers who are on protest. On November 19, nearly a year after the farmers’ protest began, Narendra Modi announced his government’s decision to repeal the three farm laws. As I watched the prime minister on TV, my mind went back to the scores of visits I have made to Delhi’s borders to document the stories of the farmers on protest, and as I did, one memory stood out above the rest. The memory of a winter’s night at Tikri border.

I still recall the trepidation I felt as I called Jasbir Kaur Natt to ask if I could stay over at the ‘Trolley Times’ tent. Jasbir Kaur (or Beeji as she is called) is a senior leader with the Punjab Kisan Union and has been helping to manage the Tirki protest site for a year now. She told me I was most welcome.

Her first question, “Kyaa khana chaahoge? (What would you like to eat?)” touched me and put my mind at ease. This was a lady with a mother’s heart. Moved by her warm hospitality, I told her I would happily eat whatever they were having.

Like many other makeshift bamboo and tarpaulin dwellings at Tikri, the ‘Trolley Times’ abode also occupies a bit of the road divider and a bit of the road. In this space is a small kitchen, two separate living quarters, a tiny storage area, and a small library called the ‘Shaheed Bhagat Singh Library’. A hanging plant gifted by a well-wisher has pride of place, as does a donated wooden bench that farmers rest on while on their way to and from the stage area, a kilometre away.

The dreaded Delhi smog was starting to set in as I reached Tikri. Sukhdarshan Natt, Beeji’s husband, a tall cheerful Sikh with a flowing grey beard greeted me with a hug and offered me a cup of tea.

As I settled in for the evening, I noticed a frail, elderly man lying on a cot covered by a mosquito tent. Attached to him were a drain bag and a catheter. This man’s name, I learned, was Harcharan Singh, a farm labourer who had been part of the Tikri protest site since November 2020. He had been hit by a speeding vehicle on Rohtak road a couple of months ago. It was an accident, and he had sustained injuries serious enough to warrant major surgery. 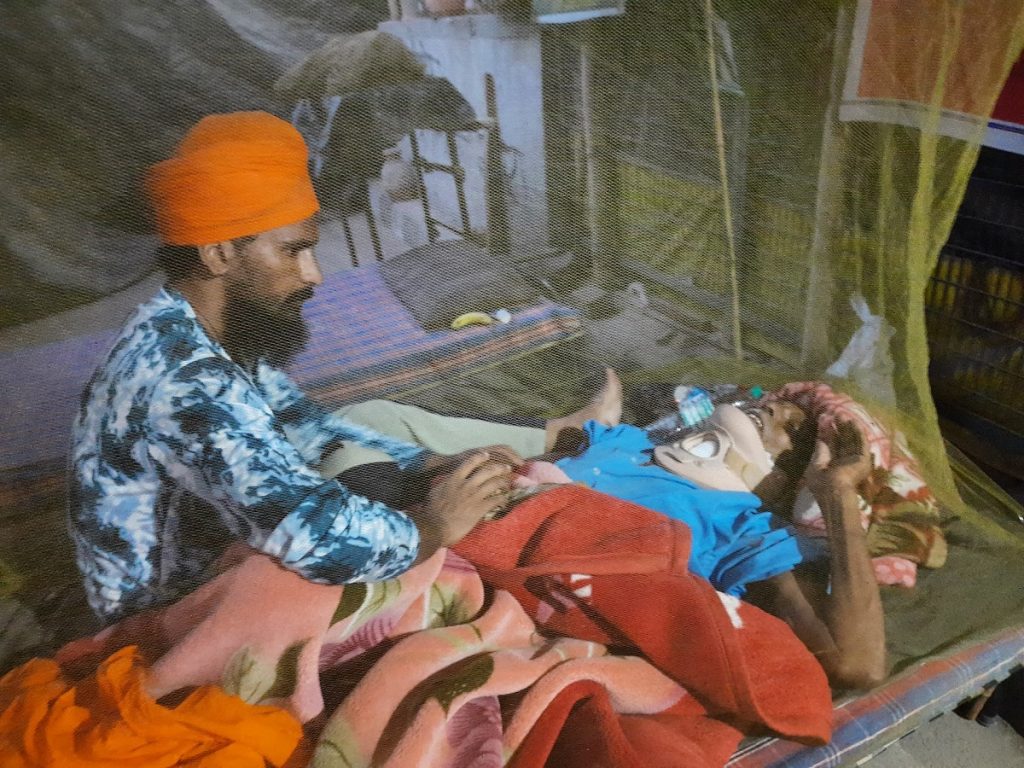 Because Harcharan Singh was in no condition to travel anywhere for the next couple of months and had nowhere else to stay, the Natts made space for him to stay in their shelter and recuperate. Barely conscious, he was being looked after by his son and the others at ‘Trolley Times’.

Beeji asked me if I minded sleeping on the cot next to Harcharan Singh. I told her I didn’t. Dinner that night consisted of bajre ki roti that she has made, and sarson ka saag that one of their comrades, Gurnam Singh, had brought back that day itself from his village. We sat together and ate on the road, in the little area that has been demarcated as the kitchen. 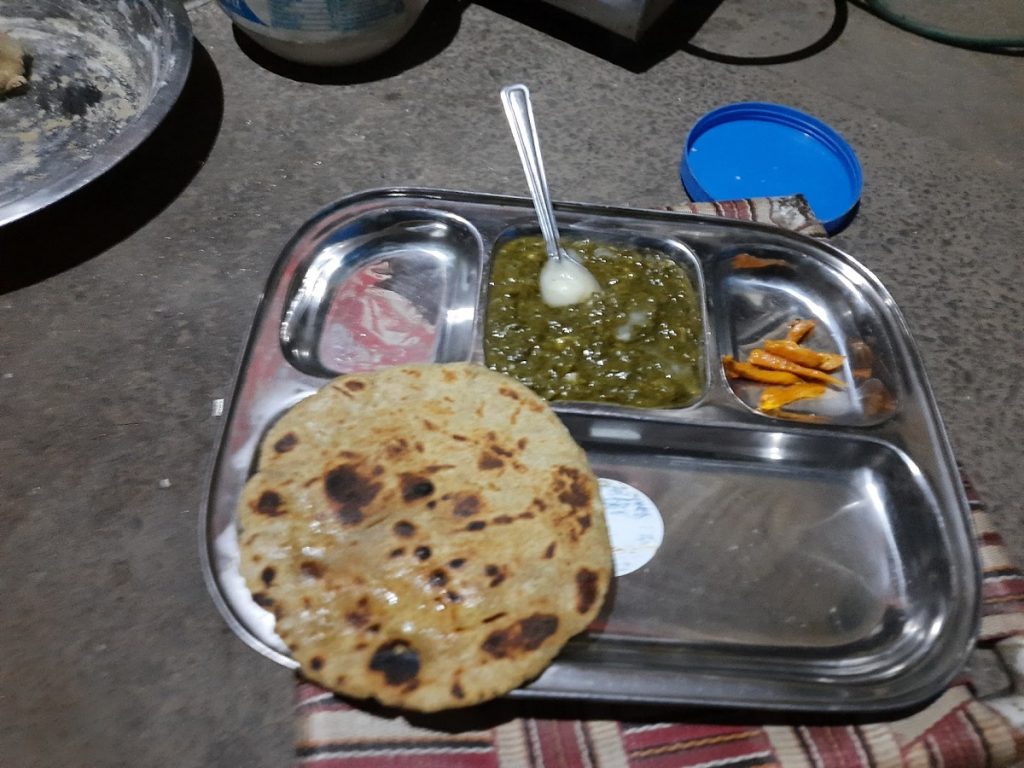 Every night at Tikri, there is a security meeting near the stage area. Sukhdarshanji invited me to attend the meeting that night. As a security committee of 40 or so farmers sat near the stage area discussing how to keep watch over the camp that night, Meet Mann, a farmer leader from Haryana who runs the main langar near the stage remarked wryly, “Chowkidaar hee chor nikla. Isliye humko apni chowkidaari khud karni padtee hai. (The chowkidar has turned out to be a thief. That’s why we have to be our own chowkidars.)”

A jeep from a nearby gurudwara pulled up in the middle of the meeting, and a young priest offered steaming hot tea to everyone present. One of the attendees, a senior Sikh gentleman laughed, “How can Modi stop us when so many people are standing with us? Someone brings us tea and someone else brings us food. This is a daily miracle. This is Baba Nanak’s langar. No one can stop us.”

The meeting dispersed and we headed back to our tents. Beeji and Natt sahab put up a mosquito net around my bed. A bit embarrassed by their hospitality, I thanked them again. They told me to please dispense with formalities and thank yous. I had brought my own sleeping bag along, but they give me a couple of spare blankets, just in case. I stretched out for the night, acutely aware that those around me had spent many many more nights there than I had.

Around midnight, a commotion broke out. Natt sahab jumped out of bed and ran out on the road. I followed him. The farmers’ security patrol had caught an arsonist trying to set fire to a tent barely 20 feet away! The person in question, a hired goon from outside, was hauled off by the farmers and handed over to the Haryana police post nearby. For the rest of the night, the patrolling was intensified.

It is well-nigh impossible to sleep by the side of a highway. Every 15 seconds or so, a truck roars past, its wheels thudding over large potholes. The sound it makes resembles a mini-explosion. I wrapped a scarf around my head to try and keep the noise out. It didn’t work. I finally fell asleep around 4 am, but was awakened before long by the sound of morning traffic.

Sukhdarshanji offered me a glass of warm water. “Drink this. It will keep you from getting a sore throat.” I asked him the question that had been burning in my head all night: “How do you find the strength to do this day after day and night after night??”

He thought for a bit and said, “When it is a matter of life and death for you and your people, the strength to carry on just comes.”

Gurnam Singh, a senior leader with the Punjab Kisan Union, and a resident in the same makeshift abode, added, “Strength comes from love, the love you have for others, for those who are suffering. If you have any other agenda, you will not have strength.”

As we sipped our morning tea, Natt sahab took me through the history of farmer movements in India. He is a well-read man, indeed, a veritable walking encyclopaedia.

“Do you know,” he asked, “Bhagat Singh and Rajguru were playful young men with a great sense of humour? They loved a good joke! People put them on a pedestal and give them god-like status, but it is important to remember they were ordinary people, just like us. And if normal people like them could lay down their lives for their country, then we, too, are without excuse.”

As I left Tikri later that morning and headed home, I thought about Natt sahab’s words and marvelled at the grace and grit with which the farmers were facing the hardships of life on the road. A couple of days later, I learned that Harcharan Singh who had had the neck surgery had passed away. Sad, but grateful that he had been treated with such dignity and care in his last days, I said a prayer for him, and for the nearly 700 others who have also died at the protest sites over the course of the past year.

The first thing I did after watching Modi declared his government’s intention to repeal the farm laws was to call Sukhdarshan Natt. He reciprocated my Gurpurab greetings and said, “We don’t get too overjoyed by good news or too depressed by bad news. This is a victory, yes, but our struggle will continue till minimum support price (MSP) has been made a legal right and justice has been delivered for all the farmers who have died during this protest. We are not finished here.”

It looks like there are many more nights of protest at Tikri Border still to come.