India's "rich and unique identity" needs to be safeguarded and celebrated, said leaders of various faiths at a seminar in Delhi. 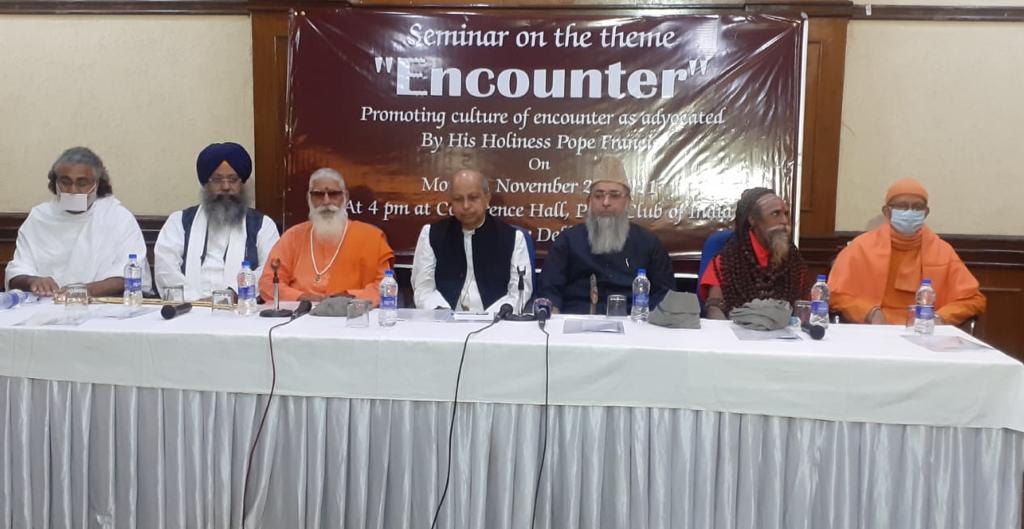 Leaders of various faiths at the Press Club of India, Delhi. Photo: By arrangement

The leaders were gathered at the Press Club of India on Monday for a seminar on religious diversity as India prepares to welcome Pope Francis. The head of the Catholic church was personally invited by Prime Minister Narendra Modi during his visit to the Vatican in October.

Had a very warm meeting with Pope Francis. I had the opportunity to discuss a wide range of issues with him and also invited him to visit India. @Pontifex pic.twitter.com/QP0If1uJAC

Christians are the third-largest religious group after Hindus and Muslims in India, comprising about 2.3% of the total population. The pope was supposed to visit India in 2017, but scheduling failures resulted in a cancellation.

Pope Francis has been the head of the Catholic church and sovereign of the Vatican City State since 2013.

Pope John Paul II was the last pope to have visited India, when he arrived in 1999 to issue a papal document on the Church in Asia.

Anil J. Couto, the archbishop of Delhi, along with several eminent religious heads of different faiths were present at the seminar. The theme for the seminar was “Encounter”, based on Pope Francis’s recommendation that an encounter should be seen “as a back and forth interaction between God and human beings”.

Couto, in his keynote address, said, “In India, a nation bestowed with diversity and plurality of religions and cultures, customs and traditions, ethnicities and heritages, we need to continue to safeguard and celebrate this rich and unique identity.” The gathering of leaders of different faiths has great significance to inter-faith harmony, for peace and progress of the nation, he added.

The national president of the Indian Parliament of Religions, Maharishi Bhrigu Pithadhishwar Goswami Sushil Ji Maharaj said that the PM’s invitation to Pope Francis is a welcome step.

“I hope the Pope visits our country as soon as possible. This reflects that the slogan of our prime minister, ‘sabka saath, sabka vikas and sabka vishwas’ is being put into practice. In effect this would send out a strong message down the line, especially to people at the grassroots level, to respect each other’s faiths,” he said.

Imam Umer Ahmed Ilyasi, the chief imam of the All India Imam Organisation, said that Indians should take the PM’s “extraordinary” and “timely” effort to invite the pope forward by continuing to promote brotherhood among all citizens.

Vivek Muni Maharaj, the founder and president of the Acharya Sushil Muni Mission, said that Modi’s invitation contributes to unity among diverse Indian cultures. Giani Ranjit Singh, the head priest of Gurudwara Bangla Sahib, vowed to continue to support interfaith interactions and called for increasing levels of tolerance and harmony.

He also called on all to replace hatred with love, violence with peace and learn to embrace every person as a brother.

Swami Shantatmananda, the Delhi head of the Ramakrishna Mission, said, “Whatever is your faith, your true religion should be to care for the poor, widows and orphans. It is in doing acts of kindness and goodness that we must become world leaders”.