Even More Starkly, We See How Liberal Democracies are Unjust

We are still looking up to the government to do even the things that we could easily do ourselves. 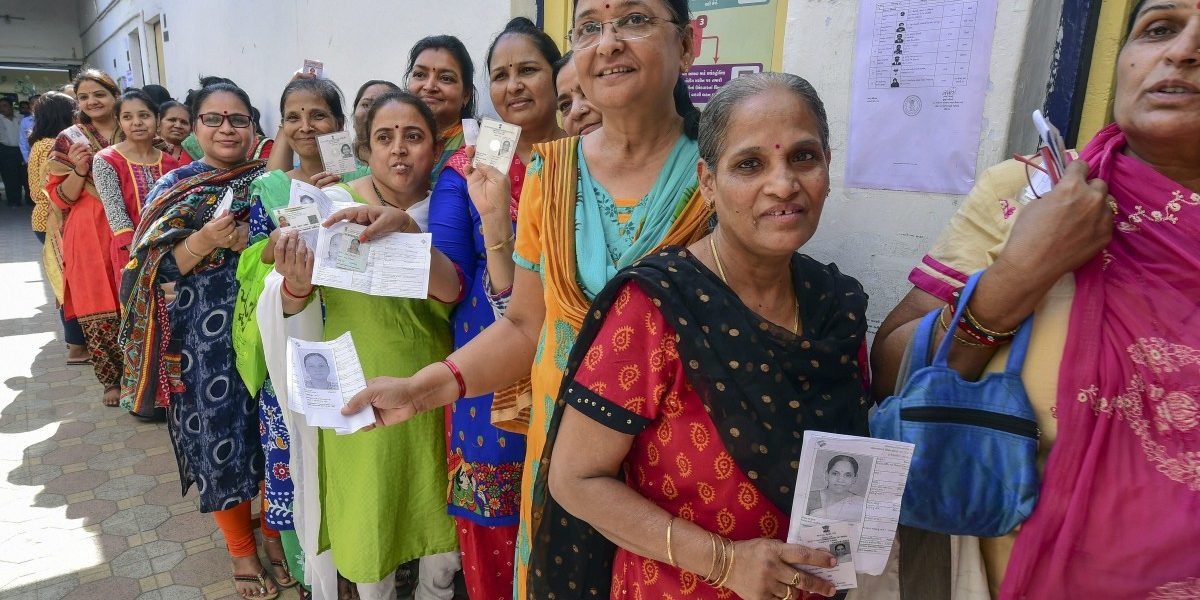 Voters during the third phase of election. Credit: PTI 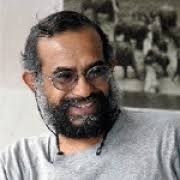 The majority is not necessarily right. This problematic aspect of democracy as the cold game of numbers, is of course not a new debate. This is not only the case with the latest Indian national elections, but previous ones also, regardless of what party is voted into power.

Each such election starkly illustrates the failure of moving towards genuine democracy since Independence. The Constitution of India in spirit and partially in letter, decentralises governance. But no government has been willing to do what Gandhi had advocated as swaraj: giving the capacity, rights, and powers of self-governance (including financial and legal) to each local settlement, and building from this outwards into ‘oceanic circles’ of accountable governance at wider levels. Kerala’s experiment at people’s planning and Nagaland’s ‘communitisation’ of some sectors (health, education, power) were steps towards it; and a number of citizens’ initiatives have moved the furthest along (more on this below). Overall, though, India is very far from genuinely attempting democracy as swaraj.

This means that we are still looking up to the government to do even the things that we could easily do ourselves, such as keeping our surrounds clean. It’s a capitulation that easily also leads us to look for strong-men, to get swayed by individuals with charisma, where even parties are forgotten (would BJP fare well if Modi is taken out of the equation?). It is also a sign of democratic immaturity when, once again, we think that the majority, or those with maximum votes, are right, or have the authority to over-ride the concerns and interests of everyone else.

Going back to the drawing board

Whether parties win by a majority, or by a ‘maximalist’ approach in which a candidate with even 30% of the votes can be elected, democracy is murdered. Let us go back to the drawing board. The term ‘democracy’, in its original Greek meaning, is about power of the people, or to use Abraham Lincoln’s famous phrase, ‘government of the people, by the people, for the people’. What we have across the world is more like ‘government of, by, and for those elected by some of the people’. The public has voluntarily given up its own power to a handful of people elected ostensibly to serve it, but in reality rule it.

Such a model of democracy also means that many voices are covered over by the dust of victory and defeat. Farming and crafts make up India’s largest livelihood sectors, and are in severe distress. Wherever I’ve spoken to craftspersons, they have expressed unhappiness about demonetisation and GST. Were they amongst the 50%-plus that did not vote for NDA, or perhaps amongst the 30%-plus of the electorate that did not vote at all? Or maybe many of them did support BJP in the hope that something new will happen. Regardless, their marginalisation will continue, since in a centralised economy and polity, they have no control over their own livelihoods except where they are mobilised (on which, see below). The Congress-led government’s move to globalise our economy in 1991 was a big hit on these livelihoods. The BJP’s election manifesto did not even mention crafts, even though 150 to 200 million people’s livelihoods are connected to it.

Don’t get me wrong. I am not saying that the 45-odd% that voted the NDA are wrong, or the others who did not have got it right. That’s beside the point. 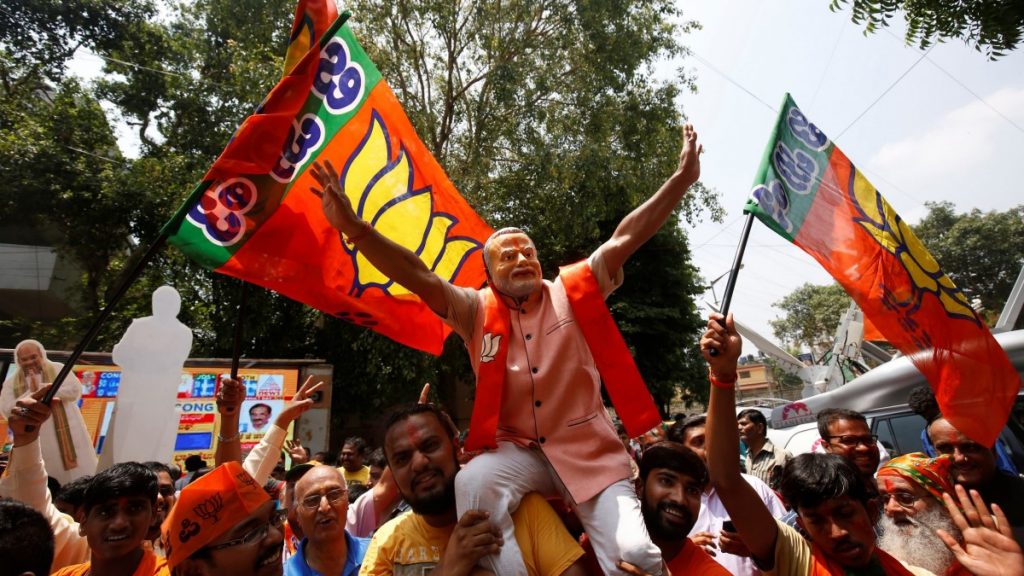 Building power at the grassroots

The point is, in these seven decades, we should have worked towards building power at the grassroots. We should have many more initiatives like the Maha Gramsabha in Gadchiroli district in Maharashtra, with nearly 90 villages asserting that in their ilaka (territory), they are the key decision-makers, refusing to allow mining, taking over forest governance, empowering women to be part of the decision-making. This is partly inspired by the now-famous example of Mendha-Lekha village, which three decades ago declared “we elect the government in Mumbai and Delhi, but we are the government in our village”, and has shown how to be relatively self-reliant. Or there are the Dalit women of the Deccan Development Society in Telangana achieving food sovereignty (full community control over agriculture). The move of several communities to reclaim full control over forests, pastures, and other natural commons (reversing 200-plus years of control by the forest department), either de facto or using the Forest Rights Act, are yet other instances. Some low-income colonies of Bhuj town have moved towards self-reliance in housing, water, and other amenities under the Homes in the City programme facilitated by civil society organisations. If we had heeded Gandhi’s sane advise to help communities become self-reliant rather than concentrate power in Delhi, we’d have had many more such examples.

These 70 years have also been a lost opportunity for communities to confront internal inequities and injustices (without which self-governance could be horrific for women, Dalits, minorities, etc). In Kuthambakkam village near Chennai, a Dalit sarpanch Elango R. was able to convince dozens of families to live in a mixed caste settlement called Samathapuram. More such processes could have reduced considerably the kinds of stereotyping, misunderstanding and vilification that parties like the BJP profit from, where one section (Hindus, upper castes, men, etc) is led to believe that all their problems are because of the ‘other’ (Muslims, Dalits, women, etc).

As it stands, even the few existing initiatives at real democracy are threatened by the state (and its corporate friends). Other than perhaps that dark period called the Emergency (which, along with the 1984 anti-Sikh riots, the Congress has to answer for), this threat looms largest now. While not unique to the BJP, the attack on democratic freedoms has visibly intensified in the past five years. Several activists who have stood up for justice have been in jail on flimsy charges, if not outright killed. Rather ironical, given that another accused of terrorist activities (and an open supporter of Gandhi’s assassin Nathuram Godse) has just become the BJP’s MP from Bhopal. 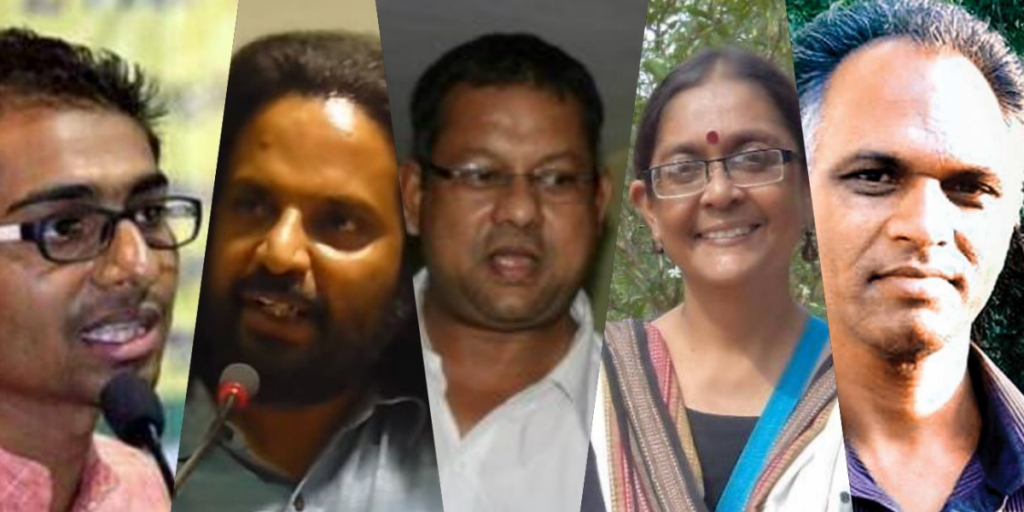 The Sangh parivar (as also hardline elements within Muslims and other religions) remains intensely patriarchal, not to mention openly hostile to the multiple sexualities and genders people may identify themselves with. This trend towards an authoritarian approach to power is one of many reasons that the BJP’s continuation in power is intensely worrying.

Of course, if at all there are openings in the government (regardless of our views of the BJP), one must also look for spaces to improve living and working conditions of those currently deprived. The few positive elements of BJP’s manifesto or programmes could be arenas for dialogue and positive contributions by civil society. Decentralised renewable energy, tackling air pollution and plastics, organic farming, women’s empowerment, are examples. There are hundreds of such successful examples to be learnt from, if the government is really interested.

Overall, though, people everywhere need to gear up for continued resistance against destructive policies and projects, against the dilution of hard-fought rights-based laws, and in solidarity with the victims of the communal, neo-liberal, authoritarian forces emboldened by the BJP’s victory. And to focus on the radical empowerment of and by communities and workers’ groups and other collectives, that would help build swaraj, even if this is likely to take decades. Only then can we move away from the debilitating dependence on the state, and on whatever party claims the seat of power.

In the final episode of the epic Game of Thrones, the dragon trains its awesome firepower not at the anti-hero John Snow who has just killed its ‘mother’ Daenerys Targaryen, but at the Iron Throne. This is heavily symbolic, for the fight over who gets to sit on this throne and rule the world has already laid waste to millions of lives. Daenerys, believing herself to be the savior of all, will even kill thousands of innocent people if she believes them blocking her path towards becoming queen. But as the throne melts into liquid iron, the dragon appears to be the wisest of them all, signaling that a centralised state is what we need to get rid of.

Ashish Kothari is with Kalpavriksh, Pune. Views are personal.