The information was previously denied by the company's central public information officer.

In September 2019, Commonwealth Human Rights Initiative reported that the Bharat Electronics Ltd. (BEL) did a volte face under the Right to Information (RTI) Act about supplying information relating to Electronic Voting Machines (EVMs) and Voter Verified Paper Trail Units (VVPATs) deployed during the 2019 general elections. After demanding copying charges to provide the information I requested, the central public information officer (CPIO) returned the money, claiming that BEL did not hold some of the information and that disclosing names of engineers deputed to provide technical support for these machines at the constituency-level would endanger their lives. The CPIO also denied access to operational manuals relating to these machines.

The CPIO of the Electronics Corporation Ltd (ECIL), which also supplied EVMs and VVPATs for use during the same elections, had also denied information sought in an identical RTI application.

Now, in a welcome turnaround, the ECIL’s first appellate authority (FAA) has upheld my first appeal and directed its CPIO to provide access to all information which had been denied earlier.

Meanwhile, the BEL’s FAA directed the CPIO to transfer the queries relating to the number of EVMs and VVPATs deployed during the 2019 Lok Sabha Elections to the Election Commission of India (ECI) but upheld his decision to reject information about engineers and operational manuals used.

Also Read: BEL Refuses to Disclose EVM, VVPAT Data Even After Demanding Fees. What Does It Mean?

After being rejected by the BEL and ECIL, I had submitted an identical RTI application to the ECI’s CPIO. He did not bother to reply for more than 40 days. Now, I have filed a first appeal and am waiting for the FAA’s decision in this case. The ECI’s CPIO is also required to reply to similar queries transferred to him by BEL’s CPIO.

A tale of three RTI interventions

After closely scrutinising some of the election-related information and statistics that the ECI published, on  June 17, I decided to file two identical RTI applications seeking the following information from BEL and ECIL which neither they nor the ECI have placed in the public domain:

“I would like to obtain the following information pertaining to the Electronic Voting Machines (EVMs), Voter Verified Paper Audit Trails (VVPATs) and Symbol Loading Units (SLUs) supplied by your company for use during the recently concluded General Elections to the Lok Sabha, under the RTI Act:

1) The maximum number of votes recordable on each EVM supplied for use in the 2019 Lok Sabha Elections,

2) The maximum number of votes printable on each VVPAT Machine supplied for use in the 2019 Lok Sabha Elections,

3) The district-wise number of Control Units of EVMs transported across India for use in the 2019 Lok Sabha Elections,

4) The district-wise number of Ballot Units of EVMs transported across India for use in the 2019 Lok Sabha Elections,

5) The district-wise number of VVPATs transported across India for use in the 2019 Lok Sabha Elections,

6) The district-wise number of thermal paper rolls used in VVPATs transported across India for use in the 2019 Lok Sabha Elections,

7) A clear photocopy of the List of Engineers with name and designation, deputed for carrying out tasks relating to the preparation of EVMs and VVPATs that was sent to every District Election Officer in India for the purpose of the 2019 Lok Sabha Elections,

8) A clear photocopy of the List of Senior Level Engineers with name and designation, deputed for supervision and coordination during the preparation of EVMs and VVPATs that was sent to every District Election Officer in India for the purpose of the 2019 Lok Sabha Elections,

9) The total number of SLUs used by your Team(s) of Engineers during the 2019 Lok Sabha Elections,

10) A clear photocopy of the official document handed over to every District Election Officer during the 2019 Lok Sabha Elections containing details of every SLU allocated to your team(s) of Engineers,

11) A clear photocopy of the User Manual prepared by your company, pertaining to the VVPAT machines used during the 2019 Lok Sabha Elections, if any,

12) A clear photocopy of the User Manual prepared by your company, pertaining to the SLUs used during the 2019 Lok Sabha Elections, if any,

13) A clear photocopy of the application filed with the Office of the Patent Controller for securing a patent on VVPAT, if any, along with the postal address of such office, and

14) A clear photocopy of the application filed with the Office of the Patent Controller for securing a patent on SLU, if any, along with the postal address of such office.”

The ECIL’s CPIO did not send a signed reply. Instead, he uploaded some text on the RTI Online Facility without a signature replying as follows:

1) RTI Queries 3, 4, 5 & 6: ECIL’s CPIO claimed that information about EVMs and VVPATs despatched to the Lok Sabha constituencies and the number of thermal paper rolls used for printing the ballots is not readily available and they will be sent as soon as they are received.

2) RTI Queries 7 & 8: The CPIO denied access to the list of Engineers who were stationed in the constituencies to do prepare the EVMs and VVPATs for polling and their superiors who supervised the whole exercise claiming that it was personal information exempt under Section 8(1)(j) of the RTI Act.

3) RTI Queries 10 & 12: The CPIO rejected access to the User Manual of the Symbol Loading Units and the official document related to them, handed over to the district administration after the candidate information is loaded on the EVMs and VVPATs. The CPIO says that it is classified information and attracts Section 8(1)(a) and 8(1)(d) of the RTI Act. Section 8(1)(a) exempts information which will prejudicially affect security and strategic interests of the State. Click here for the ECIL-related RTI application and reply.

First appeal sent to ECIL and the FAA’s order

Aggrieved by the ECIL CPIO’s unsigned reply, I submitted a first appeal with the FAA in September, arguing as follows:

1) ECIL’s CPIO had committed an procedural error by not sending a signed reply;

2) As more than three months had passed since the completion of the 2019 Lok Sabha Elections, information relating to RTI Queries 3-6, that is, constituency-wise deployment of EVMs, VVPATs and thermal paper rolls used in VVPATs should now be available for disclosure;

3) The List of Engineers deployed by ECIL at the constituency-level cannot be treated as personal information whose disclosure would violate their privacy because they were performing public duties;

4) The VVPAT and Symbol Loading Unit User Manuals and VVPAT patent application are also information that must be in the public domain and that the CPIO had not issued a speaking order justifying how the exemptions were attracted.

The FAA examined the issues raised in the appeal and directed the CPIO to collect all the information and supply it under the RTI Act. However, the FAA has not specified a time limit for compliance.

First appeal sent to BEL and the FAA’s order

Aggrieved by the BEL CPIO’s decision to reject access to the information sought in a similar RTI application, despite demanding additional fees initially, I had submitted a first appeal with the FAA in September, 2019 arguing as follows:

1) It is difficult to understand as to why the CPIO who initially charged additional fees calculating the exact number of page for every RTI query, later on claimed that he did not hold the information about the constituency-wise deployment of the EVMs and VVPATs;

2) It is not clear as to how the disclosure of details of Engineers deputed would endanger their lives; and

3) The CPIOs’ revised reply denying access to most of the information which he was prepared to disclose initially indicated that he was under pressure from some internal or external agency to change his stance.

The BEL’s FAA upheld the CPIO’s refusal to supply information relating to the engineers deployed, the operating manuals relating to VVPATs and SLUs and the application submitted for claiming a patent on the VVPATs. However, she directed the CPIO to transfer the first part of the RTI application to the ECI to answer queries relating to the constituency-wise details of deployment of EVMs, VVPATs and thermal paper rolls used in VVPATs. 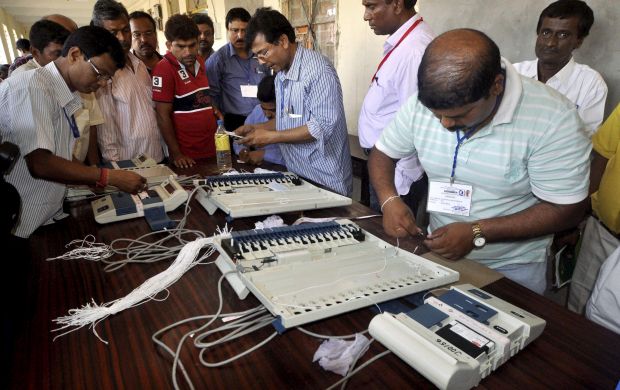 ECI’s treatment of the RTI application

As both BEL and ECIL had initially rejected my request for information about EVMs and VVPATs deployed during the 2019 Lok Sabha Elections and the list of engineers deputed to render technical support, I submitted an RTI application with the ECI seeking similar information. After the ECI’s CPIO did not reply for more than 40 days, I filed a first appeal. Now, the ECI has to make a decision not only on the first appeal but also on the RTI application transferred to it by BEL, in accordance with the FAA’s orders.

Also Read: What the EC Is Hesitant to Tell the Public About EVMs and VVPATs

Lack of uniformity of treatment of similar RTIs

Even 15 years after the law being passed, stipulations under the RTI Act have not been properly implemented. Identical RTI applications yield diverse responses. This is a clear indicator of the failure of the system to make the transformation from secrecy to transparency, as envisaged in the preamble of the RTI Act.

There are many issues to blame for this state of affairs. The political leadership, which only pays lip sympathy to democratic values of transparency and accountability, is responsible. As is the lack of seriousness and commitment from the bureaucracy to making this transformation and the clearly demonstrable weaknesses of oversight mechanisms such as the FAAs and information commissions.

However, the ECIL FAA’s order provides the proverbial silver lining to the dark clouds of poor implementation. The FAA appears to have recognised the imperative of transparency in all matters relating to elections (except voters’ choices) and directed the CPIO to disclose all information. As there is no time limit in his order, I will wait for a month before I explore the need to approach the Central Information Commission (CIC).

As for the BEL, I will challenge before the CIC the FAA’s order upholding rejection of a part of the RTI application. Meanwhile, the wait for the ECI’s response to my first appeal and the RTI application transferred from BEL continues.

Venkatesh Nayak is programme head of the Access to Information Programme of the Commonwealth Human Rights Initiative.

This article was first published on Commonwealth Human Rights Initiative and has been edited for style.