H.S. Doreswamy has been critical of many governments over the years, but has not been called a 'fake freedom fighter'.

New Delhi: Even as several critics have been questioning the invisibility of the Sangh parivar in the Indian nationalist movement, the ruling BJP has gone about setting its credentials as a nationalist party. However, in doing so, many of its leaders have branded its critics as “anti-national” or “urban Naxal”.

In one such recent case, a BJP MLA from Bijapur, Basangouda Patil Yatnal, dismissing a Bengaluru-based 102-year-old freedom fighter H.S. Doreswamy as a “fake freedom fighter” and “a Pakistani agent” has invited severe criticisms from civil society.

Doreswamy has over the past few years been critical of the Narendra Modi-led government’s decisions. The MLA’s comments on him has triggered a political battle in Karnataka, with the Congress producing a document which shows that the veteran had been imprisoned for nearly a year during the Quit India movement. Several members of civil society have criticised the way such a respected figure, whose public life goes back almost 60 years, was berated, even as several senior BJP leaders, including Union minister Prahlad Joshi, came out in support of Yatnal.

When the Indian Express‘s Amrita Dutta met him, Dorswamy said he has been writing his CV now.

The daily describes him such:

“I have been writing my CV,” says H S Doreswamy, peering closely at a bunch of papers he has been scribbling on. In the dim light of his ground-floor residence in south Bengaluru, the 102-year-old reads out a summary of his life, from his birth in the city in 1918 to a family of landed gentry to his participation in the Quit India movement and Vinoba Bhave’s Bhoodan movement, and, most recently, a campaign to revive lakes in Bengaluru. “You can read it and tell me if there is anything anti-national in it,” he says.”

Doreswamy has been a prominent figure in Karnataka for decades. Soon after Yatnal made his incriminating remarks against him, the Congress, last Tuesday, produced a 1971 document that showed the freedom fighter was imprisoned in the Bengaluru Central Jail from “December 18, 1942 and released on December 8, 1943”. The document was signed by the senior superintendent of the Central Jail, describes Doreswamy as a “25-year-old unmarried man”. 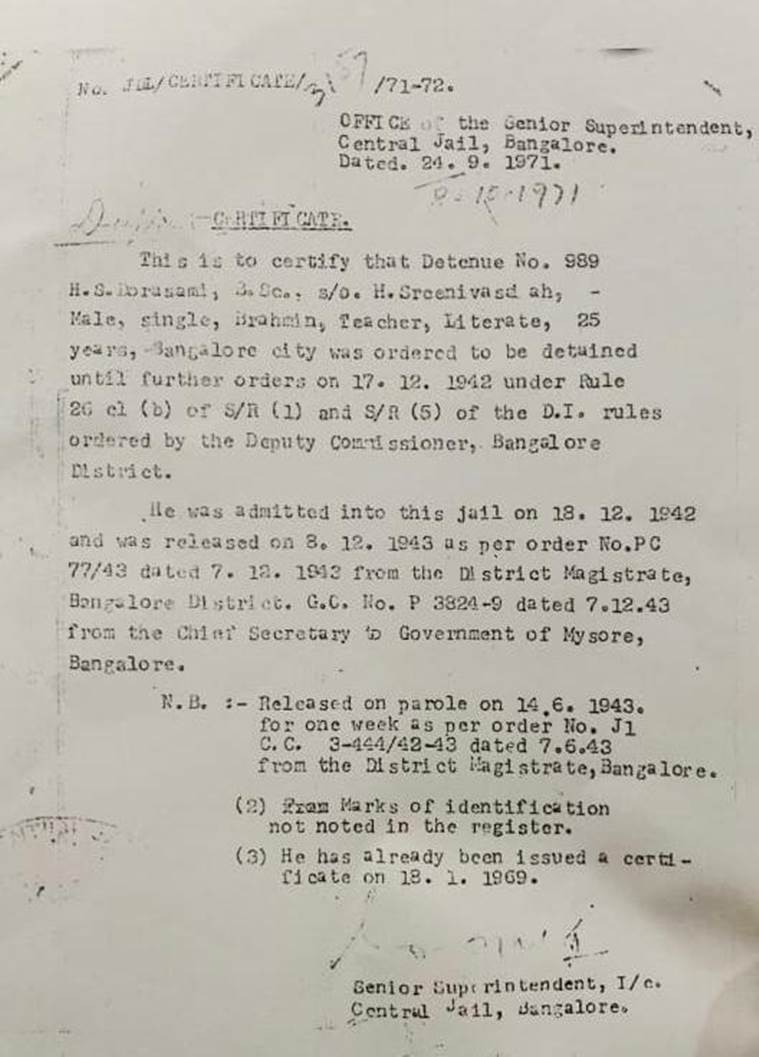 The document released by the Congress to show Doreswamy’s credentials.

“He is the conscience of our state…A man of great decency and honesty, he has been a part of several social and ecological movements, has spoken up for farmers and the landless. He has criticised Congress governments for their shady land deals… But what shocks me the most is the silence of Chief Minister B S Yeddiyurappa, who knows what kind of a person he is, who took oath in the name of farmers,” Guha told the Indian Express.

Anti-corruption activist S.R. Hiremath said, “To call a Gandhian figure like him ‘Pakistani agent’ or accuse him of inciting violence is laughable.”

The campaign against Doreswamy isn’t surprising, given the poor record of the Union government and quite a few BJP-led states in dealing with dissenting citizens. Karnataka and Uttar Pradesh, particularly, have been at the forefront of curbing dissent.

Doreswamy had recently opposed the arrest of a 19-year-old activist Amulya Leona Noronha who was booked on sedition charges for raising slogans towards harmony among nations, including Pakistan. Yatnal made his remarks against Doreswamy by showing a photograph of the freedom fighter at Noronha’s residence. The freedom fighter said he too was taken aback by the attacks on him. “I have been in public life for 60 years. We have differences in ideology but I have friends in the BJP and RSS too. I never expected that the BJP as a whole would attack me like this,” Doreswamy said.

He said that he has been critical of the Modi government, but contended, “I have criticised every government. That is a citizen’s privilege. During the Emergency, I wrote a letter to then PM Indira Gandhi, saying, ‘You are ruling in the name of democracy, but behaving like a dictator… If this continues, I will go house to house telling people you are a dictator’.”

Even then, Doreswamy spent four months in jail and was released only after a magistrate dismissed the case, saying “he has every right to criticise his prime minister”.

Doreswamy, who was a teacher of physics and maths at a school in Bengaluru, Doreswamy recollected his days in the freedom struggle in June 1942 during the Mahatma Gandhi’s “Quit India” call.

“We would place small ‘time bombs’ in post boxes near government offices. They were not meant to kill people. They would burn documents, disrupting government communication. Sometimes, we would tie bombs to tails of rats and throw them into record rooms,” he recalled. He was arrested for arson six months later.

Participated in many protests

In the past few decades, Doreswamy has led and participated in many protests, from those against the Kaiga nuclear plant in north Karnataka to rights of landless farmers. In 2014, he collaborated with journalist Gauri Lankesh to appeal to Naxalites to give up arms and join the mainstream. “We want Naxals to join a democratic system. But these peoples call me a Naxal!” he said. Lankesh was killed on September 5, 2017.

Doreswamy remembered Amulya’s father as one who provided surety for two former Maoists, “Five or seven years ago, I had gone to Koppa, where about 500 homes of tribals were about to be demolished. I don’t remember but my friends say the family had called us for supper. She (Amulya) was in Class 5-6, a child. Or is it that she was a born Naxal?” he told Indian Express.

He said that the RSS used to be a “weak force”, with “no freedom fighters among them”, but became influential through the BJP because of the failure of successive governments. “They invite them (children) to shakhas to play, and then poison their minds with anti-Muslim hate,” he said, speaking about an RSS shakha near his house.

“Gandhi wanted poverty reduced on a priority basis. But other than that, politicians have done everything, gone to the moon, squandered money, melted hills and hillocks.”

Several intellectuals have now come out in Doreswamy’s support. In an open letter on March 3, writer Devanoor Mahadeva wrote, “Without the courage to look at the problems his words point to… instead of being in wonder that a man from another era lives among us, a man who has lived by non-violence for more than a hundred years, only makes us Lilliputian.”

Despite the campaign against him, Doreswamy, however, is still hopeful. “My friends say it is because they want to curb my voice. But rules and regulations are there, the Constitution is there to defend us. People are there. They know me through and through. My life is like a mirror. Definitely, people will stand behind me… The poor deserve food, employment, literacy. That is why I am still fighting,” he said.