The Wages Of COVID-19 Lockdown In Dharavi – A Sense Of Panic, Loss Of Self

A volunteer attending to the distress calls of migrant workers writes about their deep sense of alienation which needs to be acknowledged by society in a way that does not destroy their dignity. 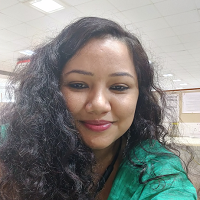 Mumbai: “When this lockdown is over, please come to Dharavi; I will stitch clothes for you, for your family,’’ Jamil told me. “Do let me know.”

Jamil lived less than 15 km from my Mumbai apartment, in the slum clusters of Dharavi. Before the lockdown, he worked in a small textile shop in Dharavi during the day and retired to a cramped room that he and seven other co-workers had taken on rent. Years ago, he had migrated to Mumbai from Jharkhand to earn money for his family. When the lockdown was imposed, Jamil’s shop was shuttered. Without money to pay his landlord, he and his co-workers were forced out of their room.

He called the Stranded Workers Action Network (SWAN) seeking help. As a volunteer with SWAN, I helped arrange a small direct transfer of money to cover his immediate needs. His offer to sew my clothes in return was generous. It spoke of the dignity his work gives him, and his pride in being able to provide for his family.

Jamil (in the centre) with co-workers: forced to live in the workplace after being turned out by the landlord. Photo: By arrangement

I have had the same offer from others calling for help from Dharavi: to help me with construction work, tiling or whatever their livelihood is. And, whenever I have listened closely, I have heard more. In their dignified voices, I have caught underlying notes of mental anguish that testify to the immense pressure they have been under during the lockdown.

Crammed with makeshift tin and concrete shanties, Dharavi’s houses are particularly vulnerable to the spread of a virus. It is common for more than a hundred people to use a single bathroom. It is quite likely that someone who has been infected with COVID-19 has used it that same day. In the 2.02 sq km spread of Dharavi, there are 225 public toilets for a population of 8.5 lakh, out of which, as of June 3,  over 1,849 people were diagnosed with COVID -19. That is higher than the number of infections in all of Assam or Kerala.

More than 70 people from Jamil’s immediate surroundings have already died from the disease. There is no way of practising social distancing in lanes barely wide enough for two people to pass each other without brushing shoulders. And there is no other place to be. Staying indoors – under hot tin roofs – is unbearable; for those like Jamil who have been thrown out, it is impossible. Claustrophobia mingled with the fear of the virus make the situation intolerable. 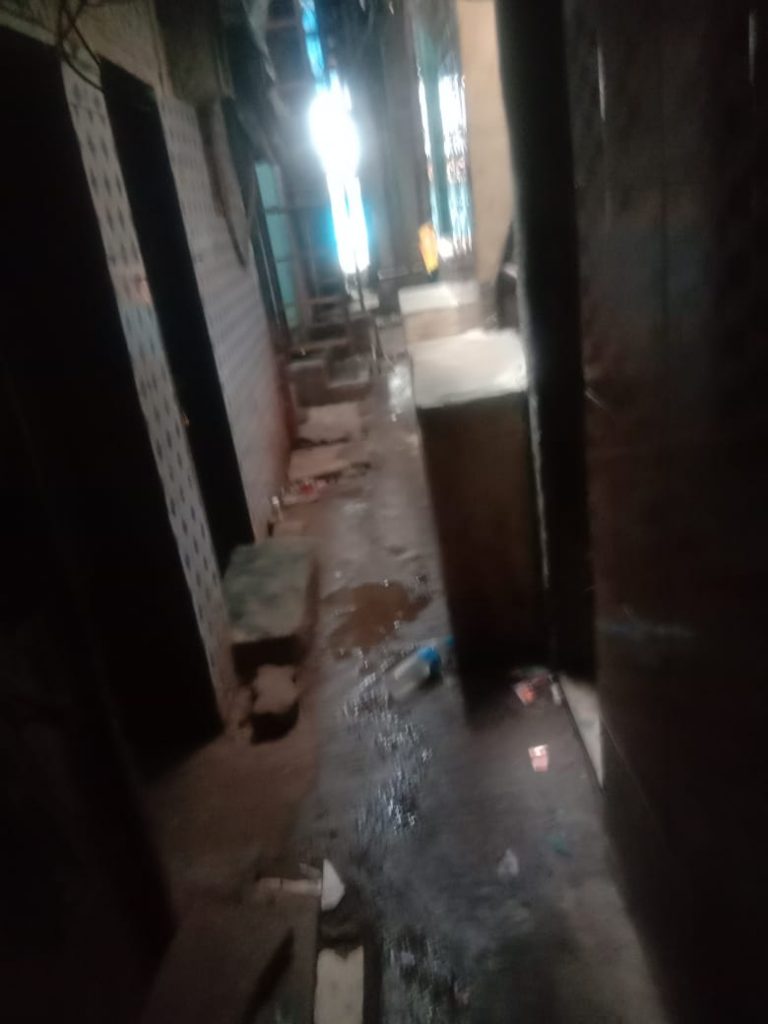 The narrow lanes of Dharavi.

Even setting aside the pervasive threat of COVID-19, food and money are scarce in Dharavi. From April 5 to May 31, of the 6,319 workers SWAN spoke to in Maharashtra, 52% had rations for only a day or less. In Dharavi, 60% of the 338 workers we spoke to said they had rations that would last just about a day or less.

Community kitchens have been set up in Dharavi by NGOs and religious organisations, but anyone who is late in joining the serpentine queue runs the risk of being told that the food is over. Then, there is no option but to go to bed on an empty stomach.

Most of the migrant workers in Dharavi whom I have spoken to want to escape. In that respect, Jamil was luckier than most. After he and his co-workers were thrown out of their room, they stayed in the workshop for a while. After almost 50 days of the lockdown, on May 12, he located a truck heading to his hometown in Jharkhand and left.

Others I spoke to have not been as lucky. Hira also lives in Dharavi. Before the lockdown, he was the sole breadwinner for his family of five in Bihar. He has not been paid since the lockdown began. In that, he is not alone. Nearly 84% of the workers in Maharashtra that SWAN spoke to said they have not been paid even partially during the lockdown. Like many others, Hira’s savings have dried up. He is desperate to escape Dharavi. 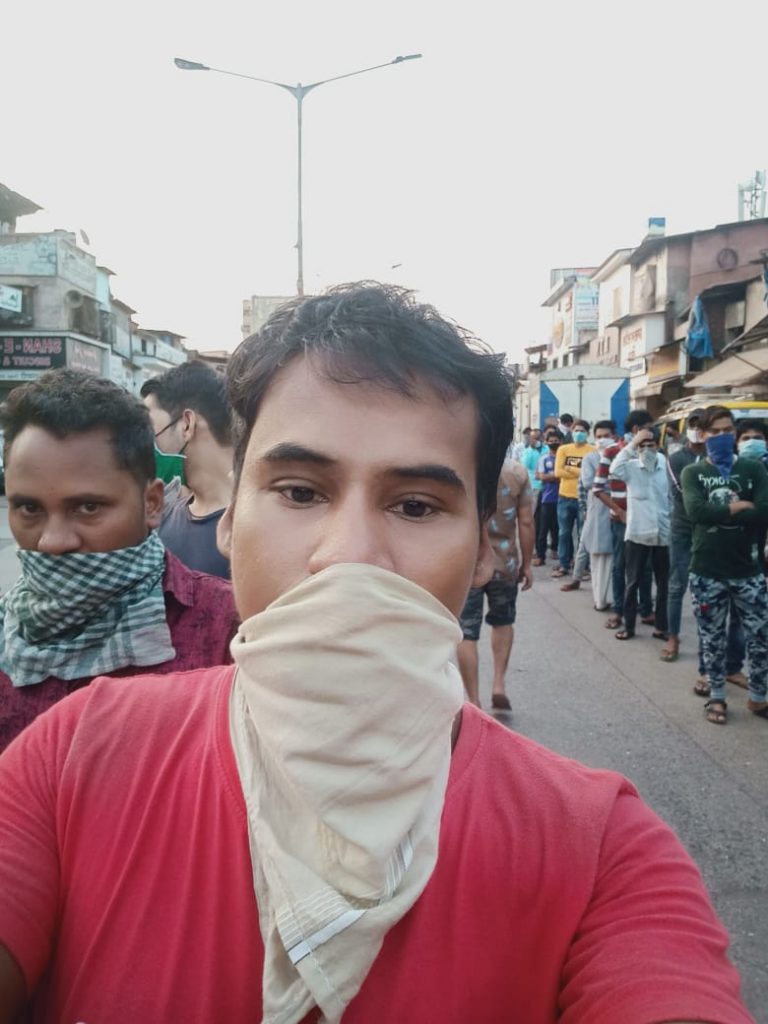 Hira and other workers waiting in line for a cooked meal served by a religious organisation. Photo: By arrangement

The Maharashtra government has set aside Rs 54 crore to get migrants home safely. Hira is hoping to benefit from this measure. The people living around him in Dharavi are struggling to get home too. They have been borrowing money or selling whatever possessions they have, to pay for the journey home.

The higher the desperation, the higher the travel costs – even a cramped squatting space at the back of a goods truck is going for thousands of rupees, which Hira cannot afford. His only valuable possession is his cell phone. Some time ago, he paid Rs 5,000 to buy it; selling it now will not even cover the cost of the trip home. He needs help but doesn’t know where to turn. Will the Bihar government provide help, or the Maharashtra administration? He sees no way out.

Also Read: Bablu Bhaiya, Can You Forgive Us?

As Hira’s despondency increases, so does his desire to see his family. He told me that the thought of seeing his hometown and the faces of his family members gives him goosebumps.

Migrant workers have spoken to me about their sense of hopelessness and social isolation. Sometimes, when I receive distress calls, I can sense that they just want to be heard by someone, to share their distress and inability to take any kind of action. Their words reflect a sense of panic and a loss of self.

Day after day, as I attend to the distress calls of migrant workers, I can think of only one thing – the crisis-ridden circumstances of these workers and their deep sense of alienation need to be acknowledged in a way that does not destroy their dignity. That basic need is not being fulfilled.

Migrant workers living in their workshop in Dharavi post-lockdown. Photo: By arrangement

In the time of COVID-19, the narrow lanes of Dharavi are not only physically perilous; they are exerting tremendous strain on the mental health of its inhabitants. That the current crisis comes with immense mental pressure has been widely acknowledged. The United Nations secretary-general, Antonio Guterres, has emphasised, “Mental health services are an essential part of all government responses to COVID-19. They must all be expanded and fully funded.”

On its part, the Indian health ministry has issued regulatory guidelines on handling social isolation during the lockdown and publicised a national helpline for psycho-social support counselling for people in distress – the  COVID-19 Mental Health Helpline 08046110007, which acknowledges the need for assistance by children, women, the elderly and adults. I must add, though, that on the occasions I tried dialling the helpline, I was not able to get through.

When it comes to the working class, many are all too ready to believe that the idea of mental well-being is simply not applicable to them because they constitute “just brawn”. How wrong can one be?

When we are confronted with other public health crises, the aim is to do whatever it takes to return them to full health. For that we need to acknowledge that they are affected by the health crisis. Likewise, the extreme mental trauma of migrant workers trapped across the country by the COVID-19 lockdown requires a deeper acknowledgment. Migrant workers need to know from society that they matter, their lives matter, their suffering is of concern to those who inhabit cities they have built.

Jamil, Hira and many more migrant workers whose distress calls I attended came to Mumbai to secure a dignified life for themselves. For the little we at SWAN were able to do – transfer some amount of money to them – they expressed their gratitude, showered blessings and offered their services for free once the lockdown was lifted.  It is their physical labour that keeps Mumbai, ‘the city that never sleeps’, on its feet. The pride in their work shone through in each conversation with me. It gave them satisfaction. But more than that, it gave them dignity; their hard work paved the way for their families to move forward in life. That work was put on hold by the lockdown, so too their dignity.

Yet, every time Jamil, Hira and others spoke to me and other SWAN volunteers, what came through was their quiet dignity, despite the deep scars of the lockdown experience they bear on their psyche.

They will survive this storm with their dignity intact. Whether our own dignity and self-respect survives this humanitarian crisis will depend on our thoughts and actions towards them now.

Ritika Sah is a development practitioner and a volunteer with Stranded Workers Action Network (SWAN).