No government, irrespective of the strength of its mandate, can afford to disregard voices of people emerging from the ground. 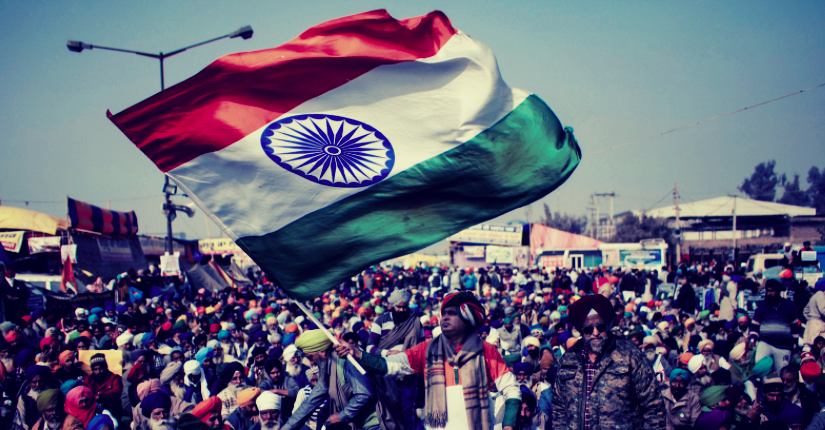 A file photo of a farmer waving the tricolour at Singhu in late 2020. Photo: PTI/File

Narendra Modi’s announcement on Friday repealing the three new farm laws is proof that democracy is still alive and kicking in India.

The laws had resulted in widespread protests from farmers congregating on the borders of the national capital since August 2020. The decision, which comes a few months before the state assembly elections due in the ‘grain bowl’ state of Punjab and the politically significant Uttar Pradesh, is proof that sustained public pressure on policy issues cannot be ignored by any government notwithstanding its might in parliament.

Commentators on Indian politics have expressed fears that the country’s democratic credentials are slowly eroding ever since the right-wing Bharatiya Janata Party formed a majority government and returned with a stronger mandate in 2019. The fear is not misplaced as the government has demonstrated high-handed tactics in its handling of the farmer protests and other such acts critical of the government, to suppress dissent.

The framing of sedition charges against journalists reporting the farmer’s protests on January 26 via social media, on a day when, ironically, the nation was celebrating its founding as a democratic republic was perhaps a particularly low point during the struggle. Several hundreds of farmers also lost their lives while braving rough conditions.

Also read: Families of Over 500 Punjab Farmers Who Died During Protests Haven’t Got Govt Jobs Yet

Authoritarian present and past

The BJP government passed the three farm laws in September last year bulldozing parliamentary procedure and ignoring Opposition demands for wider consultation. Prior to that, the country witnessed the arrest of students and activists opposing the Citizenship Amendment Act (CAA) under the draconian Unlawful Activities Prevention Act – amended in 2019 to allow the state powers to arbitrarily declare citizens as terrorists.

The government also suspended the fundamental right to freedom of assembly to citizens in several parts of India in the wake of the anti-CAA protests in 2019. The CAA made religion a basis for granting citizenship in India, striking at the very root of India’s secular credentials.

In September last year, as I was conducting my doctoral fieldwork in India on the right to information movement, social activist Aruna Roy told me that she found the current state of “undeclared emergency” in India far worse than what had happened during the Emergency in 1975 under the leadership of Indira Gandhi.

In 1975, Roy had quit her job in the Indian civil services to pursue social activism in rural India and oversaw a grassroots struggle for a right to information law to empower citizens to ask questions of those in government.

Commentators have often drawn parallels between the governments of Modi and Indira Gandhi for its similarly authoritarian tactics. But in 1975, the government had a justifiable legal basis for the widespread suspension of civil rights; today there is none.

The 1975 Emergency was a lawful suspension of the law. Between 1975 and 1977, Gandhi had suspended fundamental rights, arrested political opponents and critics of the government, muzzled the free press, and plunged democratic India into a deep darkness that shook the intrinsic faith of the average Indian in the benevolent state.

Several leaders of the Bharatiya Jana Sangh, the right-wing political party that was the forerunner to the current ruling BJP, had come under attack back then. The assault on India’s democratic spirit, thus, is not new.

But, if there is one thing that my research on India’s right to information movement has made evident, it is that every crisis also presents within itself an opportunity.

As Sunil Khilnani noted in his book ‘Incarnations: India in 50 Lives’: “The enduring effect of her (Gandhi’s) rule was to open the state to a deeper and more accessible democracy”.

In 1975, attempts by the Congress government to muzzle dissent resulted in the rise of a strong political opposition. Mrs. Gandhi was accused of electoral malpractices by her political opponent Raj Narain resulting in a legal battle. To verify charges that the Prime Minister had abused the state machinery for the elections, the Allahabad high court demanded the official ‘Blue Book’ containing details of the Prime Minister’s campaign trail. The government refused to share the Blue Book with the court citing state privileges and official secrecy provisions.

However, the court refused to accept that argument noting that citizens in free India had a right to know about the activities of their elected representatives. The government relented eventually, resulting in the framing of charges against the Prime Minister for the first time in Indian history, nullifying her election. While this court judgment, later overruled by the Supreme Court, served as the immediate provocation for imposing an Emergency in 1975, the high court order nonetheless heralded the struggle for a right to information law in India.

I recount this nugget of history here to demonstrate how an effort to suppress dissent by the government became the starting point for a citizen’s movement later on.

The post-Emergency era in India not only witnessed the cementing of a political opposition against the Congress, which had enjoyed untrammelled power for the first three decades since India became independent, but also saw several people-powered movements take shape outside of the sphere of formal party politics.

The civil society organisation – Mazdoor Kisan Shakti Sangathan – led by Roy is one such example. Though it took several more years of struggle before the Right to Information Act was finally passed in 2005, it is evident how the Emergency era provided the impetus for the grassroots struggle for the information law on the ground.

While the constitution of India clearly empowers the state to assume an authoritarian position, it is equally true that the people on the ground are able to creatively exercise their agency to resist the state through popular struggles. This is what India witnessed recently in the form of the farmer’s protests. Soon after the protests had gained momentum, the government of India was pressurised to retract some of its earlier steps, such as the decision to criminalise stubble burning, and modifying the electricity subsidy provisions for farmers.

Friday’s announcement with respect to completely repealing the new farm laws only further affirms how no government, irrespective of the strength of its mandate, can afford to disregard voices of people emerging from the ground.

Often, in mainstream discourse one comes across such declarations that the constitution is dead or that the idea of a democratic republic, which our founding fathers envisaged, has been murdered by the ruling powers. What such analyses overlook are the countervailing forces that authoritarian aggression generates. It is worth remembering that the idea of India the constitution embodies was itself the result of such a protracted struggle waged by the people against the colonial powers.

Hence, the obituaries for India’s democracy can wait.

Vidya Venkat is a doctoral researcher at SOAS, University of London. She has worked as a journalist in India for several years since 2007. She can be reached at vidya_venkat@soas.ac.uk.