'Democracy Has Plunged to a New Low': Gandhi Peace Foundation on Kashmir

"Even during the Emergency, the Lok Sabha was not humiliated in this manner – the Opposition then ensured that," a statement issued by the Foundation says. 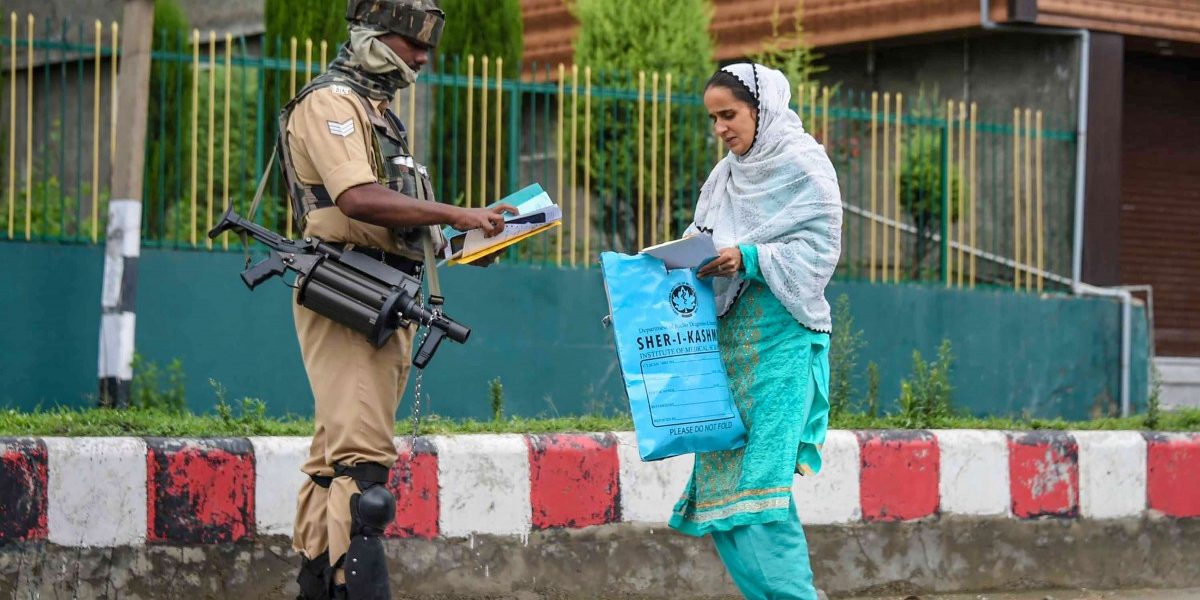 A woman shows her medical documents to a jawan during curfew in Srinagar. Photo: PTI/S. Irfan

New Delhi: The Gandhi Peace Foundation has issued a statement saying that the Centre’s decisions on Kashmir have “pushed the country into a blind alley”, and Kashmir has “become a mortuary”.

The Foundation has also criticised the manner in which the changes were rushed through parliament, without any real debate and consideration. “Even during the Emergency, the Lok Sabha was not humiliated in this manner – the Opposition then ensured that. This time our democracy has plunged to a new low,” the signatories have said.

The statement also questions home minister Amit Shah’s statement that “three families” had ruined Jammu and Kashmir and come in the way of the state’s development. “Is the government so weak that it cannot take on the might of these three families? Not only the Congress but also Atal Bihari Vajpayee and the present regime have shared power with these families. Does that mean that they too have a share in the loot?”

Saying that this was an “hour of crisis”, the statement calls on people from the rest of India to stand with Kashmir, and ensure that the government protects not only law and order but also human rights.

The full text of the statement and list of signatories is below.

Having listened to the debates on Kashmir in the Rajya Sabha and Lok Sabha, the Prime Minister’s address to the nation, and having watched subsequent developments in Kashmir, we as citizens of India inspired by the life and work of Mahatma Gandhi feel compelled to state that the government has pushed the country into a blind alley. The gun that was used to silence Kashmir is now being used as a telescope through which to see Kashmir. This is shameful, unfortunate and ominous for India.

A whole state has vanished from the map in broad daylight. The Indian Union had 28 states, now it has 27. This is not a magic show, where a magician shows us, we know, something unreal and illusory. Here we are witnessing something cruel, ugly, undemocratic and seemingly irreversible. It reveals the poverty of our democratic politics.

Even during the Emergency, the Lok Sabha was not humiliated in this manner—the Opposition then ensured that. This time our democracy has plunged to a new low. It is being said that democracy is driven by the majority and a large majority has decided the fate of Kashmir. What is blithely concealed is that a true majority implies a multiplicity of opinions and the presence of contending views. What took place in the Parliament this time was far from an exchange of views or a serious debate. One man shouted, more than three hundred thumped desks, and the rest sat crestfallen, defeated. This is not bahumat or majority, but bahusankhya or majoritarianism—an attempt to rule by numbers. There was no clash of well-thought-out opinions or convincing arguments. You were only offered heads to be counted.

History bequeathed Kashmir to us with a challenge—how to make it a part of our geography. Globally it was a rare example of a state signing a conditional treaty of accession. That is how Kashmir came to us and we accepted it. Article 370 was an instrument of that treaty. In its original conception, as pronounced by Jawaharlal Nehru, it was described as a temporary provision, which would become in the long run redundant. Indeed, that is what it became. Barring those who took advantage of it and those who could not take advantage of Kashmir because of it, there was only a handful of people aware of the existence of Article 370.

Alas, along with the redoubtable challenge Kashmir posed, history also bestowed us with a new combination of amoral politics, an insatiable hunger for power, national and international machinations of communal forces, and imperialist interventions through Pakistan. Kashmir, known as a heaven on earth, came to us enmeshed in hellish complications. And this was at a time when we had just emerged from bloodbath of our own, and struggling to reassemble a fragmented self. It was the most delicate moment in the life of newly decolonized India.

We could have closed our doors on Kashmir, but we did not. It was an act of courage, a new political experiment. We have drifted so far from that moment in history that we cannot fully appreciate the subtle balance at which the triumvirate of Jawaharlal Nehru, Vallabhbhai Patel and Sheikh Abdullah arrived. They were the ones who shaped the contours of Kashmir, as we know it today. Of course, there were mistakes and errors of judgment but popular opposition leaders with moral stature—such as Jayaprakash Narayan, Vinoba Bhave and Ram Manohar Lohia—did not allow absolutist measures in Kashmir. And now, we suddenly find, Kashmir has become a mortuary.

It is being said that a handful of people, especially three families, have run regimes of loot and plunder all these years. Perhaps, but why were no legal remedies sought for that? Instead, the entire state has been turned into a prison. Is the government so weak that it cannot take on the might of these three families? Not only the Congress but also Atal Bihari Vajpayee and the present regime have shared power with these families. Does that mean that they too have a share in the loot? In any case, it is doubtful if our political system is capable of running without corruption? Can somebody tell us, how did the ruling party receive the billions of rupees reported by newspapers recently? How is it that the stream of wealth somehow begins to flow towards those in power? Corruption and nepotism are not confined to Kashmir. Mahatma Gandhi rightly called the entire system rotten.

We will not be able to lock down Kashmir forever. The doors will surely open, the people will come out, and their anguish will burst forth. Foreign elements will poison their minds with even more vigour. All the leaders of the opposition who were urging the people to maintain peace and abide by the rule of law have been imprisoned. We have burnt all the bridges for a possible dialogue.

The picture is far from bucolic. The leaders of the ruling party are busy displaying their ugly private fantasies and greed in public statements on Kashmir. This naked display of the desire to exploit Kashmir in the guise of investment and development has become disgusting. The Prime Minister is right in saying that celebrations are premature and there is a great deal of work to be done in Kashmir. But how does one trust his words? The Parliament was illuminated with celebratory lights right after the passage of the Bill. What is there to celebrate in the unfortunate step we have taken in our own country, against our own people? Such celebrations only deepens the wounds of the Kashmiris.

Those who truly love India and care about its honour and its sovereignty must step in to compensate for the failure of vision, leadership and integrity. What happened in Parliament is not irrefutable or inevitable. Duly elected lawmakers can reverse last week’s decisions. If the Emergency could be overturned, there is no reason why the abrogation of Article 370 cannot be undone, provided enough MPs feel that way. What is harder to undo is the damage done to our democratic political culture. What cannot be bridged is the trust deficit.

We must stand with the Kashmiris in their hour of crisis, which is equally our hour of crisis. Our helpless fellow-citizens who have been imprisoned must know that all right-thinking Indians share their anguish. The government must protect law and order, but it must also allow free expression at every level. That will help us to normalise the situation.