Delhi Riots: GTB Hospital a Picture of Chaos and Panic as Victims Rushed in

Cries of "goli goli" and "firing mein lagi hain" echoed around the hospital. 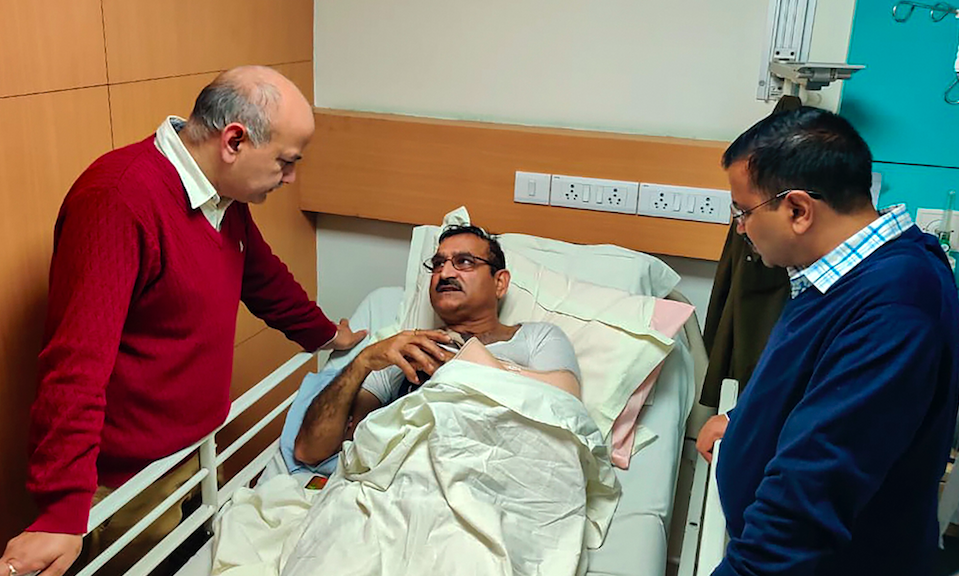 New Delhi: Scenes of chaos, panic and grief were witnessed at Guru Teg Bahadur Hospital on Tuesday as people injured in violence across northeast Delhi were brought to the facility.

Cries of “goli goli” and “firing mein lagi hain” echoed in the hospital as friends, relatives and locals rushed those injured to the casualty ward.

The injured, who were severely wounded, were brought in on motorbikes, autorickshaw, cars, ambulances and police vans.

A man who was suspected to have sustained a gunshot injury was rushed in to GTB hospital on a bike by two men.

Two men arrived at the hospital, asking for help, as they carried in a man with a gunshot injury, who was bleeding profusely.

One of them said that their friend was injured in firing from Kabir Nagar side when he was at Maujpur Chowk area.

Some distance away from the casualty ward, 35-year-old Muddasir Khan’s wife, Ashya was inconsolable as she learnt about her husband’s death.

“I was inside my house with our two children and he was outside near a shop in our lane. Suddenly, I was informed that around 10-15 men arrived there and someone shot at him,” Ashya said.

Khan’s family members said he received a gunshot injury on his head. He lived in Kardam Puri area.

Aashu Khan, a friend of Muddasir said, “We brought him to the hospital with the help of an SHO, but the situation is very tense.”

Shahrukh, 21, who works at a factory, was returning home after buying milk when he was shot at in Kabir Nagar Gali no 4.

“I was returning home after buying milk when I sustained injuries during firing by a mob. The gun shot pierced through my right hand and hit my stomach,” he said while being taken on a stretcher for a CT scan.

Shahrukh said he immediately called up his friend who then rushed him to hospital.

A woman seemed distraught after she learnt that her husband, Rajbir Singh, had sustained severe injuries on his face and head.

She along with her 22-year-old son and neighbour, Himanshu Pal rushed Singh to the hospital.

Singh, a labourer, was sitting outside his house in Kabir Nagar when the mob attacked him, Pal said.

Another man who did not identify himself, said “There was firing in Maujpur Chowk area, I rushed a man who sustained injuries in the firing, despite not knowing his identity.”

A 22-year-old student, Rahul Thakur, was also brought to the hospital on a bike after violence at Brij Puri in New Mustafabad area, his friend Saurabh Sharma said.

Meanwhile at the mortuary, aggrieved relatives of Shahid, a resident of Mustafabad, waited to collect his body.

“Shahid was not part of any protests. He was an autorickshaw driver and he was shot at when he was parking his auto on Monday,” said his relative, Iram.

Iram claimed that they were waiting outside the mortuary since Monday to get an update about his autopsy.

Mohammad Furkan, 25, who dealt in handcrafts, also sustained injuries during the violence at Kardampuri on Monday.

“Furkan had gone outside his house for some work, but later I got a call that he sustained gunshot injuries. When I rushed to GTB, I saw him lying on a stretcher. He was innocent and not a part of any protests,” one of his relatives said.