The police is deliberately trying to link the anti-CAA protests with the riots, the activists say.

New Delhi: Since the riots in north-east Delhi in February which claimed the lives of 53 people, the Delhi Police has summoned several people in an attempt to probe the “conspiracy” behind the violence. Among those to be questioned  are four labour rights activists.

Khajuri Khas – where the four activists were most vocal during the anti-Citizenship (Amendment) Act protests – was among the areas worst affected by the violence. Several reports have said that mobs chanting “Jai Shri Ram” burnt a number buildings in the area.

The four activists – Yogesh Swamy (38), Vishal Kumar (26), Sunny Singh (31) and Rakesh Kumar (30) – were called in for questioning several times between April and August. The four are part of several organisations including Bigul Mazdoor Dasta, a Left-wing group that works on informal sector workers’ issues. They are also part of the Naujavan Bharat Sabha, an organisation based on the principles of Shaheed Bhagat Singh that works on education and employment, and the Bhartiya Krantikari Mazdoor Party that talks about the rights of the working class and contested six seats in the 2019 Lok Sabha election.

The activists told The Wire that the line of questioning indicates the police is trying to link them to the communal violence because of their active participation in the anti-CAA protests. The CAA was passed by parliament late last year, and triggered a series of large-scale protests across the country as many saw the law as discriminatory against Muslims.

Sunny Swamy, a PhD scholar in chemistry from Delhi University, says that he and the other three were “quite active” during the anti-CAA protests since December 2019. “We participated in the protests because we were against the CAA and NRC, which we consider a direct enemy of the poor because they will suffer the most when asked to provide documentation. It divides people on the basis of religion, too.”

The four were most active in organising an anti-CAA protest at Khajuri Khas, which started in February, the same month the violence in Delhi took place.

“They [Delhi Police] have been troubling us since the very start. They have made our comrades sit in the police station for more than 10 hours at a time,” alleged Sunny.

“The police would ask us about the organisers of the Chand Bagh protest in order to link it with the violence. They would ask us about the speakers, the funds and even the Jamia Coordination Committee,” Sunny said. Several members of the Jamia Coordination Committee, formed to overlook the anti-CAA protests at Jamia Millia Islamia, were called in for questioning and some even arrested, including Safoora Zargar and Meeran Haider. Zargar, who is pregnant, was released in June on “humanitarian” grounds.

Sunny also said that the police seemed less interested in their involvement in the protest and attempts to maintain peace and were only “focused on finding links between the protests and the violence”.

‘You are Hindu, why were you at the protests?’

Yogesh Swamy, who is from North-East Delhi, said, “I have been called in thrice by the police. We had, without doubt, been a part of the anti-CAA movement. The police expressed surprise when they heard that we, even as Hindus, opposed the CAA and NRC. Their misconception was that only one community, the Muslim community, thought of it as discriminative and unjust. They were trying to gauge the level of involvement of certain people by their questions.”

He added, “Still, the people that I believe to be the culprits, Kapil Mishra and Anurag Thakur, didn’t even get questioned.” Yogesh is also the vice-president of the Naujavan Bharat Sabha. After the violence, the organisation actively participated in relief operations in several parts of the region. 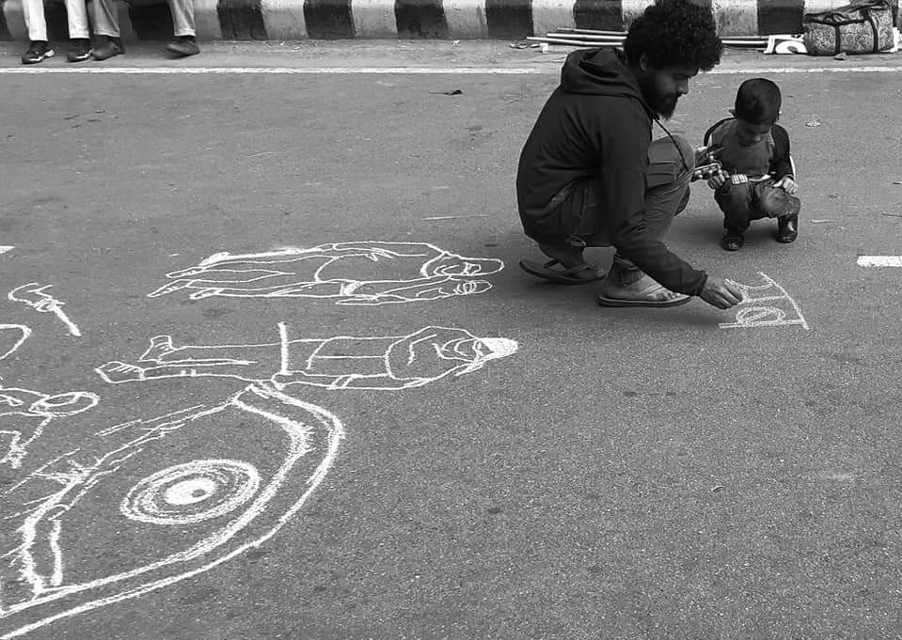 Yogesh was in contact with several prominent faces of the anti-CAA protests, including Safoora Zargar. “The police would often ask us why were in contact. The simple answer was that we had to coordinate with them for a talk I was supposed to give at Jamia Millia Islamia. But they were trying to gather evidence against Zargar, Tahir Hussain and Khalid Saifi,” he said. Hussain and Saifi are still in jail in Delhi riots-related cases.

The four workers’ rights activists had also organised a Jan Satyagraha Padyatra (People’s March for Passive Resistance) on February 16. Sunny Singh says, “We covered several protest sites in northeast Delhi and spread the message of peace and love. We must pass laws like the Rashtriya Rozgar Guarantee (National Employment Guarantee), not CAA. If a register [referring to the NRC] has to be made, it should for a register of unemployed people across the country.” The focus of the march was to bring out the “real issues that the government is trying to hide”.

Sunny and Rakesh have been organising protests and raising concerns about the safety of workers in industrial units in Bawana, Wazirpur and Jhilmil. Sunny has a PhD in quantum mechanics and is looking to be a lecturer and Rakesh gives tuitions for a living.

When this march was still going on, riots broke out in Delhi and the march was renamed to Aman Yatra (peace march). “We spread messages of love and togetherness, and even after all this we did to maintain peace, they are targeting people like us,” said Sunny.

‘Making art does not amount to violence’

Vishal Kumar, a fine arts student at the Delhi College of Art, has been called in for questioning by the Delhi Police’s Special Cell at least four times. As an artist, he believes in non-violent and peaceful forms of protest, using art.

“I don’t understand why they are calling artists. We just drew people’s feelings on the streets, nothing more,” he says. First summoned on April 18, the young artist recalls, “I took legal advice from a lawyer I was in touch with. She had told me not to take my phone along with me to the special cell office, so I didn’t and they started telling me, ‘Tu bada vakil ban raha hai?’ and made me sit on the floor. After investigating my background, they started asking me details of the several protest sites. I was only in touch with some of the responsible people of the protests because they used to call me do to art. They came back to my house with me and confiscated both my phones.”

Kumar occasionally went to the Jamia Millia Islamia protests and was a regular at the Shaheen Bagh’s anti-CAA protests. “I used to be there, organise events and do artwork at the protest sites.” 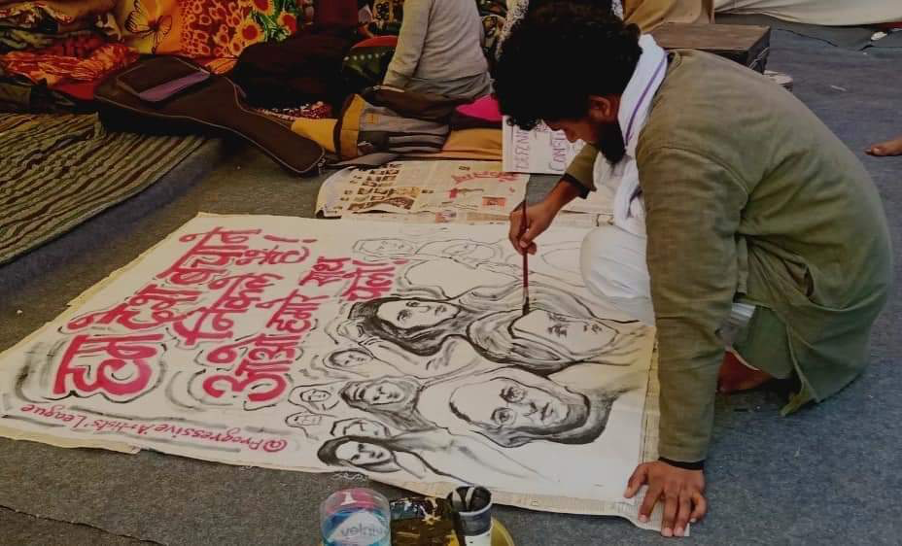 Talking about art, Vishal says, “It’s the best way to express dissent. It’s non-violent and hits your conscience deeply. Making art does not amount to violence.” Kumar’s artwork was focused on slogans and imagery. “For example, we made a painting of Ashfaqulla Khan and Ram Prasad Bismil – both freedom fighters who were good friends to show brotherhood between the Hindu and Muslim communities.”

The slogan on the banner with both the freedom fighters’ portraits reads, “Ashfaq-Bismil ki yaari, virasat hai humari (The friendship of Ashfaq and Bismil is our legacy).” In Urdu, it continued to say, “Inquilab Zindabad (Long live revolution).”

“We also made some educational posters to educate people about our constitution and the CAA,” says Kumar. He added, “Art is diametrically opposed to violence. We are people who don’t believe in violence at all. And I don’t just speak for myself – all the anti-CAA protests were peaceful. If anybody even thought about violence, people would immediately stop them. We want to bring the truth out in a Gandhian way. The kind of attack on anti-CAA protesters is evident – but we still didn’t give up.”

Kumar has worked on at least four big works of protest art and organised an event to draw on the streets. “The main banner in Chand Bagh was made my me and my friends. I also made some at the Khajuri protests. I got to know a lot of people, and especially connected with a lot of people from the protests owing to my art.”

Talking about funds for the paints and other art material, he says, “I am a student; I and other students obviously couldn’t afford to buy paints ourselves. Most people from the protests – when they saw us painting and being so dedicated, they contributed money and material for the art.”

The police, according to the four activists, was keen on knowing where the “funding” for the protests was coming from.

“They are trying to shut us up but we will only get more emboldened. We need to speak up now and voice the truth – as we did during the protests.”

Kumar believes that the “threat” of the CAA is still there. “If we step back now, things will only get worse. First CAA, then arrest of students in Delhi riots conspiracy, then arrest of intellectuals in Bhima Koregaon case.” Calling the investigation being done by Delhi police into the Delhi riots “skewed”, he says, “People are getting falsely implicated. We will continue our fight against these things – mostly online. We will not give in to their threat. The kind of investigation is telling a lot about them [Delhi police]. People who shot in the protests, incited hatred are either out of bail or not implicated at all. But us, artists, are being questioned and investigated for protesting through an absolutely non-violent means.” 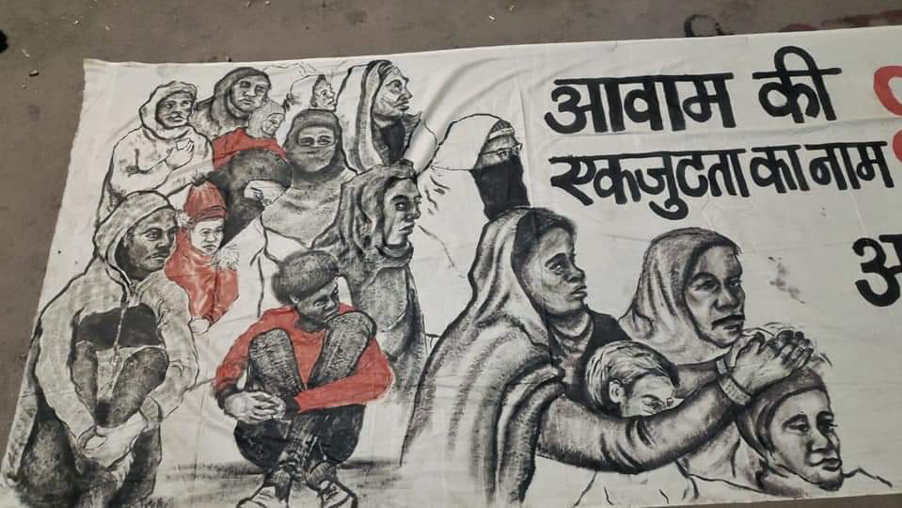 He added, “There are so many things. COVID-19 crisis plus there are so many other issues such as migrant crisis, but they still want to go after artists. It shows their insecurities.”

Yogesh, Sunny, Vishal and Rakesh were sent summon notices that referred to FIR No 59/2020 filed on March 6. The notices were issued under Section 43(F) of the UAPA and said: “Presence of the aforesaid person is necessary for the purpose of investigation into the offence reported to have been committed.”

FIR No 59/2020 is the FIR on the basis of which Jamia Islamia students Safoora Zargar and Meeran Haider had been arrested. Out of the 750 FIRs have been filed by the Delhi police in connection with the riots, only FIR No. 59 has been filed under the UAPA. This FIR is pushing the police’s narrative that the violence stemmed from the anti-CAA protests.