“I woke up to ‘Mullon ko maaron (Kill the Muslims!)’ and ‘Hum Denge Azaadi’ chants...In front of me, they threw acid on a young girl's face," a woman said. 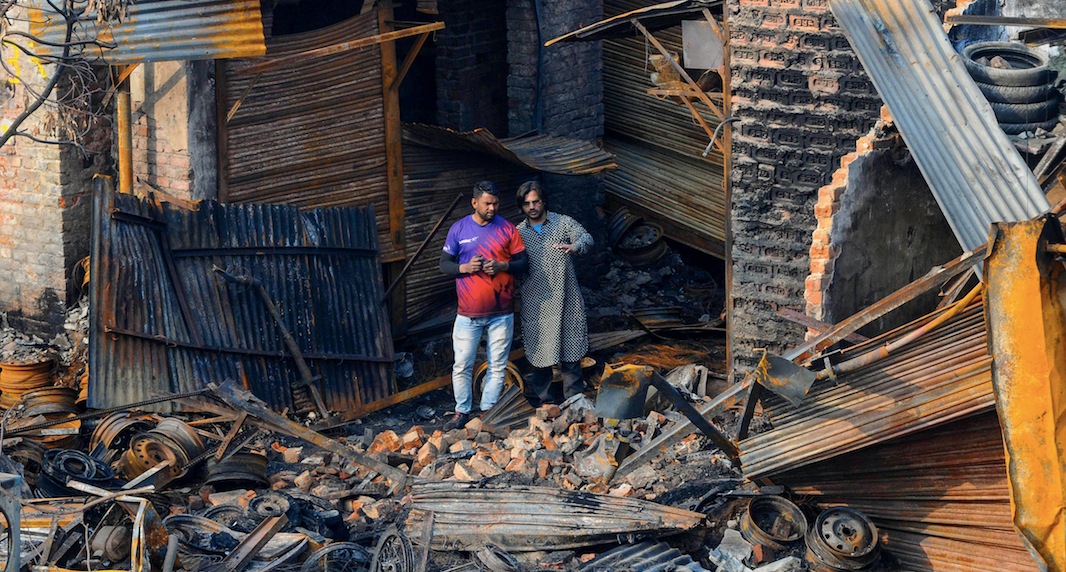 New Delhi: A fact-finding report released by the Delhi Minorities Commission on the violence unleashed in North-East Delhi in February 2020 has shed light on the collusion between state and non-state actors in a planned and targeted attack on members of the Muslim community.

It also brought out the deliberate inaction by police officials, and the incitement of violence by members of the BJP.

A number of BJP ministers used misogynist and communal slurs to refer to the anti-CAA protests led by Muslim women since December 2019. At a rally in Uttar Pradesh, chief minister Yogi Adityanath said, “Men are sleeping under quilts; women, kids are pushed forward to protest against CAA”. The statement not only made it evident that he did not believe in women’s constitutional right to protest but was also a reflection of the perceived masculinity of Muslim men, wherein they are considered to be ‘less manly’.

Historically, during any episodes of communal violence, women’s bodies are used to take revenge against a community. In a Brahmanical society, where women’s bodies are viewed as sites of ‘pride’ and ‘honour’, time and again women have been subjected to sexual assault as a means for the dominant communities to exercise their power and control.

The episode of violence unleashed in North-East Delhi reveals yet again a similar exertion of power with impunity. A similar pattern of violence had emerged in Gujarat in 2002, and Muzaffarnagar in 2013.

In North East Delhi, Muslim women lost their social and financial security, their houses were looted and burned and their jewellery, documents, money, amongst other valuables, were taken by the assailants.

The report said, “Any markers of ‘muslimness’ were attacked by the mob.”

Women were not being attacked simply because of their sex, but more specifically for their Muslim identity. A woman recounted, “So many sisters told me even when they were running, their burkhas were taken off, their hijabs were pulled off. Me, my children and many other people hid on my terrace.”

Several testimonies by women revealed that Hindutva Mobs, armed with weapons, hurled misogynist and communal slurs at them. Women narrated that they were called, “Motherf****r’, ‘Sisterf****r” by the mob.  Another woman said, “They had lathis, swords, they kept chanting ‘Jai Shri Ram’ and “Mullon ko Maaron (Kill the Muslims!).”

The testimonies in the report also narrate how the mob threatened women by referring to slogans of azaadi (freedom) as a metaphor for sexual assault; “Do you want ‘Azaadi’? Come, we will give you azaadi!” the mob said whilst attacking women.

In Shiv Vihar, when women stepped out to protect their husbands and sons, they were physically assaulted and sexually harassed by the mob.

The report further said that the mob threw acid on women and children. Several women also said that Muslims were constantly referred to as ‘terrorists’, ‘anti-national’ and ‘foreigners’ by the mob. 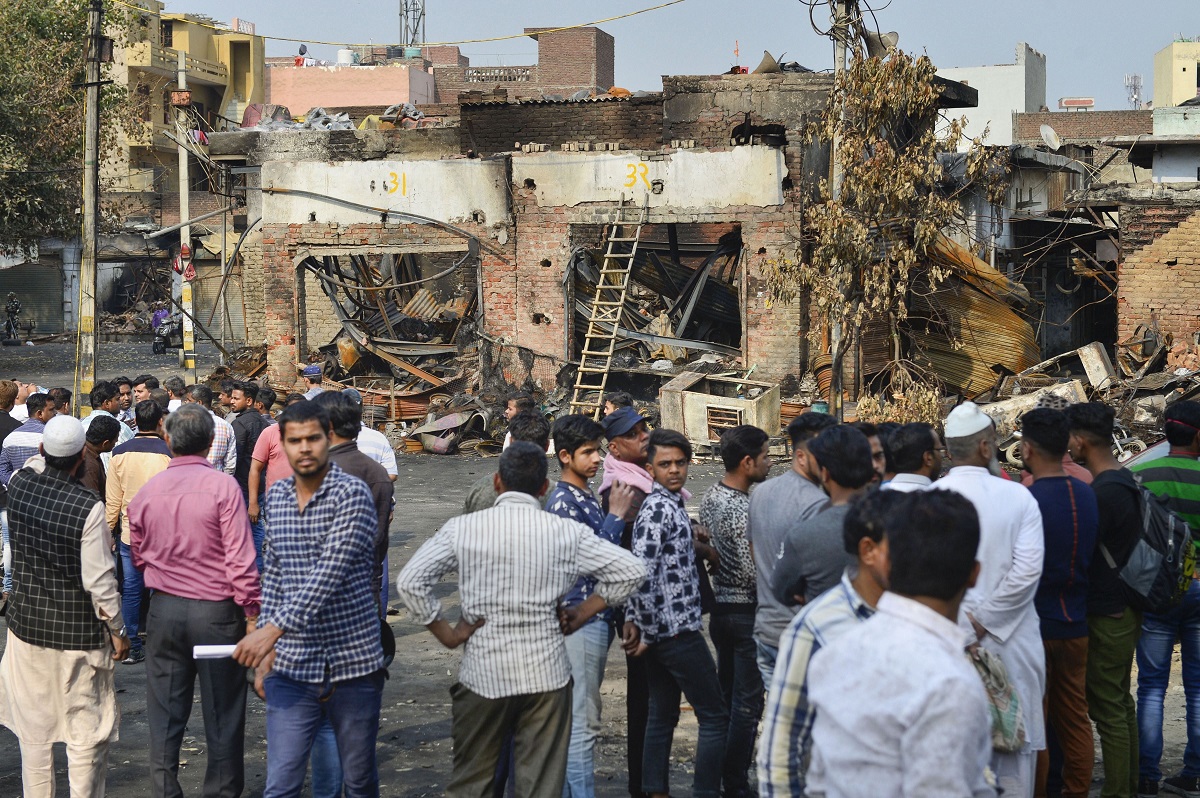 “This language to define the Muslims as a community, has been regularly used by mainstream media, and has now turned into ‘common knowledge’ about the community. The same narrative was also employed by the mob,” the report said.

Women protesters from the Chand Bagh sit-in protest site, claimed that they had been beaten up by male police officials. The police did not help or support them when the mobs were attacking people in the area.

Several women suffered grievous injuries. A pregnant woman received 35 stitches after being hit by the police at the Chand Bagh sit-in protest site. “I am pregnant, the tear gas broke right in front of me, and then I noticed men chanting ‘Jai Shri Ram’, ‘Bharat Mata ki Jai’ appear in a crowd. The police hit me, and there were some men in ‘military uniform’ also who were beating us with sticks. One policeman picked up a stone and hit me on my head, that is when I fainted. They thought I was dead, so they left me. Somehow I reached home, my head was bleeding- the police did not even allow an ambulance to come into the lane, with a lot of difficulty we reached Al-Hind Hospital where I got 35 stitches on my head. I felt so traumatized, their words kept going on in my head, ‘Hindustan Humara hai, ek bhi musalman nahi rahega yahan‘ (India is ours, not even one muslim will stay here!),” she said.

Another woman spoke about the nature of violence unleashed by the mob and how police officials were complicit in the violence. “I woke up to ‘Mullon ko maaron (Kill the Muslims!)’ and ‘Hum Denge Azaadi’ chants…In front of me, they threw acid on a young girl’s face. We tried to run as far we could, and tried to call the police multiple times, initially they did not pick up.. when they finally did, they said, ‘This is not an issue we are handling. You deal with it yourself’,” she said.

A woman, who witnessed the police dragging a minor girl, was hit on the head when she tried to protect the girl. When she regained consciousness, she saw that there were many injured women around her. “…It was then that the Police pulled their pants down and pointed their genitals towards the women stating that they wanted ‘freedom’ and they were there to give them ‘freedom’,” she said.

The fact-finding team recorded several accounts of women who had been hiding and were terrified for hours during and in the aftermath of the violence. The physical attacks, which went on for days, only amplified the feeling of being looked at as an ‘outsider’ in one’s own country, and the trauma one carries with it.

The women also spoke at length about not finding the words to explain to their children, the extent of violence and destruction that had shaken their lives, and why their books and toys were being burned.

In the Khajuri Khas area, a woman said, “I assumed I would be safe on the terrace with my children, but at a point, it became impossible for me to safeguard my children and all my perceptions were meant to be proved wrong that day. In order to save my children from stone pelting, I had to throw them from the top of a three-storey building.” She said that the spectre of hatred and the fear of being killed was still prevalent in the area.

The unabated attacks on women have continued even through the national lockdown, as the state has continued to criminalise women protesters, many of whom have been booked under the draconian UAPA.

The findings of the report have stressed on the immediate need to deal specifically with the impact of violence on women and have called for taking necessary measures to support women and child victims, including filing complaints of sexual violence against perpetrators.

Aiman Khan and Arpita Jaya are both researchers at the Quill Foundation, New Delhi.