As victims and labour rights activists question the lack of action, the police have yet to proceed with criminal charges against the owners of the factory and claim to be waiting for the forensic report.

Mumbai: At least 10 workers have died and over 70 have received very severe to minor burn injuries in a blast that occurred on June 3 in the boiler of a factory at Dahej in Gujarat’s Bharuch district.

According to locals, the boiler of agrochemical company Yashashvi Rasayan Private Ltd exploded on the afternoon of June 3. The noise from the blast could be heard as far as three kilometres.

Even two days after the incident, the police claim that they have yet to determine the main cause of the incident and the exact chemicals that led to the explosion.

Among the injured persons include several of those working inside the plant and drivers of vehicles carrying chemicals to the plant, confirmed one of the injured workers who has been hospitalised at Baroda Heart Hospital in Bharuch. The victims were moved to Baroda Heart Hospital, Healing Touch Multi-Speciality Hospital and Global Hospital in Bharuch district.

Most workers at the plant was employed on a contractual basis and had migrated from states like West Bengal, Bihar, Uttar Pradesh and Jharkhand.

One victim, who is at Baroda Heart Hospital, said that he had just entered the premises when the boiler exploded. “I drive vehicles loaded with Hydrogen. As soon as the boiler blasted, my vehicle caught fire too,” the victim said. He has suffered severe burn and has glass shard injuries on his legs, hands and abdomen. 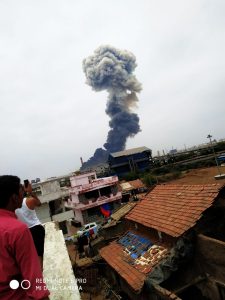 On June 3, as the blast occurred, another man, with severe burn injuries, was caught on camera by a bystander. The person, with his face completely blackened in the fire, could be seen losing his balance and seeking help. The person handling the camera could be heard asking about what happened to the injured person, who was trying hard to stand still. His skin had peeled off and clothes burnt.

“He was later taken to the hospital, where he died on admission,” said Nilesh Parmar, general secretary of the Gujarat Working Class Union. Parmar, a resident of Bharuch, has been visiting hospitals and gathering data on those who have been injured.

“Since more workers here migrated from other states, they don’t have their family members here. It is just difficult to tell how many have been injured and how many have succumbed to their injuries. The company workers have been deployed at all three hospitals to ensure the victims don’t speak to activists and journalists,” Parmar said.

The names of the deceased labourers identified so far are Pramod Yadav (26) from Uttar Pradesh, Arun Kori (19) from Madhya Pradesh, Jayant Mahato (28) from West Bengal, and Surajlal Singh Rajput (35), Munna Singh Shivprasad Singh (38), Tripurari Rai (25), Hari Darshankumar Chaudhary (20) from Bihar, Rashmikant Chauhan (35) from Ahmedabad, and Naresh Prajapati (27) from Bharuch. One person, according to officials, has to be identified.

Senior Gujarat police officials told The Wire that the investigation right now is considered as an “accidental death case” and once the forensic team ascertains the cause for death, further investigation would be carried out. Bharuch District Superintendent of Police Rajendrasinh Chudasma, in his comment to the Indian Express said, “We are carrying out the investigation as an accidental death case. The Forensic Science Laboratory, factory inspector and industry safety officials are also holding parallel probes. Once the cause of the explosion is detected, we will decide on further action. The factory owners have not yet contacted the police.”

The labour department, however, has issued a notice under section 4 (2) of the Factories Act asking for the closure of the unit until further investigation. An audit of all factories in the district has also been ordered.

The victims and labour rights activists in Bharuch have accused the police of treating the company owners with kid gloves. “The police should have questioned the owner by now and even began arrests. Instead, the police claim that the owners are yet to contact them. This is a clear case of negligence and the workers were made to work in a dangerous space without adequate safety gear. The magnitude of this incident is much larger than the police and the administration are making it to be,” Parmar said.

In all, 450 persons worked at the company and several workers have testified that almost everyone was at work at the time of the incident.

Soon after the incident, the owners of the company announced an ex-gratia compensation of Rs 5 lakh to each deceased person.

The blast at a chemical factory comes within a month of plastics-manufacturing plant LG Polymers, in Visakhapatnam, Andhra Pradesh, leaking poisonous gas that soon spread to five villages nearby. The gas, believed to be a toxin of some kind, made over a thousand people sick and 12 people died.