With only those with 'special official permission' allowed to use the highway, described as lifeline of the Valley, the government's ban saw an entire state come to a standstill on Sunday.

Stranded tricks on the Jammu-Srinagar highway on April 7, 2019. Credit: PTI

Srinagar: Stuck inside a cab with her children, aged two and five, Rafia Jan pleaded with the forces to allow them to go home. The family had arrived on a Sunday morning flight to Srinagar from New Delhi, and was on its way to Anantnag when their vehicle was stopped at a bypass crossing.

They did not have the “special official permission” or qualify among the “exempted categories” allowed to travel on the state’s principal highway. Their joy at being home was replaced by frustration. “They (the forces) are telling us that civilian traffic will be allowed only after 5 pm,” Jan sighed, attending to her two kids.

At a barricade ahead of their car, a group of travellers, including an elderly man with long grey beard, argued with men in uniform, demanding to be allowed to move towards their homes.

“We had no idea about this ban otherwise we would have preferred to travel on some other day,” Jan murmured. “How can I wait in this car until 5 pm with my little children.”

Last week, an order from the governor’s administration banned civilian traffic on the highway, from Udhampur in Jammu to Baramulla in northern Kashmir, for two days a week. Form 4 am to 5 pm, every Sunday and Wednesday, the 200-km stretch is reserved for military and paramilitary convoys. 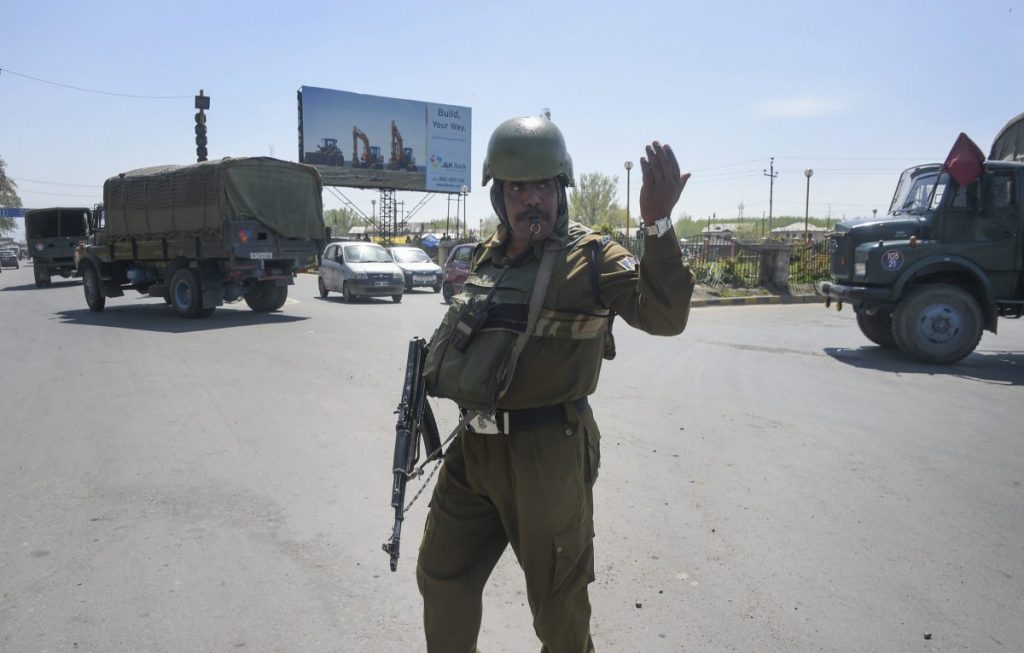 The highway, described as lifeline of the Valley, crisscrosses through five districts of Anantnag, Pulwama, Srinagar, Budgam and Baramulla.

The impact was visible all along the Srinagar stretch of the highway, from the bypass to Qawarwari Chowk, as people of all ages were seen walking on foot to their destinations.

In Rafia Jan’s car, the kids were already growing restless. The elder child, a boy, was bouncing from one spot to another, and the younger one was wailing. “This is tyranny. Can’t they see she has two little kids,” an elderly man wearing a formal suit said angrily. He too had been stopped at the crossing.

Scores of passengers across Kashmir, including patients who need to reach hospitals in the city, were stuck in the highway lockdown.

‘Situation is bound to worsen’

Although the occasional private vehicle passed on the Srinagar highway, the link roads connecting it had been sealed in the morning, at Pahroo-Nowgam Chowk, Chanapora, Sanat Nagar, Tengpora, Bemina and Qamarwari. The forces put up barricades and sealed the road stretch with concertina wires. No civilian vehicle was allowed to cross without permission.

At most of these intersections, commuters were in heated argument with forces. “An entire population has been caged,” a passenger who identified himself as Aijaz Ahmad told The Wire at Tengpora Crossing. “This can only make the situation worse in Kashmir.” Security personnel stop a car for checking on the Jammu-Srinagar-Baramulla highway on April 7, 2019. Credit: PTI/S. Irfan

He questioned the rationale behind the decision. “If a person is injured in an accident, do they want him to first get permission from authorities to reach hospital? It seems a colonial and dictatorial rule,” he said.

Late on Saturday evening, the government issued a list of magistrates, along with their mobile numbers, responsible for manning the highway in five districts of Kashmir. Passengers were asked to contact them in case of emergency.

In a statement issued Sunday evening, the government termed the “arrangements” that were put in place for “convenience” of people on the highway as “quite successful”.

The government statement said that special permission was given to just 493 vehicles in the exempted categories, over the entire day. On a normal day, over 10,000 vehicles each hour use the highway (over its full length), according to the Indian Express.

The government also acknowledged that on day one of the highway ban, people had to use “alternate roads” including old highway and “other internal routes” to commute and reach Srinagar – not conveying the hardship of being cut off from their province’s lifeline.

For many, however, the arrangement had already failed. In the premises of Lal Ded hospital, the lone tertiary-care maternity hospital in Kashmir, Shameema Bano from Pattan in Baramulla was waiting for her son to bring a home-cooked lunch to her daughter who had given birth a few days ago.

“Yemen paya trath (May they face God’s wrath),” she said. “My daughter hasn’t taken anything since morning. We had prepared soup for her at home but my son told me on the phone that forces are not letting him to take out the car.”

Hundreds of villages, from Anantnag to Baramulla, are located beside the highway. While there was thin traffic movement on the Srinagar highway, local reports said the route was completely deserted in southern Kashmir, people shut inside their homes.